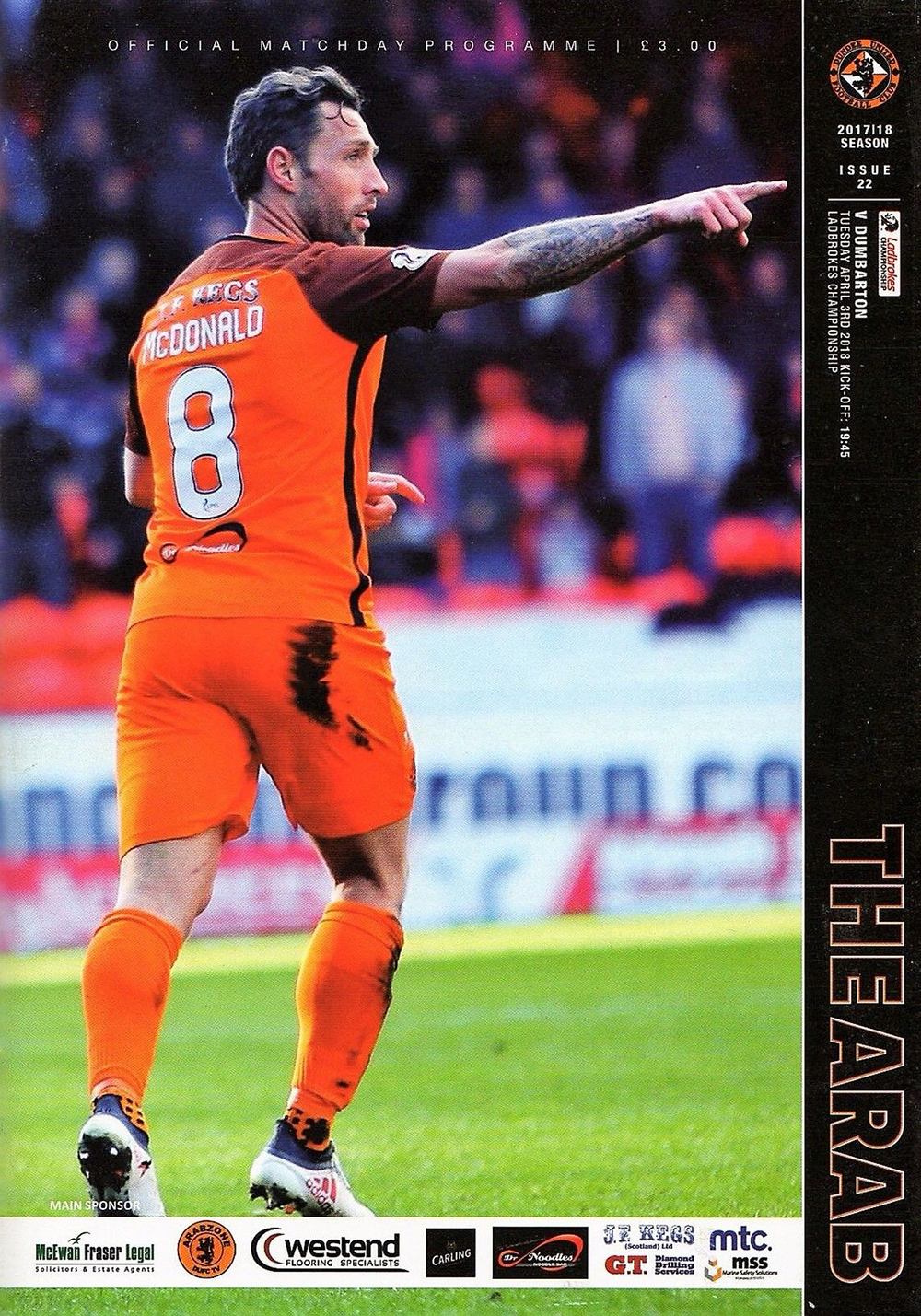 After suffering a late equaliser against Morton in their last game, Dundee United finally got a much-needed win with a 2-0 victory over Dumbarton at a soggy Tannadice. Due to a massive rainstorm on the day of the game, the match was in doubt until a pitch inspection 90 minutes from kick off. United were glad that the game did go ahead as they managed to get their first home win since the 2nd of January and their first clean sheet in the league since the 13th of January.

Rather going against the pattern of previous games, Csaba Laszlo named an unchanged starting line up from that 1-1 draw at Cappielow, although there were a couple of changes on the bench as Thomas Mikkelsen and Jamie Robson came in for Brandon Mason and Paul Quinn. Due to a combination of the conditions and United’s poor form, the game took place in front of a mere 3620 spectators, which was United’s lowest league attendance at home since 1981.

Despite the disappointment of conceding an equaliser in Greenock with the last kick of the ball in their last match, United took the game to their opponents, who had been on a bad run of form themselves. The first chance came after five minutes when Sam Stanton had a shot from just outside the penalty area but the ball sailed wide. A minute later, United had a significantly better chance through Paul McMullan as he received the ball from Stanton on the corner of the penalty box. The winger cut inside on his right foot and curled a delightful effort which only just went past the left-hand post of Dumbarton goalkeeper Scott Gallacher.

In the 16th minute, Scott McDonald became the latest United player to have a shot on goal, but his 25-yard shot was blocked on the edge of the area and the danger passed. A minute later Dumbarton threatened for the first time as a defence-splitting through ball was played by Kyle Hutton to Callum Gallagher, who briefly looked like he would get to the ball before United keeper Harry Lewis. However, Lewis raced from his line and got to the ball just before the hesitant Dumbarton striker to clear the danger. Gallagher had another chance three minutes later, and again it was due to a through ball which split the United defence, but on this occasion Bilel Moshni was able to track his run and snuff the chance out before the Dumbarton player could get a shot away.

United seized the initiative and after 26 minutes McDonald was unlucky to see a low shot go just wide. The home side finally took a deserved lead on the half hour mark when McDonald threaded the ball through to Paul McMullan on the edge of the area and the winger drilled a low shot into the back of the net past a helpless Scott Gallacher. Dumbarton responded well to the goal and arguably should have equalised three minutes later through the lively Callum Gallagher. The striker fashioned himself some space inside the United box but his shot was straight at Harry Lewis. United hit back through a break from Tony Ralston, as he hit a first time shot from the edge of the area which was blocked. The rebound came back to the Celtic loanee and his subsequent attempt on goal was deflected wide for a corner kick. The home side them spurned a great chance as Willo Flood won the ball in midfield and drove towards goal. He seemed to have a clear shot on goal but elected to pass to Scott McDonald instead, whose floated effort was saved easily by Scott Gallacher. Dumbarton had another chance on the break in the 40th minute as David Wilson broke from the United left, but Lewis was again able to smother the Dumbarton player’s shot.

Billy King was the next to threaten the Dumbarton goalkeeper one minute from half time as he hit a swerving shot from outside the area which was well saved. However, United did get a second goal on the strike of half time. After having the ball passed to him on the right by Willo Flood after the Irishman had again made a driving run from midfield, Paul McMullan crossed the ball into the box where he found Bilel Mohsni. The big defender initially seemed to have lost control of the ball but battled to win it back before stabbing a low shot into the net from close range.

The second half was much less eventful as United, perhaps unsurprisingly given their recent bad run, sought to see out the game. Four minutes into the half Flood gave Mohsni the chance to double his tally for the evening, but the defender narrowly missed the cross from the Irishman. McMullan then had another attempt on goal saved by Scott Gallacher, this time a low shot from 20 yards out.

Ten minutes into the half, Harry Lewis nearly gifted Dumbarton a route back into the game as he got himself into a muddle while trying to clear a passback. The keeper was able to recover the situation by somehow collecting the ball before Danny Handling was able to get onto the loose ball. United them wasted another chance as a great one-two between Sam Stanton and Scott McDonald sent the former Dumbarton player through on goal, but he sent his shot well over the bar from six yards out with Gallacher looking well beaten. United had a further chance with 20 minutes to go when Scott McDonald smashed the ball towards goal after some pinball in the Dumbarton penalty area, but Scott Gallacher was able to add to his impressive array of saves by somehow deflecting the ball wide. Four minutes later, Billy King became the latest United player to be thwarted by the Dumbarton keeper as his fierce shot was parried, before substitute Craig Slater’s shot was well held by the impressive goalkeeper.

United were content to control possession from them on, playing in a rather risk averse fashion to protect their lead, although they were able to create another great chance late on which, not for the first time this evening, really should have been taken. After breaking clear down the left-hand side, Billy King cut back the ball to the unmarked Paul McMullan, However, McMullan could only fire the ball over the bar from close range, the chance was gone and United were forced to settle for a two-goal win when it could, and probably should, have been much more.

The win took United above Morton and back into the Championship playoff spots, still with games in hand over the surrounding teams ahead of their game away to the same opponents on Saturday. Despite their profligacy, United will have been pleased to finally get a win and give their push for a playoff place some badly needed momentum. 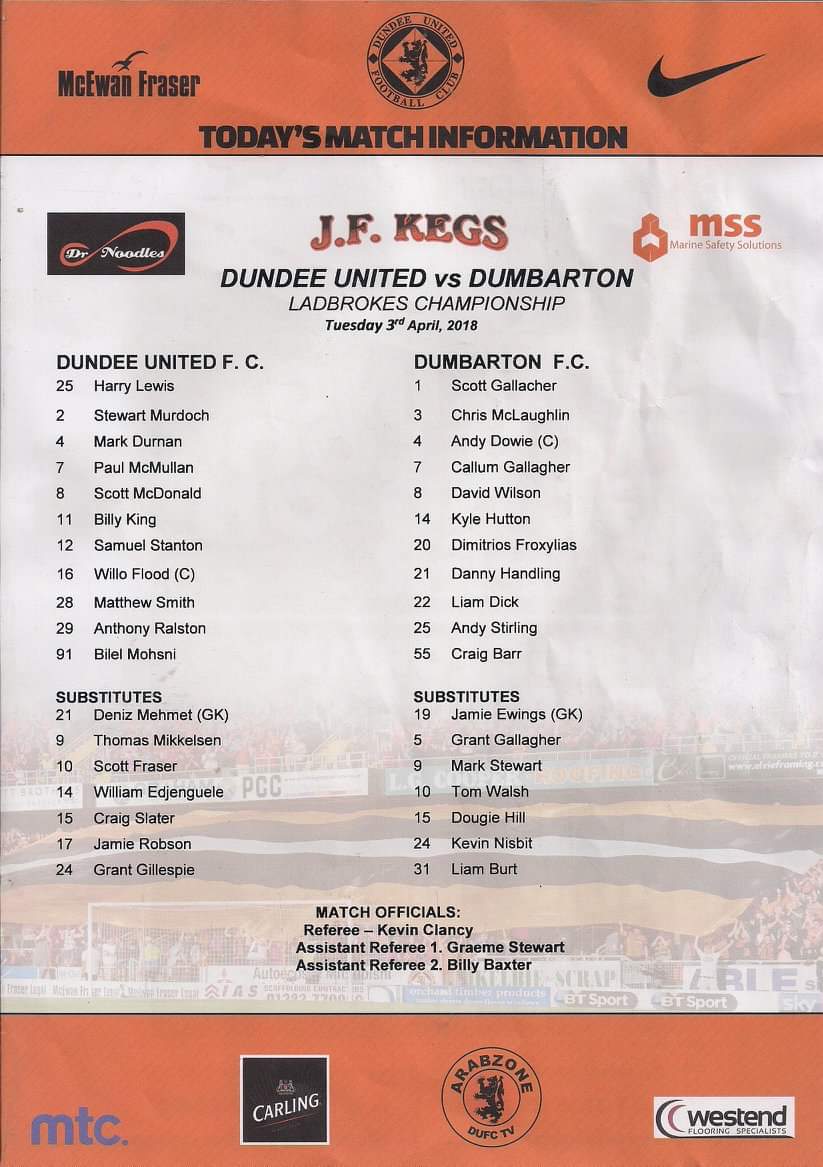