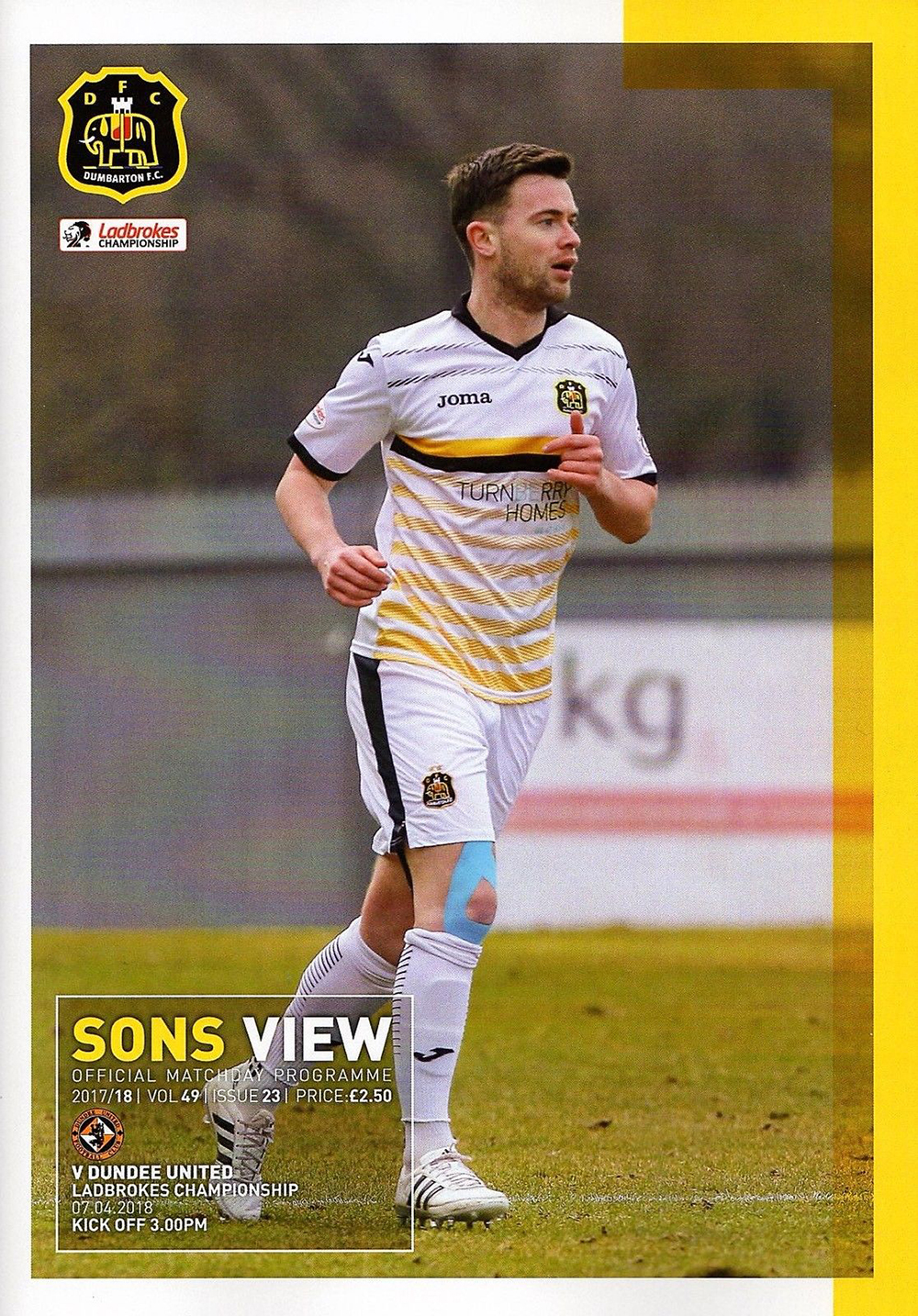 United lost further ground in the race for the playoffs with a desperately disappointing 3-2 defeat away to Dumbarton. After the previous Tuesday’s 2-0 home win over the same opponents, Csaba Laszlo only made one enforced change to the starting line up as Tam Scobbie replaced the injured Mark Durnan. There were a couple of changes among the substitutes where Josh Donaldson and Brandon Mason replaced Scott Fraser and Deniz Mehmet.

It was a low key start aside from an early booking for Willo Flood for a late challenge on Andy Stirling, but the match came alive after ten minutes. After wasting a few chances on Tuesday night, the last thing Dumbarton would have wanted was to do so again in this game, but after 10 minutes a great chance was wasted as Danny Handling failed to hit the target when he found himself in space around ten yards from goal after being set up by Calum Gallagher. However, on this occasion the miss would not prove costly. The opening goal came for the home side a minute later and it was a deserved lead. Andy Stirling crossed the ball from the left to the back post where Tom Walsh knocked the ball across goal. The cross from Walsh should probably have been cut out, firstly by Harry Lewis and secondly by Tam Scobbie, who could not sort his feet out and the ball trundled past him to where Calum Gallagher was waiting at the back post. The Dumbarton player gleefully exploited the United defence’s generosity by bundling the ball into the net from not much more than a yard out. Gallagher had missed a few chances in the Tuesday night game at Tannadice, but he could hardly fail to convert such a gilt-edged chance. Remarkably, Gallagher’s goal was the first time Dumbarton had scored a league goal against anyone other than Brechin City since Boxing Day, a run stretching back almost four months.

The home side continued to create the chances, and Gallagher nearly scored a second on 18 minutes as the ball arrived at his feet in the penalty area, but he was unable to sort out his feet and get the shot away that surely would have doubled Dumbarton’s lead. Chris McLaughlin was the next to threaten the United goal with a long range free kick, but Harry Lewis was able to save his attempt. Two minutes after that, Lewis was forced to make another save, this time from Andy Stirling’s low shot.

It was not until the 25th minute when United had a shot on goal, and even that was a speculative effort from Matty Smith which was deflected wide for a United corner, which was to come to nothing. Paul McMullan had a shot blocked by the home defence a couple of minutes later, and then had a shot deflected over the bar on the half hour mark as United finally began to create chances. Scott McDonald hit a low shot just wide on the 37th minute as United began to exert some pressure on the home defence, who were able to stand firm.

As the half drew to a close, a few more chances came United’s way. Five minutes from half time, Matty Smith did well to unleash a shot from the edge of the penalty area but Scott Gallagher, who had thwarted United on Tuesday night with a string of good saves, again came to Dumbarton’s rescue with a good block. Paul McMullan then was prevented from equalising by a great block from Liam Dick after being fed by a Matty Smith pass a minute before half time. It was a half in which United had started abysmally but finished well, although they had thus far been unable to break down a resolute Dumbarton side.

United started the second half much the better side, and after two minutes of the half Tony Ralston was denied after his goalbound shot was deflected wide by Liam Dick. However, Tony Ralston was not to be denied for long and soon after he netted his first goal in United colours as he headed Billy King’s superb cross past Scott Gallacher to draw the away side level, which on the balance of play was just about deserved. United wasted a good chance to given themselves the lead ten minutes into the second half when Willo Flood was set up by Paul McMullan, but the United captain’s first touch was poor and the ball drifted out for a goal kick to the home side.

Just short of the hour mark, the home side restored their lead. From a corner kick from the left-hand side, the United defence stood and watched as Craig Barr rose unchallenged and powered a downward header past the helpless Harry Lewis. Not for the first time, Dundee United’s inability to defend set pieces had cost them, and it was to cost them again later on in this game. It could have been 3-1 soon afterwards as Tom Walsh drove forwards from midfield but he perhaps shot too early, unleashing an effort from outside the box which was comfortably saved by Harry Lewis.

With twenty minutes to go, United equalised for the second time. Tony Ralston, who was without doubt United’s best player on the day, made a driving run down the right and his cutback was perfectly weighted for Scott McDonald to tap in from close range. United went on the hunt for a winner and a fierce shot from Paul McMullan hit the side netting on 74 minutes, much to the disappointment of the away support who had thought on first viewing that the ball had hit the inside of the net.

Despite the pressure from the away side, when the fifth goal of the match came with ten minutes to go it came for the home side. After a shanked clearance from Tam Scobbie led to an unnecessary Dumbarton corner, when that corner was half cleared David Wilson was able to cross the ball back into the box, where despite the presence of four United defenders Craig Barr was one again able to head the ball past the stricken Lewis. It was Dumbarton’s third lead of the day, and this time it was a lead they would not relinquish. The result was another blow to Dundee United’s hopes of qualifying for the Championship playoffs, with a tough game against champions elect St Mirren to come. 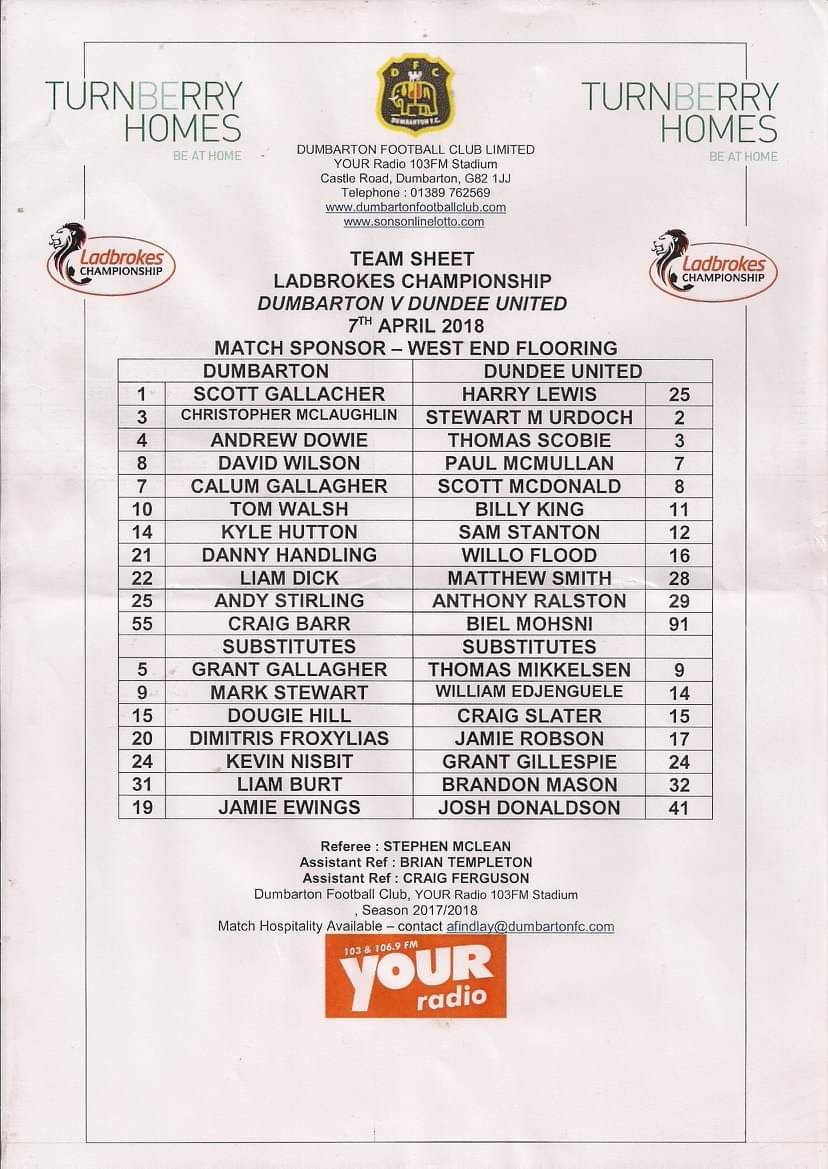