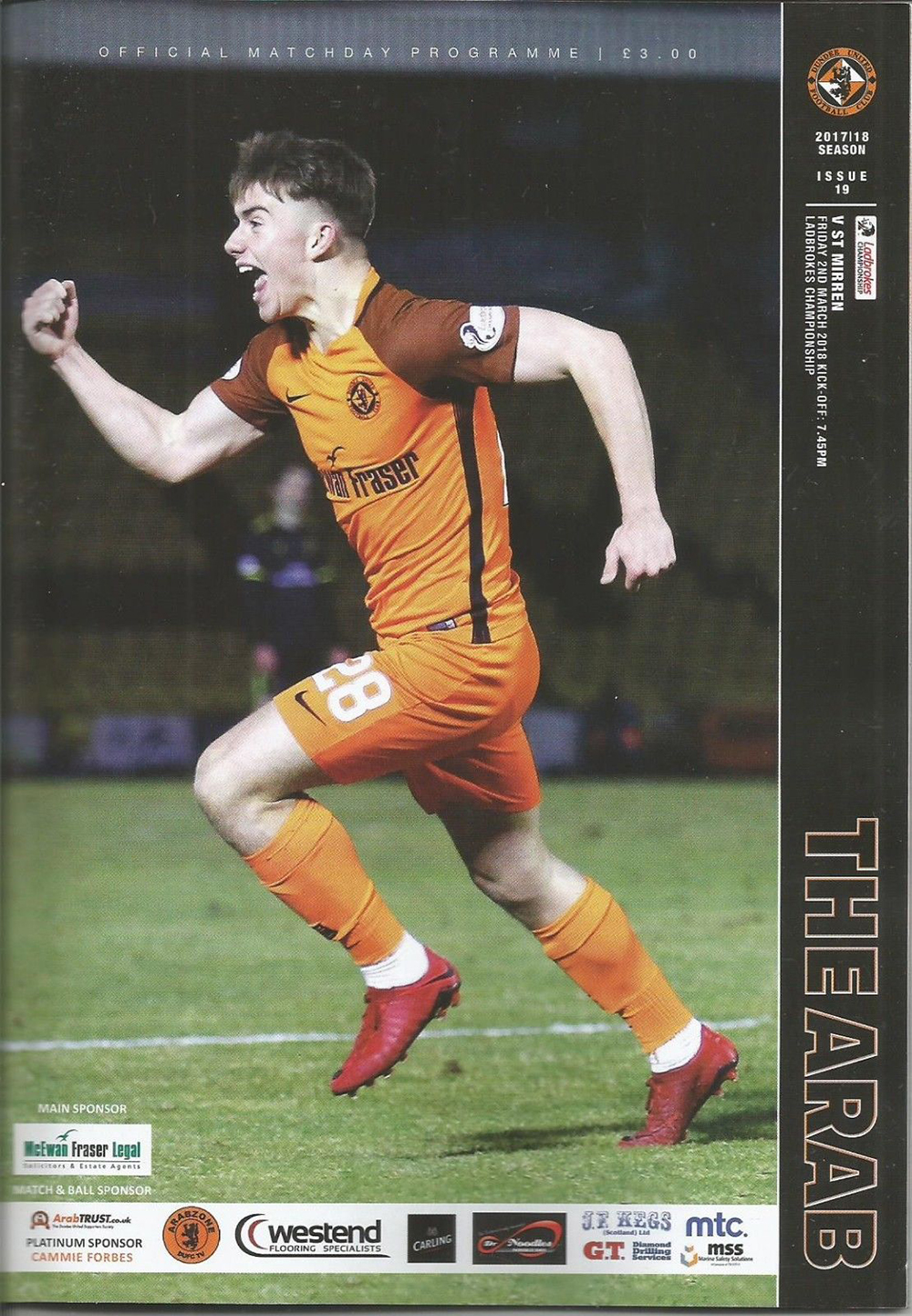 United reignited their season with an impressive and hard fought 1-0 win over Championship champions elect St Mirren. After the 3-2 defeat at Dumbarton in their previous game, manager Csaba Laszlo made four changes to the starting line up for what was a huge game for both teams. Deniz Mehmet, Mark Durnan, Grant Gillespie and Thomas Mikkelsen came into the starting eleven, with Harry Lewis, Tam Scobbie, Matty Smith and the suspended Scott McDonald dropping out.

St Mirren only required a draw to confirm that they would be 2017/18 Championship league champions and a large and boisterous away support of over 2000 fans made the journey from Paisley in the hope that their team would get the point they needed. United were in dire need of a win after their recent poor set of results had meant that qualifying for the championship playoffs, which looked almost certain a few weeks earlier, was suddenly beginning to look at risk.

If confidence was low among the United ranks, the players alleviated that in the best possible way by taking the lead in the third minute of the game. Paul McMullan stole in ahead of Liam Smith on the United left and played the ball across the box to Billy King who steered the ball into the net past St Mirren goalkeeper Craig Samson to give United an unlikely lead.

St Mirren were always going to react to that goal, given their talent and the importance of the occasions, and came close to equalising five minutes later when, after former United loan player Cammy Smith had been fouled 25 yards from goal, the resultant free kick from Kyle Magennis went just past the post. At the other end, on 14 minutes United had a great chance to double their lead with a curling shot from Paul McMullan, but Buddies defender Gary Mackenzie was on the line to nod the ball away.

Despite that chance, it was the away side who were having the bulk of possession, and it was no surprise that they were causing United problems, beginning with a Stephen McGinn pass that released Lewis Morgan who drove into the box, but his shot on goal was blocked by the United defence. Next to try his luck was Adam Eckersley, who had scored a spectacular goal when the sides last met at Tannadice. McGinn played the ball into the path of Ryan Flynn, and he found Cammy Smith driving forward. Smith passed to Eckersley who was breaking down the left-hand side, and his shot from a tight angle skimmed the United woodwork and went over. The full back was involved again a couple of minutes later when his dangerous low cross was turned behind by Willo Flood. The resultant corner kick was met by the head of Gary Mackenzie but Stewart Murdoch was able to block the header at the back post and scramble the ball clear.

St Mirren hit the United woodwork for a second time on the half hour mark when Cammy Smith knocked the ball down the right to the overlapping Liam Smith. He played a low ball into the area where Danny Mullen flicked the ball towards goal, but the ball hit the underside of the bar and the follow up from Lewis Morgan was blocked. Soon afterwards, there was a bit of a melee after a poor challenge on Flynn by Thomas Mikkelsen, who was correctly booked. St Mirren captain Stephen McGinn was also booked for his reaction to the challenge. Paul McMullan was then booked for a foul on Liam Smith as United attempted to stop their opponents from playing by any means necessary.

As the an increasingly tetchy first half drew to an end, with United’s physical approach evidently beginning to irritate the St Mirren players, Mark Durnan became the latest United player to concede a free kick when he fouled Mullen 35 yards from goal. However, the set piece from Lewis Morgan went well over the bar and ensured United had the lead at half time.

St Mirren started the second half well and came close to being gifted an equaliser three minutes into the half when Bilel Mohsni was forced to head the ball over his own goal, a header which came a little too close to dropping under the bar for comfort. The away side did have a half-hearted penalty claim a few minutes later for an alleged handball by Mohsni, but the claims were waved away. While the Buddies were able to force a few corners and free kicks, the pressure did not result in any clear-cut chances and by and large the United defence were able to deal with anything which was being thrown at them. The home side began to create chances of their own at the other end, ensuring that for all of St Mirren’s possession and threat, Craig Samson was the busier of the two goalkeepers. He should have been tested a lot more on the hour mark when a Paul McMullan corner found an unmarked Thomas Mikkelsen, and the Danish striker should have done a lot better but could only head the ball wide of goal. The same player did test Samson a few minutes later with an angled drive which the St Mirren goalkeeper did very well to hold on to.

United had their best chance to seal the points after 75 minutes when Billy King wriggled clear of the St Mirren defence and pass the ball through to Sam Stanton. He found himself one-on-one with Samson but the St Mirren goalkeeper was able to make a strong save to thwart the United player.

St Mirren brought on John Sutton and Myles Hippolyte as they threw everything at United in an attempt to get a league-clinching equaliser. In the end, despite continuing to pile the pressure on the United defence, the home side stood firm and restricted St Mirren to few chances. The away side resorted to a lot of long balls in an attempt to force the issue, and one of those long balls led to a great chance three minutes from time. The ball found John Sutton in the United box, but Deniz Mehmet was able to block the ball and the danger was cleared. That was the final chance, as the away side began to rather run out of ideas outwith those long balls forward, as well as long throws from Hippolyte.

The final whistle blew to confirm United’s victory, which was their first home win since the 2nd of January. It also meant that St Mirren would have to wait at least a few more days to have their title confirmed. It had been a vastly improved performance from United, arguably their best of the season, although it was tempered by the question of how different the season could have been had that level of performance been evident during the preceding few months. 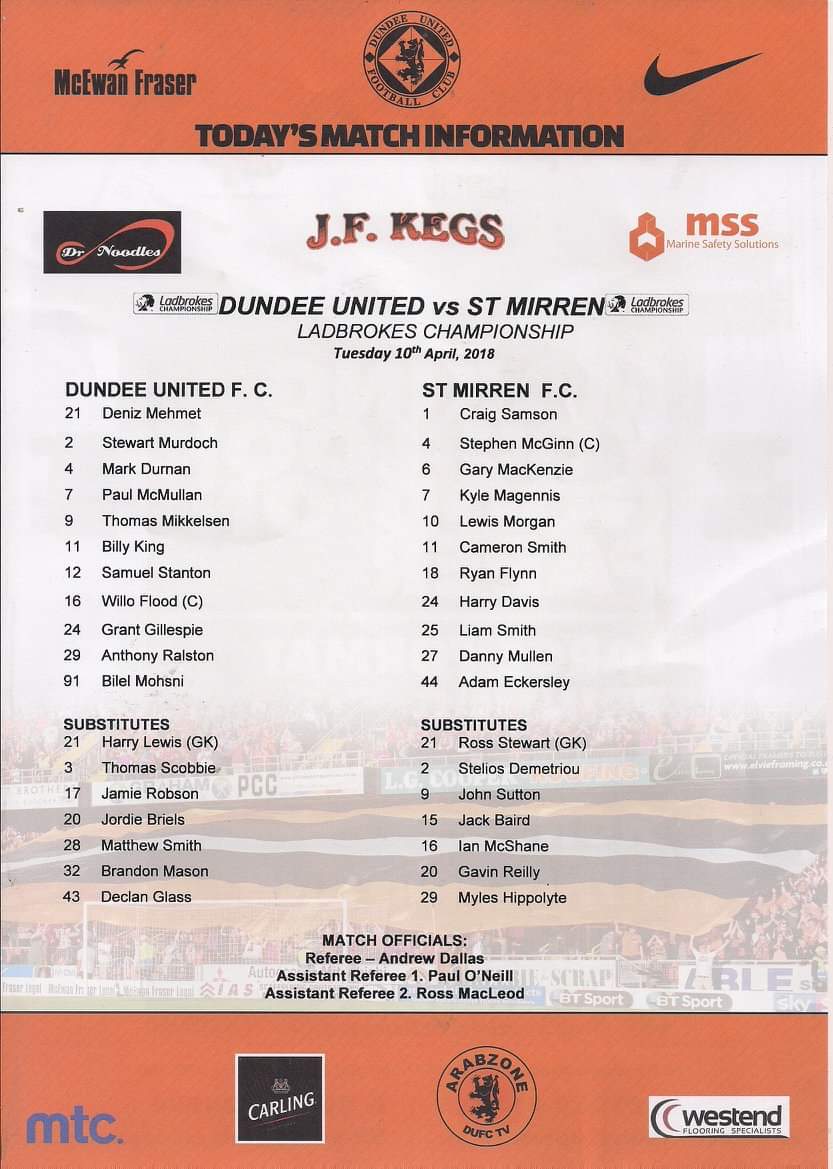