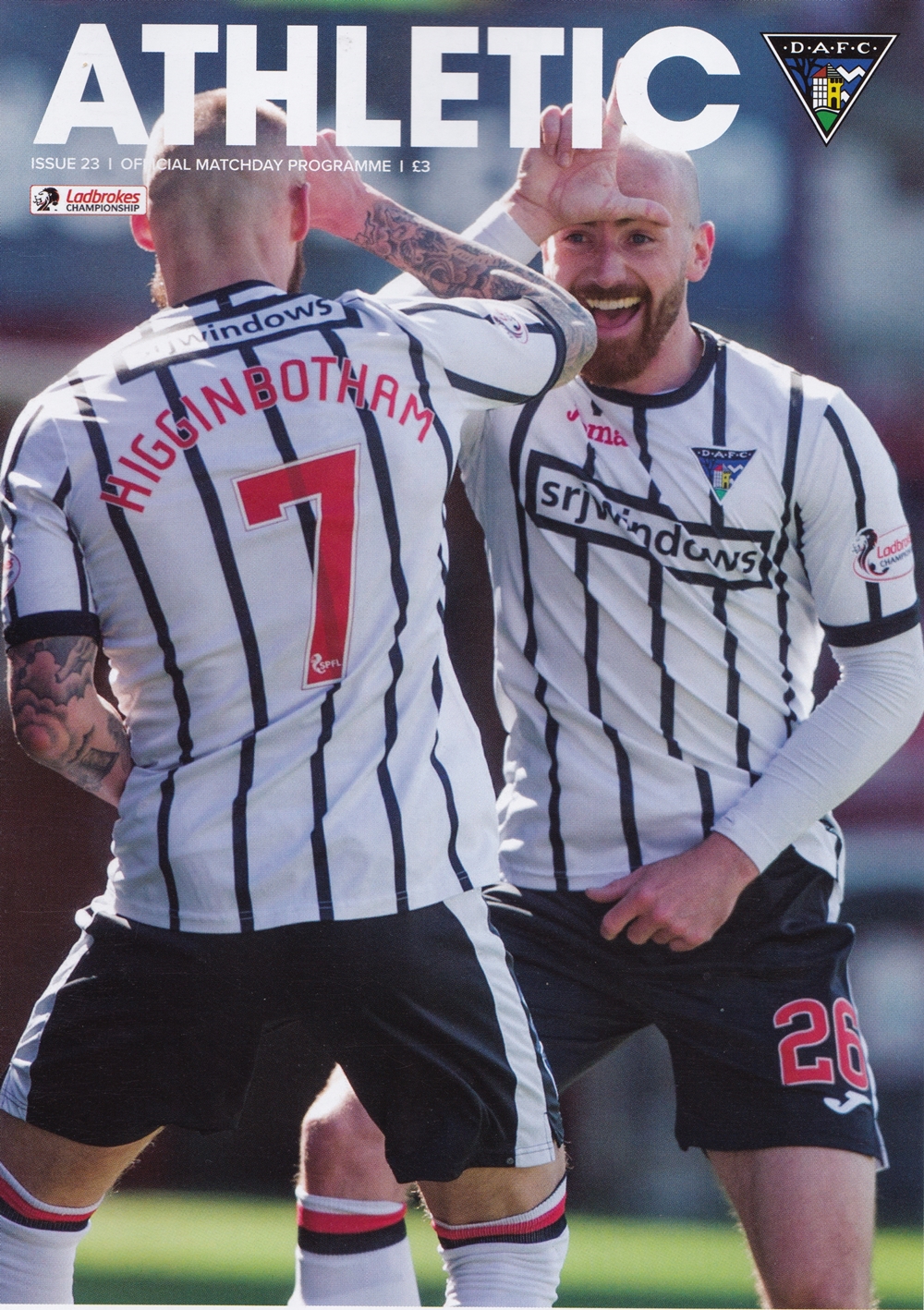 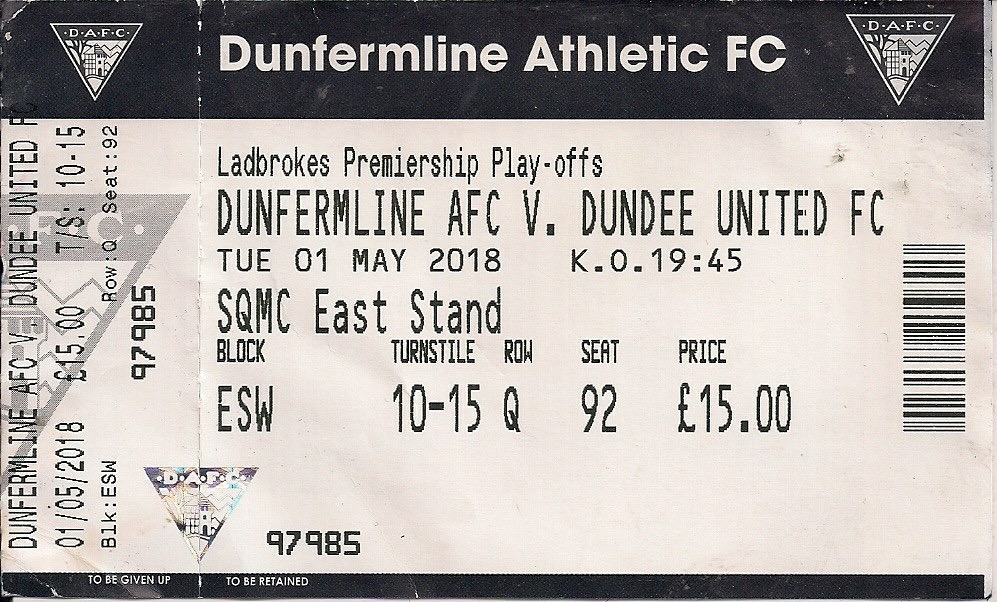 The first leg of the Premiership quarter final playoff between Dundee United and Dunfermline at East End Park finished with no goals. Despite the scoreline this was an interesting and at times controversial game. The draw meant that Dundee United continued their impressive run of not having lost at East End Park since 2007, and in addition this was their 14th straight game without defeat against the Pars.

There were two changes to the starting line up from the team which had beaten Livingston in the last game of the regular league season, with Willo Flood and Thomas Mikkelsen brought in to replace Craig Slater and Sam Stanton, both of whom dropped to the bench.

Although they did have a poor recent record against United, Dunfermline had not lost in their previous ten league games and started the game well. Their first threat came after four minutes with a cross from the left by Lewis Martin which just evaded Andy Ryan at the back post. Within a minute, an almost identical situation occurred at the other end, with a cross from Tony Ralston sailing just beyond Thomas Mikkelsen. Ralston created another good chance a minute later when he fed Scott McDonald on the edge of the box. McDonald played the ball straight back to the Celtic loanee, but he could not quite take the ball in his stride and the chance was gone. Ten minutes into the game, a break down the left from Fraser Aird looked promising for the home side, but again the cross was overhit and the chance was gone. Soon afterwards a mix up between Deniz Mehmet and Bilel Mohnsi nearly created a chance for Dunfermline, but the defender was able to boot the ball clear before a lurking Nicky Clark could capitalise.

Dunfermline kept up the pressure, and a driving run into the United box by Kallum Higginbotham became the latest problem for the United defence to deal with. On this occasion, only a superb interception from Mohsni prevented the Dunfermline winger from getting a shot away. It had been a frantic start with the Pars definitely having the better of the early exchanges, albeit without forcing Deniz into making a save.

Andy Ryan was forced off through injury after 25 minutes and was replaced by Declan McManus. However, McManus had caused United significant problems in the previous games between the teams, so in a strange way it was perhaps not the blow it initially appeared to be. The substitute nearly got onto the end of a ball across goal from Nicky Clark a couple of minutes later, but again the ball was agonisingly out of reach.

United had their first real chance on the half hour mark from a free kick after Scott McDonald was fouled by former United player Callum Morris. Scott Fraser played the free kick into the box and the ball was half cleared to Grant Gillespie 20 yards out, who fired the ball well over the bar. Five minutes after that Dunfermline had a free kick of their own at the other end when Mohnsi rather mistimed a challenge on McManus and fouled the Dunfermline player around 22 yards from goal. Fraser Aird took the free kick and curled the ball less than a yard over the bar.

The home side came even closer to breaking the deadlock two minutes later and it was another Aird cross from the left which caused all the problems. The Canadian international’s cross was headed towards goal by McManus, but the striker’s header looped over Deniz and off the bar. Soon after Dunfermline threatened again when a corner kick was only half cleared, and James Vincent shot over from the edge of the box.

On the stroke of half time Billy King squandered a good chance after getting the break of the ball in the Dunfermline penalty area, but he miscontrolled the ball and the chance was gone. There was still time for Scott Fraser to have a shot towards goal deflected wide after being set up by Thomas Mikkelsen, and despite Fraser’s claims of handball a corner kick was all that referee Bobby Madden awarded. The kick came to nothing and the first half ended goalless.

The second half saw the home side continue to boss things, and in the early stages of the half Deniz Mehmet was forced to make an excellent save from a Declan McManus header. The United goalkeeper made an equally impressive save a few minutes later to tip a curled Fraser Aird shot over the bar. It looked like United would have to weather a storm, but they got a huge break ten minutes into the half as Dunfermline were reduced to ten men. Lee Ashcroft fouled Scott McDonald as the striker tried to burst through on goal. Although McDonald was over 30 yards from goal, and there were covering defenders, Bobby Madden deemed the challenge worthy of a red card, to the evident shock of the home players. Kallum Higginbotham was booked for his protests. Scott Fraser curled the resultant free kick just over the bar.

United upped the tempo as they sought to make the most of their man advantage. Fraser in particular thrived with the increased time and space he had been given, and a couple of minutes after the red card he was unlucky to see an angled drive fly just wide of the post. On the hour mark, Scott McDonald looked like he had opened the scoring after meeting a Thomas Mikkelsen cut back, but somehow Lee Robinson got down to parry the ball wide from almost on the line. The Dunfermline keeper was able to easily hold a header from the same player from the resultant corner.

Deniz pulled off another impressive save of his own soon afterwards, and this was perhaps the best of the lot as he somehow managed to claw away a Nicky Clark header. Sam Stanton came on after 69 minutes for Grant Gillespie, and nearly scored with his first touch as he saw a shot deflected wide. Tony Ralston had a shot blocked by Nicky Clark on the goal line from the resultant corner kick as United sought to take a valuable lead.

After 72 minutes, Billy King broke through but was forced wide by Lee Robinson and Jason Talbot was able to deflect the ball wide for another corner, from which a Stewart Murdoch header was blocked. Nicky Clark again threatened at the other end as he beat Bilel Mohsni but again he was thwarted by Deniz as the goalkeeper was able to smother the ball before he could get a shot away. On the 79th minute a Scott Fraser corner was hit towards goal by Mohsni, but again Robinson was able to save.

There was a sense in the last ten minutes that both sides were content to play the game out and take the 0-0 draw, which was maybe surprising given United had a man advantage. Although the away side had a lot of the ball in the last few minutes, they seemed happy to retain possession and not commit too many players forward for fear of being caught on the counter attack. The game rather petered out and a goalless draw was the result.

Although United would certainly have taken a draw before the game, the result felt slightly disappointing given they played over half an hour against ten men. It left the tie well and truly in the balance for the second leg at Tannadice. 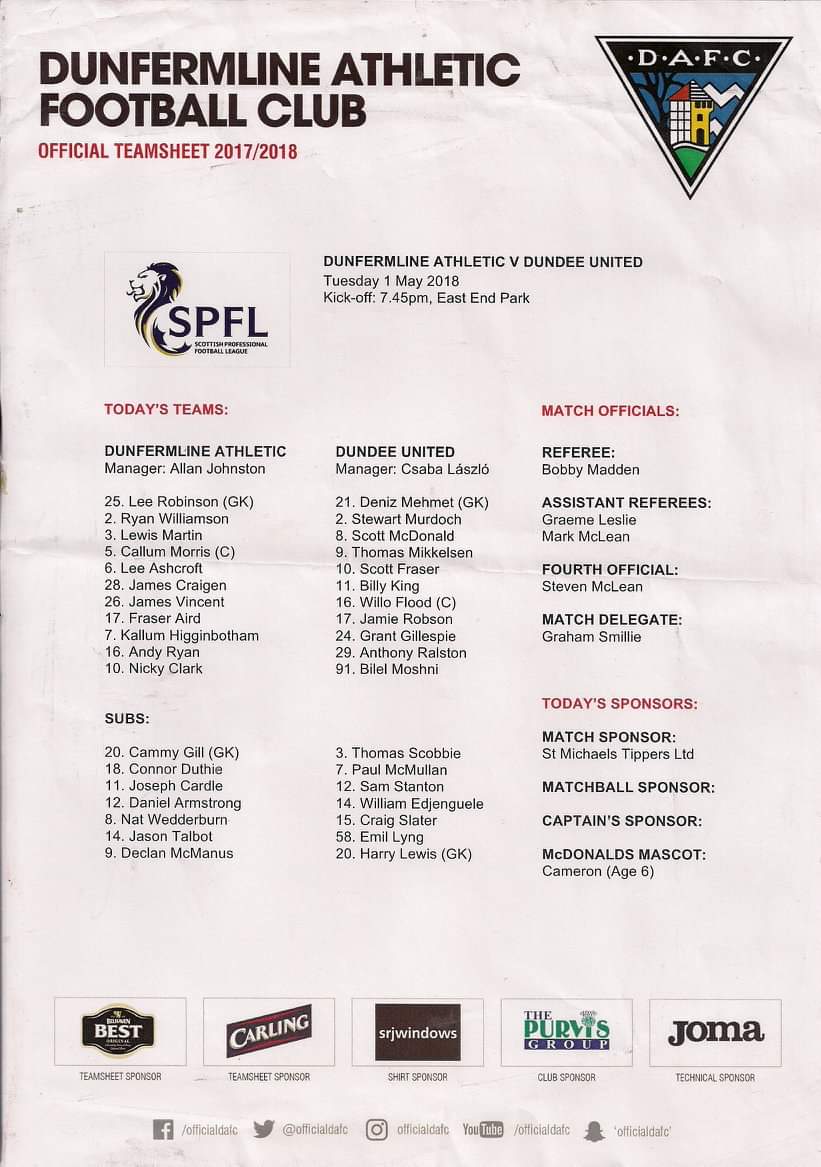