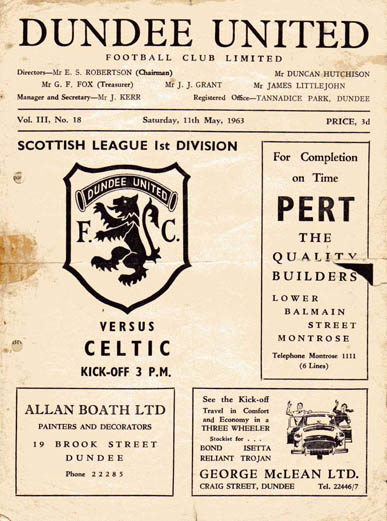 The season had been extended to cope with a winter, which had seen United, along with many others, manage only a handful of games in a 10 week period. Our encounter with Celtic had been one of those victims and consequently, only 12,000 were attracted to the re-arranged match, which for United only pride was at stake, whilst Celtic could well have had more than just an eye on the following Wednesday's cup final replay with Rangers.

Denis Gillespie set the pattern of the game, right from the whistle. Within the first two minutes, he had three great shots, it was appropriate then, that Denis, should put United on the victory path with the opening goal. Frank Haffey had been the hero of the Celtic rearguard, but even he could do nothing about Dennis Gillespie's raging shot, eleven minutes from the interval. In fact, in that period, United had an overwhelming supenority — around 15 good shots on target — and should really have been further ahead by the break. Wattie Carlyle had one quite amazing miss a couple of minutes after Denis's score. Eric Brodie chipped the ball to the winger's feet just six yards from goal, with Haffey out of position, Wattie somehow spooned the ball over the bar.

A series of great moves early in the second half still brought United no reward, but at last a second goal followed in the 57th minute. The ball sped from Gillespie to Mitchell to Irvine and finally to Eric Brodie who gave Haffey no chance with his scoring effort. Wattie Carlyle went on to make amends for that first half miss, 17 minutes from the end. Stuart Fraser and Jimmy Briggs combined on the left, Eric Brodie's spinning cross was punched out, but only as far as Wattie Carlyle, who was lying handy to score easily. That completed a victory which could easily have been so much greater, as one Sunday newspaper put it, "Celtic were so out-played that a 6-0 defeat would not have been out of place." It obviously had its effect on the Parkhead men because Rangers went on to lift the cup the following Wednesday with a similar score-line. To highlight the level of the United performance we feel that we can do no better than quote the Scottish Sunday Express which began its report of the game, "Here surely was one of the best displays of football ever given by a Dundee side — and I include United's more renowned neighbours from across the way. Magnificent United earned a nickname more befitting than "Terrors" —the title that a reputation for hard, go-ahead play has won them. This was entirely out of character the slick man-to-man moves carried out at a speed that made Celtic look like labourers by comparison." Lavish praise indeed, for a United side that had beaten Celtic for the first time since promotion three years previously.