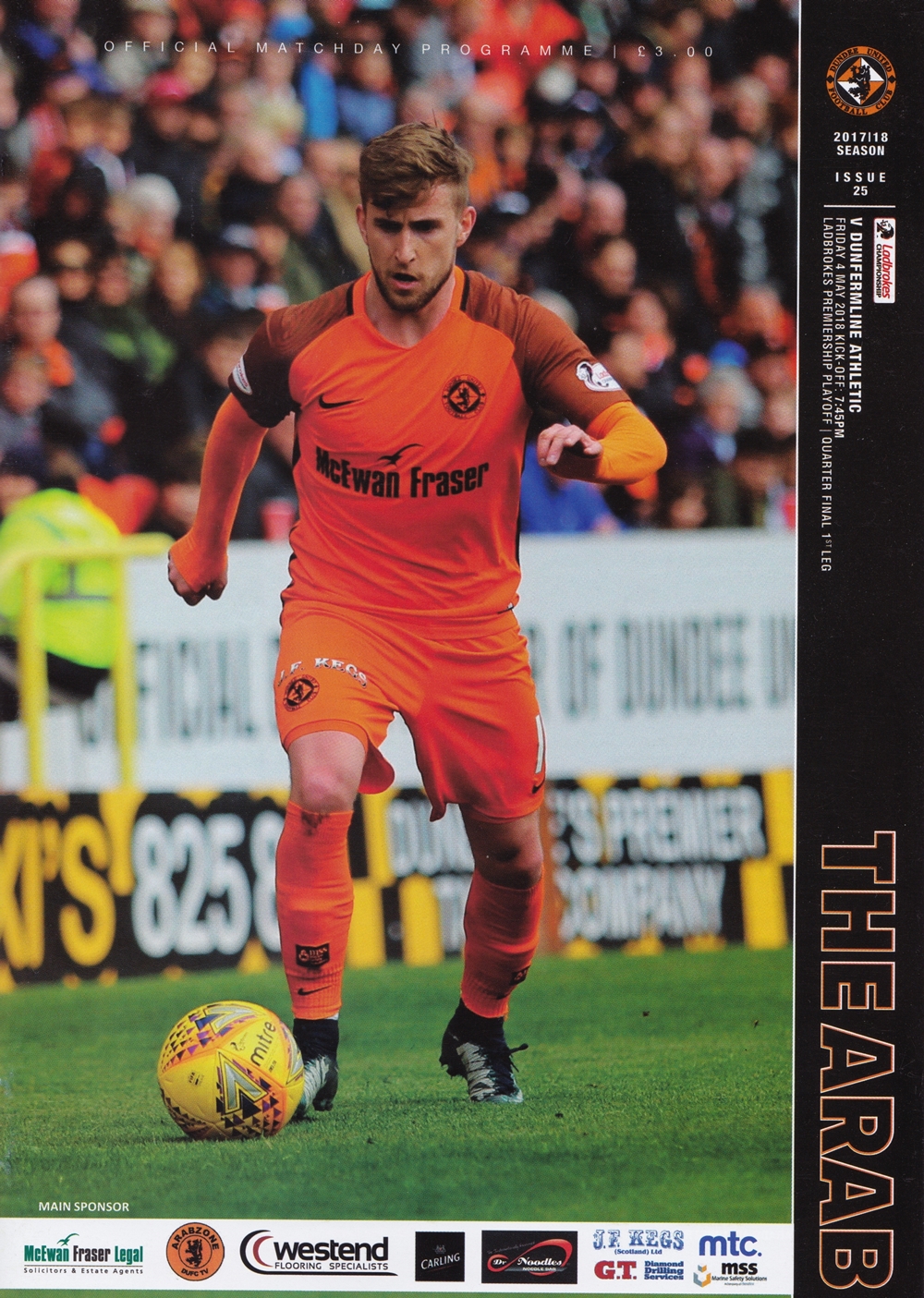 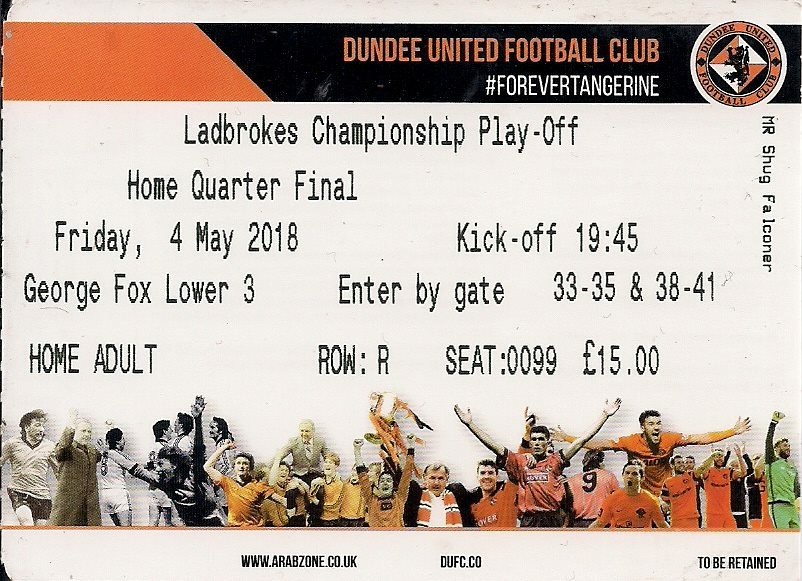 United successfully progressed to the Premiership playoffs after a hard fought 2-1 victory at Tannadice against a tough Dunfermline Athletic team.

There were two changes to the United starting eleven from the first leg, with Paul McMullan and Sam Stanton replacing Thomas Mikkelsen and Grant Gillespie. For the visitors, Lee Ashcroft won his appeal against his red card in the first game and so took his place in the Pars defence. The 0-0 draw in the first leg at East End Park ensured that the tie was very much in the balance going into this game. Although Dunfermline were unbeaten in eleven matches going into this game, they had gone a remarkable 15 games against United without a victory.

Dundee United had a chance to take the lead in the first 20 seconds after a clearance from Deniz Mehmet sent Paul McMullan through on goal. The United winger was closed down by former team mate Callum Morris, and his shot from the edge of the area was high and wide. United forced a few corners in the early stages, none of which led to any decent chances. However, on the eighth minute the home side did create a chance through a Scott Fraser cross which caused confusion in the Pars defence, although Bilel Mohsni could only prod the ball over the bar.

Dunfermline had their first chance on the 13th minute after Bilel Mohnsi failed to cut out a cross from Fraser Aird. The ball broke to James Craigen, who had scored against United for Falkirk in last season’s playoffs, but his shot was blocked and the ball rebounded behind for a goal kick. The away side took the lead in a minute later after a driving run and cross by Fraser Aird on the left. Declan McManus nipped in ahead of Bilel Mohsni to stab the ball past Deniz Mehmet at his near post.

United had a good chance to strike straight back two minutes later when Tony Ralston fired a low ball in from the right, but Scott McDonald could not get the ball under control and a goal kick was the result. Dunfermline then had another good chance when Kallum Higginbotham drove the ball into the United six-yard box, but Mohsni was able to clear the ball before Nicky Clark could get to it.

In 24 minutes Craigen fed Kallum Higginbotham and on to Ryan Williamson. The cross was sent over the bar off Nicky Clark whose attempt was closed down by the advancing Deniz. McManus turned the next chance over the bar but then a Morris tackle on McDonald gave United a free kick 35 yards out and when that was pumped into the Pars box it was Clark who rose to head the ball away.

With ten minutes to go before the break, Dunfermline spurned a brilliant chance to double their lead. The ball was played through to Declan McManus who had a clear run on goal, and despite looking suspiciously offside the flag did not go up. He found himself one on one with Deniz Mehmet, and although he could have slipped the ball to Fraser Aird on his right who had an open goal, he chose to take the shot on but his effort was rather weak and Deniz was able to get something on the ball and divert it wide for a corner kick. It was a good save, but Deniz should not have had a chance to make the save.

With a minute left in the half, Sam Stanton surged forward and played in Billy King. The winger cut the ball back for Jamie Robson on the edge of the penalty area but the left back’s shot was blocked by James Vincent. On the stroke of half time, United had yet another escape as a Fraser Aird cross from the left was headed against the bar by Nicky Clark, where again it could be argued that the Dunfermline striker should have done better. The half time whistle went and although United were one goal down it could and should have been a lot worse.

A change was needed at half time to stem the tide, and a change arrived in the form of Thomas Mikkelsen, who came on for Paul McMullan, and the consequent change in formation was perhaps the biggest factor in United eventually prevailing in the tie. It did not have an immediate impact as Dunfermline continued to create the better chances in the early stages of the half. Two minutes in, Declan McManus hit a low shot from the edge of the area, but it was straight at Deniz Mehmet and the United keeper comfortably gathered the ball. Fraser Aird tried his luck from 35 yards out a minute later, but his effort trundled well past the post.

The second half continued in a rather scrappy fashion, with neither side able to get a grip on proceedings. However, almost out of nothing, twelve minutes into the half the home side got a welcome if unlikely equaliser. A corner kick from Billy King was headed towards goal by Thomas Mikkelsen on the penalty spot. The ball looked like it would be gathered by Dunfermline keeper Lee Robinson, but just before the ball landed in his hands Scott McDonald appeared out of nowhere to get a nick on the ball and divert it past the goalkeeper and into the net. In bizarre scenes, at the other end Deniz Mehmet injured his knee celebrating the equaliser. He did receive a lengthy spell of treatment, but after a couple of minutes it was apparent that he could not continue, and he was replaced in goals by Harry Lewis.

Buoyed by the goal, United took control of the game and nearly had another chance soon afterwards, but Sam Stanton’s shot was well blocked by Callum Morris. On the resultant counterattack Nicky Clark broke forward and fed Fraser Aird on his left, but Jamie Robson brilliantly cut out the cross before the ball arrived at the feet of Declan McManus, who would have had a tap-in. A corner kick was the result, and after that was half cleared the ball was played back into the penalty box, from which Lewis made a brilliant save from a McManus header that looked for all the world like it would give the visitors their lead back.

As the action went back up the other end, United forced a corner of their own, although from that set piece Stewart Murdoch failed to keep his header down. It mattered not, as with twenty minutes to go United scored a second goal, which would prove to be the goal that won the match. Sam Stanton picked the ball up in midfield and drove towards the penalty area, beating two defenders on his way. Once in the box, he took on Callum Morris, and got the break of the ball as the ball rebounded off the Dunfermline defender, leaving him one on one with Robinson. He prodded the ball past the onrushing keeper to give United the lead.

Dunfermline looked rather shellshocked due to finding themselves behind after being so dominant before half time, and their response was to bring on defender Jean-Yves M’Voto and play him up front in an attempt to unsettle the United defence. However, beyond winning a few knockdowns his impact on the game was limited. With ten minutes to go, Scott Fraser forced Robinson into a great save with a shot from 20 yards out as United sought to put the game out of sight. A minute after that a Fraser Aird free kick from the right looked threatening but was cleared by the United defence before it could reach M’Voto at the far post. United broke up the pitch and Jamie Robson hit a good cross into the Dunfermline penalty box from the left, but again the danger was cleared.

There was a scare for the United support with two minutes to go, as a scramble in the United penalty area caused a few hearts in mouths. A run from Declan McManus caused the problems, and his shot was blocked. A further shot came into the box which was also charged down, and after two or three swipes at the ball from United defenders the ball was eventually cleared, and Dunfermline’s last chance of rescuing the game went with it.

Although five minutes of stoppage time ensured a tense finish, United were able to see that time out and take their place in the playoff semi final against Livingston, with the first leg being at Tannadice a mere three days after this match. It was a win which did not look likely at half time, but somehow United were able to turn the tie around in the second half. 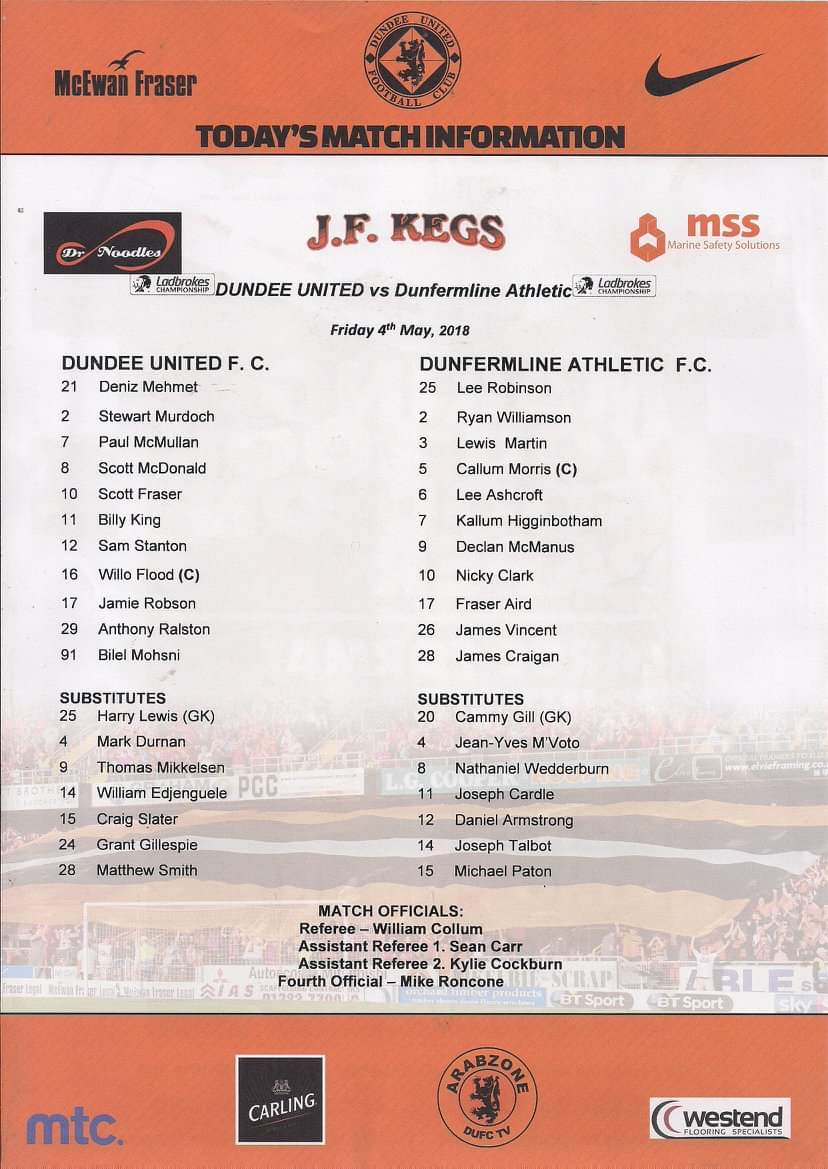