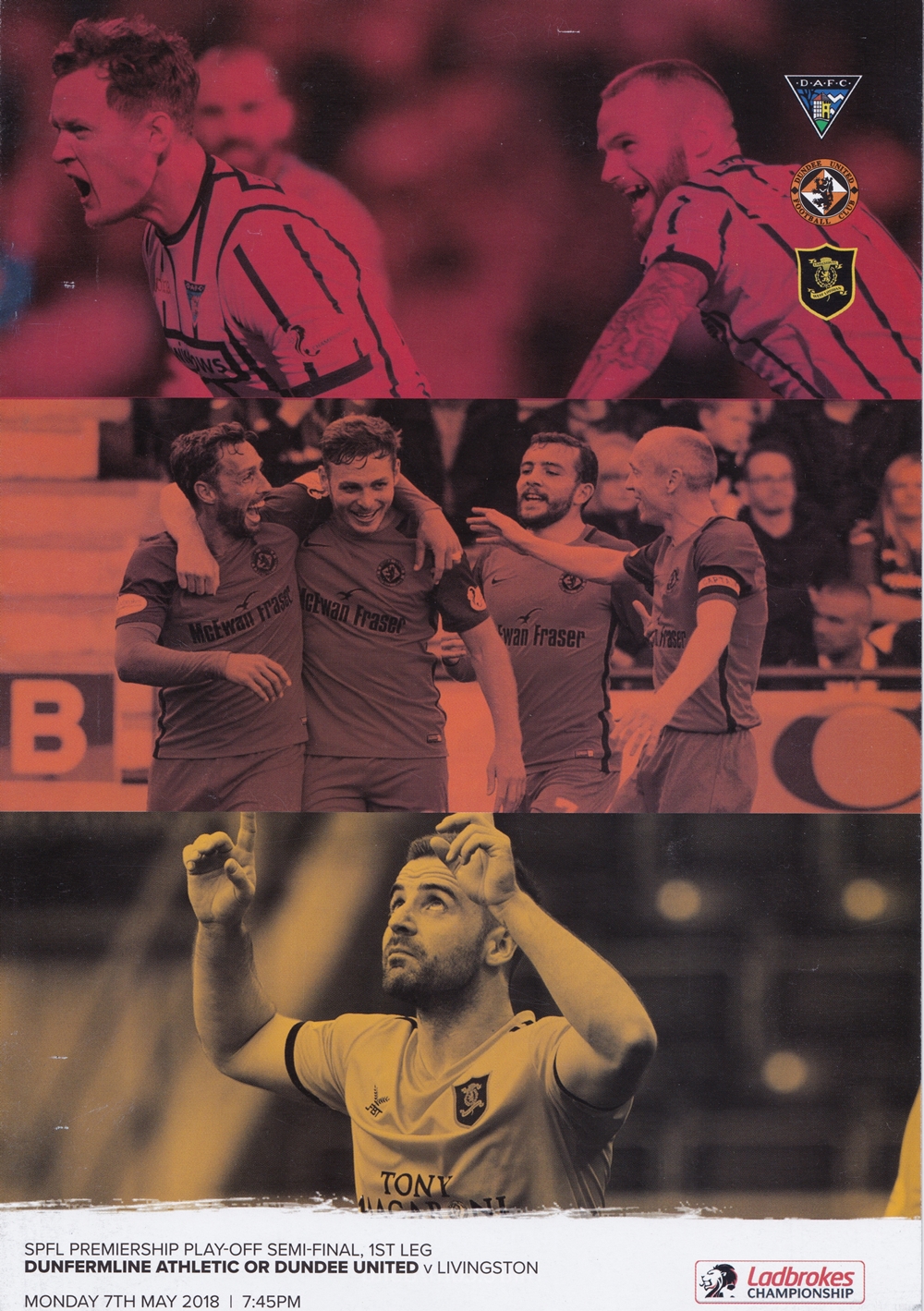 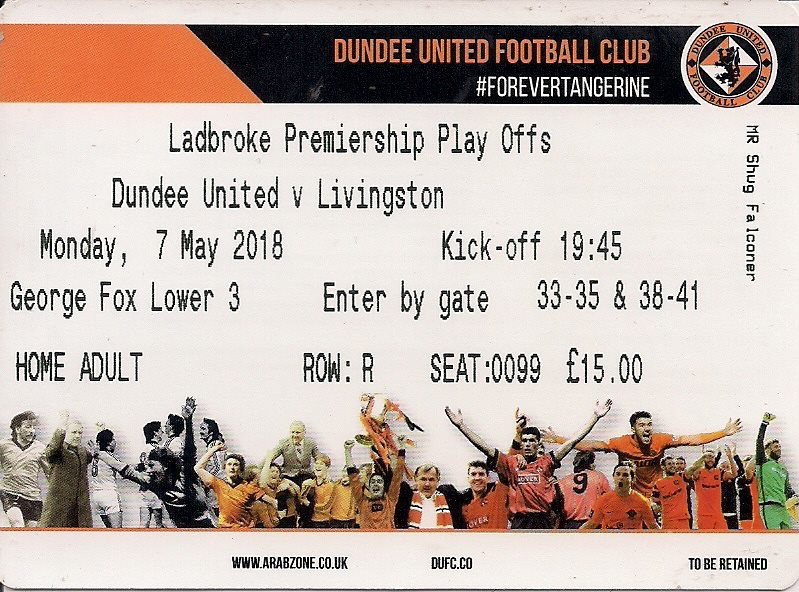 Three minutes of madness saw Dundee United turn a comfortable 2-1 lead into a 3-2 defeat against Livingston in the first leg of the Premiership playoff semi-final at Tannadice. Although United only had 72 hours to prepare for the game after their victory over Dunfermline, the late collapse certainly could not be attributed to tiredness as late defensive lapses saw United lose a game they had looked in control of.

There were two changes to the starting line up from that win, one of which was enforced after the injury to Deniz Mehmet, with Harry Lewis replacing him in goals. Thomas Mikkelsen came in for Paul McMullan in the only other change, after his introduction at half time against Dunfermline did so much to alter the course of that game.

There was a truly remarkable start to the game, as two goals were scored in the first three minutes. The away side were the first to hit the net in the second minute as Scott McDonald was dispossessed in midfield by Scott Robinson. He played a fine through ball to Raffalele De Vita who smashed the ball past Harry Lewis to give Livingston the lead. However, that lead proved to be short lived as United got back into the game immediately by equalising straight from kick off. This time it was Scott Pittman who lost the ball in midfield. The ball broke to Billy King who drove down the United left and played the ball to the edge of the penalty area to where Thomas Mikkelsen was waiting, and the Dane guided a lovely first time shot past Neil Alexander and into the net.

Remarkably, Livingston could have gone 2-1 up soon afterwards as Josh Mullin broke down the right. He fired a low drive which flew across the face of the United goal and just wide of the far post. A minute later, De Vita came close to grabbing his second goal when Scott Robinson chipped the ball over the top for him but his volley was turned wide by Harry Lewis. Ten minutes into the game Scott Pittman tried his luck from distance but his effort curled wide of the far post. A couple of minutes later De Vita hit a spectacular volley just over the bar from a Declan Gallagher cross, but the Italian was just offside in any case.

There was a narrow escape for United on the 18th minute as they were lucky not to concede a penalty when Scott Robinson appeared to be tripped by Stewart Murdoch while in the act of shooting. However, to the immense relief of the United supporters, referee Nick Walsh waved the penalty claims away. Robinson got a bit of luck of his own a minute later after a bad challenge on Willo Flood saw him pick up a yellow card for a foul which looked like it merited a red.

The away side were certainly having the better of the early exchanges, although the game did settle down after that frantic start. The longer the first half went on, the more in control United became. They came close to taking the lead midway through the half when Thomas Mikkelsen headed a Billy King corner kick towards goal but Neil Alexander somehow tipped the ball over the bar. Scott McDonald was nearly played in a couple of minutes later after some good play by Scott Fraser, but the ball was cut out by the Livingston defence just before it reached the Australian. Tony Ralston then sliced a shot at the back post after another dangerous corner from Billy King as United sought to increase the pressure.

That pressure paid off after 28 minutes as United took a deserved lead. More good play from Scott Fraser created the chance, and he passed the ball to Sam Stanton who was breaking through the middle of the park. Stanton passed the ball down the United right to Tony Ralston, who hit a fierce shot towards goal that was deflected into the net past a helpless Neil Alexander by Jackson Longridge.

Livingston nearly got an immediate reply when De Vita was again played through on goal, but he was forced wide as he tried to round Harry Lewis, meaning that he could only hit the side netting with his shot. At the other end, with ten minutes left in the half Ralston nearly scored again, but this time Declan Gallagher was able to block his goalbound effort.

Despite playing at right-back, Tony Ralston was continuing to be one of United’s biggest attacking threats, and he nearly scored again just before half time when he was able to control another Billy King corner but this time his shot went a yard over the bar.

The first chance of the second half came five minutes in when Scott McDonald met a Ralston cross from the right, but Australian striker’s header. The loose ball was then hammered clear by Alan Lithgow.

The game rather hit a lull at this time, with United having the better of possession but without creating too much against opponents who were solid and well organised. The next chance came for the away side midway through the second half through Raffaele De Vita, who had a shot from the edge of the area after a cross from Josh Mullin. His low shot was blocked, and as the ball bobbled around in the United penalty area Bilel Mohsni was able to hack the ball clear before any Livingston player could pick up the loose ball. Not long afterwards, Willo Flood was booked for a foul on Scott Robinson and although the resultant free kick was dealt with by Harry Lewis, the booking was to prove costly later on.

United had a couple of chances after that, with a through ball from Thomas Mikkelsen just failing to find Scott Fraser, followed by a corner kick from Billy King which Declan Gallagher was able to head away just before Mohsni could get his head on the ball.

With thirteen minutes to go, Livingston were gifted an equaliser. There did not appear to be too much danger when Scott Robinson picked up the ball in midfield, but his through ball was not dealt with by a static United defence and Josh Mullin, who burst between Bilel Mohsni and Jamie Robson, picked the ball up and drove unopposed towards goal. When one on one with Harry Lewis, he poked the ball past the United goalkeeper to level the scores.

It got worse for United three minutes later as another defensive error led to Livingston taking the lead. Stewart Murdoch dithered on the ball 40 yards from goal and was robbed by Shaun Byrne. Scott Pittman picked up the loose ball and raced in on goal. He clipped a fine finish past the helpless Lewis to give the away side a sensational lead.

It was to get even worse for United a couple of minutes later. Shaun Byrne tried to prevent Willo Flood from taking a quick free kick and in his frustration the United captain shoved Byrne to the ground. Referee Nick Walsh had no option other than to give Flood his second booking and send him off. A clearly infuriated Flood initially refused to leave the pitch and once he did eventually walk off he took out his frustration by screaming at the United bench and pushing away a pitchside camera as he headed for the dressing room. It was an inauspicious end to Flood's United career.

It could have got even worse for United as Declan Gallagher saw a late header saved by Harry Lewis. With the second leg in mind, a further blow was to come as Bilel Mohsni limped off in stoppage time to be replaced by Mark Durnan. There were no further goals and United were left with a 3-2 defeat, making their task an even more difficult one than it looked before the game. The result meant that Dundee United had to win in Livingston for the first time since 2005 if they wanted to keep their hopes of promotion alive. 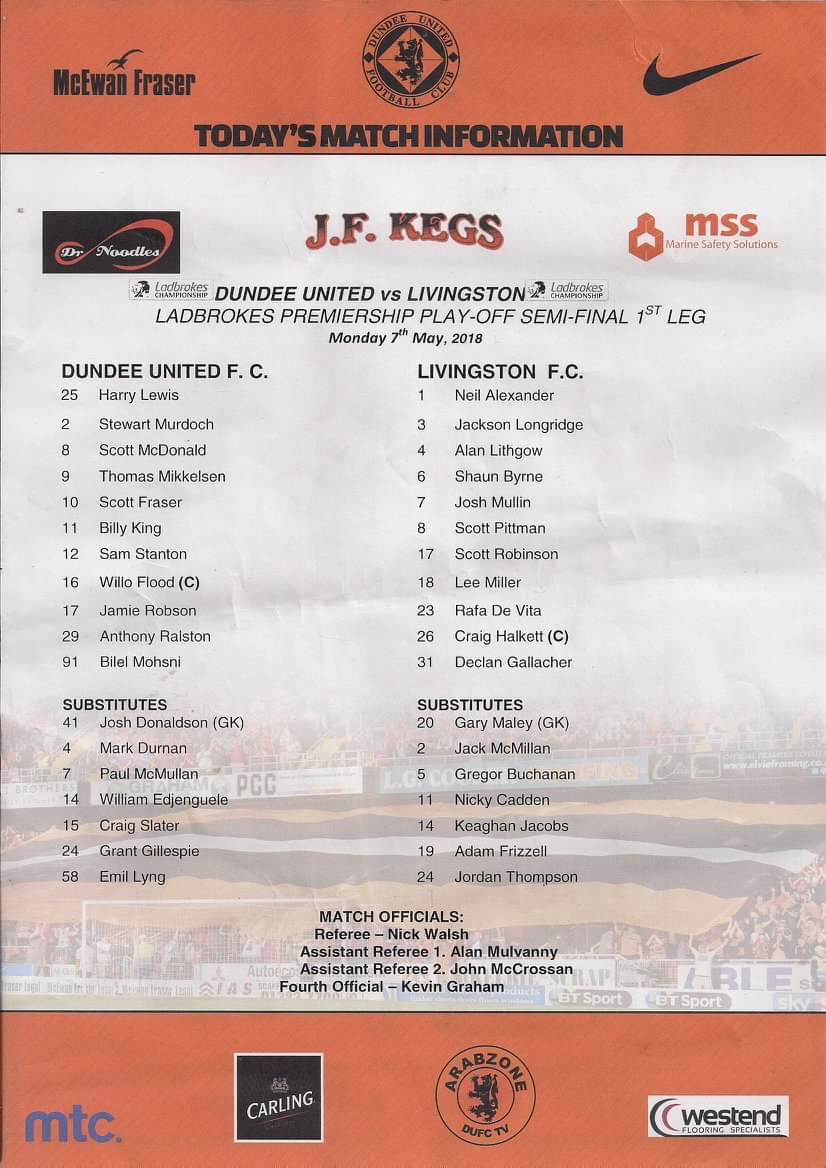