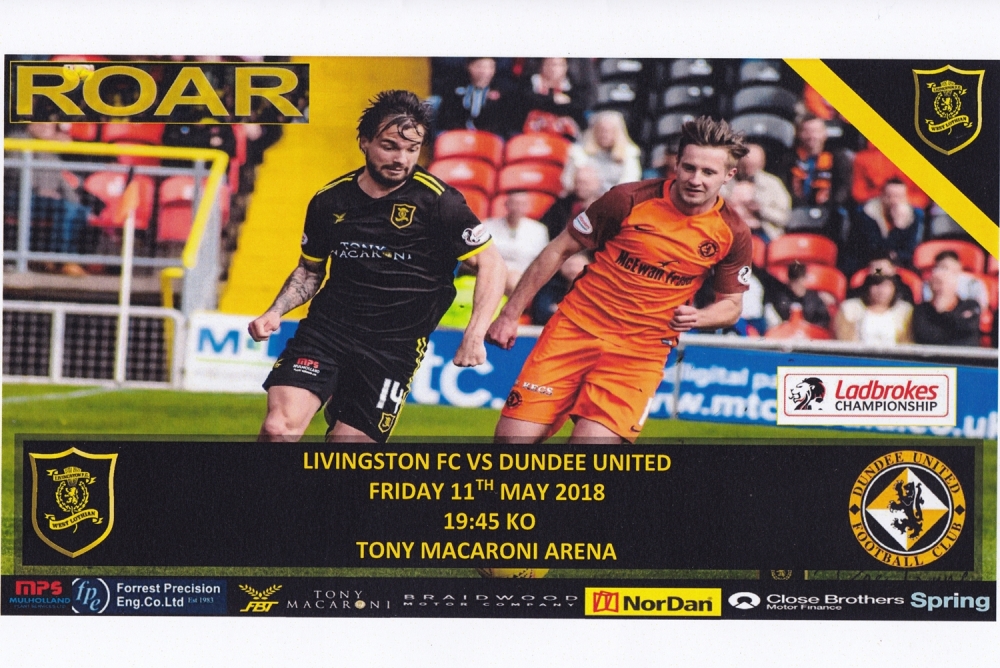 United’s season ended in disappointment as a 1-1 draw at the Tony Macaroni Arena was insufficient to overturn the first leg deficit to Livingston. The aggregate defeat consigned United to a third year in the Scottish Championship, and on balance the side from West Lothian fully deserved to go through to the next round to take on Partick Thistle.

Two changes were made by Csaba Laszlo to the starting line up from the first leg as United switched to a 4-4-2 formation. Mark Durnan and Grant Gillespie returned to the team, replacing Jamie Robson who was dropped to the bench, and the suspended Willo Flood.

The match began in bizarre scenes as Livingston were forced to open a stand behind the goal to accommodate their larger than usual support, leading to hundreds of home fans walking round the side of the pitch mere inches from the pitch to access that stand while the game kicked off.

Although United did create the first chance of the game after three minutes when a Scott McDonald shot from just inside the area was blocked by the Livingston defence, they made the worst possible start as they found themselves a goal down after a mere six minutes. Yet again it was a badly defended set piece. Keaghan Jacobs sent a free kick into the box, and under very little pressure Declan Gallagher was able to head the ball across goal. It was close to United keeper Harry Lewis, but he flapped at the ball and the ball was headed into the net at the far post by Alan Lithgow from a couple of yards out.

The goal meant that United needed two goals to force extra time. The team did respond to the setback very well and threatened soon after losing the goal with a break down the left from Billy King. His cross into the centre was threatening but sadly no United player could get on the end of it. A few minutes later, Scott McDonald headed wide from a corner kick. Livingston came close to doubling their lead from another set piece on the 15th minute after Mark Durnan gave away a cheap free kick out wide, but an offside flag ended the danger after Harry Lewis had again flapped at the delivery into the box. Within a minute, only a great block from Tony Ralston prevented Livingston from doubling their lead, and despite Stewart Murdoch giving the ball away in the penalty area United were eventually able to clear the danger. At the other end, Scott McDonald saw a shot brilliantly charged down by Alan Lithgow. Grant Gillespie tried his luck on the follow up but again his effort was blocked.

The away side got themselves back into the game on the 21st minute with a wonderful goal from Scott Fraser. After Keaghan Jacobs was caught in possession by Sam Stanton, the United midfielder passed top Scott McDonald who in turn fed Fraser on the left of the Livingston penalty area. Fraser cut inside and out looking for half a yard of space, before firing a low strike post Neil Alexander and into the net off the far post.

United had a hopeful penalty claim a couple of minutes after equalising when Sam Stanton went down in the box after a challenge from Josh Mullin, but the referee correctly waved away the protests. In fact, it was a great tackle by the Livingston player. On the half hour mark, Tony Ralston made a great break down the United right. However, having got himself into a good position, his cut back could not find any United players and was easily cleared by the home defence.

The game became a scrappy affair as half time approached, and good play was rather at a premium. Lee Miller and Mark Durnan were booked in quick succession as the game became a bit tetchy, unsurprisingly due to what was at stake. A minute after being booked Durnan sailed close to the wind by giving away another free kick out wide, although on this occasion Harry Lewis did well to claim the delivery into the box. Tony Ralston then did well to win a free kick at the other end of the pitch, but Billy King’s delivery was poor as he thumped the ball miles over the bar. Ralston became the latest player to be booked as half time drew nearer, and the referee blew his whistle to signal half time with the tie delicately poised.

Livingston came blasting out of the traps after the restart and were within inches of retaking the lead on the night within two minutes of the restart as Scott Pittman was played in behind and fired a low effort across goal that cannoned back off the post, with no one on hand to put away the rebound.

Attempting to make the most of that let off, and also bearing in mind they were having to chase the game, United began to dominate possession as the match drew on. Billy King was the first to threaten with a fierce shot across the face of goal before Scott McDonald set up Thomas Mikkelsen thirteen minutes into the half. Mikkelsen was in a great position in the centre of goal but as he got the shot away a defender was able to get the block in. Mikkelsen had another good chance a minute later, although he failed to make proper contact on the cross from Tony Ralston and the ball drifted wide. Three minutes later, a powerful Billy King shot from out wide was deflected onto the bar as United chased the game.

As the game drew on, the game became scrappy again, with United knowing another Livingston goal would almost certainly kill the tie. That goal nearly came on the 68th minute when United were fortunate not to concede a penalty after Bilel Mohsni jumped with Declan Gallagher but stretched his hand above his head to flick the ball away. Inexplicably, but luckily for United’s promotion hopes, it was missed by both the referee and his assistant. With twenty minutes to go Stewart Murdoch missed a simple defensive header to let Scott Pittman in, but Mohnsi bailed his defensive partner out with a well-timed interception. A minute later Harry Lewis missed a simple punch, but United were able to clear the ball before any home player could exploit it.

With five minutes to go Livingston brought on Scott Robinson for Lee Miller, and the former Hearts player nearly sealed the tie within a minute with his first touch of the ball. After being sent through on goal, he hit a ferocious effort against the crossbar before Nicky Cadden’s follow up attempt was blocked and then cleared.

United had their best chance of the second half with three minutes to ago after the substitutes Paul McMullan and Matty Smith combined on the right. Smith played the ball into the box to Scott McDonald, but the Australian striker could only hit the ball straight at Neil Alexander in the Livingston goal. It was a good reaction save by Alexander, but had the shot been to either side of him he surely would have struggled to keep it out. A Livingston break straight from that save was rather crudely halted by a Sam Stanton foul, for which he became the latest player to be booked.

United put Bilel Mohsni up front in a vain attempt to rescue the game, but they could not get the ball out of their own half in the latter stages due to Livingston pressing, and the game ended with a whimper rather than a bang. Yet again the season was to end in disappointment. Although the tie was in effect decided by five minutes of meltdown at Tannadice, based on this tie and the season as a whole, United had simply not been good enough to earn the right to go up. 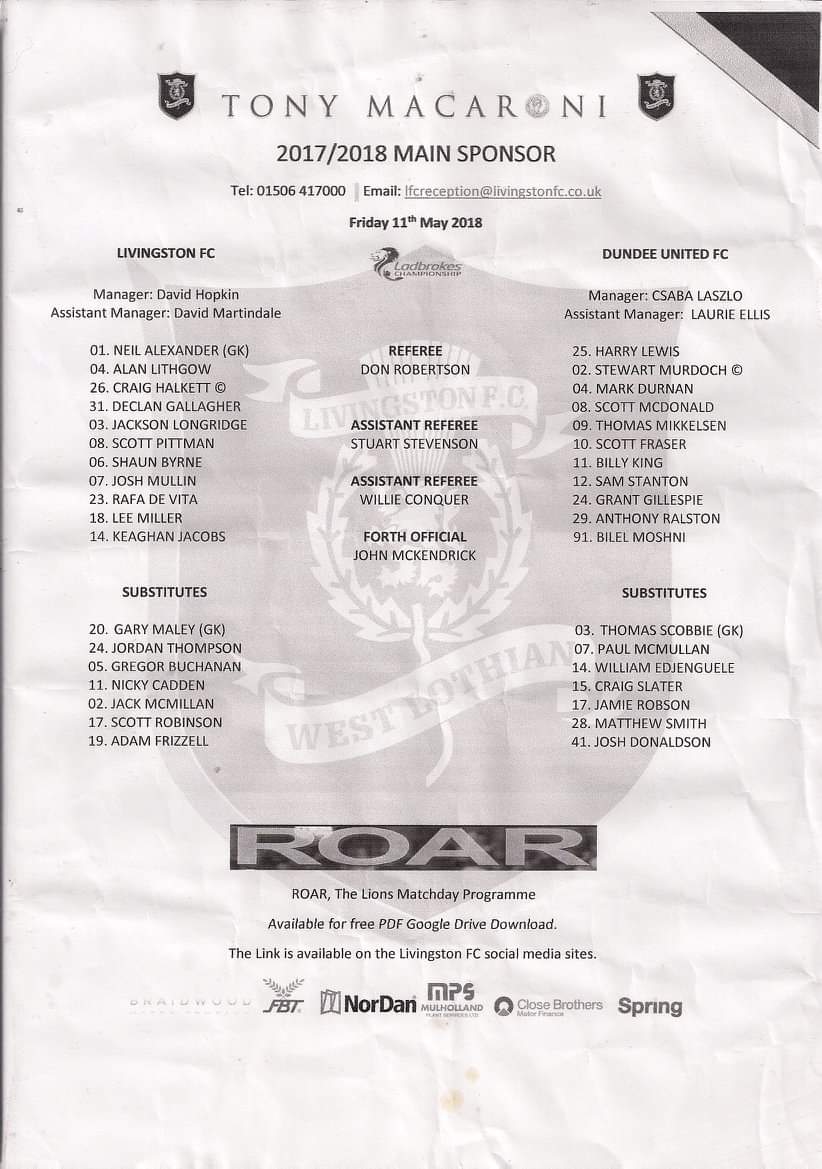