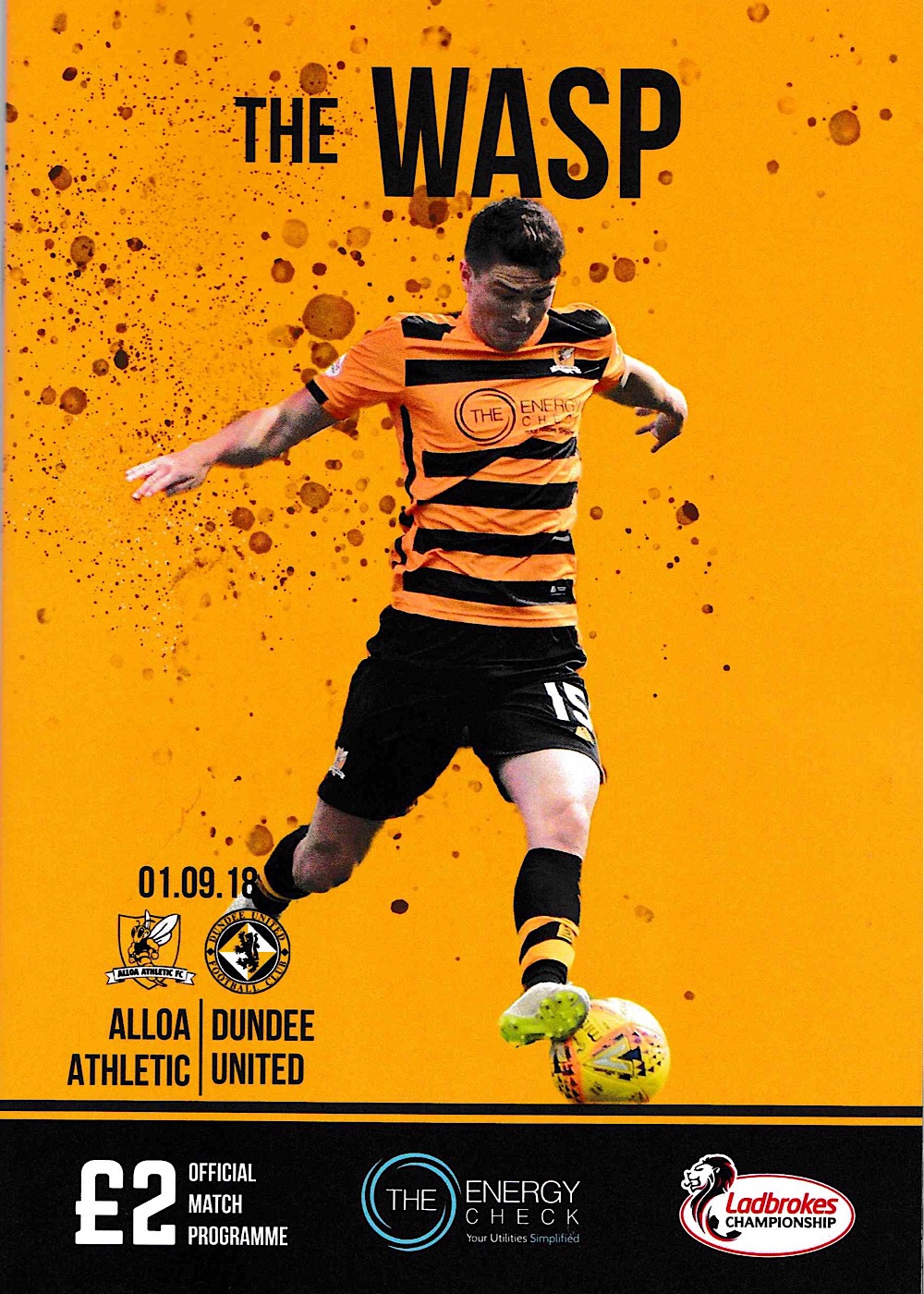 United’s run of victories ended with a 1-1 draw against Alloa Athletic at the Indodrill Stadium, in a game where, despite being pegged back by a late equaliser, it was arguable a point was the absolute most United deserved after a lacklustre performance against spirited opponents.

Manager Csaba Laszlo kept faith with the same team who had beaten Partick Thistle 3-1 in their previous game, with Sam Stanton and Nicky Clark still out through injury, and with neither Fraser Fyvie nor Billy King being fit enough yet to be in the matchday squad. Alloa came into the game off the back of an excellent 2-2 draw away to Inverness in their previous fixture.

On a narrow plastic pitch, United struggled to get a foothold in the game early on as the Wasps made an impressive start. In the third minute, United were fortunate not to go behind. Frederic Frans misjudged his header back to Matej Rakovan, and his underhit pass allowed Hearts loanee Dario Zanatta in on goal. Luckily for Frans, Rakovan was able to save Zanatta’s attempted lob. A couple of minutes later saw another United error create another chance for the home side. Stewart Murdoch was caught in possession by Jake Hastie, but Paul Watson stayed alert to block Hastie’s goalbound effort.

United simply were not able to get into the game in the early stages, and a free kick from out wide in the 10th minute was the first occasion on which they had been even slightly threatening. The free kick itself was easily cleared by the Alloa defence, rather summing up the game up to that point. Alloa broke up the park and forced a corner of their own, but Rakovan dealt easily with Iain Flannigan’s set piece. The home side had another corner kick a few minutes later, but from the delivery Scott Taggart, despite being in space on the edge of the penalty area, only managed to balloon his volley well over the bar.

The away side were slowly beginning to come into the game, but for all their possession Alloa still looked the more threatening side, particularly on the break. Jake Hastie also caused a bit of panic in the United defence with an excellent corner kick midway through the half, but they were eventually able to clear the ball and avert the danger.

United finally had their first shot on the 25th minute, although it was a rather speculative one as Adam Barton laid the ball off to Frederick Frans and the Belgian defender dragged a low shot wide from around 30 yards out that home goalkeeper Neil Parry seemed to have covered. On the half hour mark, United had the best chance of the half so far through Paul Watson. A corner kick was launched into the box by Fraser Aird, however Watson could not replicate his two goals against Partick Thistle as he headed the ball just wide of the post.

Alloa had a great chance of their own a couple of minutes later when Alan Trouten was played in on goal by a lovely chipped pass from Kevin Cawley. He beat the United offside trap and ran in on goal, but United got lucky again when the Alloa midfielder could only dink his shot wide of the far post. Matej Rakovan was forced into action again five minutes later when he was tested by a ferocious right footed shot from Dario Zanatta but he did well to save and hold onto the ball. The final chance of the half came for United as a Yannick Loemba cross just evaded Craig Curran and Fraser Aird at the back post, the home defence was able to clear and the half ended goalless.

The United players had evidently struggled with Alloa’s workrate and pressing in the first half, but they did start the second half as the better of the two teams, and they had a few decent chances in the early stages of the half. Craig Curran had a volleyed effort on goal in the first minute, but his shot was well saved by Neil Parry. Another chance came and went from a free kick after Steven Hetherington fouled Pavel Safranko out wide, but Frederic Frans could only head Fraser Aird’s delivery wide of the post.

However, after the first ten minutes of the half United’s performance levels began to dip, and Alloa took control of the game once again. The home side had a couple of near misses just after the hour mark. Paul Watson almost scored an own goal as he sliced Iain Flannigan’s corner kick out of play for another corner. The kick was half cleared by Watson and led to Alan Trouten heading a Jake Hastie cross just past the post. Two minutes after that, the lively Dario Zanatta hit a low left footed shot from outside the area just past the post as the home side chased the opening goal. The home side were dominating proceedings at this point, as Jake Hastie became the latest Alloa player to narrowly fail to hit that target, and then with twenty minutes to go Liam Dick hit a right foot volley just over the bar.

Rather against the run of play given the home side’s domination, United took the lead with eighteen minutes left. Yannick Loemba won a corner kick on the left, and Fraser Aird’s set piece was headed into the net by Paul Watson for his third goal in two games. Remarkably considering the preceding 70 minutes, United could have doubled their lead soon afterwards as Yannick Loemba drilled the ball into the net after being played through on goal by Pavel Safranko, but he was rather harshly judged to have been in an offside position.

With fifteen minutes to go United had a narrow escape as they gave away a free kick just outside their own penalty area, and Iain Flannigan stepped up to take the kick and smashed a shot off the United crossbar. United did not heed the warning, and conceded another free kick with eight minutes to go when Dario Zanatta was brought down by Stewart Murdoch 25 yards from goal. On this occasion, Iain Flannigan could not be thwarted as he curled a wonderful shot into the top corner, leaving Matej Rakovan with no chance. An equalising goal was the least the home side deserved on the balance of play.

Both sides had chances as the game drew towards its close as they chased a winning goal. Yannick Loemba had a shot deflected over the bar two minute after Alloa’s equaliser, and Paul Watson squandered a good chance to win the game with four minutes left. Again, it was from a header at a corner kick, and although the central defender had time to guide his header on target, he could only head the ball over the bar. At the other end Iain Flannigan had yet another chance after Frederic Frans became the latest United player to give away a free kick, but he could not repeat his previous success as this time he could only fire the ball over the bar.

The game ended with a 1-1 draw, as it had when the two teams had met in the Betfred Cup earlier in the season. The draw was oddly unsatisfactory for both sides, with the Terrors probably expecting the win before the game kicked off and the Alloa Athletic players perhaps reflecting that they should have won the game on the balance of play. 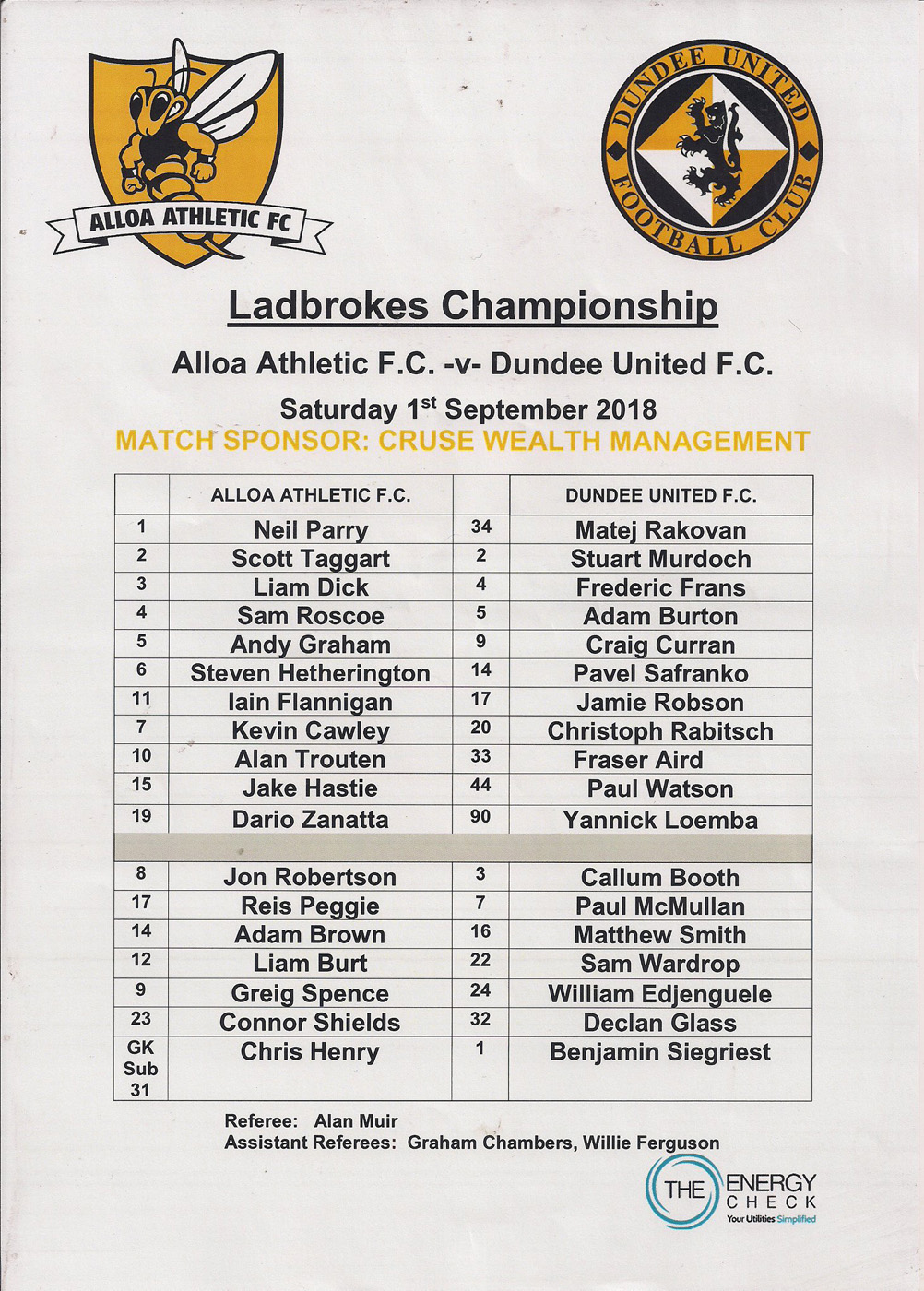