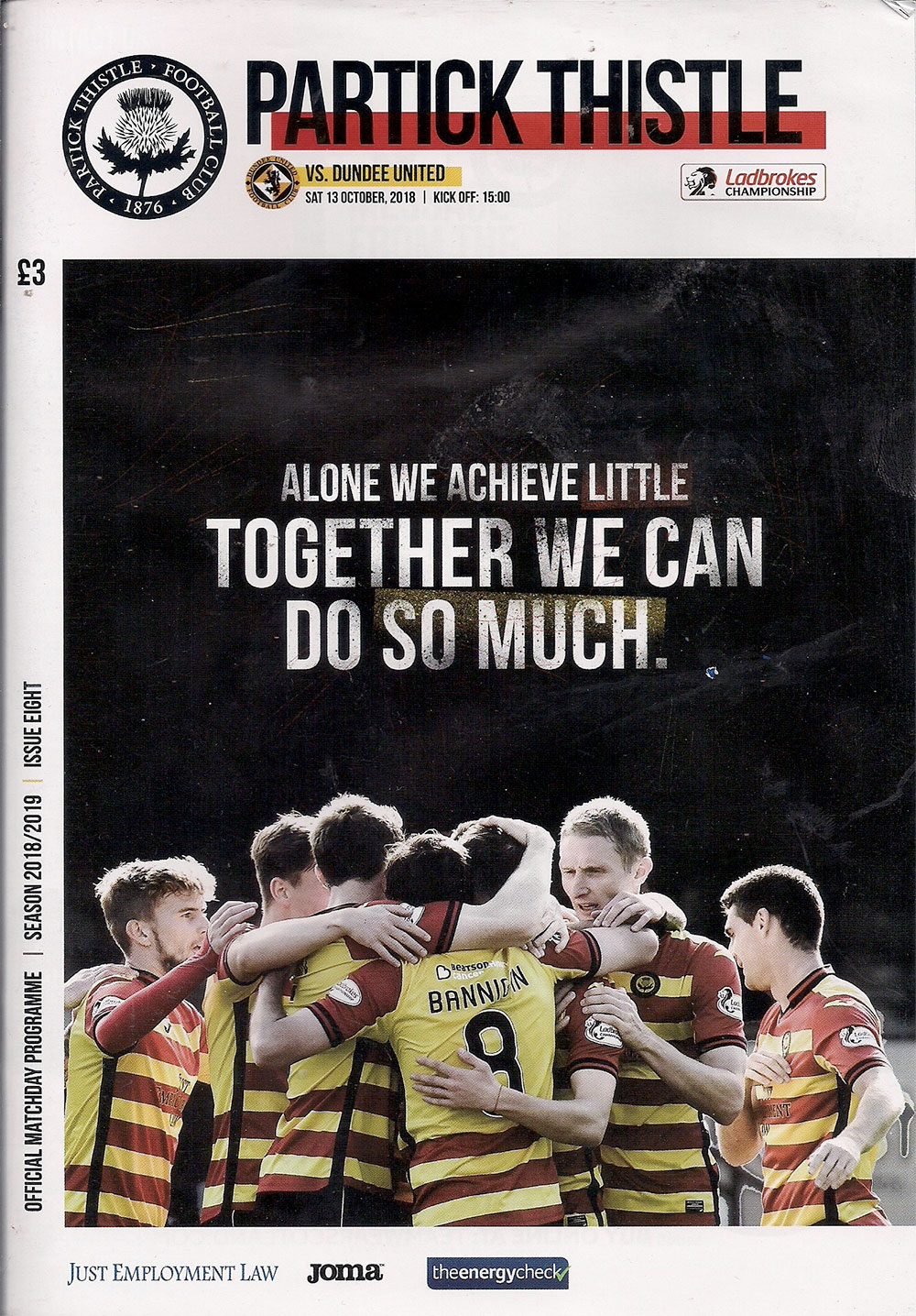 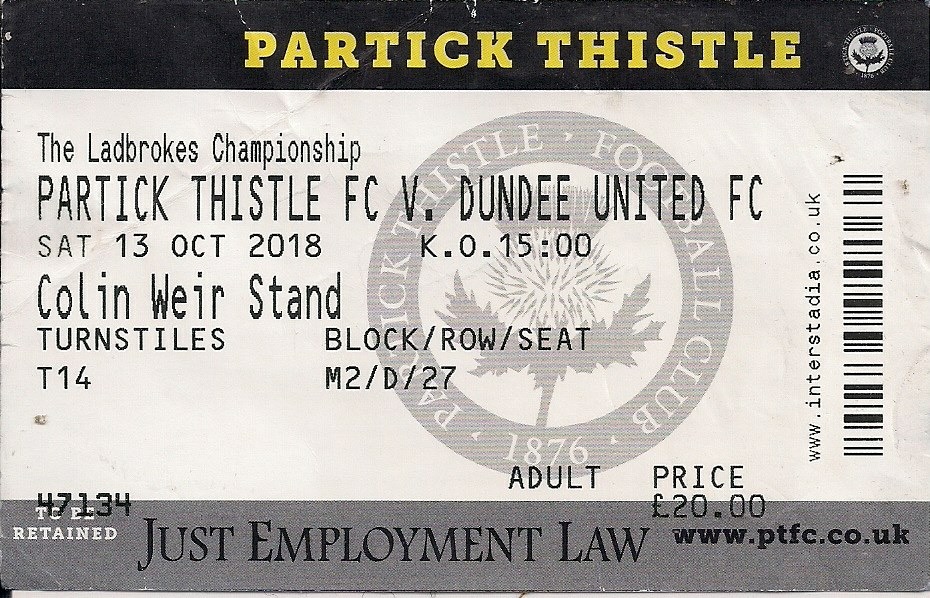 Robbie Neilson’s tenure as Dundee United head coach began in the best possible way with a 2-1 victory over Partick Thistle at Firhill. The home side were without a manager after former United defender Alan Archibald’s sacking the previous week, with Gerry Britton in temporary charge for this game. Coincidentally, Archibald was sacked after a home defeat against Ross County, as Csaba Laszlo had been seven days earlier.

Neilson’s first team selection saw two changes from the team which lost to Ayr United the week before, with Fraser Aird and Sam Stanton coming on for Matty Smith and Christophe Rabitsch. The match kicked off with the pitch in very good condition despite a spell of torrential rain in the wake of Storm Callum.

The new manager bounce was in full effect during a first half which was dominated by the away team. They had a chance within the first couple of minutes through Paul McMullan, although the winger’s shot went well wide of Cammy Bell’s right hand post. He had a further effort on goal in the eighth minute, and this time his low drive from 25 yards out was on target and Cammy Bell was forced into a good save down to his right. The same player played in Billy King on the right a minute later, but King’s cross was too deep and the home defence were able to clear.

Partick Thistle did fashion a half chance in the 11th minute which saw Christie Elliott shoot wide from the edge of the area after being setup by some good play from Craig Slater and Miles Storey, but that was a rare flurry for them in a first half of almost total United domination. A couple of minutes later, Cammy Bell was forced into another save when Pavol Safranko set up Callum Booth, but the left back was denied a goal against his former club by Cammy Bell, who saved his effort brilliantly. From the resultant corner kick, Bell had to pull off another save, this time from a Safranko header. The Partick Thistle keeper did well to hold onto the ball with Fraser Fyvie lurking.

On the 27th minute Pavol Safranko missed a good chance after winning possession from Stuart Bannigan just outside the Thistle box, and although he had plenty of time be hit his shot just wide of Cammy Bell’s right hand post. It was the best chance of the game so far, and was a chance Safranko really should have taken. He did have the ball in the net a few minutes later, but his header was ruled out for offside from a Paul McMullan cross. It was a great header, but the offside decision was correct. In between those two chances, United hit the post through Paul McMullan, although again the United player maybe should have done better as he only had Cammy Bell to beat. Fraser Aird could only fire the ball over the bar from the rebound.

With nine minutes to go until half time, United attacked down the right. Paul McMullan burst into the box but his attempted cutback was deflected wide for a corner, which Fraser Aird took. The ball was met perfectly by the head of Frederic Frans, but yet again Cammy Bell thwarted his former club with a wonderful save. Fraser Aird then saw a 30 yard free kick blocked by the Partick Thistle wall as United sought to turn their dominance into a lead.

In the final minute of the first half, Dundee United finally got the goal their play deserved. Sam Stanton broke down the right hand side after being played in by Fraser Fyvie. His cross from the goal line was volleyed into the net by Fraser Aird to give United a merited half time lead.

The second half began in much the same vein with United making the running. Partick Thistle brought on Andrew McCarthy for Blair Spittal, but the change certainly did not have an immediate impact. After a minute of the half, Paul McMullan broke forward and passed the ball to Sam Stanton, who perhaps took the wrong option given Billy King and McMullan were in support, and sadly Stanton miscued his shot and it went just wide. Within a couple of minutes, the second goal arrived and Paul McMullan was again the architect. He won the ball from Stuart Bannigan in midfield, drove forward and unleashed a drive from the edge of the penalty area which Cammy Bell could only parry to the onrushing Pavol Safranko, who tapped the ball into the empty net to double United’s advantage.

There was a half-hearted penalty claim for United eight minutes into the half after another Paul McMullan run. His cross appeared to hit the arm of Sean McGinty, but referee Willie Collum did not award a penalty. The away side’s momentum began to stall somewhat by this point, as the side visibly tired, especially Fyvie and Stanton in the middle, both of whom were returning from injury. As a result, Partick Thistle started to come into the game for the first time. Just after the hour mark, Christie Elliott drove the ball low across the face of the United goal, although none of his team mates could get on the end of the cross when even the slightest of touches would surely have led to a goal. Miles Storey headed wide from a good chance a few minutes later.

United were continuing to create chances themselves despite not having the degree of control they had enjoyed earlier in the game. They won a free kick out wide after Pavol Safranko was pulled back, and Frederic Frans headed just past the post from Fraser Aird’s delivery. Paul McMullan then had a shot blocked with just over twenty minutes to go.

The old cliché about a 2-0 lead being a dangerous scoreline was proved true with 13 minutes to go through a goal for the home side to bring them right back into the match. Chris Erskine played the ball forward to substitute Jai Quitongo, who outmuscled Rachid Bouhenna, sending the defender to the floor, before slotting the ball through the legs of Ben Siegrist and into the net to give the home side some hope.

That goal meant that United would spend the closing stages of the game under pressure to avoid an equaliser in a match that should have been well beyond Partick Thistle. All of a sudden, the away side could not get out of their own half. Luckily for United, despite the pressure Partick Thistle were not able to create any real chances in the closing stages, although the pace and power of Jai Quitongo were continuing to cause anxiety in the United defence.

Despite the Partick Thistle pressure in the final fifteen minutes, the result was a lot more comfortable than the scoreline suggested. United should have been much further ahead by the time the home side got their goal, and the performance in the first hour of the game before Fyvie and Stanton tired was massively encouraging. United remained in 4th place in the league after this win but the performance, coupled with the players returning from injury, gave real hope for the future. 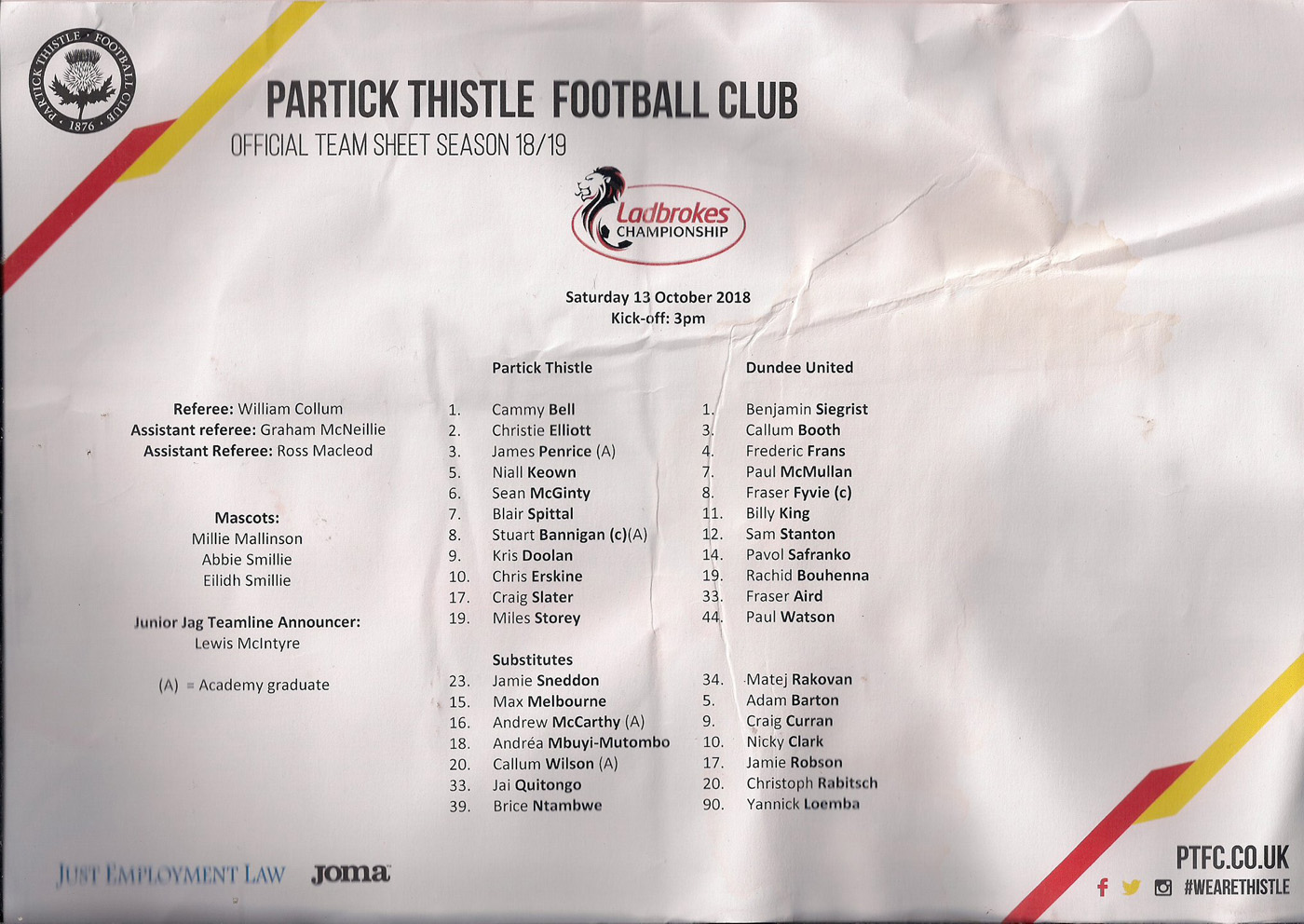