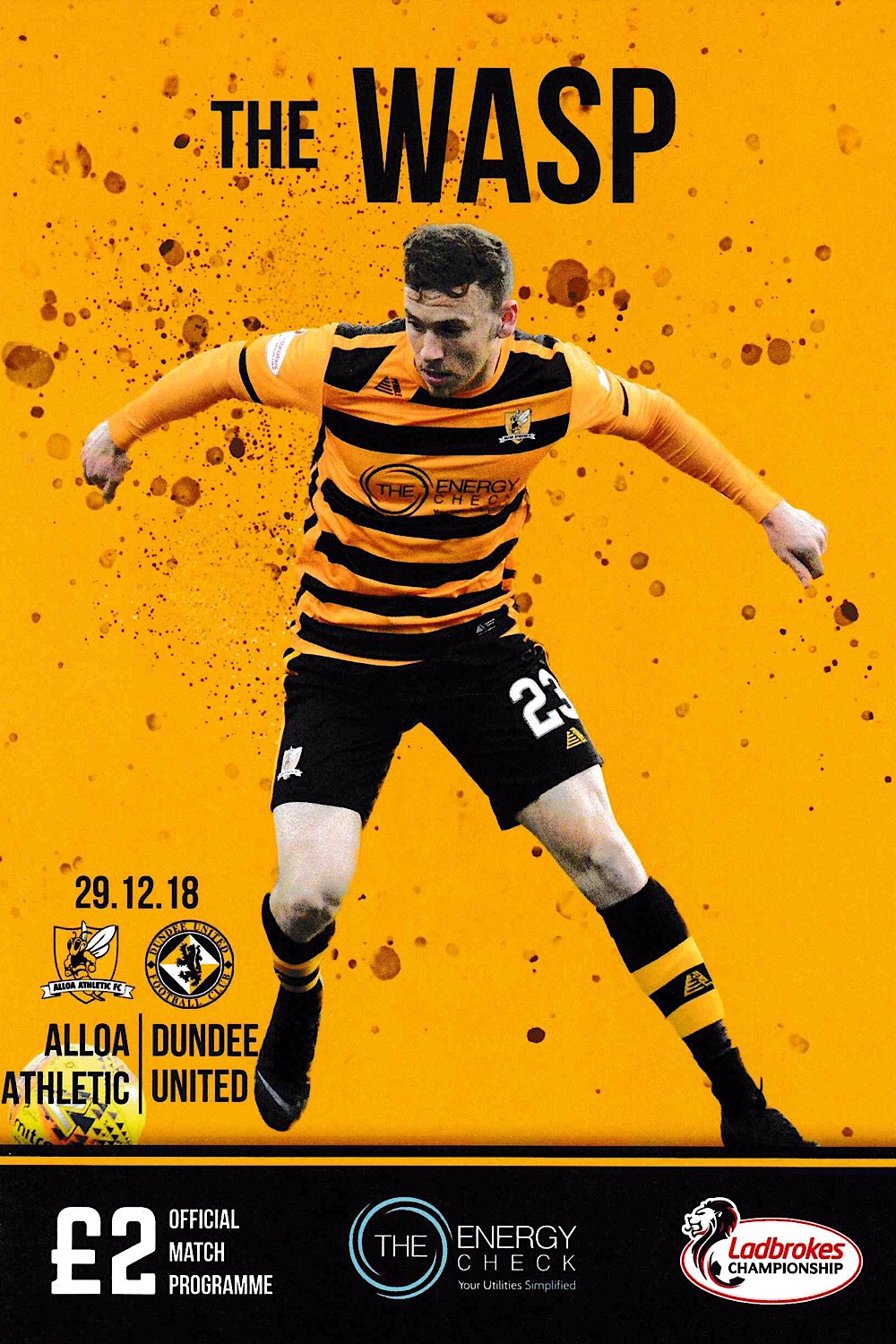 United ended 2018 in a suitably inauspicious fashion by going down to a late 2-1 defeat to Alloa Athletic at the Indodrill Stadium. Not for the first time this season, the Wasps punished United with late goals in a game that United really should have won.

Even though this game was in late December, it was already the fifth meeting between the two teams this season, with three of the previous four meetings ending in draws with United taking the lead but being pegged back by a late goal. The home side were on a good run of form, although United came into the game off the back of a good win against Falkirk.

Robbie Neilson made two changes from the side which emerged victorious that day, with Fraser Fyvie not risked on Alloa’s artificial surface after being forced off by injury the previous week, and he was replaced by Paul Watson, with Rachid Bouhenna going into midfield. Craig Curran replaced Fraser Aird in United’s only other change.

Curran nearly made an immediate impact by having the ball in the net in only the third minute of the game, although he was correctly ruled offside. A few minutes later United were able to break down the right hand side, and the move ended with Pavol Safranko heading over the bar from a Callum Booth cross. The home side made a break of their own after that chance, and Rachid Bouhenna was forced to block a goalbound effort from Jon Robertson on the edge of the United penalty area after an error from Paul Watson had gifted possession to Alloa.

Dundee United had the bulk of possession in the first half, but were unable to break down their resolute opponents due to the home side’s organisation and discipline. United also evidently struggled with the narrowed pitch at the Indodrill Stadium, making it difficult to create any width. Alloa were content to sit in and try to hit United on the break, leading to a stalemate in the first half of the game.

It was not until half an hour into the game before any further chances were created, and they came when Paul McMullan had two long range efforts within two minutes. However, both efforts failed to find the target and both sailed well wide.

Six minutes before half time, United came agonisingly close to taking the lead. Stewart Murdoch hit a cross from the right hand side and Craig Curran sent a fine header goalwards, only to see the ball cannon off the post and rebound to safety. Two minutes later, Pavol Safranko had a chance to break free from his own half, but his final pass was poor and the danger was cleared. There was still time before half time for Sam Stanton to shoot from distance, although again the ball sailed well wide of the post, and the first half ended goalless.

The second half began with appeals from the United players for a penalty when a corner kick was headed down by Pavol Safranko, but it was entirely unclear what offence was supposed to have been committed, and referee Greg Aitken correctly waved play on. Four minutes into the half, Paul McMullan hit a thumping drive from around 25 yards out after latching on to a ball from Billy King, but his rising effort rose just a little too much and the ball flew just over the bar. A couple of minutes after that McMullan forced Alloa goalkeeper Neil Parry into action with a driven cross-cum-shot that had to be tipped over the bar. Billy King had a shot deflected wide soon afterwards as United finally began to create chances against their well-organised opponents. A minute after that, King crossed for Pavol Safranko, but the Slovakian striker’s header was comfortably saved by Parry. Craig Curran was the next player to be foiled by Parry less than 60 seconds later as a United goal began to look inevitable.

The seemingly inevitable goal did arrive in the 60th minute, and it came from a free kick after a Sam Roscoe foul on Pavol Safranko, for which the young defender on loan from Aberdeen was booked. With regular free kick takers Fraser Fyvie and Fraser Aird not on the pitch, left back Callum Booth stepped up and crashed a wonderful left footed shot into the top left corner of Neil Parry’s goal to give United a deserved lead. It’s was Booth’s first goal for Dundee United, and it was brilliantly executed. He nearly got his second goal five minutes later when he fired inches over the bar with a shot from just outside the area.

Any thoughts that United may have had that the points were in the bag would surely have been dispelled on the 71st minute when the away side had a huge scare. A low cross from Scott Taggart was stabbed just wide of the post by substitute Connor Sheilds. However, that warning was not heeded as the home side equalised two minutes later. Steven Hetherington floated a free kick from out wide into the box, United goalkeeper Ben Siegrist failed to get there and Andy Graham sent a looping header into the net to level the scores.

The game had looked almost won for United, but again they had been undone by a late goal from Alloa. Despite that setback, United continued to play on the front foot as the game drew towards its end. With five minutes remaining a great ball to the back post from Fraserr Aird evaded the home defence, but unfortunately no United player could get on the end of the cross. A minute later United wasted a great chance to win the game after some superb work on the left from Callum Booth set up Fraser Aird, but the United substitute could only head the ball wide from eight yards out despite being completely unmarked.

United were made to pay for their profligacy a minute later when Alloa took the lead. Dario Zanatta picked up the ball outside the United penalty area and drove towards the goal before calmly sending a low shot beyond Ben Siegrist and into the net to give the Wasps all three points and leaving Dundee United’s fans and players desperately trying to work out how they managed to lose a game they were in complete control of.

Defeat meant that United ended 2018 a full seven points behind league leaders Ross County, and with manager Robbie Neilson bemoaning the lack of quality in the United squad after the game, there was no doubt that major surgery would be required with the squad in the January transfer window. New club owner Mark Ogren certainly had a tough task on his hands. 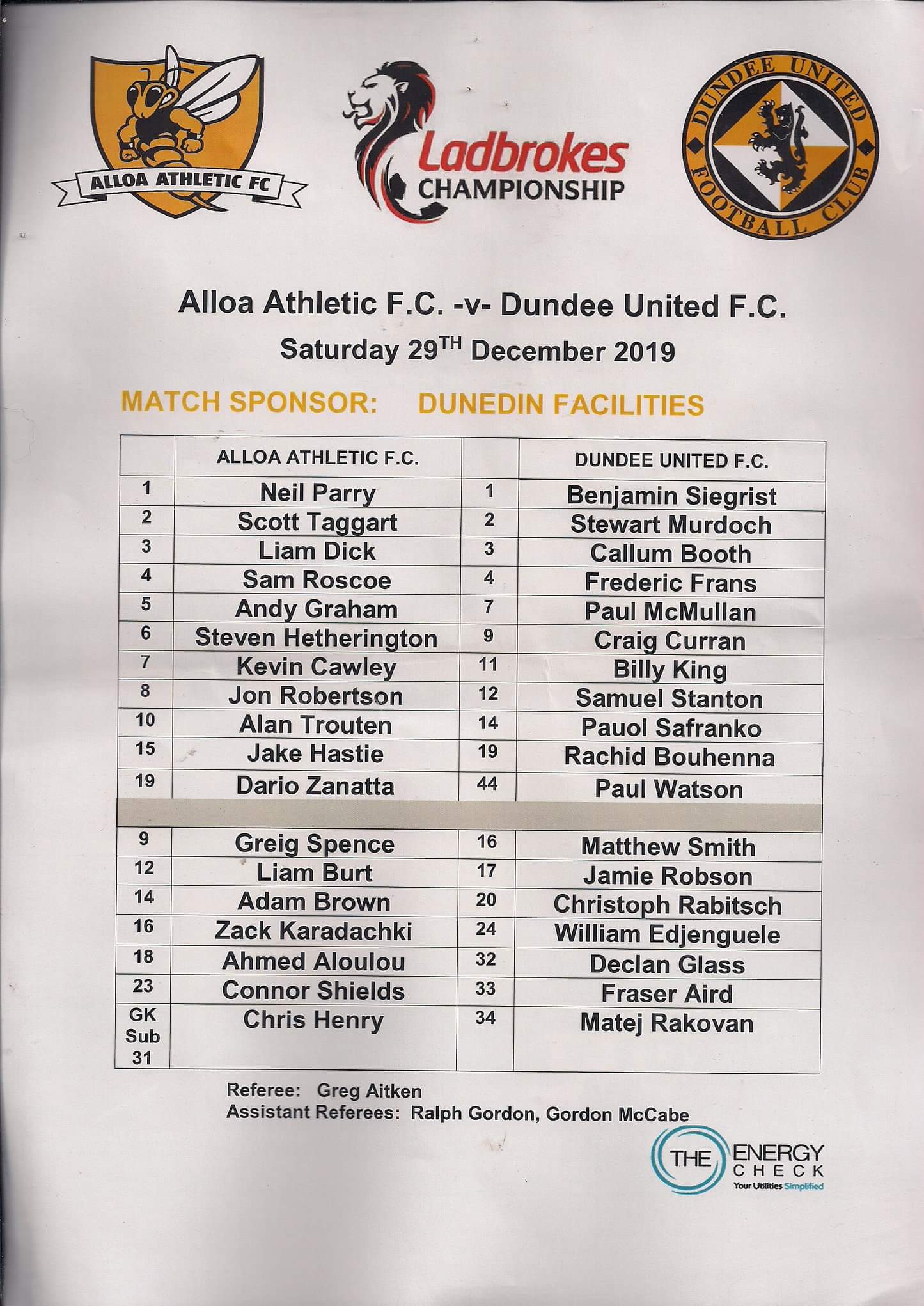