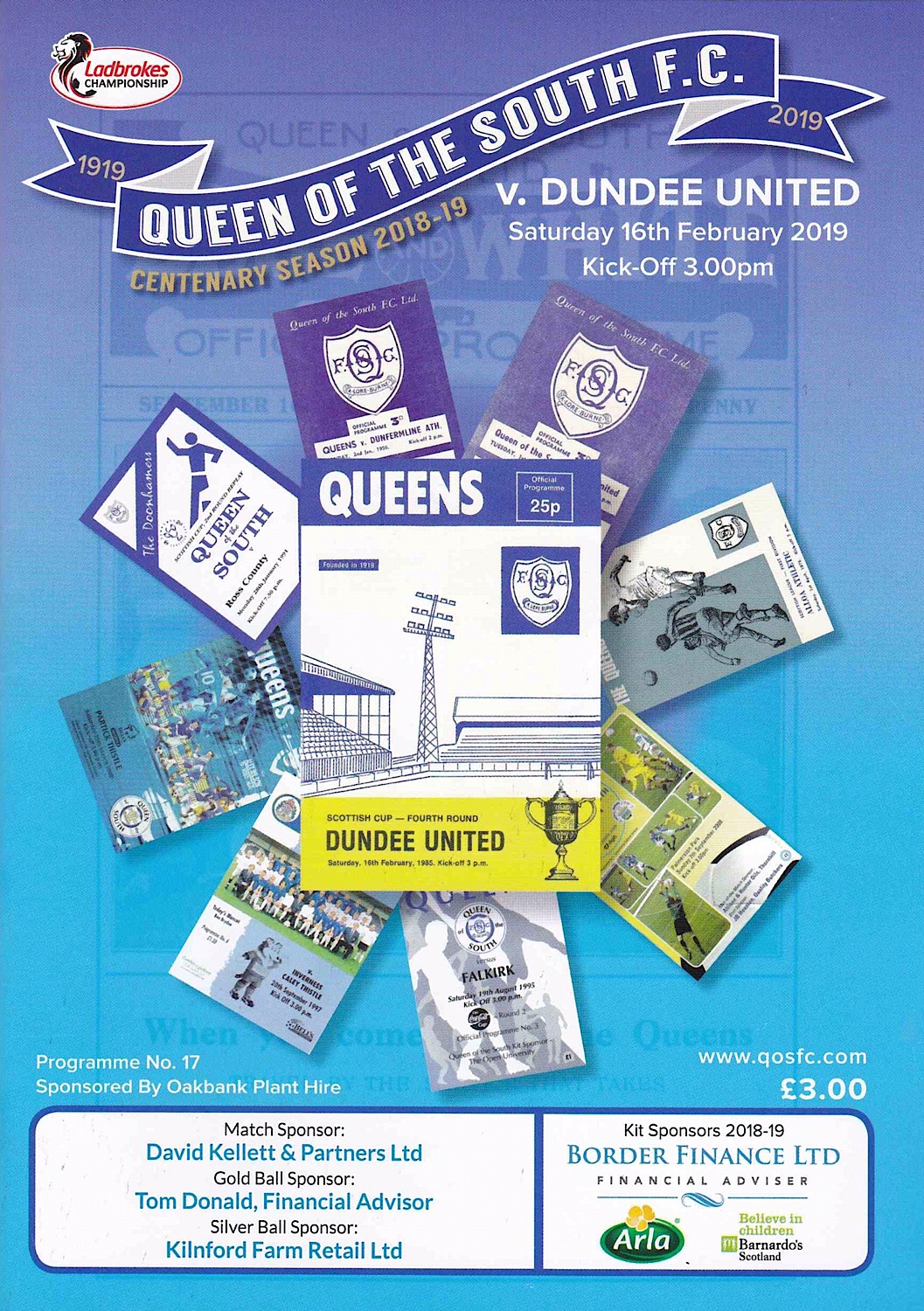 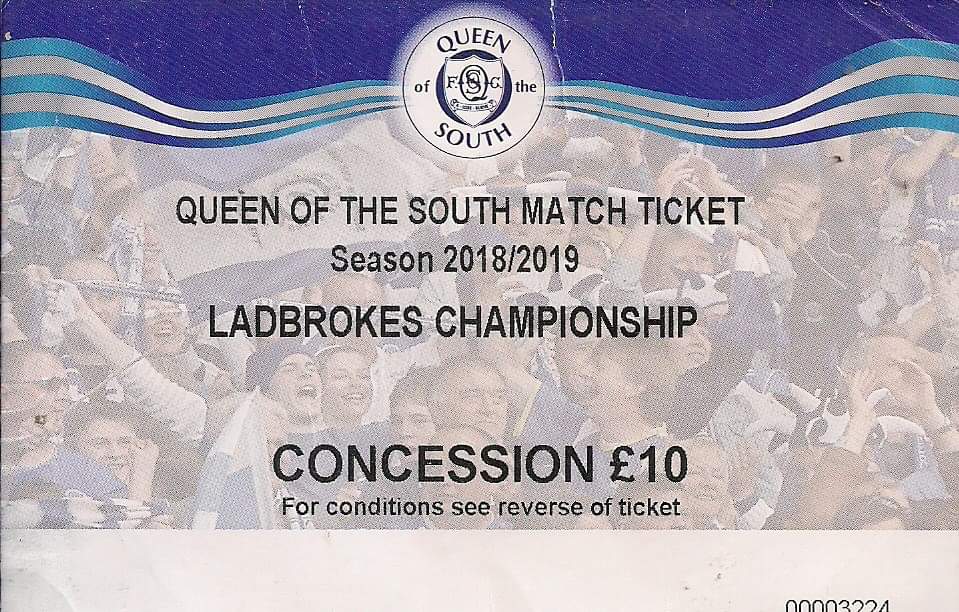 United moved to within three points from the top of the Championship after a hard fought 1-0 victory over ten man Queen of the South in Dumfries.

Robbie Neilson made four changes from the side who had won so impressively in Paisley the week before. Neither centre half was available as Mark Connolly was injured and Mark Reynolds was unable to play on the artificial surface at Palmerston Park, so they were replaced by Frederic Frans and Rachid Bouhenna. Morgaro Gomis, who was captaining the side in the absence of Reynolds, replaced the suspended Calum Butcher and Paul McMullan replaced the benched Cammy Smith. United had loaned Fraser Aird to Queen of the South in January, but the Canadian was ineligible to play against his parent club.

United knew to expect a tough game against the Doonhamers, although they had won in the previous game between the sides in Dumfries in August. The first half was fairly even in its early stages, although United had a half chance in the first minute when Pavol Safranko almost latched on to a long ball forward from Jamie Robson. However, home goalkeeper Alan Martin raced from his line and was able to gather the ball.

Aside from a scare for the away side when Stephen Dobbie almost latched on to a pass in the penalty area, forcing a clearance from Rachid Bouhenna, the first ten minutes passed without further incident. In the twelfth minute there was a stoppage after a clash of heads between Jamie Robson and Scott Mercer, with the Queens player coming off the worse and having to spend a few minutes off the pitch receiving treatment. United nearly exploited their temporary numerical advantage after Peter Pawlett drove towards goal, taking on and beating Barry Maguire before poking a shot towards goal that trundled just past the post. A minute later, United forced a corner, where Pavol Safranko met the set piece from Peter Pawlett with a volley at the back post. Sadly for United, however, the ball flew straight at Alan Martin and the Queens keeper gratefully smothered the ball.

Mercer’s return to the game did not affect the pattern of play, and Pawlett threatened again by flicking an Ian Harkes cross towards goal, but his effort lacked power and again Martin was able to save. Queens broke from that chance and forced a corner kick at the other end, from which Michael Doyle found himself in space, but his header went wide of the post. Alan Martin was again forced into action soon afterwards as Pavol Safranko met another Pawlett corner with a bullet header, but the Queens keeper was able to tip the ball over the bar. Safranko had another go a few minutes later with a curled effort from the edge of the area but again his effort was straight at Martin.

Six minutes before half time brought the incident which was to determine the game. Barry Maguire was robbed of possession in his own penalty box by Peter Pawlett, and in his desperation to rescue the situation he pulled back Pawlett as the United player bore down on goal. It was a definite foul, and as Maguire had made no attempt to play the ball referee Andrew Dallas had no option but to also send off the young centre half. It had been a costly error. Alan Martin dived the right way but the penalty from Nicky Clark beat the Queens goalkeeper and United were all of a sudden a goal up as well as being a man up.

United kept up the pressure at the start of the second half. Paul McMullan looked like he had an early chance but was crowded out by home defenders, but the winger was able to get a shot away a minute later from the edge of the area. Not for the first time, Alan Martin was equal to the effort, and he was able to tip the ball over the bar. Five minutes into the half, after Nicky Clark was fouled 25 yards from goal, Charlie Seaman fired in the free kick, but his effort lacked enough dip and went comfortably over the bar. After a Morgaro Gomis foul, Stephen Dobbie had a free kick opportunity of his own from 30 yards out a few minutes later, and his shot went narrowly wide of the post with Ben Siegrist well beaten. It was a reminder to United that even against ten men they could not relax, especially with a player with the class of Dobbie.

A couple of minutes later, Peter Pawlett was slightly unlucky to be ruled offside as he was played through on goal. The winger finished well, but was denied his second United goal by the offside flag. Nicky Clark then had a shot blocked, from which Queen of the South broke upfield and Dobbie was able to get another shot away, which was blocked by the United defence. Kyle Jacobs was the next home player to threaten, as he headed towards goal from a corner kick, but his header was straight at Siegrist and the United goalkeeper comfortably gathered the ball. Jacobs came even closer in the 70th minute as he crashed a 20 yard shot off the crossbar. In response, Robbie Neilson took off Paul McMullan for Paul Watson, matching Queen of the South’s three man defence. This was a sign that even against ten men United were content to hold on to what they had, as well as illustrating what a real threat the Doonhamers had been in the second half.

It was a bit of a tense finale as the ten men of Queen of the South sought to rescue a point. With ten minutes left, there was a flashpoint when a bad challenge by Nicky Low on Ian Harkes saw the two players engaging in a bit of pushing and shoving, and the result was a booking for both players. With eight minutes left Harkes mishit an attempted clearance and Lyndon Dykes was able to get a shot away, but the ball deflected over the bar. A couple of minutes later, Dykes again had an effort on goal after creating some space for himself in the United penalty area, but Ben Siegrist saved well low to his left. The United goalkeeper was forced into another save by Dobbie a minute later, but this save was more routine. That was the end of the chances, and the game ended with a 1-0 win for the away side.

It was not the best performance from United, although getting a clean sheet against a team with Stephen Dobbie in it is always a fine achievement. The win was United’s third win in a row in all competitions, as well as their fifth win in six games, and meant they were a mere three points from the top of the Championship, as Ross County were in Irn Bru Cup action and therefore did not have a league game. 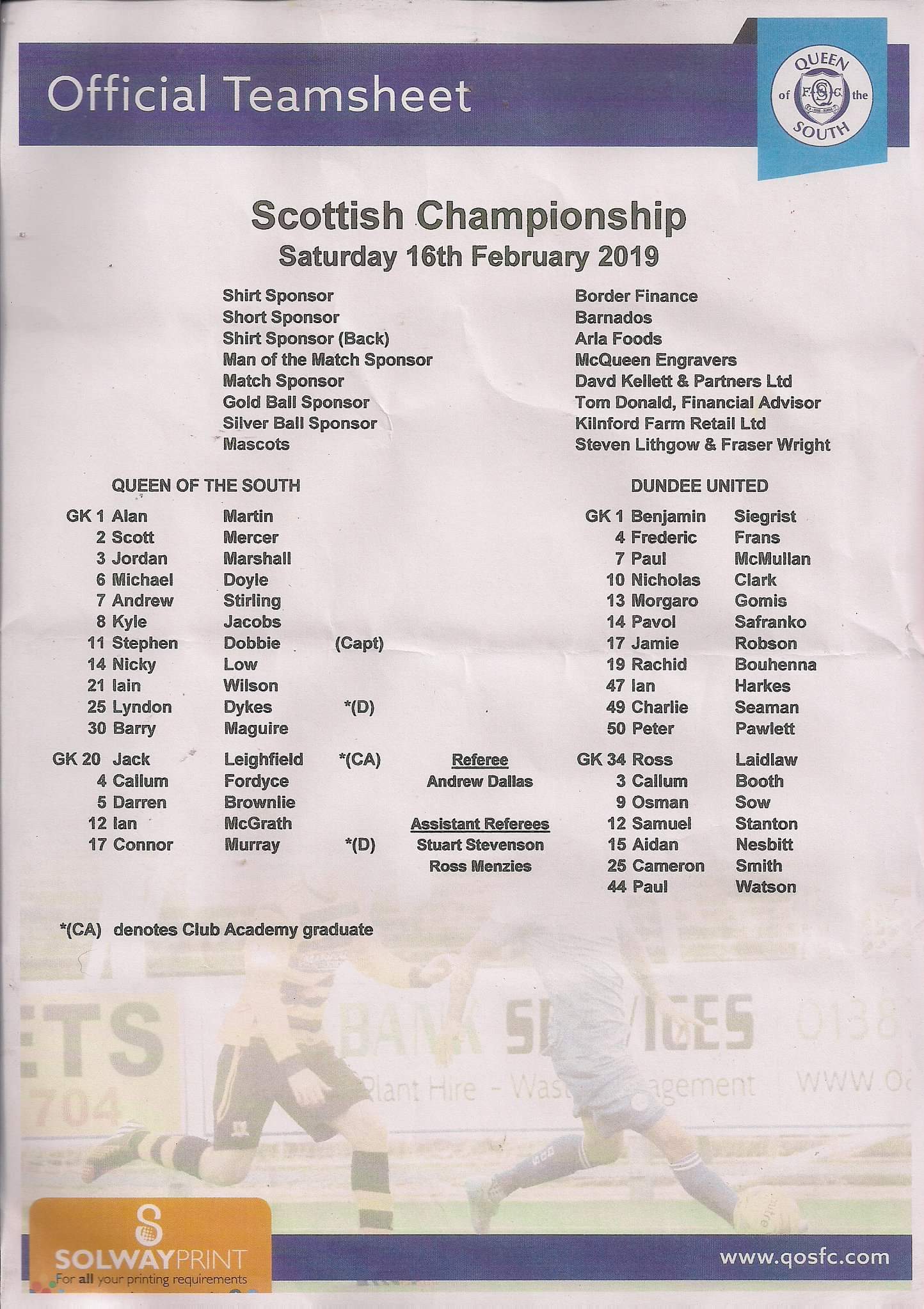