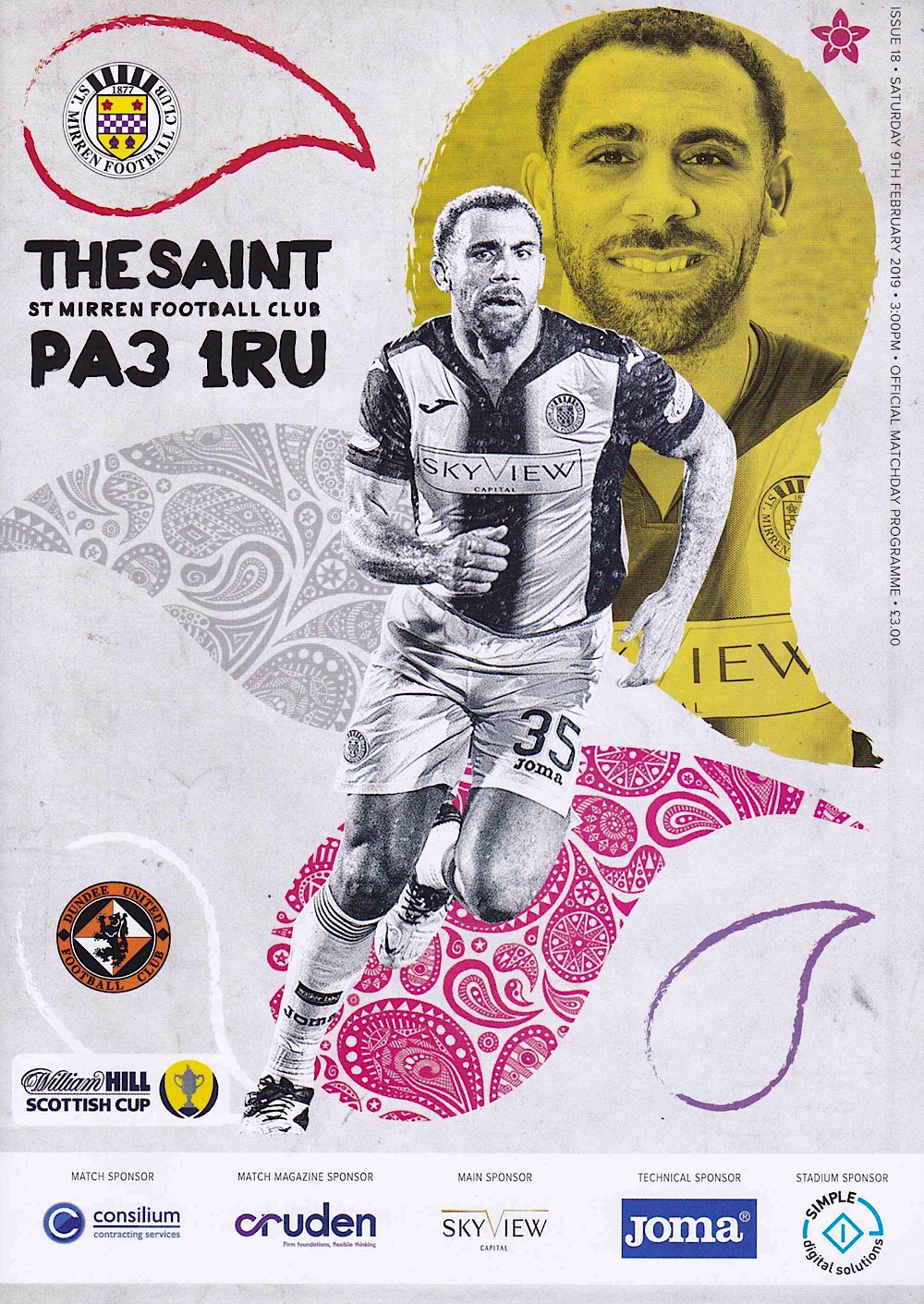 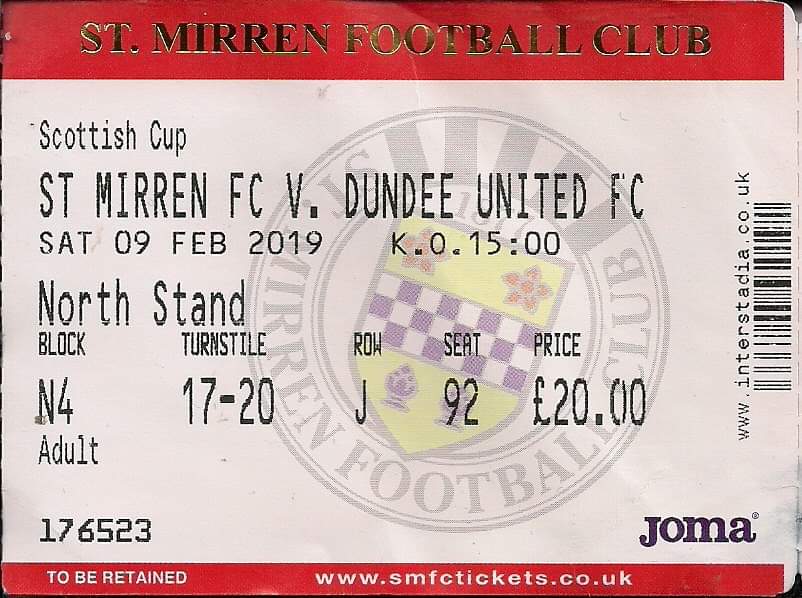 United progressed to the last eight of the Scottish Cup after a 2-1 win over Premiership side St Mirren in Paisley.

It had only been ten months since the two teams last met, but the massive turnover with both teams in the intervening time was illustrated by there only being two players starting in this game who also started in that game, with one of those players, Cammy Smith, having changed teams since then. Ryan Flynn was the other player who had started both games. Neither club had the same manager that they had that day, with the Buddies having made two managerial changes since United’s 1-0 win in April 2018.

There was only one change to the United side that had beaten Morton 2-1 in their previous game, with Jamie Robson coming in at left back to make his first start since September 2018, replacing the injured Callum Booth.

It took a mere three minutes for United to create the first chance of the game when Nicky Clark played in Ian Harkes down the right, although the American’s cross drifted out of play for a goal kick. The home side had their first chance after seven minutes with Greg Tansey striking from the edge of the area. However, the midfielder’s effort was routine for Ben Siegrist in the United goal. Some good play at the other end a minute later from Cammy Smith, Pavol Safranko and Peter Pawlett threatened to open the scoring for United, but the St Mirren defence were just about able to clear. In the tenth minute, United threatened again through Nicky Clark and Ian Harkes, but again the final ball was poor and the chance was gone.

The away side took the lead after 15 minutes. St Mirren goalkeeper Vaclav Hladky was forced into making two good saves, blocking a Nicky Clark header from a Charlie Seaman cross before getting in the way of Pavol Safranko’s follow-up. The St Mirren defence failed to clear the ball, which landed at the feet of Peter Pawlett 25 yards from goal. The winger fired in a low drive and Pavol Safranko stuck a leg out to divert the ball past Hladky and into the net to give the visitors an early lead.

The Slovakian striker nearly made it two a few minutes later but his attempted chip was foiled by Hladky, before Jack Baird cleared the ball behind for a United corner. The kick from Pawlett was headed just wide by Calum Butcher. St Mirren then had a couple of chances of their own, as Ryan Flynn’s rive was blocked by Mark Connolly, before Brad Lyons headed over the bar from a Greg Tansey corner. However, the bulk of the chances were coming at the other end. United should have grabbed a second goal in the 27th minute when Vaclav Hladky was again called into action to keep out Peter Pawlett after the winger was played through on goal courtesy of more poor St Mirren defending. Nicky Clark fired a shot at goal from the rebound, which Mihai Popescu deflected wide for another corner kick. Cammy Smith had a shot saved by Hladky a few minutes later, before Jack Baird found himself blocking shots from Peter Pawlett and Pavol Safranko in quick succession as the Championship side continued their dominance of the match.

On the stroke of half time, Dundee United doubled their lead. A long ball forward from Jamie Robson was not dealt with by the St Mirren defence. The ball found its way to Nicky Clark, who took one touch to control the ball before chipping Hladky with a lovely finish from around ten yards out. For the second straight week, United had a 2-0 lead at half time, and for the second straight week only a wonderful goalkeeping display had prevented United’s half time lead from being even greater.

The home side had it all to do in the second half, but they did start the half brightly as half time substitute Kyle McAllister had a go from long range, but his shot was blocked. It took eight minutes of the half for United to have their first chance, when Ian Harkes tried to play Peter Pawlett through on goal, but the American took a heavy touch and the ball drifted through to Vaclav Hladky in the St Mirren goal. Ten minutes into the half, Kyle McAllister again looked dangerous for the home side as he floated a ball into the box for fellow substitute Simeon Jackson, but the striker’s header from a tight angle was clawed away by Ben Siegrist.

Two controversial incidents around the hour mark were to have a huge bearing on the rest of the game. Thirteen minutes into the half, Saints captain Paul McGinn caught Cammy Smith on the jaw with a forearm smash which, amazingly, Willie Collum deemed to only be a yellow card offence despite having a great view of the incident. Then four minutes later, it was United who would be reduced to ten men, with Calum Butcher being dismissed for a high and heavy challenge on Ryan Flynn. United were still nursing a sense of grievance from the McGinn tackle a few minutes earlier, although Butcher was certainly guilty of dangerous play and fully deserved his red card. McGinn and Flynn had just combined in a good flowing move which saw the St Mirren right back fire a low drive just past the post, and galvanised by the United red card, the home side began to dominate proceedings.

The Buddies nearly found a way back into the game a mere minute after the red card when Mihai Popescu crashed a shot off the underside of the bar after meeting a cutback from Paul McGinn, and with the ball bouncing around in the United penalty area Mark Reynolds was able to hoof the ball clear. St Mirren were continuing to create chances, and the next to threaten was Brad Lyons as he cut on from the left, but he could only fire his shot high and wide of the United goal. Simeon Jackson then tried his luck from an almost identical situation after he cut in from the left, but the result was also almost identical as the striker fired his shot wildly over the bar. Jackson then had a shot charged down by Charlie Seaman after being played in on goal by a through ball from Mihai Popescu as the home side looked to get a goal back.

With thirteen minutes to go, St Mirren did get a goal back. Ben Siegrist made a wonderful save from a 25 yard Cammy MacPherson drive, but the ball fell to Duckens Nazon on the edge of the United area. The Haitian striker, who had been linked with a move to United in the January transfer window, found himself space before firing in a low shot which was going wide before it took a massive deflection off Mark Connolly, which wrong footed Siegrist and diverted the ball into the net.

St Mirren had United pinned back for the remainder of the game, but the United defence were able to contain the waves of attacks from their opponents, and by and large the United goal was not directly threatened. The best chance of the closing stages came at the other end, when United substitute Osman Sow fired in a low drive which Vaclav Hladsky tipped wide for a corner kick. United were able to see the game out without too much fuss for a great win against a side from a higher league, and as a result went through to the Scottish Cup quarter finals for the first time since 2016. 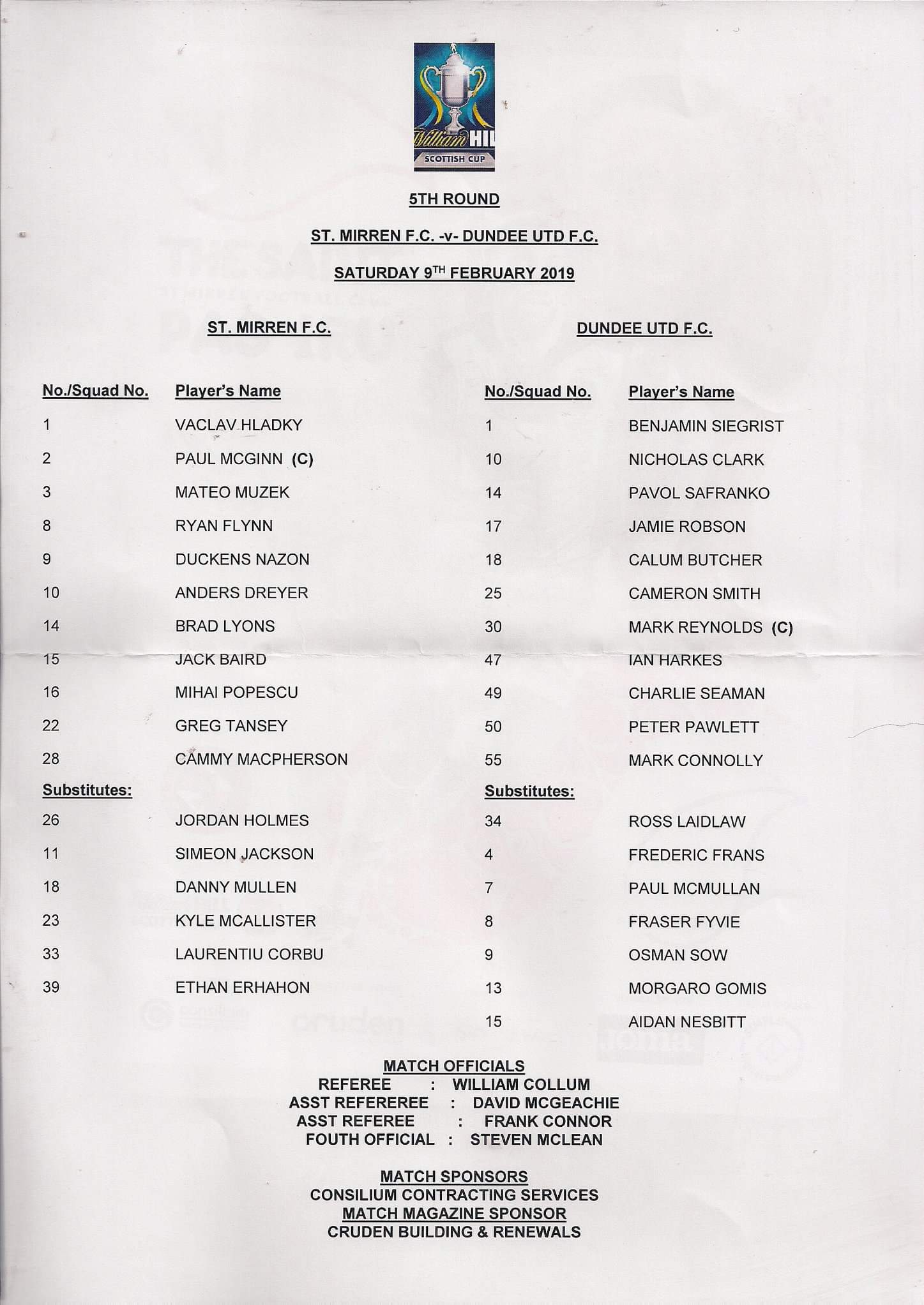