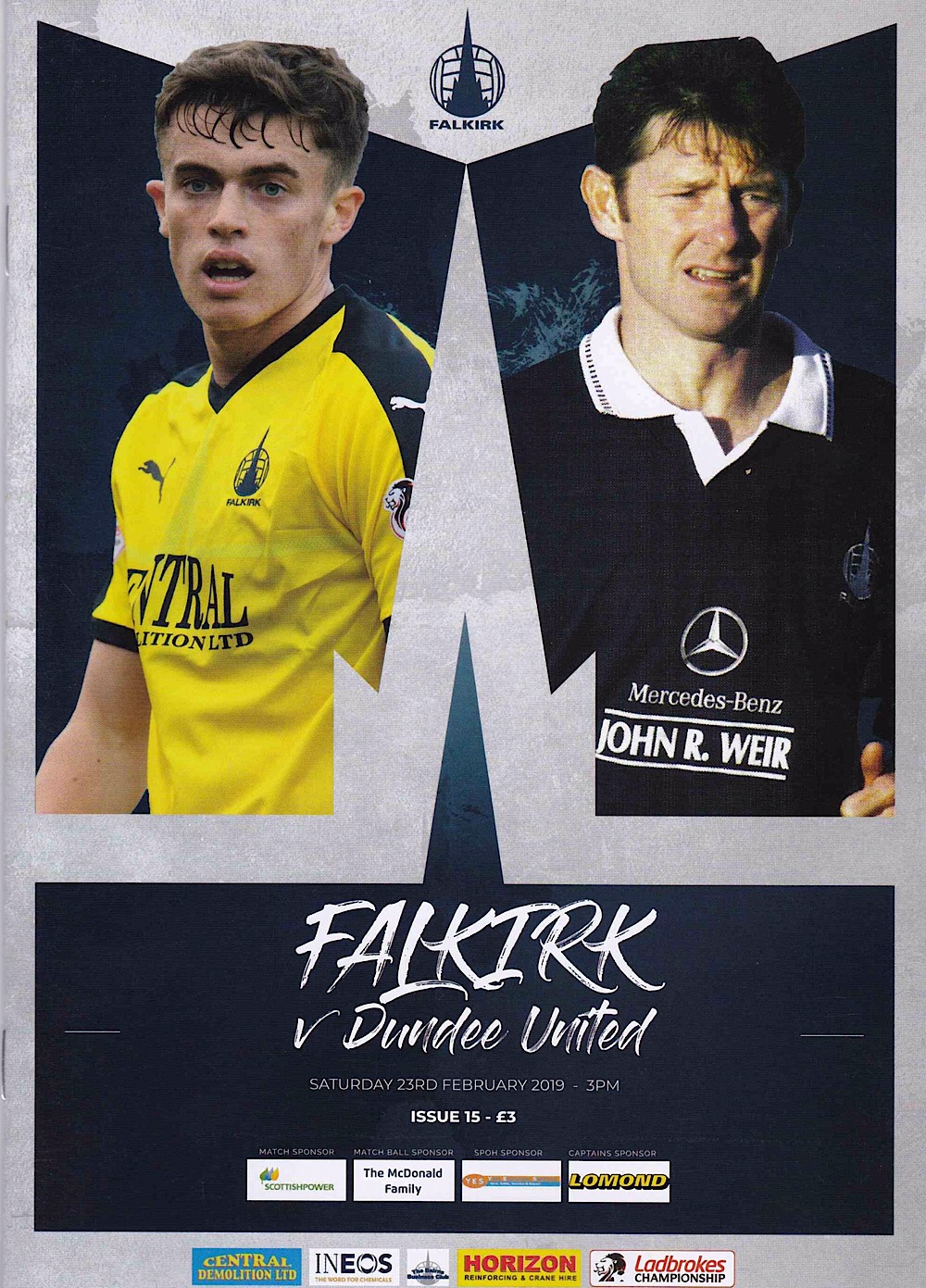 United faced their third away game in three weeks as they travelled to the Falkirk Stadium to face a resurgent Falkirk FC.

United went into the match on a good run, having won their three previous matches. Head coach Robbie Neilson made three changes from the side which had beaten Queen of the South in United’s previous game, with Calum Butcher, Cammy Smith and Mark Connolly returning to the starting line up. Rachid Bouhenna, Morgaro Gomis and Paul McMullan all dropped to the bench. Mark Reynolds remained unavailable for selection due to the artificial surface at the Falkirk Stadium.

Despite their lowly position in the league, Falkirk were on a good run of their own, having won their last two matches, and were unbeaten in all competitions in the year 2019, underlying the good work done by former United manager Ray McKinnon after an awful start to the season under previous manager Paul Hartley.

United started the game by far the stronger team, and created several chances in the early stages. A free kick from deep by Peter Pawlett in the second minute of the game was the first chance, although no United player could latch on to Pawlett’s delivery. Cammy Smith did manage to win United a corner a few seconds later, however, and from the resultant corner was headed onto his own crossbar by Falkirk defender Ciaran McKenna, before Pavol Safranko blasted the rebound well over the bar.

In the 9th minute United had another set piece chance after former United played Paul Dixon was adjudged to have fouled Safranko in the middle of the Falkirk half. Peter Pawlett swung the ball into the box where it was met by the head of Frederic Frans, but the Belgian centre half did not get enough on the ball and his header drifted wide. Falkirk forced a corner at the other end a minute later, from which Ben Siegrist claimed the ball and his quick thinking sent United away on a counter attack. Ian Harkes found Cammy Smith who cut the ball across the box. However, the cross from the former St Mirren player evaded everyone and the Falkirk defence were able to clear the ball. Charlie Seaman got himself into a good crossing position on the right a couple of minutes later, but his cross-field pass was rather ambitious and sailed way over the head of fellow full-back Jamie Robson on the opposite flank.

There was a blow for United on the 20th minute as Frederic Frans sustained a groin injury after hurting himself stretching for a ball. The Belgian defender looked in severe pain and was replaced by Rachid Bouhenna. United almost took the lead after play restarted, with Pavol Safranko challenging the Falkirk goalkeeper Harry Burgoyne under a high ball into the box. Neither player was able to get a decisive touch and the ball bobbled around on the six yard line before being cleared.

Although United were probably the better side at this stage, chances were rather at a premium. Davis Keillor Dunn did find himself in space in the United penalty area in the 30th minute but could only head the ball weakly past the post. A goalmouth scramble ten minutes before half time saw a rare chance for the away side, with several players trying to get something on the ball as it bounced around on the six yard line. Eventually Pavol Safranko was able to get a shot away but in the end it was an easy save for Harry Burgoyne.

Falkirk had a couple of further chances before half time. With five minutes left in the half, Ian McShane curled a wonderful free kick towards goal from 20 yards out, but saw himself denied by an excellent save from Ben Siegrist, who was somehow able to tip the ball over the bar. The United keeper nearly ruined his good work from the resultant corner as he got caught under the ball, but luckily Falkirk were unable to take advantage of his error and the first half ended goalless.

Three minutes into the second half, Dundee United took the lead. Jamie Robson made an excellent break down the left hand side and, after a one-two with Pavol Safranko, got to the bye line and cut the ball across goal to where Cammy Smith was waiting for a tap-in into the empty net. It was Smith’s first goal of his second spell at Dundee United. The away side should have got a second goal a couple of minutes later, this time through Pavol Safranko breaking down the right. His cutback to Peter Pawlett was perfect, but Pawlett could only blaze the ball over the bar.

United were not able to capitalise further on that goal, and although they continued to have the lion’s share of possession, no further chances were forthcoming. In fact, Falkirk came close to equalising a couple of times. With fifteen minutes gone in the half, Rachid Bouhenna got into a terrible mess on the edge of his own penalty area, although much to his relief he was able to regain his composure and complete the clearance under pressure from several Falkirk players. The home side had another chance from a corner kick a few minutes later through a header from substitute Aaron Jarvis that was fortunately straight at Ben Siegrist.

United brought on Osman Sow for Pavol Safranko, and the substitute nearly created a second goal for United a few minutes later as he slid the ball through to Nicky Clark, although the striker was unable to get a shot away and the chance was snuffed out. United the had to make their second enforced change of the game as Rachid Bouhenna picked up a nasty looking facial injury and was replaced by Morgaro Gomis, who slotted into midfield with Calum Butcher dropping back into defence.

Falkirk got an equaliser with six minutes to go. It did come about in slightly strange circumstances as, after play was stopped to allow Morgaro Gomis to receive treatment, a drop ball in the middle of the United half was contested by Peter Pawlett and former United midfielder Paul Paton. Pawlett fouled his opponent and gave away a free kick. The set piece was floated towards the penalty area by Ian McShane, and Ben Siegrist charged from his line to try and punch clear. However, he was never realistically going to get to the ball, and was left in no man’s land as Ciaran McKenna nodded past the stricken goalkeeper and into the net.

There were chances at both ends as the game drew towards a close as both sides chased a winning goal. With three minutes left Ian Harkes smacked a shot at goal which was blocked by a defender’s head. Osman Sow picked the ball up out wide and sent in a poor cross which was straight at Harry Burgoyne. However, the Falkirk goalkeeper let the ball slip through his hands but luckily for him the ball dropped wide of the post rather than into the net. At the other end, Deimantas Petravicius was able to twist and turn in the United penalty area before unleashing a shot that looked as if it would end up in the net, only for Jamie Robson to launch himself at the ball. The United left back was able to get the block in and a winning goal was prevented. United held on for the point, which was a disappointing result after losing such a late goal but it could have been worse if not for Robson’s heroics.

The draw extended United’s unbeaten run to four games in all competitions, and the point brought them level with Ayr United in second place in the Championship. However, the gap to Championship leaders Ross County extended to five points after the Staggies beat Partick Thistle 4-2 in a comeback win at Firhill. 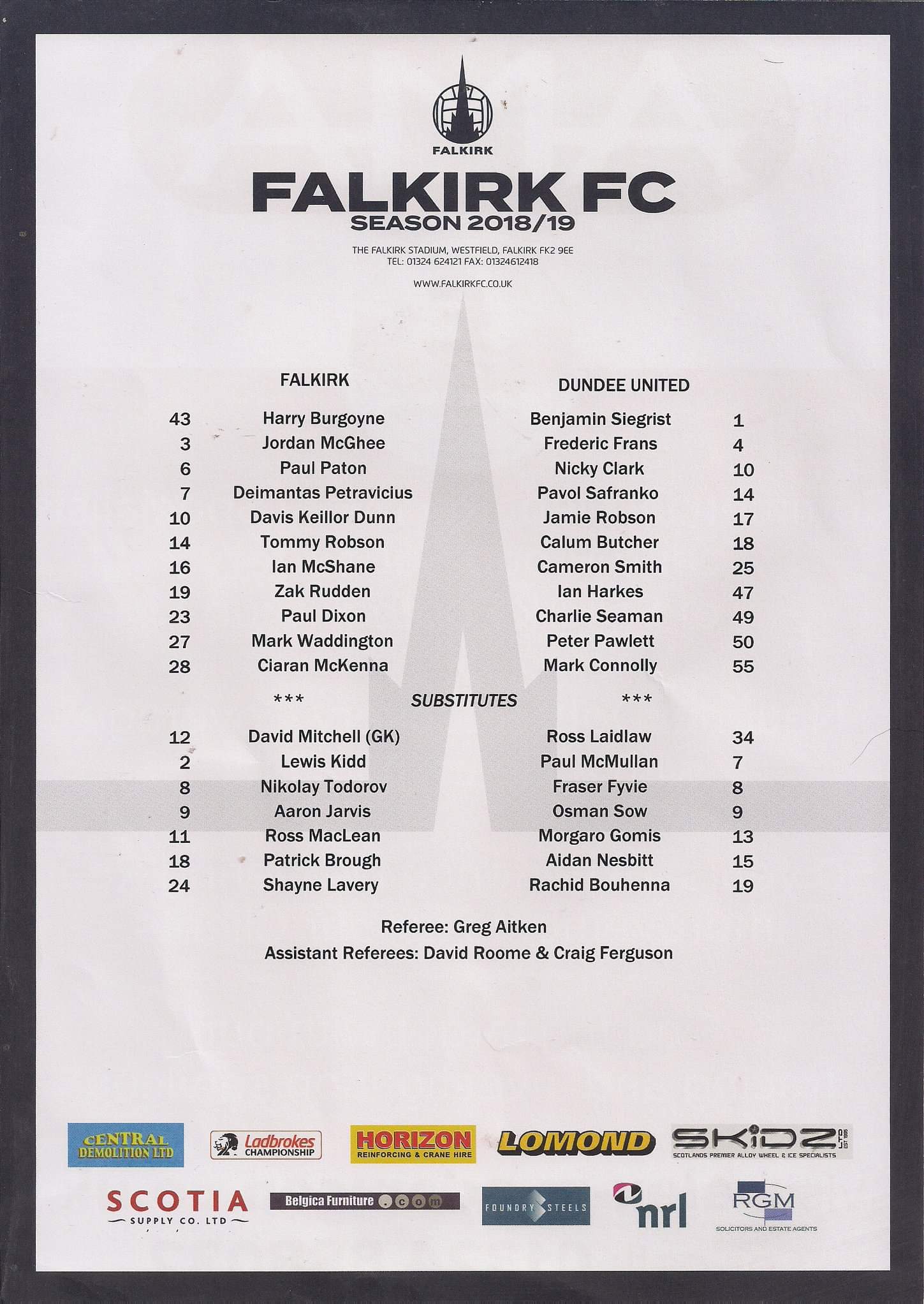