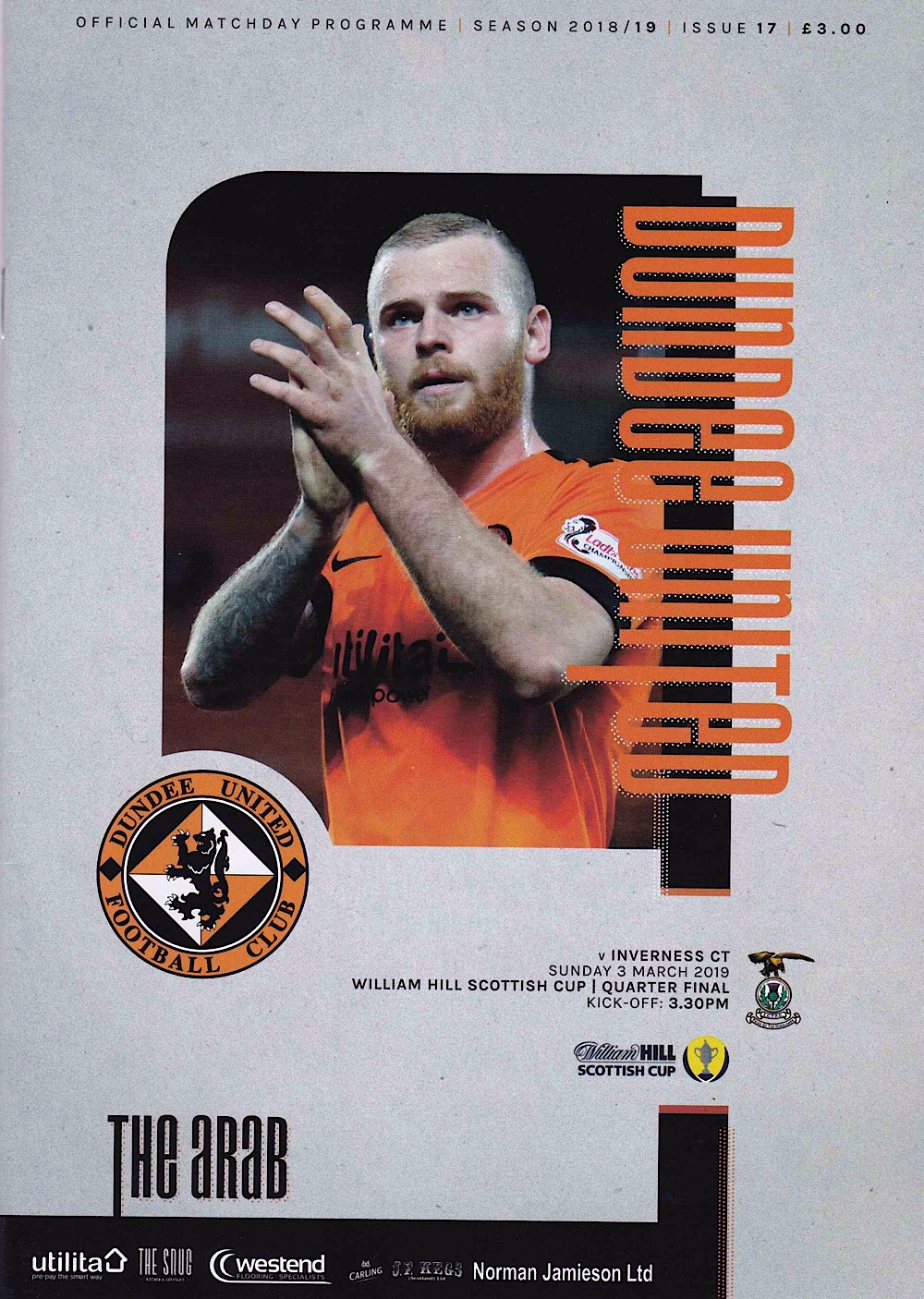 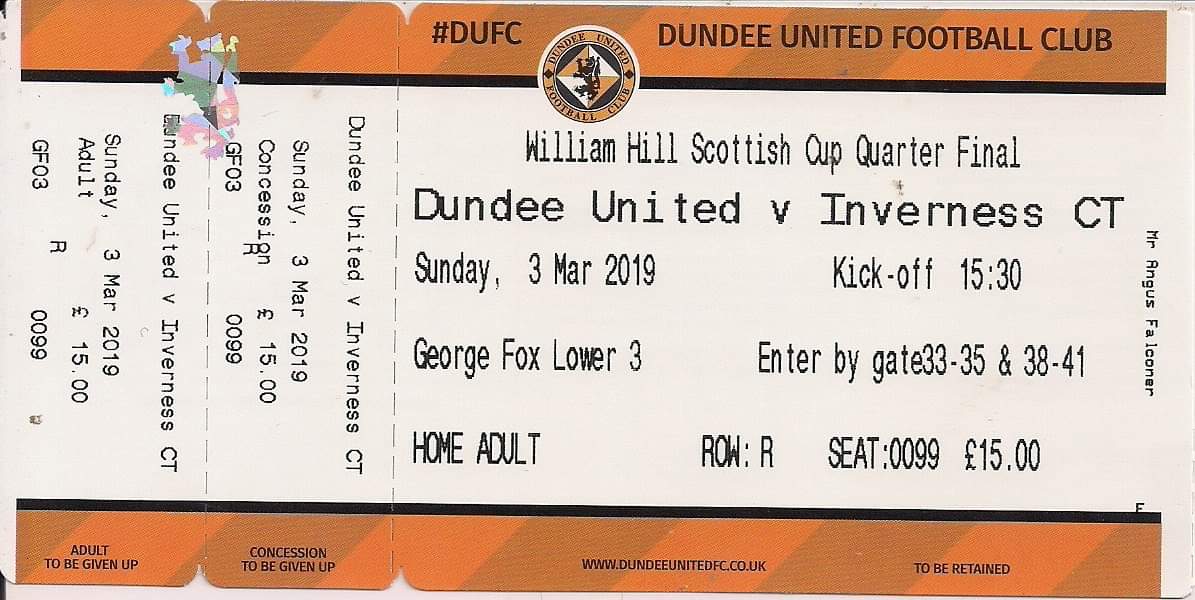 For the second time in five days, Dundee United faced a home game against Inverness Caledonian Thistle. After the 1-0 league victory over the Caley Jags on the preceding Tuesday, United faced the same opponents in the Scottish Cup quarter final at Tannadice.

Robbie Neilson made only two changes from that victory over Inverness, with Cammy Smith and Fraser Fyvie replacing the benched Paul McMullan and the injured Calum Butcher. The away side made three changes from that game, with Carl Tremarco, Jamie McCart and Aaron Doran replacing Shaun Rooney, Nathan Austin and Kevin McHattie.

Although United had been the better side in Tuesday night’s victory, this was to prove a very different game as the Caley Jags completely dominated the first half. Their first chance came in the third minute of the game when Coll Donaldson’s long ball was controlled by Jordan White. The Inverness striker laid the ball off to Aaron Doran, but the Irishman’s low shot was parried by Ben Siegrist out for a corner kick. The United goalkeeper was again forced into action from that corner as Carl Tremarco’s low header was saved.

In the sixth minute the away side had another chance, this time from a free kick after Ian Harkes took out Aaron Doran 30 yards from goal. Liam Polworth chipped the free kick into the United box, and Jordan White met the ball with a header but he was unable to get his effort on target and the ball flew over the bar.

Inverness had the next chance a few minutes later, and again it was striker Jordan White causing the problems as he broke through on goal, forcing Siegrist into a rather unconvincing clearance on the edge of his own penalty area. The ball broke to Liam Polworth who tried to chip the United goalkeeper, but luckily for United he did not get enough height on his attempt and Siegrist was able to pluck the ball out of the air. White saw another header fly over the bar a few minutes later as the away side continued to make all the running.

Inverness got the goal they deserved in the 19th minute. Joe Chalmers picked the ball up on the right hand corner of the United penalty area. He cut inside onto his left foot and curled a wonderful shot into the top corner of the net, giving Ben Siegrist no chance. Chalmers nearly got a second goal within two minutes as he met a deflected Aaron Doran cross on the volley 10 yards from goal, but although his shot beat Siegrist it cannoned off the underside of the crossbar and to safety.

Within a minute United had created their first chance of the day as Jamie Robson fed Peter Pawlett on the right and his cross sailed just wide of the far post of Inverness goalkeeper Mark Ridgers. Pawlett had another chance from a similar position a few minutes later, but his low shot at goal was blocked superbly by Carl Tremarco. Charlie Seaman was the next to break forward for United but despite getting into a good crossing position on the right his touch was poor and the ball drifted behind for an Inverness goal kick.

Ian Harkes blasted a shot over the bar with seven minutes to go until the break, and then on the stroke of half time Charlie Seaman played the ball into the six yard box. The Inverness defence were able to clear the ball out for a corner, from which Fraser Fyvie blasted the ball over the bar from the edge of the penalty area, bringing the curtain down on a desperately disappointing first half for the Terrors.

The second half initially progressed in the same way as the first half had, with United distinctly second best for long spells. However, it took ten minutes for the away side to carve out their first chance, and it came after United had conceded a free kick out wide on the left after Carl Tremarco had been dragged to the floor by Peter Pawlett. Liam Polworth had a shot at goal from the set piece which forced a good save from Ben Siegrist, who was also able to block the follow up on the rebound from Joe Chalmers. Inverness forced a corner kick on the hour mark after Mark Connolly was forced to block a goalbound shot from Liam Polworth, who had been played in on goal by good play from Aaron Doran. From that corner the ball dropped to Jamie McCart, but the home defence were able to block his shot. The next Inverness player to threaten the United goal was Charlie Trafford, as the midfielder struck a ferocious shot from 30 yards out which flew just wide of the post.

Midway through the second half, United got a rather unlikely equaliser, and as in the previous game against Inverness the goal came from the penalty spot. It started when United substitute Paul McMullan hit a shot from 25 yards out which Mark Ridgers had to deflect wide. From the corner kick, the ball broke to Paul McMullan, who went down under a challenge from Jordan White. If there was any contact, it looked to be minimal, but the referee Steven McLean pointed to the spot. The Inverness players were furious with the decision, with Coll Donaldson being booked for his protests. When all the objections died down Nicky Clark again took the responsibility, and he fired the ball past Mark Ridgers into the bottom left corner of the net to make it two penalty goals against Inverness for the week.

Inverness responded almost immediately when Jordan White beat the offside trap after running onto a threaded pass from Liam Polworth but his shot was blocked by Ben Siegrist. The United goalkeeper looked rather less convincing with twelve minutes left to play when he rushed from his line to try and get to a through ball before the onrushing Aaron Doran. The Inverness player got there first but the ball deflected off Siegrist and then back off Doran and drifted wide for a goal kick. With seven minutes left there was a huge let-off for United when Inverness substitute Nathan Austin headed Sean Welsh’s free kick into the net. However, the striker was ruled to be offside, which replays showed to be an incorrect decision. United went up the other end and Nicky Clark saw a header from a Paul McMullan cross flash just wide.

Just as it looked as if both teams would have to settle for a replay, Inverness grabbed a winner in stoppage time, which even the most ardent United fan would surely admit they deserved on the balance of play. A long throw on the right hand side from Brad McKay was flicked on by Jordan White, and as the United defence stood statuesque Aaron Doran nipped in to head the ball past Ben Siegrist and into the net. It was yet another example of United’s vulnerability in defending set pieces, and they had no time to respond before Steven McLean blew the full time whistle. Inverness Caledonian Thistle had sealed a semi final place in the Scottish Cup against either Hearts or Partick Thistle, and Dundee United were left to reflect on yet another inept performance in a big game in front of the TV cameras. 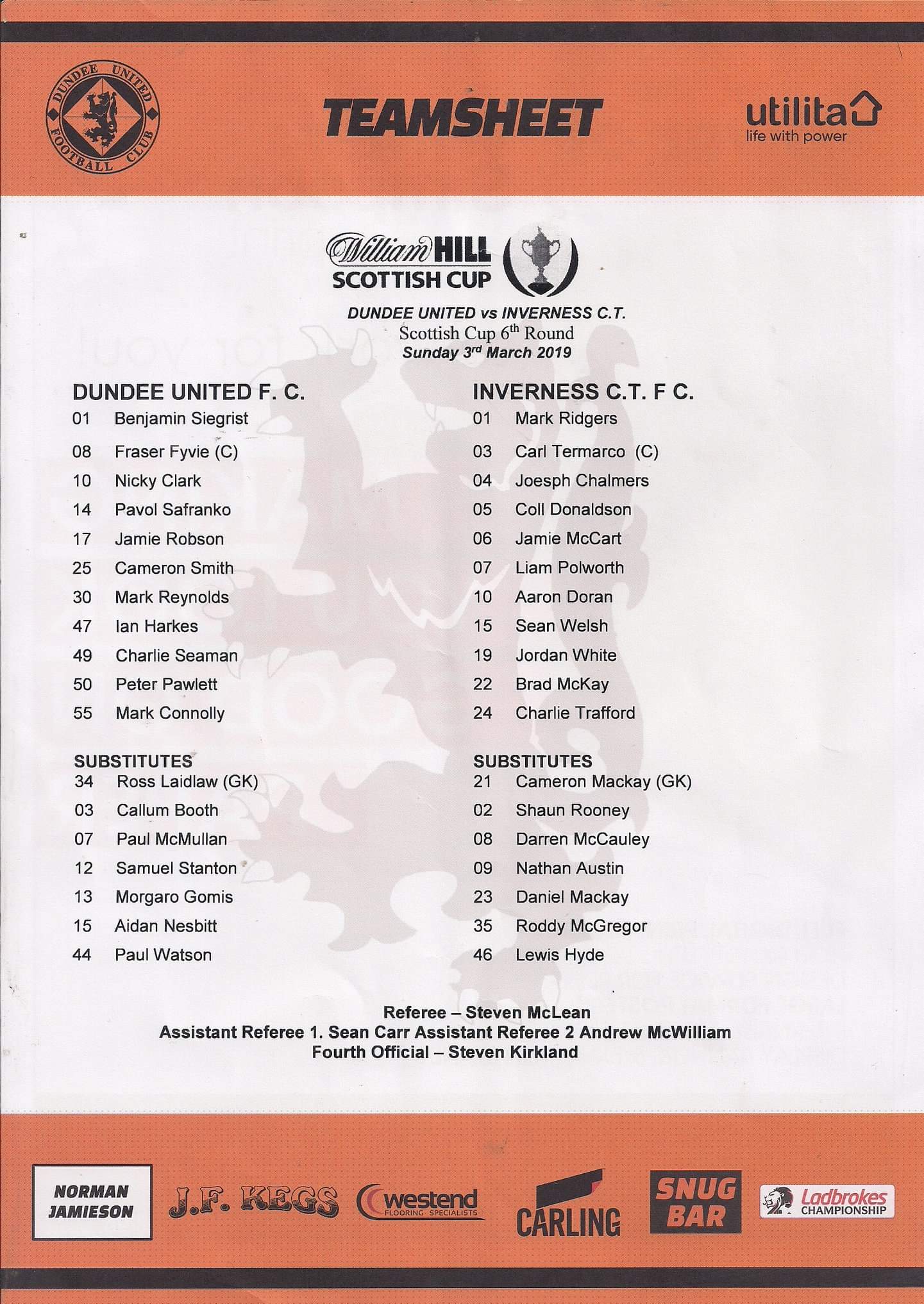 For the second time in five days, we welcome John Robertson and his side back to Tannadice. Whilst league points were up for grabs on Tuesday, the attention now switches to the Scottish Cup. All the focus may have been on our goal of promotion, but it is really important that we get as far as we can in this competition. It will be the fourth meeting of the teams and there has been very little between the sides, so we know another very difficult match is in prospect. After two draws earlier this season, we edged last Tuesday's contest by the narrowest of margins which was a bit frustrating. We had several opportunities early in the game but failed to take them. Then we went ahead thanks to Nicky Clark's free-kick with a quarter of the game remaining, but when you are only a goal up, there is always nervousness there and all it needs is one mistake-maybe a flick-on or someone not tracking back - and the other team are back in the game.

Nicky took the penalty well but we need to put teams to bed and it was frustrating that we didn't kill the game off. That made it edgy. But the important thing was that we got the three points, especially as Ross County beat Ayr United, enabling us to claim second place. However, all that is on the back burner this afternoon as we wrestle with Caley Thistle for a semi-final spot. The fact that we are meeting then so soon after the league clash makes no difference, it is just another important game. In any event, slightly different teams will be facing each other. For our part, we are without Calum Butcher as he is suspended, but with Fraser Fyvie and Morgaro Gomis available, we have more than adequate cover. What I do know is that we are in for equally as hard-fought and tight a game as last Tuesday which was the first time. one team has come out on top in the three meetings. The Club has enjoyed Scottish Cup wins a couple of times and we know how much means to you the fans and hopefully with your backing this afternoon, we can take another step towards a day out at the National Stadium next May.