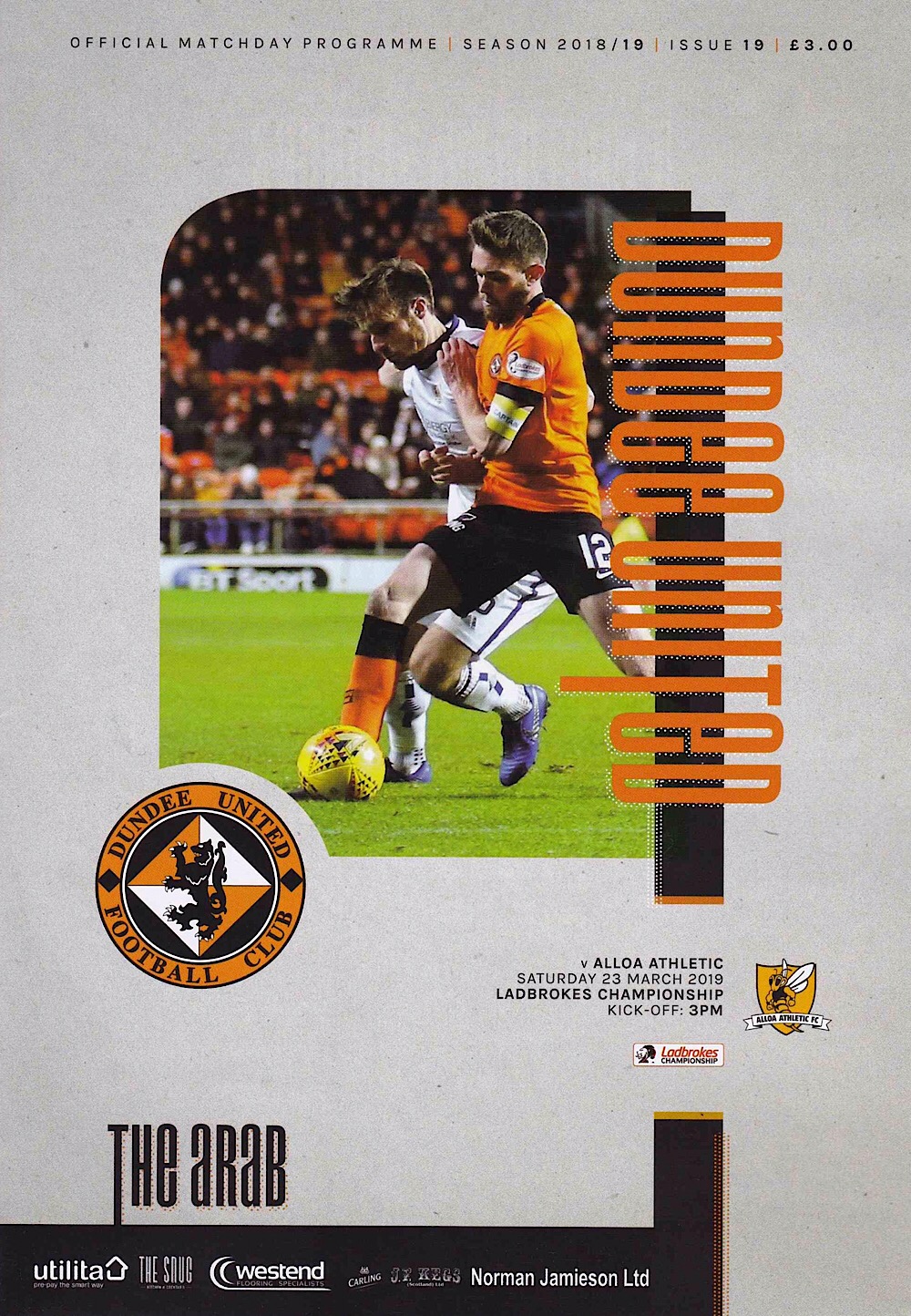 United went into their home game with Championship bottom team Alloa Athletic knowing that a win would bring them to within five points of leaders Ross County. However, they knew it would be a tough game given that this was the sixth meeting of the two teams this season with United only having won one of the previous five games.

United head coach Robbie Neilson made two changes from the starting eleven who beat Ross County during the week, with Rachid Bouhenna and Cammy Smith coming in for the injured Mark Connolly and the benched Peter Pawlett. United started with the same eleven players who had finished the Ross County game. Striker Pavol Safranko was still on international duty, and indeed he made a brief appearance in Slovakia’s 2-0 win over Hungary a couple of days before this match.

It was a slow start to the game, with a long ball from Paul Watson which Paul McMullan nearly latched on to being an early highlight, but the game sparked into life after six minutes when the visitors took the lead. It began with a Dario Zanatta shot from distance which was parried by Ben Siegrist, who them had to look lively to block the rebound from Alan Trouten. However, Alloa scored from the resultant corner when the United keeper failed to hold the delivery from Iain Flannigan and dropped the ball, and as he forlornly chased after the loose ball as it bobbled around, the ball was passed to Jordan Kirkpatrick who beat Siegrist to the ball to give the Wasps an early lead.

United tried to hit back immediately and Paul McMullan broke forward before seeing a shot blocked by Andy Graham. Rachid Bouhenna then saw a shot from distance go wide of the post before Calum Butcher’s attempt to score a second goal in as many games was foiled from a Cammy Smith corner as he saw a couple of efforts on goal blocked, before Paul Watson had a deflected shot tipped over the bar by Alloa goalkeeper Neil Parry.

The home side continued to have the bulk of possession but were struggling to get back into the game, and the next chance came for Alloa when Jordan Kirkpatrick had a shot from 30 yards out, but he was unable to get his second goal of the game as his attempt went high over the bar. United then conceded another corner kick after a poor back pass from Rachid Bouhenna drifted wide, although this time Siegrist was able to punch clear under pressure from Jon Robertson’s delivery.

On the eighteenth minute United broke forward and won a free kick on the edge of the Alloa penalty area when Sam Stanton was fouled by Iain Flannigan. Callum Booth had scored a free kick against Alloa in the previous meeting between the teams, but this time his effort smashed off the Alloa wall before Nicky Clark’s volley on the rebound was headed clear. There was a scare for the home side soon afterwards when Dario Zanatta was played through on goal, but much to the relief of the United faithful the Hearts loanee was rather harshly flagged offside.

United were struggling by this stage, but after 26 minutes they got a lucky break when an own goal levelled the game. As with so many recent United goals it came from a set piece. Liam Dick fouled Paul Watson wide on the United right. Jamie Robson sent the ball over, Nicky Clark and Alloa captain Andy Graham both went for the ball, and the ball came off the unfortunate Alloa player and into the net. The goal seemed to galvanise United, and five minutes later Cammy Smith was unfortunate to see a low shot from the edge of the penalty area blocked, and Sam Stanton had a shot from a similar range saved well by Neil Parry a couple of minutes later. Calum Butcher was the next to try his luck from distance with nine minutes to go until half time with a 30 yard shot that had Parry scrambling, but the Alloa keeper was able to make the save and smother the ball just before Nicky Clark could latch on to the rebound.

With a couple of minutes to go before the break Cammy Smith was forced off by injury to be replaced by Peter Pawlett, and then on the stroke of half time Rachid Bouhenna saw another shot from distance sail just over the bar when the ball broke to him on the edge of the Alloa penalty area from a United corner kick. Dario Zanatta still had time to head a good chance from a few yards out over the bar at the other end before referee Nick Walsh blew his half time whistle.

The second half continued in much the same vein as the first half had, with Dundee United having the bulk of the ball, although the visitors were continuing to cope with the pressure and they were defending well. Peter Pawlett had a couple of corner kicks that Alloa goalkeeper Neil Parry was able to hold on to. Jamie Robson and Callum Booth were combining well on the United left, and Peter Pawlett was being a nuisance on the opposite flank. Four minutes into the half, a Paul McMullan shot was deflected wide, and a few minutes later a Peter Pawlett cross was headed just over the bar by Paul Watson. Pawlett was continuing to be the main danger man for United, and a couple of minutes later he played a good pass through to Callum Booth which brought about another United corner. The set piece found the head of Calum Butcher, but the Englishman could not score his second goal in as many games as he failed to steer his header on target. A minute after that, Paul McMullan picked out Peter Pawlett on the edge of the area, but the former MK Dons winger could only fire the ball over the bar.

United were dominating the game, but twenty minutes into the half brought a scare at the other end when an Iain Flannigan free kick founds its way through to Jordan Kirkpatrick. However, he could not double his tally for the afternoon and his header was well saved by Ben Siegrist. At the other end a minute later, United were only prevented from taking the lead by a wonderful save as Paul McMullan crossed for Paul Watson whose header looked for all the world that it would hit the net, but somehow Neil Parry managed to get a hand on the ball and clawed it away. Jamie Robson was then able to break away down the left, taking on and beating two Alloa defenders as he did so, but his cross was cleared by Andy Graham.

As the game entered the final ten minutes, it looked like United were beginning to run out of ideas. However, United grabbed a valuable second goal with seven minutes left to play. Jamie Robson played in Callum Booth down the United left. Booth slid the ball across the United penalty area to Nicky Clark at the back post, and the United striker tapped the ball into the net past Neil Parry.

The match passed without further incident aside from a late shot from Peter Pawlett which went over the bar, and United held on for a win which, if not being entirely convincing at times, was a huge result in the context of the title race. The win took United to within five points of Championship leader Ross County, and a full nine points ahead of Ayr United in third place, although both clubs had games in hand over the Terrors. 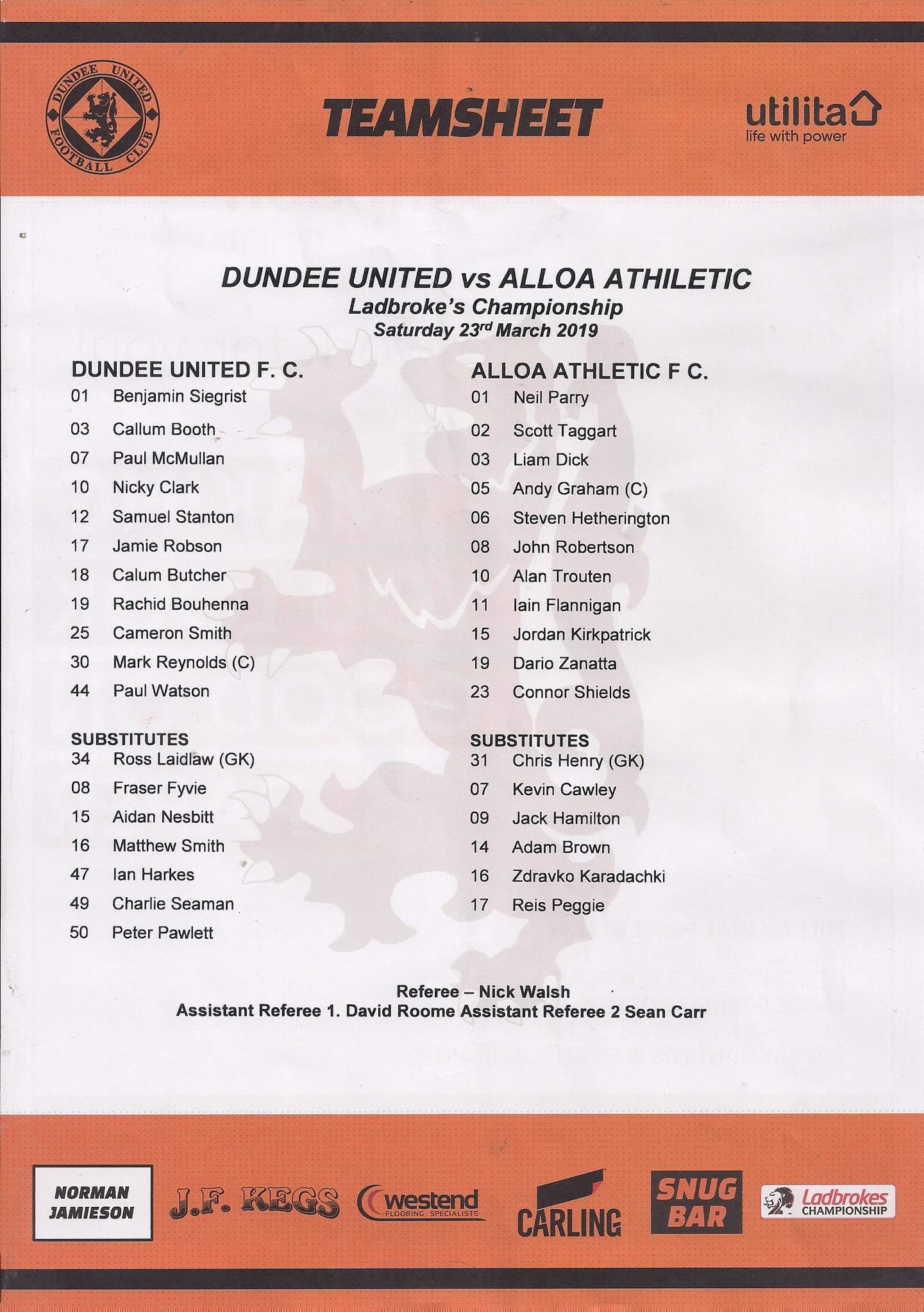