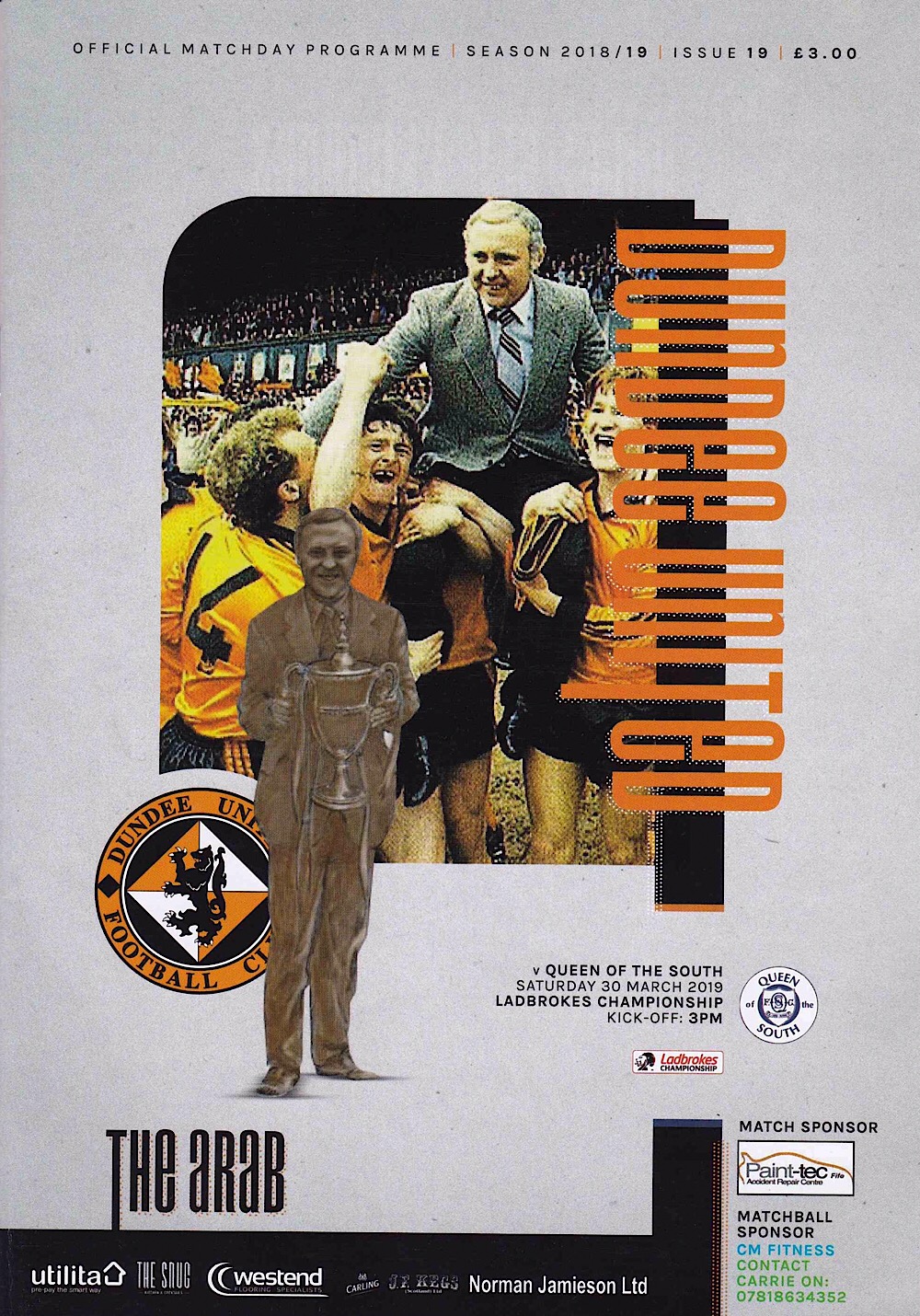 After a run of three straight wins which had brought them to within two points of Ross County at the top of the championship table, Dundee United suffered a hugely disappointing result when they lost 2-1 at home to Queen of the South. While United were no worse off after the game due to Ross County’s defeat to Alloa Athletic, games were fast running out and United could not afford to drop any points as they sought to increase the pressure on the Staggies at the top of the table.

United made two changes to the starting line up which had beaten Dunfermline at East End Park on their last game, with Nicky Clark and Sam Stanton replacing Ian Harkes and goalscorer Peter Pawlett. Queen of the South went into the game on a run of seven straight defeats, a run which had seen them sink towards the bottom of the Championship and in severe danger of being drawn into a relegation battle.

Despite that poor run, the visitors started the game very well, pinning United back in the first few minutes. In the first couple of minutes Calum Butcher had to look sharp to cut out a Lyndon Dykes pass before it reached Stephen Dobbie, and a minute later Jordan Marshall sent a good ball through to Ian McGrath, but Rachid Bouhenna was able to get a foot to the ball before the United defence cleared the ball.

United’s first foray up the park came after eight minutes when Michael Doyle gave away possession. Nicky Clark saw a shot blocked against his former club and then on the rebound Pavol Safranko saw a shot deflected wide. Four minutes later, Safranko spurned a great opportunity to give United the lead when Paul McMullan broke down the right. After playing a one two with Sam Stanton, the United winger broke through on goal. His fierce shot was blocked on the line by Queens keeper Jack Leighfield, and the ball broke to Safranko. However, with the goal gaping he could only hit the ball straight at the stricken goalkeeper and the chance was gone.

Sam Stanton had an effort on goal from 25 yards out a few minutes later but the ball sailed over the bar. After Charlie Seaman forced a corner kick soon afterwards Pavol Safranko had another chance, but his header towards goal was cleared off the line by Jordan Marshall. Queen of the South broke up the park and the ever-dangerous Stephen Dobbie forced Ben Siegrist into action with a powerful low shot which the United keeper did well to hold. United then broke up the park themselves, leading to a Callum Booth shot that the Queens defence were able to block.

United continued to pile the pressure on, and Sam Stanton had another attempt on goal which was more effective than his previous attempt, his low shot forcing Jack Leighfield to tip the ball around the post. Callum Booth then tried his luck again after latching on to a good pass from Jamie Robson. Despite being on the receiving end of a couple of robust challenges, he managed to stay on his feet and get a cross away. The cross was blocked for a corner kick, from which Paul McMullan became the latest player to have a shot at goal, which again was blocked, this time by the back of Lyndon Dykes.

There was a scare for United with ten minutes left until the break when Ben Siegrist rushed from his line to meet a long ball. He beat Stephen Dobbie to the ball but his clearance fell to Andy Stirling 40 yards from goal. However, Stirling rather fluffed his lines and the ball dribbled wide of the exposed goal. Dobbie had a chance of his own a couple of minutes later, but Siegrist was able to make the save. Another chance came and went for United three minutes before half time through Charlie Seaman. The right back broke forward but his cross was blocked. From the resultant corner, the ball again fell to him but his shot on goal was deflected just wide. The first half ended goalless despite United’s domination.

A sucker punch was always a possibility give how well United had played without scoring, and it duly came with six minutes gone in the second half. Stephen Dobbie robbed Sam Stanton in midfield and broke forward. He played a one two with Lyndon Dykes and darted into the United area, where his run was ended when Paul McMullan barged over the striker as he ran through on goal. Dobbie took the resultant penalty kick himself and drilled the ball into the corner to give Ben Siegrist no chance and give the Doonhamers an unlikely lead.

United responded well to going behind, and were unlucky not to equalise a few minutes later. Jamie Robson swung in a cross from the left hand side. The ball was met by Pavol Safranko, but his header smacked off the post. The ball rebounded and hit the back of the prone Jack Leighfield, but to United’s disappointment the ball trickled just wide.

However, with twelve minutes gone in the half, remarkably the away side took a two goal lead. Again, Dobbie was the architect as he brilliantly flicked the ball through to Lyndon Dykes, who ran through on goal before nutmegging Ben Siegrist from a tight angle to double the lead. Both goals had come against the run of play, but despite that they both came about through brilliant link up play between Dobbie and Dykes which belied the poor run Queen of the South had been on.

It could have got even worse for United in the 61st minute when Queen of the South hit them on the counter attack and Josh Todd cut inside and found himself faced with only Ben Siegrist to beat, but Todd was rather wasteful as he hammered his shot over the bar. Two minutes later, only a save from Siegrist foiled Lyndon Dykes after the striker was again played in on goal by his strike partner Stephen Dobbie.

There was a ray of hope for the home side with twenty minutes left as they managed to get a goal back. Peter Pawlett picked the ball up on the United left from a Pavol Safranko throw in, and the winger launched a cross to the back post which Nicky Clark somehow managed to get his head to and diverted the ball past Jack Leighfield in the Queens goal.

The goal gave United renewed impetus, although the attempt by Pavol Safranko to win a penalty a couple of minutes after the goal was optimistic in the extreme as the Slovakian hit the deck in the penalty box under minimal pressure. Soon afterwards, a cross from the left from Jamie Robson just evaded Nicky Clark at the back post, before Safranko sent a header wide of goal from the subsequent corner kick. Three minutes later, Paul McMullan sent a fine cross into the box that just evaded Safranko at the back post. Mark Reynolds was the next United player to try his luck, but his attempt at a shot from 35 yards out trundled well wide of the goal.

Not all the action was taking place at that end of the ground, however, and Stephen Dobbie continued to torment the home defence, managing to beat Mark Reynolds three times on the bye line on one memorable occasion. The ball was squared to Lyndon Dykes but he could only smash the ball over the bar.

With six minutes left Safranko missed another chance, with a wonderful cross from out wide that the striker headed just over the bar from point blank range. On another day, he could have had three or four goals, but this was not one of his better afternoons. United had a lot of the ball in the last few minutes and forced a series of corner kicks, but the Queen of the South defence largely had them at arm’s length and they managed to see the game out for a vital 2-1 win. The result put a huge dent in United’s title winning ambitions, and with Ross County losing at Alloa a huge opportunity to go top of the league had been spurned. This was not the end of United’s title challenge, but it did mean a win away to Ross County in their next game was a necessity for the league title to remain a possibility. 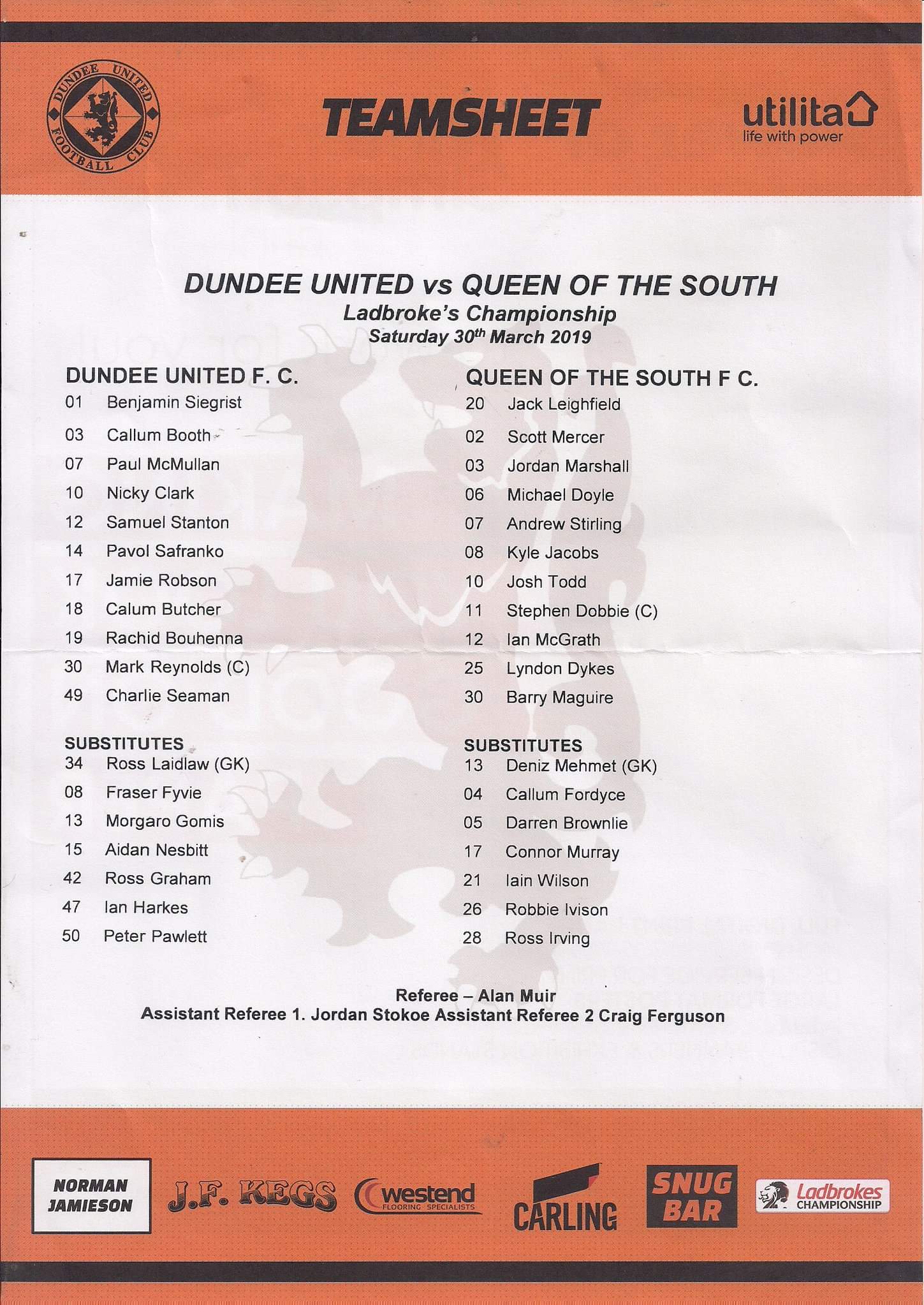