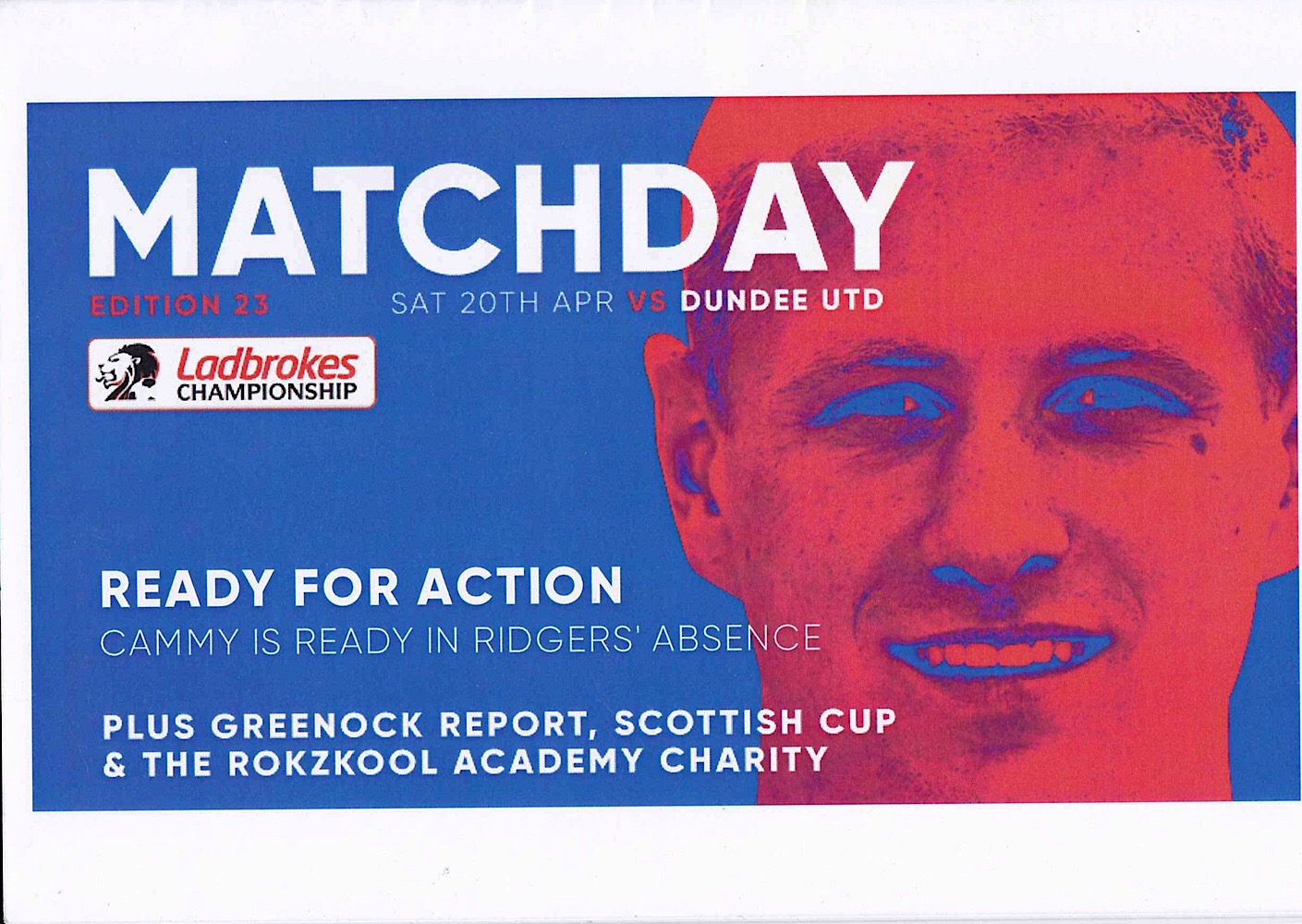 United sealed a second place finish in the Scottish Championship with a 2-0 away win against Inverness Caledonian Thistle. With Ross County having won the previous night against Ayr United, the win also ensured United still had a theoretical chance of winning the league, being six points behind with two games left, although it would require a highly improbable swing in goal difference to keep the trophy away from Dingwall.

Head coach Robbie Neilson made two changes from the team which started the 2-1 win over Ayr United in Dundee United’s last game, with Pavol Safranko and Nicky Clark, who had done so much to alter the course of that game, returning to the starting line up. Callum Booth was dropped to the bench and Osman Sow disappeared from the match day squad altogether.

It was a slow start, and it was seven minutes before the first half chance, and it came after a foul out wide on Peter Pawlett. The same player played the set piece into the box, where the ball was half cleared to Paul McMullan on the edge of the box, although his shot was charged down and a corner kick was the result. Mark Connolly had an effort blocked during a goalmouth scramble from that corner kick. Ben Siegrist was called into action for the first time a couple of minutes later to save an overhead kick from Tom Walsh, before United broke upfield and Pavol Safranko forced a save from Inverness goalkeeper Cammy Mackay with a low shot from 20 yards out.

Midway through the first half, Siegrist was again called upon to save from a Tom Walsh effort, although this time it was a much harder save after the Inverness midfielder drove the ball in from 30 yards, from which the United keeper acrobatically tipped the ball over the bar.

United took the lead in the 27th minute and it was a fabulous goal. Ben Siegrist launched a free kick up the park. Pavol Safranko headed the ball on to Nicky Clark, who also headed the ball on, this time to Peter Pawlett. The winger backheeled the ball back into the path of Safranko, who volleyed the ball past Cammy Mackay in the Inverness goal from 18 yards out. It was a stunning finish to a stunning move. The home side almost equalised within a minute after Jamie Robson was booked for a foul out wide on Shaun Rooney after being dispossessed by the Inverness right back. The ball was swung into the penalty box and was met by the head of Jamie McCart, but his header drifted just wide of the post. A minute later, United came close themselves when an Ian Harkes corner was headed onto the crossbar by Paul Watson.

With ten minutes to go until the break, Ben Siegrist was again forced into action when Joe Chalmers, who had scored a stunning goal in the recent Scottish Cup game between the teams, hit an angled drive from the right hand side which the United goalkeeper did well to block at his near post.

Soon afterwards, United came close to doubling their lead when Ian Harkes sent a corner kick in from the right which was met by the head of Paul Watson. The defender’s header smacked off the crossbar before being cleared from the goal line by the home defence. With five minutes left before the break, Mark Connolly did well to block a Jordan White shot as Inverness sought an equaliser before half time.

United brought on Callum Booth for Peter Pawlett at half time, and the left back almost had an immediate impact when he sent in a cross which was flicked on by Pavol Safranko, but the ball landed on the roof of the net. United them forced a corner which Ian Harkes sent into the box, but the Inverness defence were able to clear the ball. Four minutes after half time, Dundee United doubled their lead. Paul McMullan met a long ball on the edge of the penalty area, and despite cries of handball from the Inverness players he broke into the box, cut inside his marker and dinked the ball over Inverness goalkeeper Cammy Mackay to give United a two goal lead.

The home side almost managed to get a goal back within a minute through Aaron Doran, the man who had won the recent cup game between the teams for Inverness. Doran was played through on goal and was able to round Ben Siegrist, but his shot was blocked on the line.

The chances continued at both ends, with Pavol Safranko being mere inches away from getting his head on the end of a Nicky Clark cross when any touch would almost certainly have made the game 3-0. Liam Polworth threatened for Inverness a couple of minutes later but his effort from distance flew over the bar. Mark Connolly was the next to threaten after the ball fell to him after a United corner but he could only poke his shot wide of the post, before Jamie Robson fired in a fierce drive from the corner of the Inverness penalty area which was beaten away for a corner by Cammy Mackay. The same player looked certain to score in the 74th minute when a cross from United substitute Aidan Nesbitt found him free at the far post. He controlled the ball and fired it past Mackay in the Inverness goal, but Shaun Rooney was able to get back and clear the ball off the goal line. This came a minute after Inverness were almost handed a route back into the game when Mark Connolly inadvertently played Inverness substitute Nathan Austin through on goal, but Mark Reynolds was able to do enough to hold up the striker. Austin could not get a clean shot on goal and his effort was easily saved by Ben Siegrist.

Inverness were still battling hard to find a way back into the game as it drew towards its end, but the United defence were holding firm. With ten minutes left, the home side wasted a golden opportunity to pull a goal back through substitute Anthony McDonald as he embarked on a great run into the United penalty area, but his good work in getting himself into a shooting position was undone when he could only hit his shot wide of Ben Siegrist’s left hand post.

The game ended in an ignominious fashion for Inverness when Brad McKay was sent off for two bookings in quick succession. After finding himself booked for simulation, his reaction towards the referee in the wake of that decision saw him receive a second booking. They almost grabbed a consolation goal before the end through Jordan White. The big striker turned and shot from inside the area but Ben Siegrist saved well. From the resultant corner, Nathan Austin had a header on target but Siegrist pulled off another excellent save to keep United’s clean sheet intact and ensured United’s first league win by more than one goal since November.

The win ensured that Ross County would have to wait another week to clinch the Championship title, although United’s chances of winning the league were strictly mathematical. The three points also secures a second place finish for United, and despite their defeat results elsewhere ensured that Inverness secured a playoff spot, meaning that this may not be the final meeting of the two clubs this season. 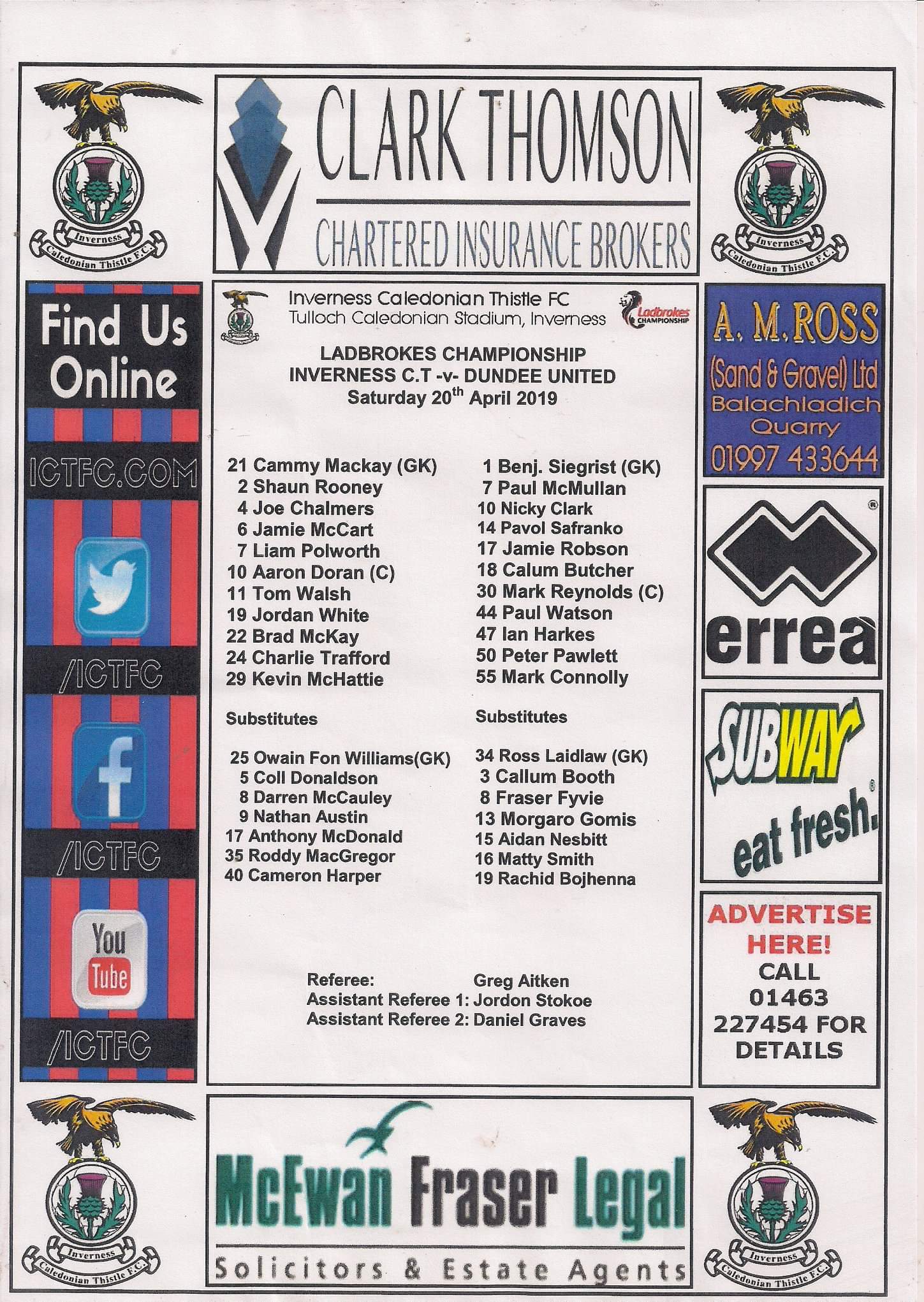