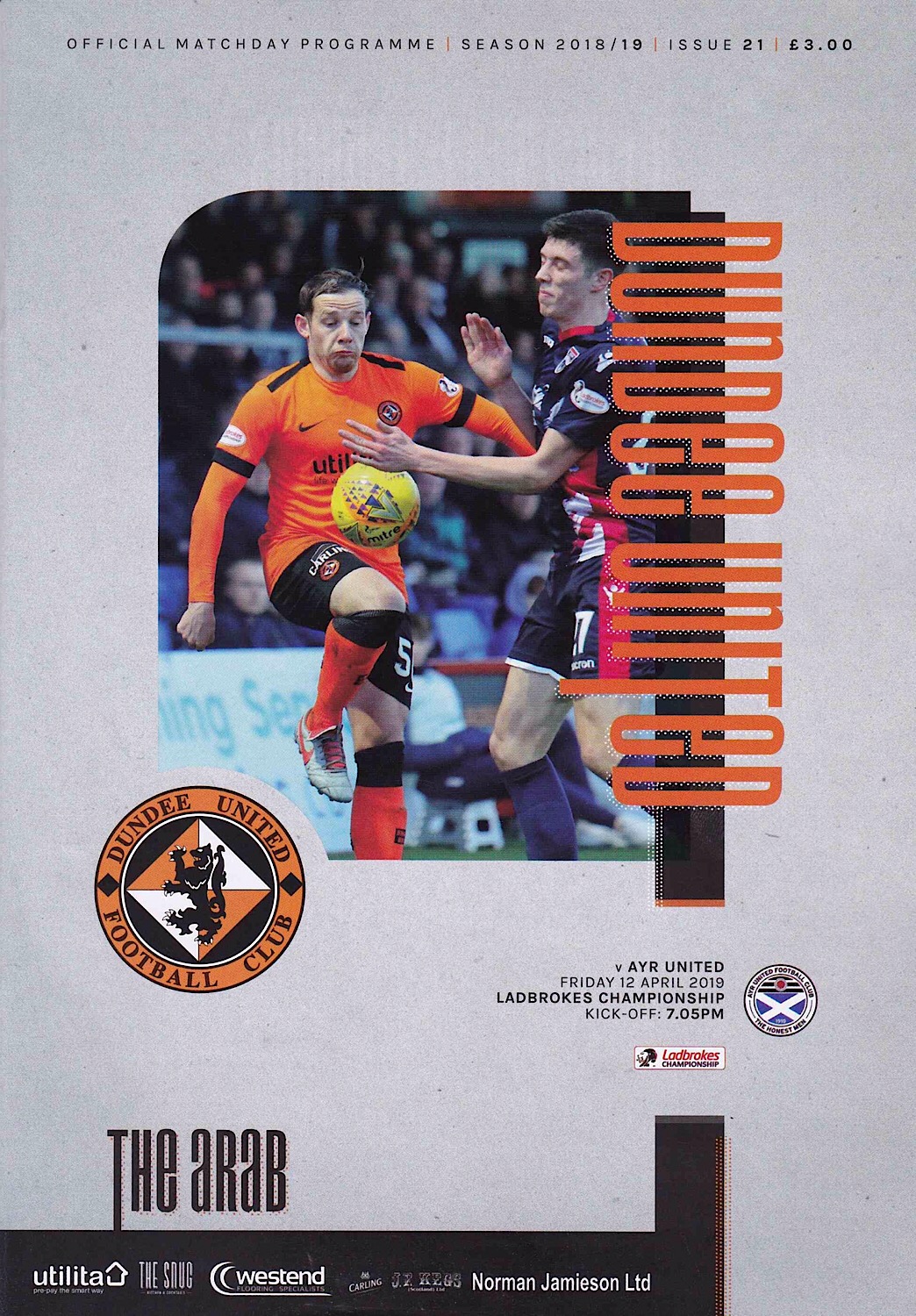 United faced Ayr United at Tannadice in what was their second consecutive Friday night game. With Ross County’s win over Dunfermline in midweek, the Terrors were a full eight points off the top of the Championship with a mere four games left, so their title bid was realistically almost over. They began this game six points ahead of their opponents, although Ayr did have a game in hand, so a win for Dundee United would almost certainly seal second place and an easier potential route in the end of season playoffs.

However, given Dundee United had failed to score in the previous three matches between the sides, the only three league games to date in which they had failed to hit the net, they knew it would be a tough game. It had also been almost two years since Dundee United last won a game live on television, a winless run which stretched to thirteen games.

Robbie Neilson made only two changes from the side which had drawn with Ross County in their previous game. Fit-again Osman Sow came into the side at the expense of Pavol Safranko, who despite his goal in the previous match was relegated to the bench. The other Dundee United change saw Nicky Clark replaced by Callum Booth.

Ayr United kicked off on a sunny but cold evening in Dundee. The first chance came for the home side after a couple of minutes when Daniel Harvie fouled Peter Pawlett on the halfway line, but the resultant free kick was eventually cleared by the Ayr United defence. Paul McMullan was then played through on goal by a lovely pass from Ian Harkes a minute later, but he failed to control the ball and the chance was gone. Both sides then had chances within a frantic few seconds in the fifth minute. Firstly, Declan McDaid played in Lawrence Shankland but the prolific striker failed to control the ball on the penalty spot. Dundee United broke through Paul McMullan who played in Osman Sow, and the striker’s low shot from 25 yards out went just past the post. Sow robbed Steven Bell of the ball a minute later and drove towards the goal line, but his cross was cut out. The ball was played back into the box from the right by Paul Watson, Michael Rose inexplicably let the ball run past him and Bell rugby tackled Sow as the striker attempted to reach the ball, but referee Bobby Madden saw nothing amiss and no penalty was forthcoming.

Peter Pawlett had a promising run down the United right on the twelfth minute but his low cross was cut out. Ayr then hit Dundee United on the break but a breakdown in communication between Lawrence Shankland and Michael Moffat saw an end to that opportunity. The home side had a goal correctly disallowed after 17 minutes when Callum Booth hit a shot across the face of goal from the corner of the penalty area and Osman Sow diverted the ball into the net, but he did so from a clearly offside position. Andy Murdoch was played through on goal a couple of minutes later, but Mark Connolly was able to rob him of the ball before the Ayr midfielder could get a shot away.

Robbie Crawford then became the first player to be booked after fouling Paul McMullan 25 yards from goal as the Dundee United winger broke towards goal. The resultant free kick from Peter Pawlett was on target but straight at Ayr United goalkeeper Ross Doohan, who made a comfortable save. Osman Sow was then booked for a foul on Liam Smith, who had been announced as a Dundee United player for next season in the run up to the game. From the free kick, the away side took the lead. The ball was launched into the Dundee United box and was only half cleared. Robbie Crawford played the ball into the back post where Steven Bell cushioned a header towards goal which floated into the net at the back post.

The home side’s almost immediate response came through Osman Sow as he controlled a long ball on his chest in the Ayr United penalty area, but Michael Rose was able to get in a last ditch challenge before the Swedish striker could get a shot away. A couple of minutes later, a Mark Connolly effort from 30 yards out seemed ambitious to say the least, and so it proved as the ball sailed miles over the bar.

Ayr United were nearly gifted a second goal just after the half hour when Lawrence Shankland robbed Ian Harkes of possession in midfield. Shankland broke towards goal, but kept going rather than passing to Robbie Crawford who had made an overlapping run, and Harkes was able to redeem himself by robbing the ball from the Ayr United striker as he tried to get himself into a better shooting position. The next chance for the home side came after 35 minutes through an Osman Sow glancing header from a Peter Pawlett cross, but he did not get quite enough on his header and the ball went wide of the post. With a couple of minutes left in the half, another good Ayr United break led to another chance as Andy Murdoch broke forward. His attempted shot was blocked by Mark Connolly but the ball broke to Andy Geggan on the edge of the area. His first time shot was straight at Ben Siegrist. In the final minute of the half, Paul McMullan picked the ball up in midfield and drove towards goal before unleashing a shot from 20 yards out which went just past the post.

Dundee United kicked off the second half, with the visitors making an injury-enforced change at the break as Mark Kerr came on for the stricken Andy Geggan. The home side forced a corner kick on the first minute after some good play from Osman Sow, but the set piece came to nothing. Ayr United had a chance of their own through Declan McDaid, with the winger’s cross being unconvincingly palmed away by Ben Siegrist, and Dundee United were rather fortunate that the ball did not land at the feet of any Ayr United player. Mark Connolly was eventually able to clear the ball.

Dundee United had another set piece chance eight minutes into the second half when another Paul McMullan run was rather crudely ended by a foul from Daniel Harvie, for which the Ayr United player became the third player to be booked. Osman Sow rather disappointingly drove the free kick past the far post. There was a scare for Dundee United soon afterwards when a long ball and Lawrence Shankland broke through on goal. Luckily for the home side, he took a heavy touch and the ball broke beyond the Ayr striker. Ben Siegrist almost let the ball slither from his grasp as it came through to him, but he managed to gather the ball at the second attempt. There was a double change for the home side immediately afterwards as Nicky Clark and Pavol Safranko came on for Osman Sow and Callum Booth. Clark almost made an immediate impact as he found the ball at his feet around the penalty spot, but his stabbed effort towards goal went just wide.

Out of almost nothing, the home side grabbed an equaliser in the 61st minute. Ian Harkes played the ball into the box after a corner kick was only half cleared. The ball was flicked on by Mark Reynolds to Pavol Safranko, who controlled the ball on his chest before launching a ferocious shot past Ross Doohan and into the top corner of the net for what was Dundee United’s first goal against Ayr United of the season. Within a minute of the equaliser, Paul McMullan forced another booking when Liam Smith became the third Ayr United player to be booked for a foul on the United winger, although again the free kick came to nothing.

For the first time in the game, the home side were in the ascendancy with the direct running of Paul McMullan causing problems for Ayr United. McMullan grabbed a second goal for Dundee United with seventeen minutes left, although it came from an error by Ayr United goalkeeper Ross Doohan. After taking a backpass from Daniel Harvie, under pressure from Pavol Safranko he could only play the ball to Paul McMullan around 25 yards from goal and out wide. The winger drove towards goal and hit a shot across Doohan and into the net to give Dundee United the lead.

With ten minutes left, a Dundee United break saw Peter Pawlett make a 50 yard run towards goal before playing in Pavol Safranko. The Slovakian striker shot from around 15 yards out on the angle. A deflection took all the power out of Safranko’s effort and Ross Doohan was able to save the ball his near post. As the game drew towards its end Ayr United threatened with a few crosses but the home defence were able to deal with them and they held on for a vital win.

The win meant that Dundee United went nine points ahead of their opponents with Ayr only having four league games remaining, going a long way to ensure that the Terrors would claim second place in the league, meaning two fewer games in the playoffs at the end of the season. The win also kept Dundee United’s remote chances of winning the league alive, leaving them six points behind Ross County after the weekend’s matches with three games left to play. 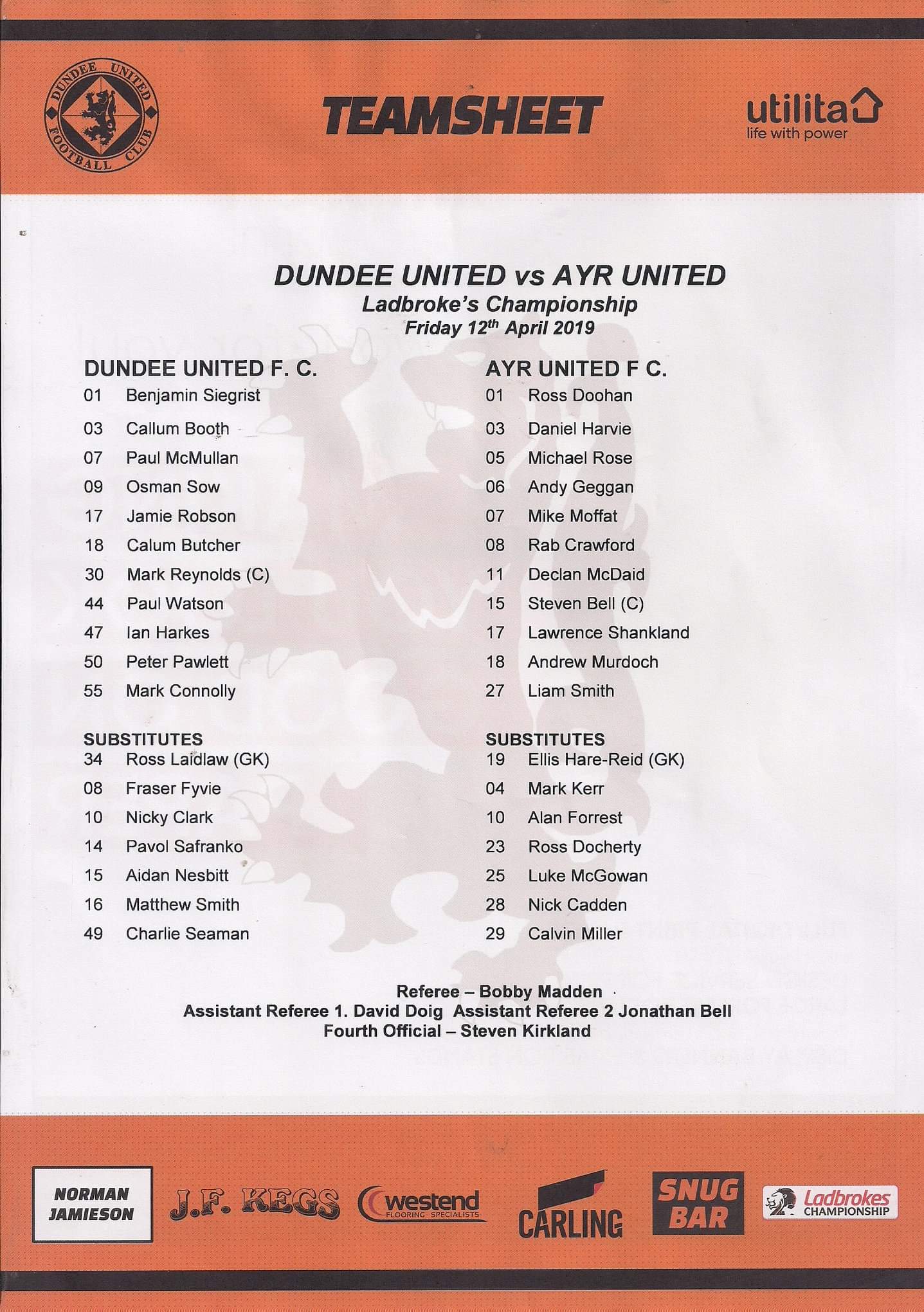 Tonight we welcome Ayr United for another very important fixture in our quest for promotion. We go into the game disappointed not to have taken more from our last two games against Queen of the South and Ross County. I thought we did enough to win both those games. Losing to Queen of the South was particularly disappointing as we created so many chances but our failure to convert them proved our undoing. Up at Ross County last week, again we played extremely well. Scored a good goal and had two or three other very good chances to put the game to bed early. And having just a one-goal advantage, entering the last ten minutes. County went gung-ho and got a break to snatch a late equaliser. The last few weeks has all been about winning every game and that is no different tonight as we face Ayr United. If results recently have been disappointing, the good thing is that the performances have been there. It is just sometimes we have not carried the luck we would have liked to get us over the line in these games, but in football that is how sometimes these things pan out and all you can do is move on to the next one.

After losing all three previous games to Ayr United, it is important that we lay down a marker tonight, especially as they are potential play-off opponents. On their last visit here, they caused us a lot of problems, so we know just how tough a task faces us this evening, but we want to go and win the game and build up momentum for the remaining fixtures. Once again, I can only praise you the fans for your efforts. The support was good against Queen of the South, but phenomenal at Dingwall last week through the whole 90 plus minutes. You'll have been as gutted as us at the outcome but will acknowledge that the performance was very good and showed that we are a team capable of playing in these big games such as tonight's.