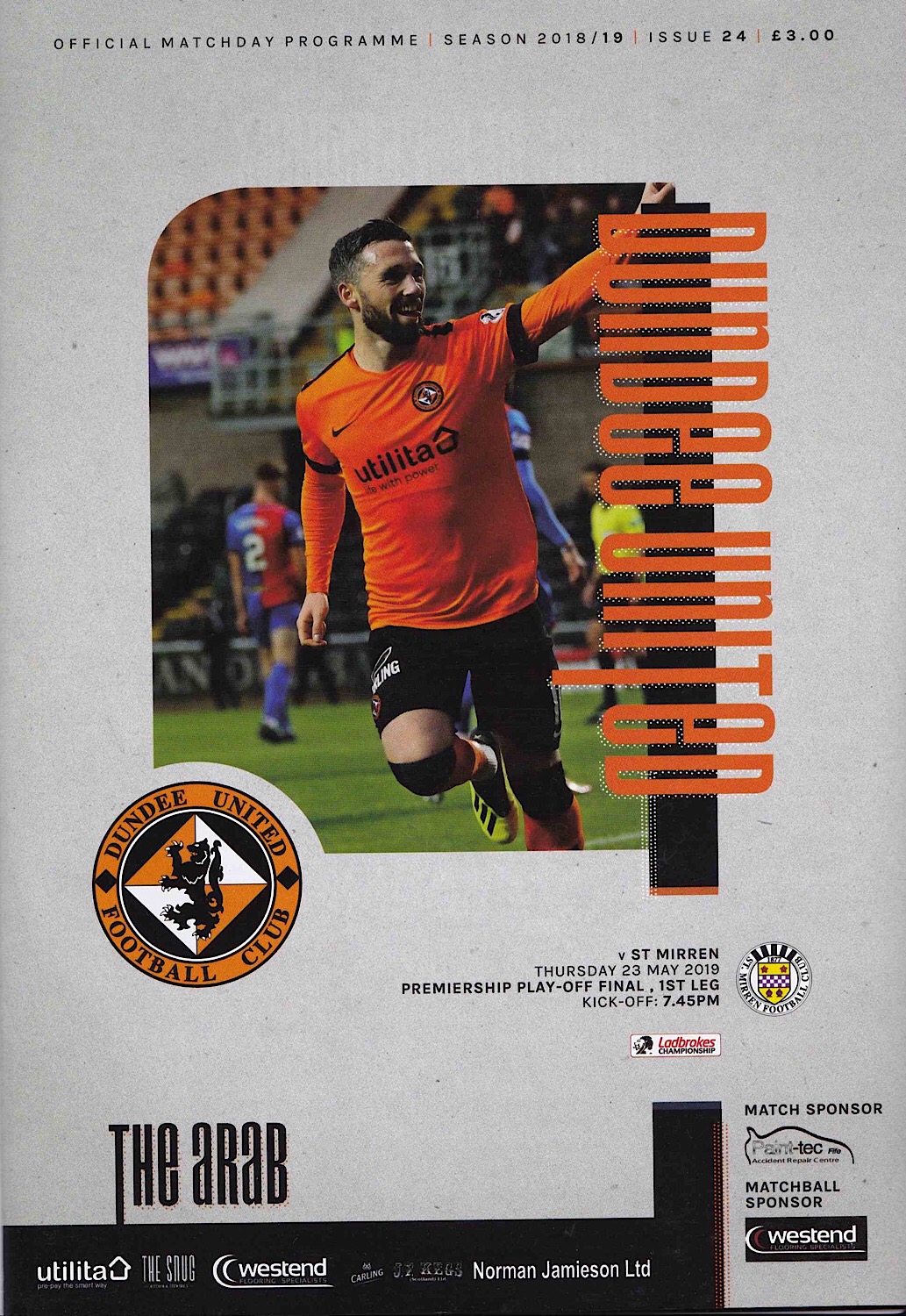 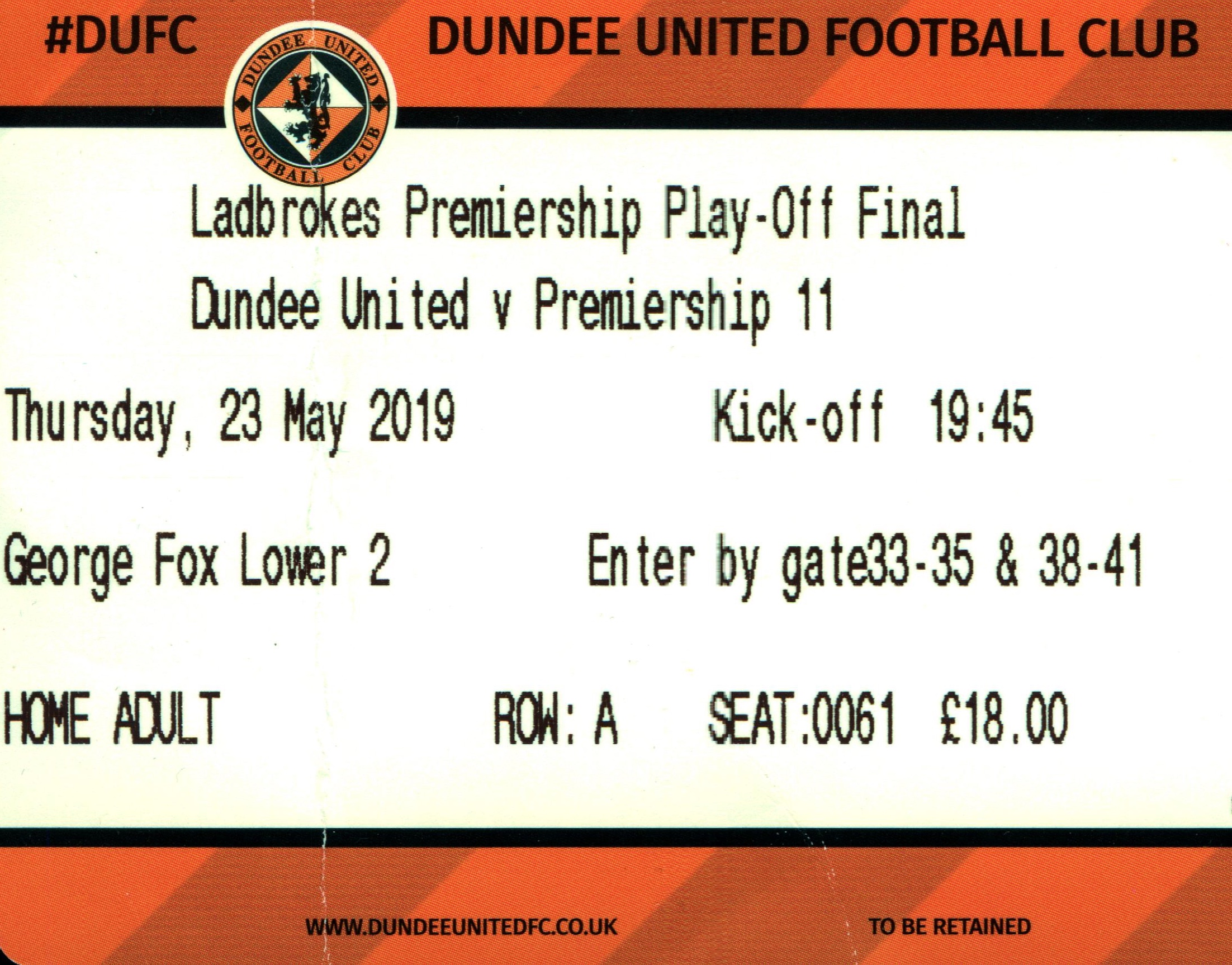 The first leg of the Premiership playoff final between Dundee United and St Mirren ended goalless in a tense and nervy evening at Tannadice. The home side arguably had the better of the game, but chances were at a premium for both sides. The game took place in from of United’s biggest home crowd for over four years of 11,062.

Both sides went into the tie in good form, with United having won five of their last six matches, with their only defeat coming in a game against Morton in which United had largely fielded a shadow team. St Mirren, unusually for a team finishing in 11th place in the Premiership, were also in good form with an unbeaten run stretching back six games, the most recent of which was a 3-2 victory against Dundee across the road at Dens Park.

The two sides had met before this season, with Dundee United having prevailed 2-1 in a Scottish Cup fifth round meeting in Paisley in February. United fielded seven of the players that started that day, with a starting eleven which was unchanged from the side who had beaten Inverness Caledonian Thistle 3-0 in their previous game. Top scorer Pavol Safranko was again only fit enough for a place on the bench after recently suffering with illness.

As the home side, United took the initiative from kick off, and had their first chance after five minutes, which began with a hard tackle in midfield from Rachid Bouhenna on St Mirren captain Stephen McGinn. The ball was played through to Paul McMullan on the edge of the St Mirren penalty area, before playing a one-two with Osman Sow. McMullan slid the ball through to Ian Harkes, but the American’s low shot was deflected wide. At the other end a minute later, Paul McGinn went down inside the United box, but his appeals for a penalty were rather half hearted and were correctly waved away by referee Bobby Madden.

After a foul by Nicky Clark on Stephen McGinn led to a St Mirren free kick, the away side almost took the lead through the unlikely figure of Mark Reynolds, as the free kick was nodded towards goal by the United centre half. Luckily, the header was straight at United goalkeeper Ben Siegrist, so Reynolds was spared any embarrassment.

A minute later, the first booking of the game arrives as Ian Harkes headed the ball in midfield, just beating Ryan Flynn to the ball. In doing so, the St Mirren midfielder kicked the American full in the face. It was clumsy rather than malicious, and echoed the Liam Polworth challenge on Mark Connolly in the previous round. However, Bobby Madden chose to be more lenient than the referee that day was, and brandished the yellow card towards Flynn with United players and supporters appealing for a red. After treatment, Harkes was able to continue, albeit with his head heavily bandaged.

The best chance of the half, and of the game as it turned out, came in the 21st minute when a through ball from Nicky Clark played Paul McMullan through on goal, albeit on the halfway line. He easily outpaced Mihai Popescu and bore down on goal, but his shot from around 15 yards out on the angle was well saved by the legs of St Mirren goalkeeper Vaclav Hladky, who had also pulled off some great saves when the teams last met in February. McMullan and Harkes then both had shots blocked in a goalmouth scramble inside the St Mirren box as United sought to grab the lead, but the St Mirren defence held out.

With ten minutes to go until half time, Paul McMullan did brilliantly on the right to get himself into a crossing position, before rolling the ball across the six yard box. However, the ball just evaded the onrushing Nicky Clark and the chance was gone. A few minutes later, there were chances at both ends in quick succession as an Osman Sow cross just evaded Nicky Clark and Paul McMullan at one end before St Mirren broke away and Kyle McAllister curled a lovely shot from the edge of the area that Ben Siegrist acrobatically turned past the post. There was a final chance in first half stoppage time after Nicky Clark was fouled 30 yards from goal, but Rachid Bouhenna’s effort was saved by Vaclav Hladky and the referee immediately blew for half time.

St Mirren almost grabbed the lead a minute into the second half, and would have done if not for more great goalkeeping from Ben Siegrist. A deep cross from the right was headed across goal by Lee Hodson and Kyle Magennis cleverly flicked the ball towards goal, only for Siegrist to instinctively stick out a hand to block the ball from point blank range. United responded a few minutes later when Nicky Clark fired a low ball across goal, and although Peter Pawlett almost got to the ball there were no takers. Paul McMullan also smashed a ball across goal a minute later, but again the cross evaded the United players. Robbie Neilson made a change at this stage, with Pavol Safranko coming on for Osman Sow, and the Slovakian nearly scored with his first touch as he met a deep cross with a header, but the ball was deflected wide for a corner kick. From that corner Safranko again met the ball but his header across goal was cleared. The ball broke to the United right and Mark Connolly looked to have been tugged back by Lee Hodson as he chased the ball but again Bobby Madden was unmoved by the penalty claims. He was eventually fouled by Hodson, and United had a free kick right at the corner flag from which they nearly took the lead. Paul McMullan played the ball in and St Mirren keeper Vaclav Hladky flapped at the ball. Mark Connolly headed the ball across goal towards Peter Pawlett, but Ryan Flynn was able to acrobatically clear the ball off the line just before the United winger could prod the ball home.

As the half drew on, the game got more cagey and the atmosphere got more tense, with the away side evidently being very happy with the 0-0 scoreline and were content to hold what they had. Both sides struggled to get any flow going as the game headed towards its conclusion, with players possibly being aware of the enormity of the occasion and the implications of any mistakes. United tried to force the issue with a couple of changes, with Sam Stanton coming of for Nicky Clark, followed by an injury enforced change as Callum Booth came on for the hobbling Peter Pawlett. However, the changes did not have the desired effect and the game drifted towards its conclusion with the away side taking every opportunity to take the sting out of the game.

However, United almost snatched a winner in the final minute when a superb cross from the left from Jamie Robson unsettled the previously untroubled St Mirren defence. The cross was parried by Vaclav Hladky, and only a superb block from Gary McKenzie prevented Pavol Safranko from reaching the ball and turning it home. Callum Booth then swung over a cross from the left in stoppage time that Sam Stanton just failed to reach. The danger was cleared, and the game finished goalless.

Coincidentally, this was United’s first 0-0 draw in a home game since the game against Hamilton Academical at the same stage two years ago, as well as being their first goalless draw of the season in any competition. This game was every bit as tight as that Hamilton game was, and left the tie very much in the balance with the second leg in Paisley to come.