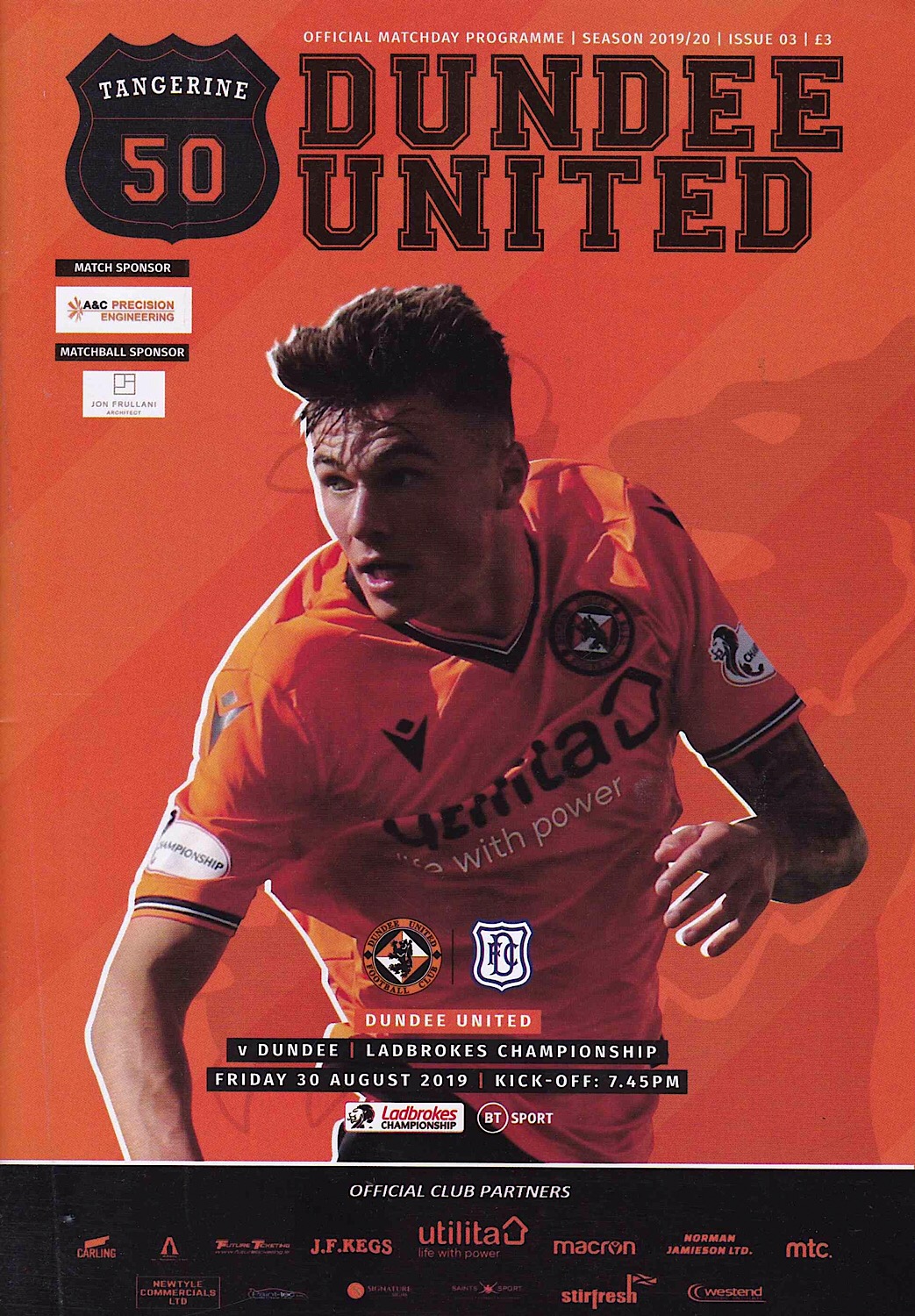 Robbie Neilson made one change from the side that convincingly defeated Dunfermline last week, with fit again Mark Connolly back in for Ian Harkes, while Calum Butcher initially stepped forward into his usual midfield role.

The game exploded into life after eight minutes with a moment of controversy as Dundee looked to have taken the lead, only for the goal to be disallowed with Johnson adjudged to have been offside. In an edgy few minutes for United, a fierce Johnson shot was well saved by Siegrist then Ness fizzed in an effort just over. United composed themselves quickly though and sent Tannadice wild with the opener. From the home side’s third corner, Peter Pawlett swung in a cross which Connolly headed on and Calum Butcher scored with a wonderful looping header which beat the keeper and defenders on the goal line. With 27 minutes gone, Dundee levelled when Kane Hemmings forced the ball home after a goalmouth scramble which United just couldn’t clear following a Ness free kick. United then suffered a blow as Connolly limped off to be replaced by Harkes, with Butcher moving back to the centre of defence. It was breathless stuff and McMullan was next to test Hamilton but his shot from outside the box was comfortably held. With 12 minutes until half time, United then had an incredible spell where they scored three times in quick succession to send the home crowd wild. First a Pawlett cross was nodded down by Shankland and fell at the feet of Louis Appéré who chested the ball down, composed himself and struck an incredible effort in off the underside of the bar. Just a few minutes later, United extended the lead. McMullan caused more mayhem with his direct running and he was practically rugby tackled on the edge of the box, with the referee having no hesitation pointing to the spot. Lawrence Shankland stepped up and slotted home down the middle for his eighth goal in just four league matches. Dundee were well and truly on the ropes and Pawlett fired wide. Incredibly, United hit a fourth with five minutes to go until half time with a wonderful low Calum Butcher header from a Pawlett assist. It was a remarkable first half where United were thoroughly clinical to open up a big lead in a huge match.

And within 60 seconds of the restart, along came goal number five. Ian Harkes found himself in space a long, long way out and battered in an effort that deflected off Forster and into the net. Finally, the game settled down from the frantic pace since the first kick-off as United knocked the ball around and the home support happily worked their way through the repertoire of songs. Midway through the game, Dundee started to find themselves on top, causing United problems, especially since midfielder Paul McGowan’s arrival from the subs bench. In the 68th minute, they scored their second goal when McGowan lofted in a cute ball to the back post for Andrew Nelson to coolly slot home. Suddenly in a slightly changed game, Dundee were dominating possession and the home side were on the rack. Reynolds had to be alert to divert away another effort, and Siegrist held well from a couple of half chances. McMullan showed some great trickery on the right then set up substitute Cammy Smith, but his goal-bound low shot was cleared off the line by Kerr. He wasn’t to be denied adding the sixth for long. With seven minutes left, some wonderful work from Appéré set up Cammy Smith who dragged the ball back on his right foot and slotted home with his left to round off a remarkable night. With the crowd chanting “we want seven” it nearly came when the post denied Butcher his hat-trick with a header and though Cammy Smith crashed the rebound, he was clearly offside. It wasn’t to matter though, the United fans in the packed three home stands were going away more than happy. United celebrated the return of the famous Dundee derby with an utterly exhilarating performance at an electric Tannadice that was packed to the rafters. More than 14,000 fans watched one of the great performances of recent years by the Tangerines as they outfought and outclassed their city rivals with a five star display. It rounded off a remarkable August, which has seen United win all four league matches, notching 14 goals in the process. 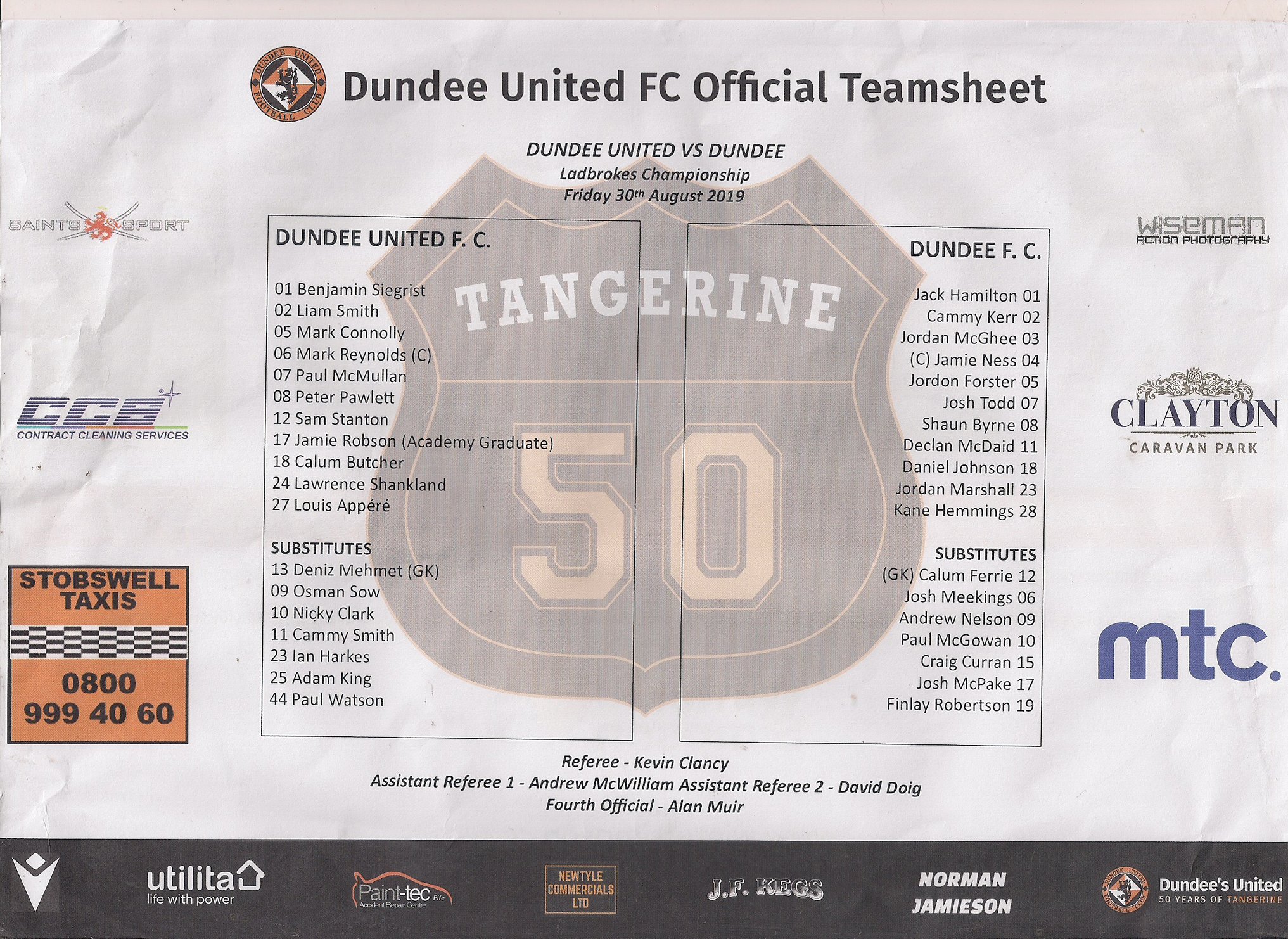 The fixture list has handed us a very difficult start to the campaign and with three wins under our belt I am delighted, as I am sure you all are, with how things have worked out. In our opening game against Inverness Caley Thistle, to a man, we played at a high level which brought us an important victory against one of the teams I expect to be promotion rivals. We looked fit and strong and, of course, Lawrence Shankland with his four-goal haul showed exactly why we brought him to the Club. But he requires the ammunition, and getting the ball into the right areas is something that we had been working on and when you play with two up top, you have to feed them and, to be fair, we did that. The Partick game proved another test for us which we came through with a win. We actually started the game pretty well but conceded a goal and had to fight back from that. Last Saturday we made it three wins out of three at Dunfermline, which is always a difficult place to go to at the best of times. I thought the lads performed pretty well to deservedly post another three points on the board. In going two up we looked pretty comfortable. True, they had a wee bit of pressure towards the end but, throughout the whole game, I always felt we could go and score another one.

However, good as it is to be sitting with a 100% record, we are only three games into the season and tonight we face a massive game as we welcome Dundee. We know just how important it is and it doesn't matter what you have done in the previous matches, because how you perform in this game is all-important Though I never experienced a Dundee derby as a player, I have played in and managed a few on both sides of the border, so I know just how intense these occasions are. With a lot of the players staying locally, they fully understand what it means to everyone in the city. It doesn't matter where you are in the league, winning the derby is the most important thing for the fans. I make no apologies for again thanking you, our fans, for your tremendous backing. Last week, over 2,500 of you travelled to East End Park which is absolutely phenomenal. I am sure that it will be a long time before there is a bigger away support there, other than the Old Firm. So credit to you and the players who worked hard and put on a good show. Going into tonight's game, you have again been magnificent as we have a full house which gives us that backing which the players need and enjoy. Hopefully we can deliver again by making it four wins out of four.