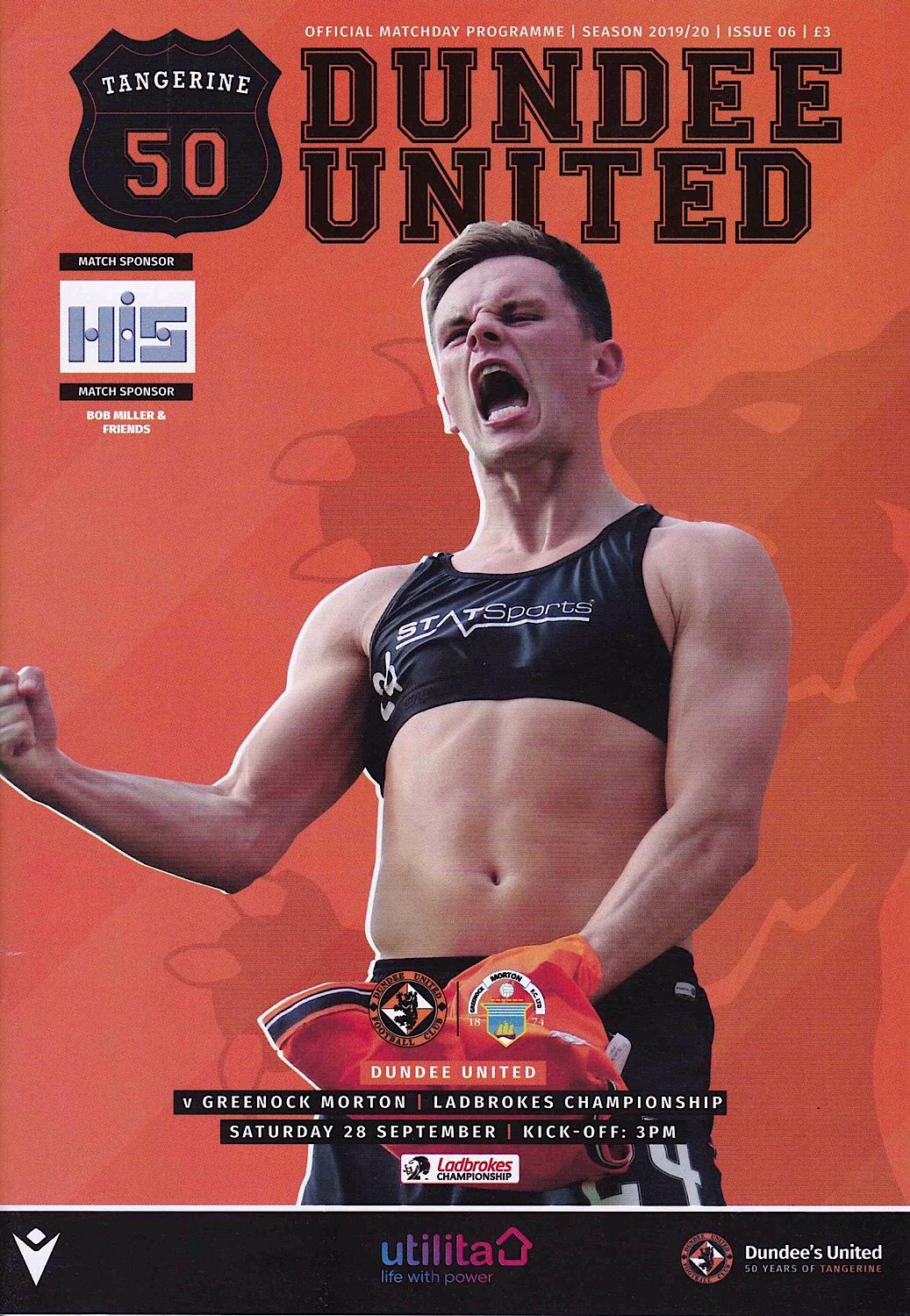 Dundee United went into today’s encounter with Greenock Morton looking to continue their rich vein of form at home. Three straight league victories at Tannadice had seen United sit top of the Scottish Championship on goal difference. mLast week’s 2-1 victory against Arbroath, courtesy of two late goals from goal machine Lawrence Shankland, showed United’s determination to play to the final whistle in an encounter that had looked likely to end in defeat for much of the second half, a valuable three points that could be so vital by the end of the Championship race. Today’s visitors, Greenock Morton, would be looking to make it a Tayside double after their 1-0 win against neighbours Dundee last weekend at Cappielow. Manager David Hopkin, in his first season with the Greenock side, had steered the team to fourth place in the Championship, and would be looking to replicate the kind of form that saw Livingston promoted into the Premiership under his tenure in 2018.

United took an early lead in the 1st minute when a speculative McMullan cross from the right was missed by the Morton defence and it was that man Lawrence Shankland who was on hand to sweep home past the despairing Rogers. United made it 2-0 after only five minutes when Shankland doubled his tally for the day. Neat build-up play by Pawlett and his pass finds the in form striker Lawrence Shankland in space to drill his low first time shot into the net. The ideal start for Robbie Neilson’s side. United continued to press and were unlucky in the 20th minute when a quick taken free-kick by Pawlett saw Shankland through on goal with only the advancing Rogers saving Morton’s blushes. United were playing some lovely football in the first half, with Smith, Pawlett and Spörle all linking up well down the left flank. In the 33rd minute, Harkes was unlucky to see his left foot drive take a deflection and skim past Rogers right hand post. Spörle continued to impress down the left wing and showed plenty of skill as he dribbled past four Morton players, the Argentinian now looking comfortable in that left back position. United made it 3-0 in the 40th minute when Paul McMullan found himself one on one with the goalkeeper. On the right side of the box and around 15 yards out, the winger calmly slotted the ball past Rogers, no less than United deserved for a comprehensive first half.

Morton boss David Hopkin made two changes at the beginning of the second half, replacing Sutton and Millar with Blues and Colville, the away side clearly looking to change the pattern of the first half. In the 52nd minute United had the goal of the season chalked off for offside. Neat play from Shankland set up Pawlett with his back to goal. The midfielder quickly did a bicycle kick into the back off the net but the linesman already had his flag up to spoil the party. United did make it 4-0 in the 56th minute and it was Lawrence Shankland again to complete his hat-trick. Picking the ball up on the left edge of the Morton box the striker danced into position and deftly picked his spot in the Morton net. Shankland’s already impressive record was a goal every 109 minutes, but the forward has actually improved on that total since his arrival at Tannadice. With the game entering the final third, United didn’t let up in their quest for more goals. With Ayr United starting the day level on points with the Tangerines, goal difference was vital. United had an appeal for a penalty waived away in the 66th minute when Shankland appeared to be tripped trying to reach a McMullan cross. Despite the protestations, referee Alan Muir kept his whistle quiet. New signing Troy Brown looked comfortable at the back and dealt with anything thrown at him, particularly in the air. Manager Robbie Neilson will be delighted with the defender’s start at Tannadice. By the 80th minute both sides had made all their substitutions and the game looked to be winding down. Paul McMullan had other ideas though as he flew into the Morton box and after skipping by 2 defenders, shot low past Rogers to make it 5-0 United. In the 84th minute it was substitute Logan Chalmer’s turn to get in on the act. Logan Chalmers found himself unmarked at the back post and had the easiest of headers to grab United’s 6th goal of the game. Referee Alan Muir blew for full-time with United’s 6-0 score line shining brightly on the Jerry Kerr scoreboard. United’s players deserved all six goals, keeping a clean sheet and the standing ovation they received at the end of the game. United stay top, and on today’s performance will be hard to shift. 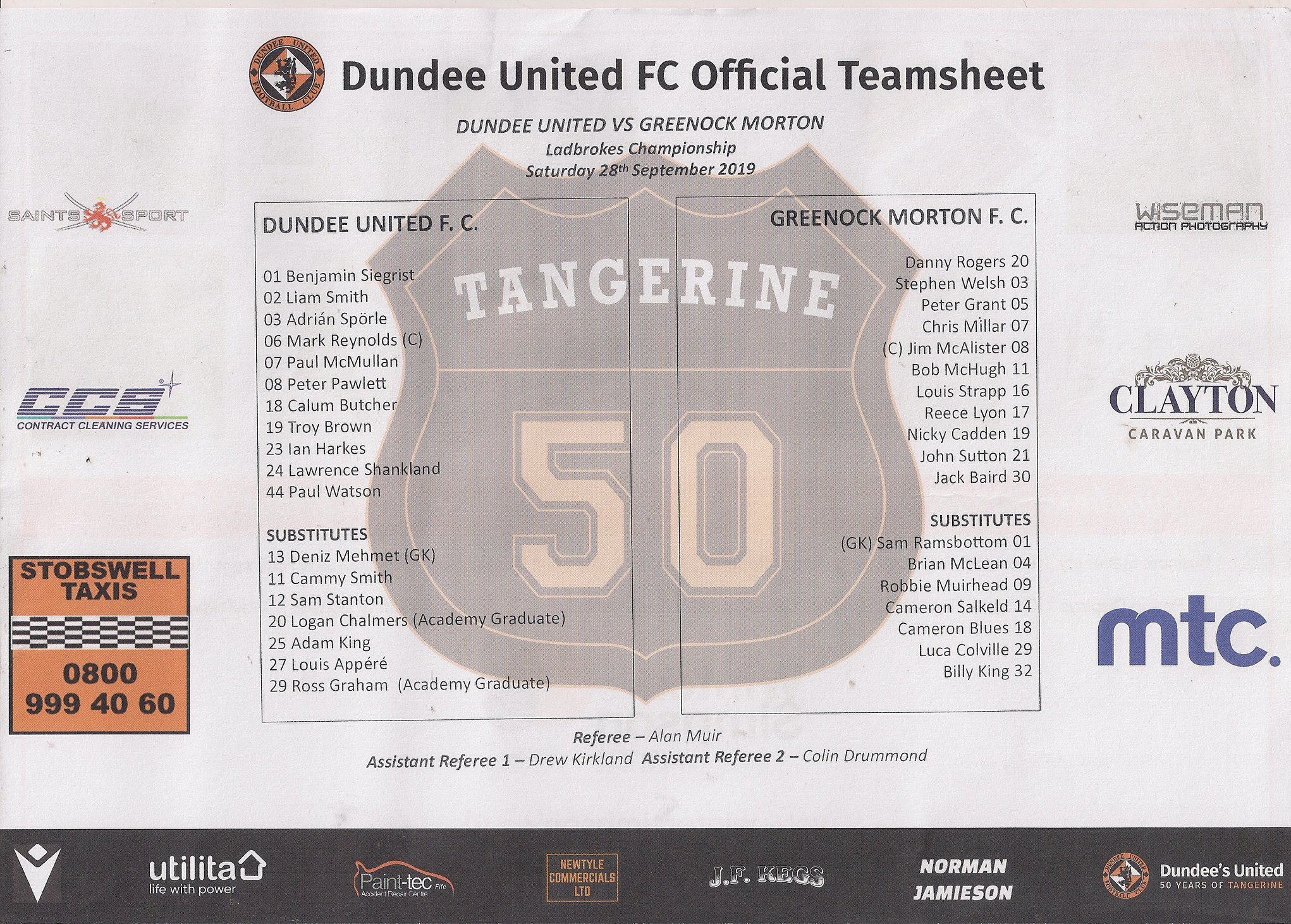 In the end, thanks to two late goals from Lawrence Shankland, we were able to collect three important points from Arbroath's visit. As we know, these kind of games are always going to be tough and everyone - staff, players and fans understand that teams will come to Tannadice and sit in. If they come away with a point, they'll be delighted. So, it is up to us to try and break them down and patience has to be the name of the game. I think that at times the quality was good but it was just that final moment last week that let us down. Ultimately, if we get to the end of the season, sitting in the position in which we hope to be in, nobody will be too bothered as to how we got there. Having been involved in winning league titles in the past, nobody looks back and picks out individual games. Yes, we want to win games convincingly every week,but it is not going to be like that. So the most important thing is that we work hard, as the players did last week, and keep believing, which paid off against Arbroath. And as we welcome Greenock Morton this afternoon, we are only too well aware that we face another tough test. They are side with good physicality with two big lads in central defence and with Peter Grant scoring the goals that defeated Dundee last Saturday. Up front they can call on the experience of John Sutton and possibly Robbie Muirhead whom we know well from his time here.

We'll face a lot of big lads who are physically strong with Davie Hopkin, their manager, having a track record of doing well in this league as he demonstrated by guiding Livingston to promotion in 2018. Therefore, it is going to be another very, very difficult game. Once again, I can only thank the fans for the numbers in which they are turning out with almost eight thousand here last Saturday. They have been absolutely brilliant and we just need to keep that going because it is extremely important when you are trying to win a title that everyone is together. So the backing of the fans is vital because it transmits onto the pitch and, vice versa, we transmit it back to the stands. All of us have the same aim, so there must be a togetherness at the Club. I arrived here just under a year ago and it is night and day compared to how things were. There was an aura of disappointment about the place from the previous couple of years, but we have managed to turn that round. But we have to continue pushing forward and working hard to get through the wee blips that are inevitably going to occur by sticking together to achieve our common goal.