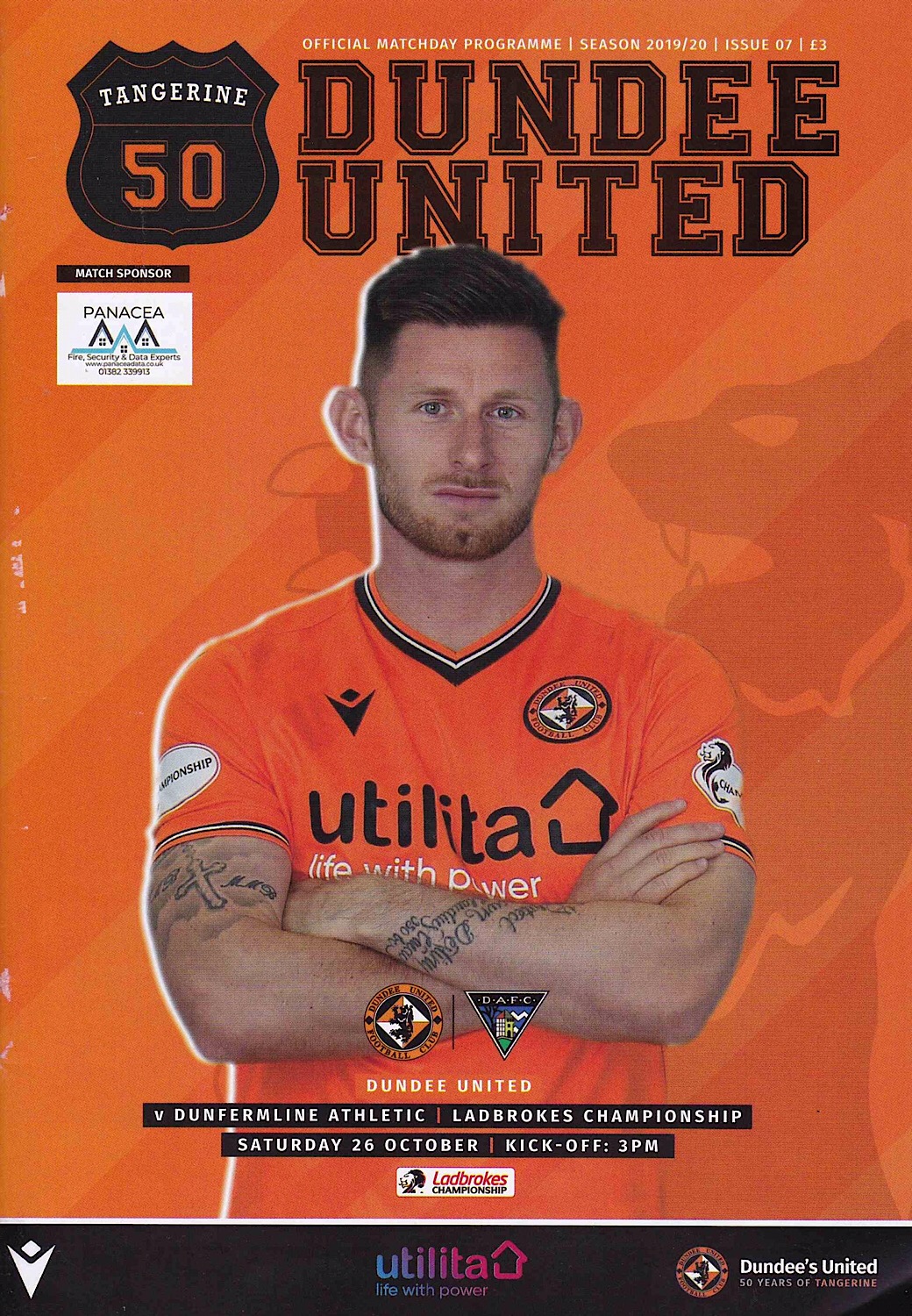 Robbie Neilson made three changes from the side that lost at Dumfries. Jamie Robson, Nicky Clark, Peter Pawlett were all in the starting line up with Watson, Appéré and Stanton all dropping out of the team that lost heavily at Palmerston last time out. Dunfermline’s only change from the team which defeated Ayr United the previous week saw Kevin Nisbet dropping to the bench with Andy Ryan coming in.

After a fairly quiet opening period, United scored with their first foray into the Pars penalty area on nine minutes. An audacious cross field ball by Nicky Clark found Liam Smith, who then fed McMullan whose cross was fumbled by Dunfermline keeper Cameron Gill. Clark retrieved the ball and drilled in a cross which that man Lawrence Shankland fired home. Minutes later Ryan had Benji Siegrist stretching to push a looping header over the bar. On sixteen minutes, Liam Smith was cautioned for a strong, but fair looking challenge on Turner. Impressive play between Pawlett and Robson almost gave the returning full-back a clear view of goal, but Cochrane’s late intervention averted the danger. A defensive error by United let Dow in from the right, his cross found Cochrane by way of Ryan, but the midfielder fired well over. A foul on Ian Harkes just outside the area towards the half-hour mark resulted in United doubling their lead, Nicky Clark's curling free-kick wrong-footing Gill. Robson belied his recent absence through injury in 38 minutes with a fantastic recovery challenge on Dow. From the resultant corner, Ryan's wayward effort found the top tier of the Eddie Thompson Stand much to the amusement of all Arabs. Fantastic play by United involving seven outfield players resulted in a driven cross by Liam Smith which McMullan just couldn’t stretch sufficiently to get a final touch. Shankland, played in by Pawlett, had the final chance of the half, but his effort was deflected to safety by Ashcroft.

An injury to Lewis Martin forced Dunfermline to replace him with Daniel Devine at the start of the second half. And two minutes into it, Calum Butcher tried his luck from 25 yards but his effort sailed just over the bar. Encouraged by this, it took a last ditch interception from Ashcroft to stop the United anchor man running clear through on goal after impressive defensive work from McMullan. Siegrist was smartly off his line to deny Dow a clear shot on goal after a lovely pass through from Harry Cochrane. Nesbit replaced Cochrane just after the hour mark to add greater attacking threat. Pawlett then did well to win possession deep down the left side and his driven cross was met by Clark, but a fantastic effort by Ashcroft saved a certain killer goal for United. The same Dunfermline player then had United fans’ hearts in their mouths as he struck a speculative effort goal ward with Siegrist off his line, but the effort was high and wide. As the game reached the final quarter, Dunfermline were posing the United defence more and more issues and had Nesbit had a little more composure with his effort they could have got back in the game - but his right footed attempt hit the ground and bounced harmlessly over the bar. Appéré replaced Peter Pawlett on sixty-eight minutes as United looked to change the one-way traffic towards the United goal. Andy Ryan cracked a shot off the United bar with fifteen minutes remaining following clever play from Nesbit. King replaced Clark as United looked to take back control of the midfield. On eighty minutes Shankland set up Harkes, but his left-footed effort from 20 yards was well wide of the target. Despite a lot of effort from Dunfermline in the closing stages, they didn’t really have any serious efforts to test Siegrist. 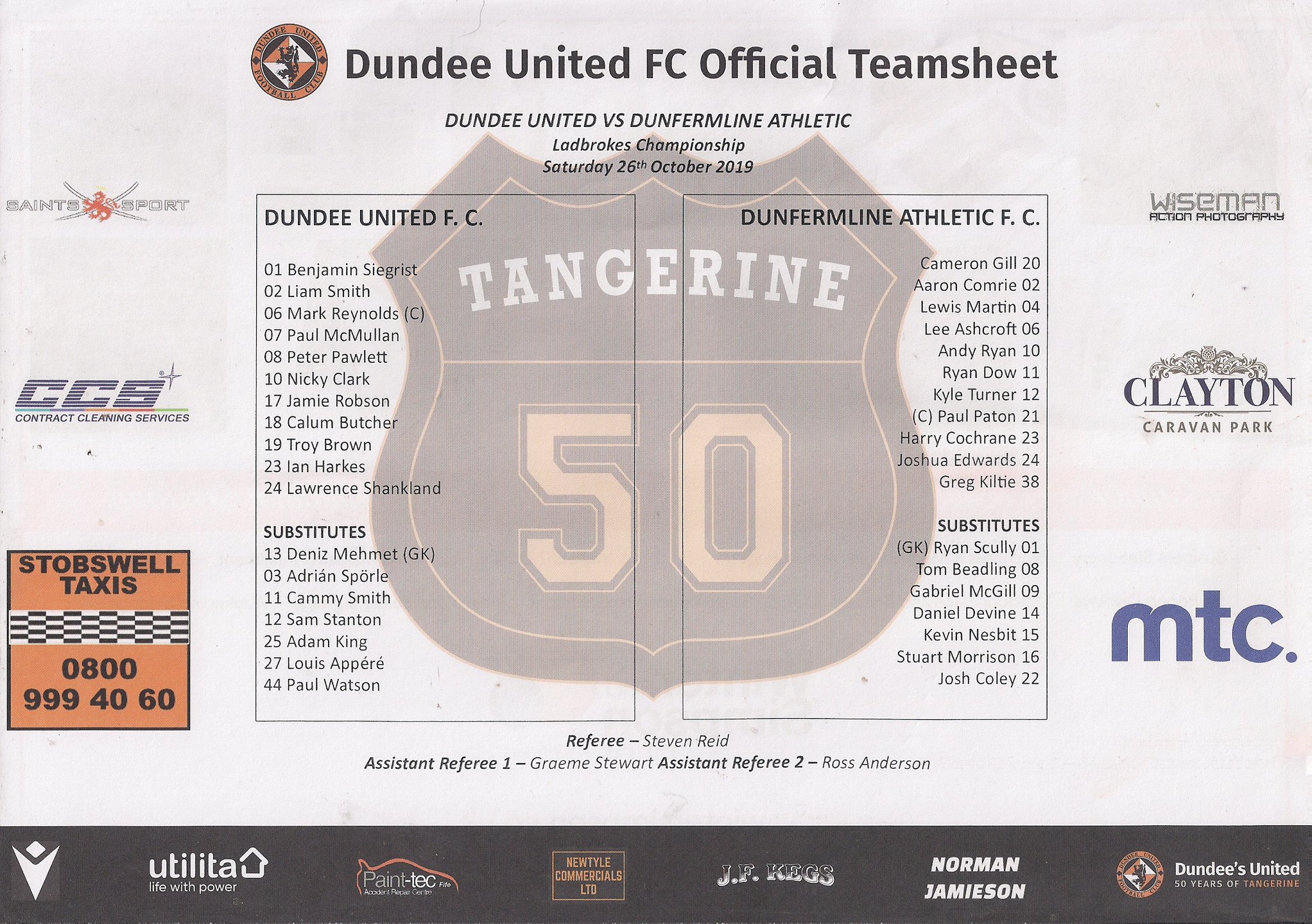 As we welcome Dunfermline Athletic this afternoon, it is the start of a very busy week with Patrick Thistle here on Tuesday followed by a trip to Inverness a week today. Obviously we are all very, very disappointed with the performances and results in the two away games at Alloa and Queen of the South. They were nowhere near the level we want to get to and we must try and ensure that this doesn't happen again. But, as we go into the second quarter of the season, we stilt top the table. Whether you get your points in the ftrst game or the last game, it's all about being league leaders. If we are in this position at the end of the season, the objective of everyone at the Club has been achieved. We have made a really good start to the campaign, but we hit a wee blip towards the end of the first quarter. And now with the first quarter under our belts, we are ready to go again.

We have had quite a number of away games Partick, Dunfermline, Ayr United plus two on Astro Turf at Alloa and Queen of the South - and these are all tough places to go. Now we can look forward two home games and we must seek to take maximum games from these. Our home form has been very good and it is vital that continues, but equally we must ensure that we are picking up points on the road. But there is three quarters of the season left, so there is a long way to go. We must continue to work hard and try to limit any further blips. When we have them again, which we will, we have to make sure that we get over them as quickly as possible. Stevie Crawford and his side come to Tannadice on the back of a great result last week when they defeated a good Ayr side 3-2. They have been doing very well recently and this shows the nature of the league in which, on their day, everyone can beat everyone else. You only have to look at results last week - you wouldn't have predicted any of them! From our perspective, we just have to concentrate on ourselves and get back to winning ways and carry that forward.