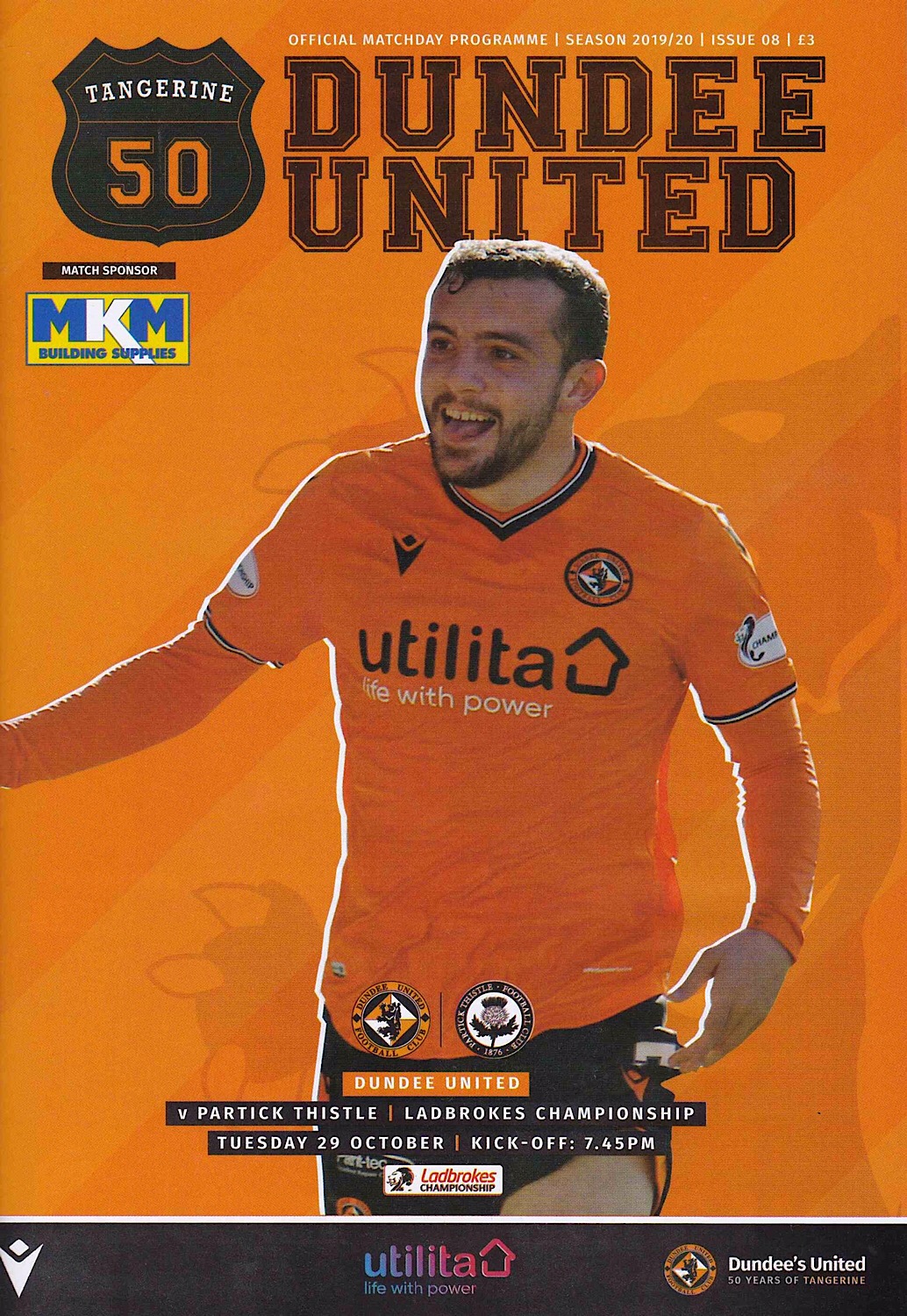 The game started badly for Pawlett who was subbed off in the opening minutes of the game and replaced by Appéré after pulling his ham string. United’s first chance of the game fell on the 10th minute as McMullan played the ball to Appéré who attempted to cross the ball low to Shankland. However, the Jags dealt with this passage of play well and attempted a counter attack which came to no avail. Seven minutes later McMullan was one on one with Partick’s keeper after Bannigan gave the ball away in his own half. McMullan still had some running to do but from the center of the box he aimed his shot low for it to be smothered by Fox. After United cleared a Thistle corner on the 22nd minute, Penrice played the ball to Dario Zanatta in the center of the box who volleyed the ball high for it to be saved comfortably by Siegrist in the center of the goal. With ten minutes of the half to go, Miller had the ball in the net for Thistle after a save from Siegrist but the linesman had his flag up quickly much to the dismay of the away fans. Just a minute later, Appéré had a chance to cross the ball but he drilled it towards goal forcing Fox to parry the ball into the Eddie Thompson Stand for a United corner. A largely uneventful first half came to a close after Liam Smith crossed the ball to McMullan who headed the ball into the arms of Fox.

United started the second half with a bit more urgency than they had the first. Calum Butcher’s early close-range effort was tipped over the bar by the Jags Keeper. On the 47th minute, Ian Harkes, positioned on the edge of the box, had a powerful shot blocked from a Partick defender. One minute later Shankland struck the crossbar with from a left footed shot outside the box. After a positive start to the beginning of the second half Lawrence Shankland headed home his 15th league goal in 11 games after Appéré crossed him the ball, making the score 1-0. With twenty minutes to go Nicky Clark was very close to taking United two goals ahead, with a curling effort from just inside the box. However, it skirted just wide of the post and out for a goal kick. On the 80th minute Partick came agonisingly close to pulling the score level as Benji attempted to push the ball over the cross bar. It bounced behind Siegrist and rolled along the goal mouth. The final ten minutes were closer than most fans would have liked but United managed to hold off Partick’s attack. 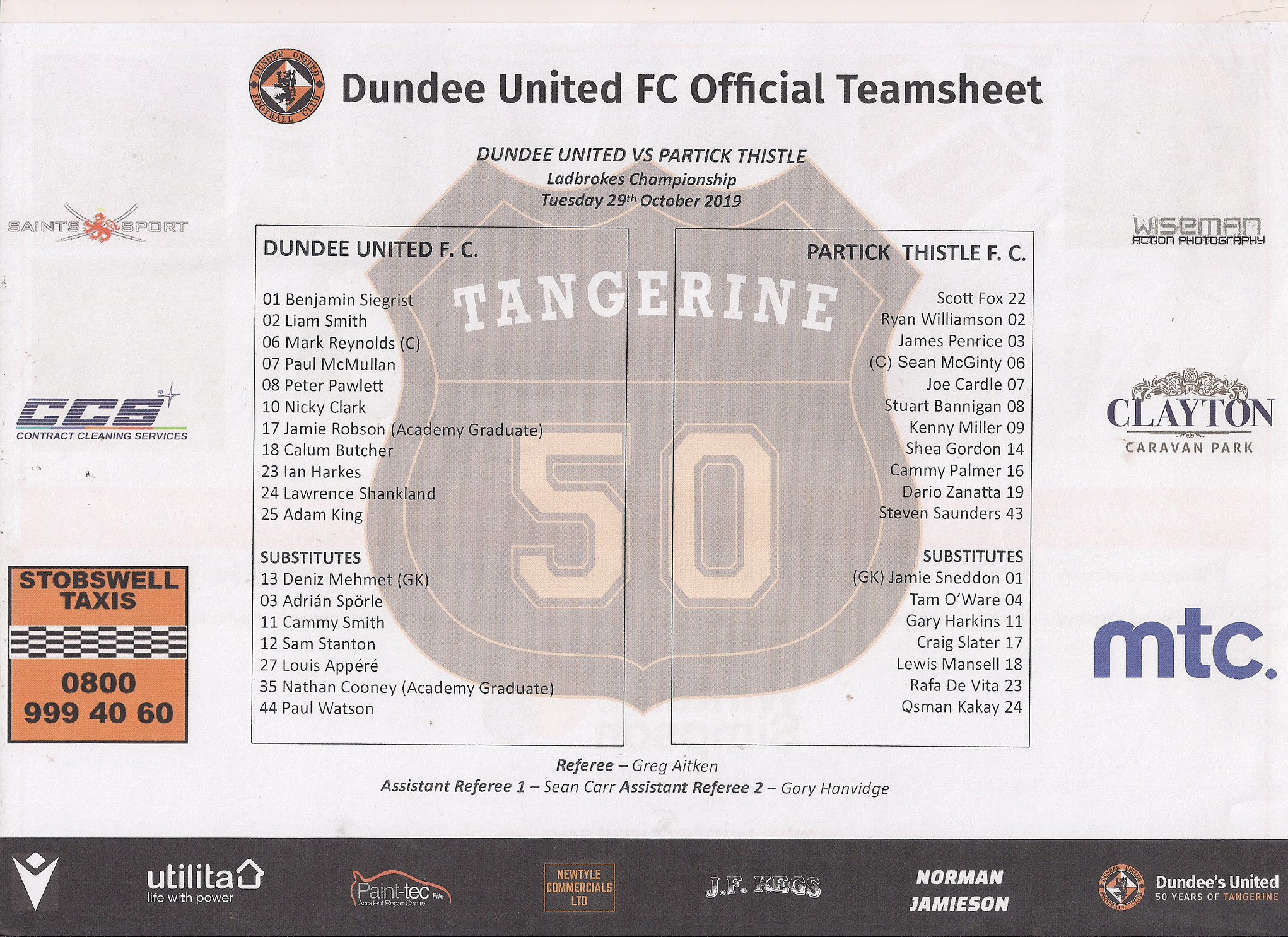 After a difficult couple of weeks in which we lost two games, plus the negativity that accompanies that, I was very pleased with the players response against Dunfermline at the weekend. They showed a lot of strength of character, especially first half, to pass the ball and control the game the way they did. Getting two goals put us in a very comfortable position. Unfortunately, second half, the game became very, very scrappy and we never really hit the heights of the opening period but, by then, the job was done. I was absolutely delighted for Nicky dark. He started the season and did really, really well but couldn't get off the mark. He then had a hamstring problem which side-lined him for a while, so his return is extremely welcome. He gives us genuine quality next to Shanks with his great movement and I think the two will forge a great partnership if we can keep Nicky fit. Another big plus factor was the return of Jamie Robson. Being without him for the last few weeks has made things difficult because we have had to shift the back four about with a right-back at left back and a centre-half at right-back. It never really gave us any balance, so we were desperate to get him back and we pushed him quite hard to have him available on Saturday and that told towards the end as he was flagging a wee bit in the last half hour. But it definitely gave us added quality and allowed Liam Smith to switch back to the right and give us more of an attacking threat down that flank.

Nice as it is to go into tonight's match with Partick Thistle with a wee lead at the top of the table, it is still only the second game of the second quarter. With two games coming in four days, that can change quickly, but it does afford us an opportunity to put the foot down. Tonight's game is massive because if we can get a favourable result, we can then go up to Inverness who at the moment are one of our main challengers. Partick Thistle whom we welcome tonight are under new management since we last played them and, knowing lan McCall, I am sure after the good job he did at Ayr, I expect him to do the same at Partick. He started his regime there very well and despite their disappointing defeat to Arbroath on Saturday, I am sure they will bounce back. It is undoubtedly a tough game for us. They made it hard for us at Firhill earlier in the season and beat us there last season as well. They play some decent football at the back and they have Dario Zanatta who played under me at Hearts and is a very good player. In fact, there are a lot of good players in their ranks with good experience as well, so we must be well prepared for the challenge ahead. It is the Championship in which every game is tough; everyone has good players and you have to be at the top of your game every week, and tonight will be no exception.