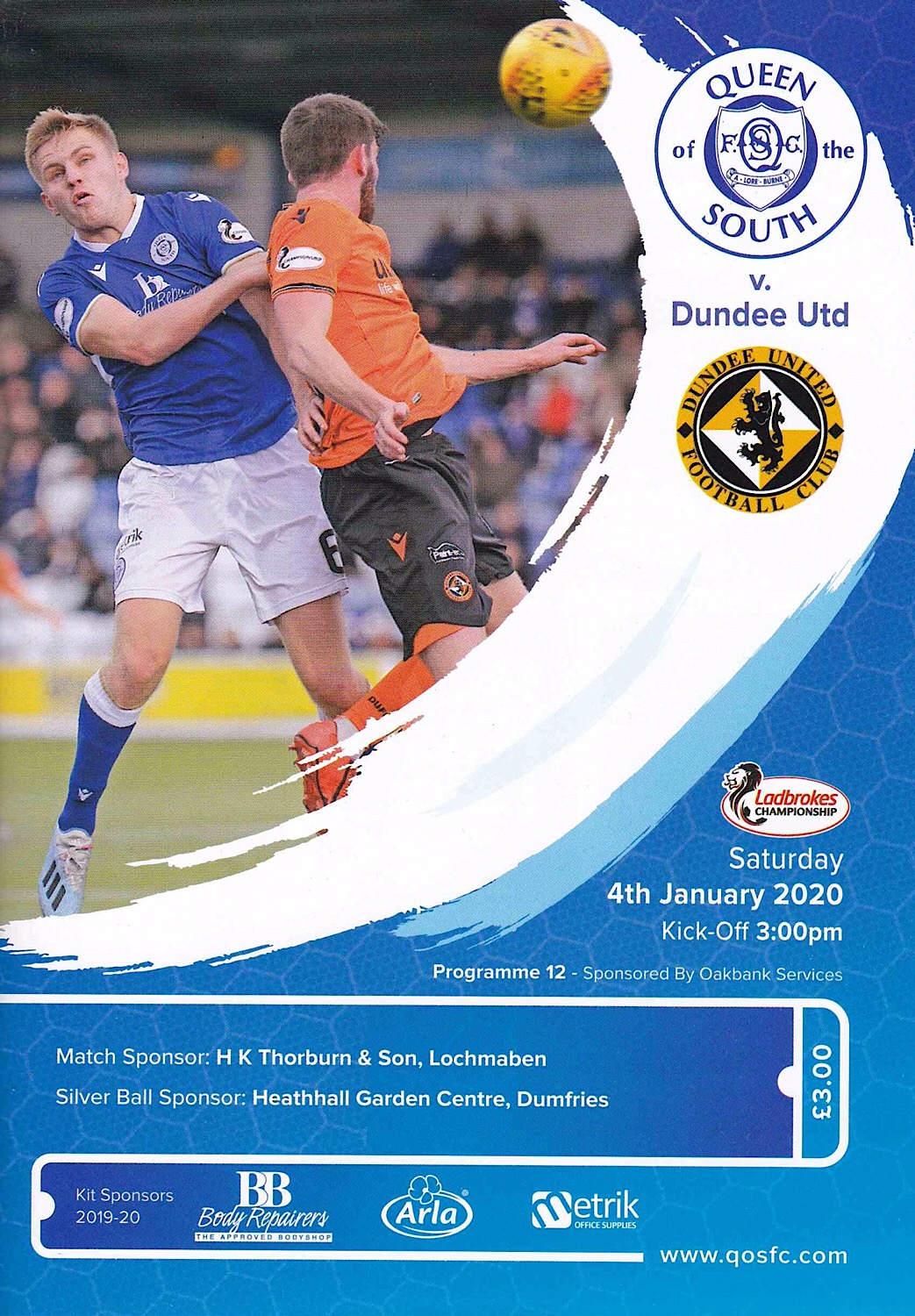 For United’s first game of the new decade, there were three changes in the line-up from the side that drew with Dundee. Mark Connolly came in for Mark Reynolds who dropped down to the bench thereby missing his first league game of the season with Calum Butcher taking over the captain’s armband. With Harkes out injured, Adrián Spörle, a sub in the derby, started for the first time in three months Academy Graduate Declan Glass – only just back from his loan spell with Cove Rangers was thrust into the action in place of the injured Paul McMullan. Three Academy graduates - Logan Chalmers, Ross Graham, and Chris Mochrie were on the bench. The hosts who were the last team to beat United also showed three changes with Darren Brownlie, Michael Paton and Jack Hamilton coming into the side that won 2-1 at Ayr United last week.

Queens threatened in the second minute with Stephen Dobbie cutting in from the left and curling in a shot which Benji Siegrist held comfortably. United immediately replied with a thunderous Spörle shot being deflected over for a corner from which Robby McCrorie punched a Connolly header. away from the head of Shankland. In what was an enterprising start by both sides, following a corner, Siegrist had to fist away a Brownlie header immediately afterwards. On ten minutes, Mercer was booked for clattering into Jamie Robson aft he played the ball up field. A hard driven low cross from Appéré was gratefully cleared for a corner with Lawrence Shankland set to strike. Connolly headed over a Nicky Clark free-kick on 16 minutes and, six minutes later, Shankland was on the end of Appéré’s through ball but the angle was too great and McRorie saved it at his near post. On the 29 minute mark, Glass had an angled prodded effort on target but it lacked sufficient power to trouble the keeper. Ten minutes from the end of the first period, Butcher was booked for a late challenge on Abdul Osman. But four minutes later, Queens came closest to breaking the deadlock. Hamilton fired in a close-range effort from a Dobbie cut-back which was brilliantly blocked by Liam Smith allowing Siegrist to grab the loose ball. Just before the break, Paton became the third booking of the game for tripping Robson.

United opened the second half on the offensive as Shankland won possession, but the home side cleared the danger. And three minutes in United took the lead. Nicky Clark drilled over a corner from which Mark Connolly met to power home a header well out of McRorie’s reach to send the large contingent of Arabs into rapturous celebration. Five minutes later, McRorie prevented his side conceding a second when he tipped a Liam Smith first time screamer on to the outside of the post for a corner. There was a blow for United on the hour mark when Butcher had to be replaced with Adam King with Connolly taking the captain’s armband. Just before the midpoint of the half, coach Gordon Forrest was booked. And a minute later, the Doonhamers made their first substitution with Ross Irving replacing Hamilton. With United now dominating proceedings, Glass drilled a 20-yarder just past the far post. Quarter of an hour from the end, Connolly came off inured with Reynolds, the man he had replaced, taking over his position and the captaincy. Before play resumed, Queens skipper Dobbie was booked as was Reynolds soon afterwards following a foul by King. Though they had rarely threatened in the second half, Queens went close to equalising with six minutes left when Holt got his head to a cross from the right, but the ball drifted past the far post. As United tried to run the clock down, Siegrist was booked for time-wasting. 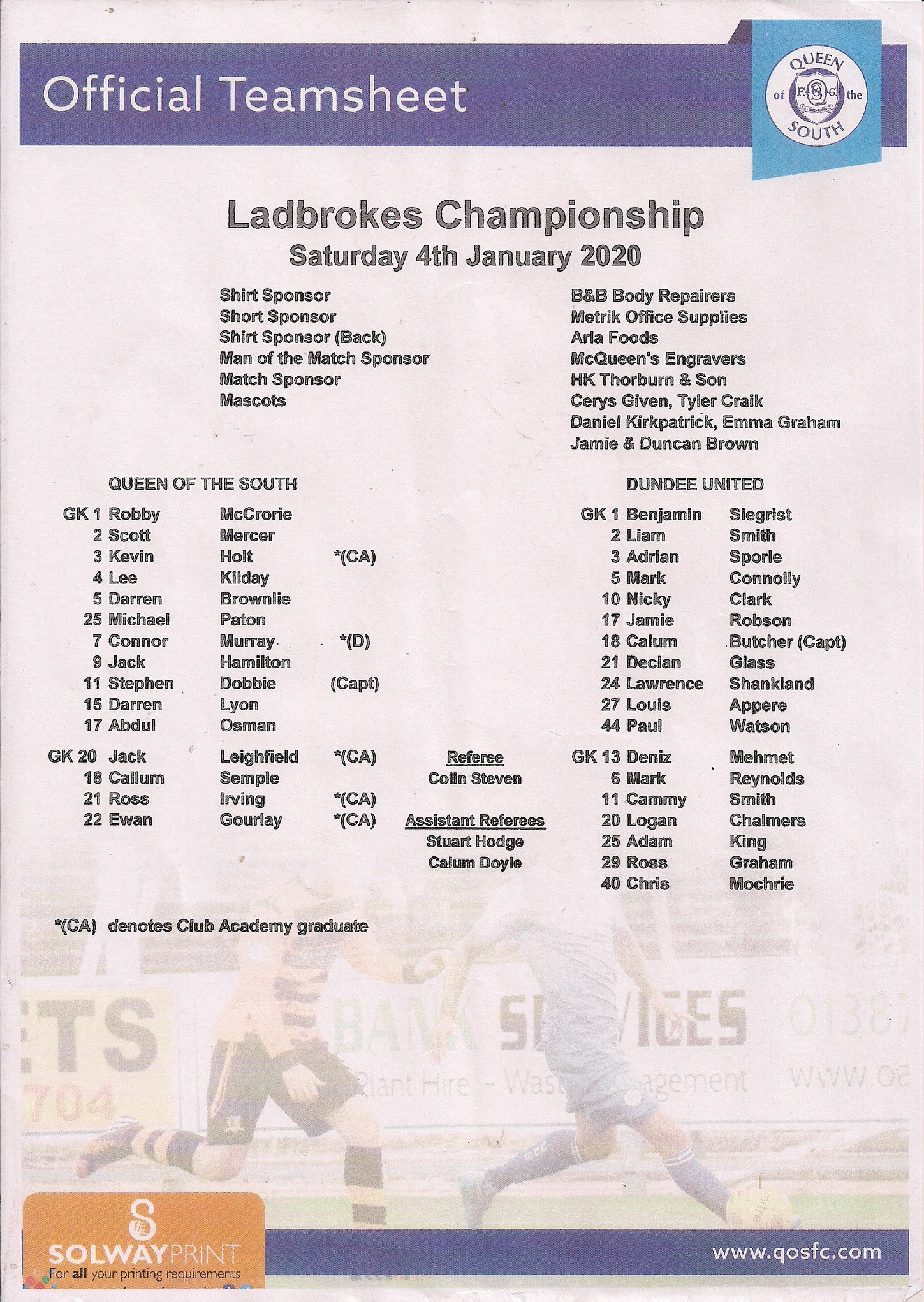