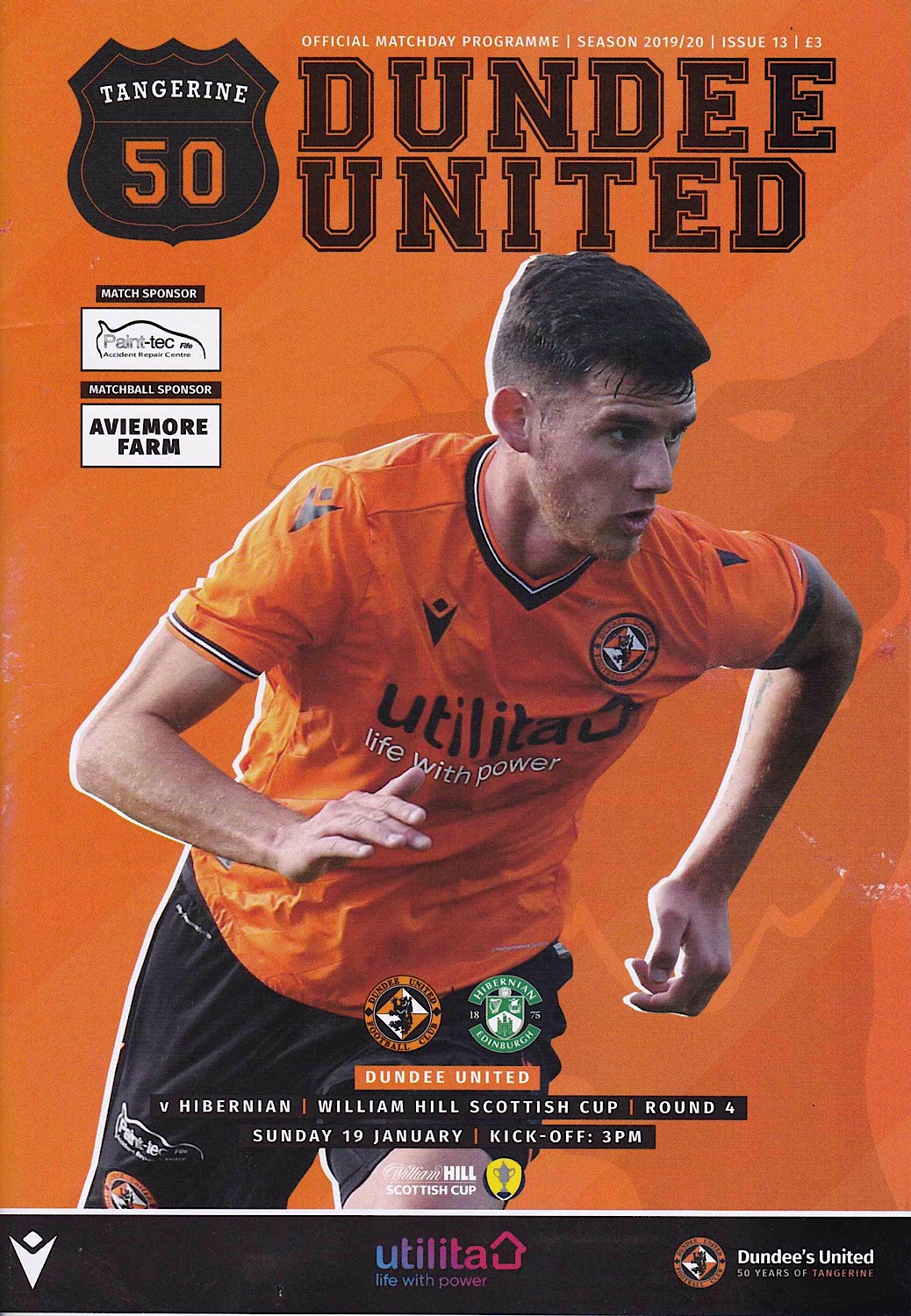 Following the excellent 4-1 win at Partick last Saturday, Robbie Neilson showed just how strong a squad he has by making five changes to the starting line-up for the tie. Missing were the injured Nicky Clark with Adrián Spörle, Mark Reynolds, Declan Glass and Appéré all dropping to the bench. The visitors named an experienced side with former United man Scott Allan one of their main threats.

Hibs were the first to threaten after two minutes when Florian Kamberi fired in a shot that beat Benji Siegrist, but Mark Connolly was on the line to block his effort. Five minutes later Hibs did take the lead. A reverse pass from Boyle found Christian Doidge who shot low past the helpless Siegrist. With 12 minutes on the clock United had their first effort on goal when Shankland headed the ball into the feet of Paul Watson who fired over. Hibs then broke forward and the pacy Martin Boyle found Melker Hallberg but the United keeper made a fine save to deny him. Shortly after Lewis Stevenson was booked for a foul on McMullan and then Allan combined with Kamberi whose deflected effort was gathered easily by Siegrist. Ten minutes before the interval Allan and Kamberi were again involved. The former United man set up his team-mate in the box but this time his shot deflected off a United defender and Siegrist managed to save with his right foot. Right on the stroke of half time, United somehow pulled themselves level. Harkes picked the ball up in the Hibs half and slipped it perfectly through to Lawrence Shankland who showed great composure and finished under the advancing Marciano.

Hibs were forced into a change at the break with David Gray replacing Jason Naismith. United started brightly and Pawlett had a half chance but the defence cleared just before he was able to get his shot in. Two minutes after the restart the Premiership side restored their lead. Kamberi broke forward to set up Martin Boyle who drilled the ball low past Siegrist from 22 yards. Darren McGregor then came on for the injured Ryan Porteous for Hibs. The visitors continued to look the more likely and they had further efforts firstly from a Doidge header and then a long-range shot from Kamberi. Allan was then next to try his luck but his shot flew over the crossbar. Robbie Neilson then made his first change by bringing on Appéré in place of Pawlett. Butcher then picked up United's first booking following a foul on Allan. With 73 minutes gone, United dragged themselves level again this time through a piece of individual brilliance. Louis Appéré cut in from the left before curling a low right-foot shot into the bottom corner via the post. Appéré was really making his mark on the game now and his pass set up Robson who sent in a cross that was well dealt with in the six-yard box. He then broke forward again and curled a similar effort to his goal but this time it was just wide. With ten minutes left Glass came on for United with Harkes making way. Both sides were looking to snatch a winner and Watson did superbly to block a Boyle shot with his head. Hibs almost snatched the victory at the end when the ball was flicked through to Doidge but Siegrist saved well from very close range. 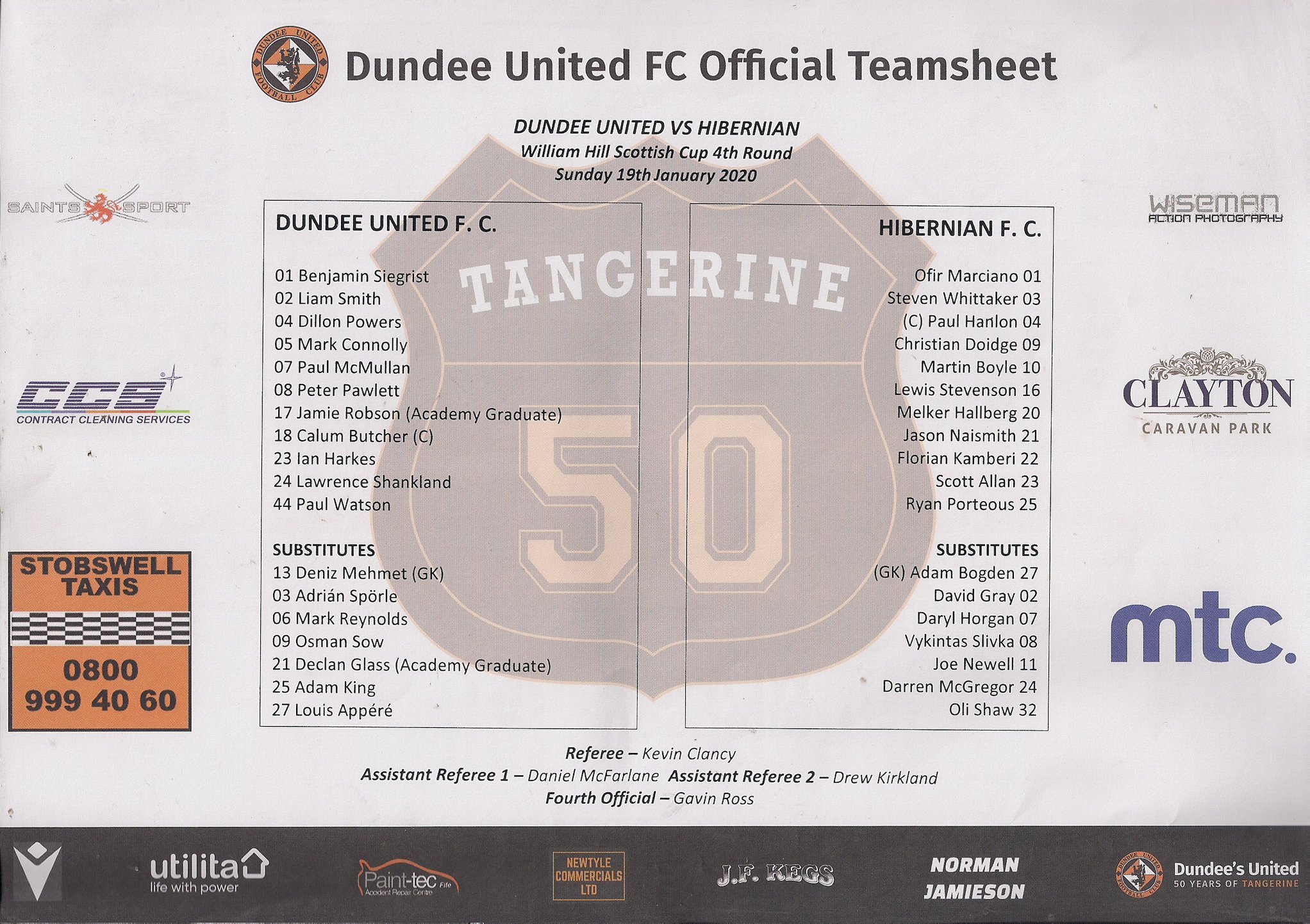 First of all, with this being our first home game of the new year, can I wish everyone a belated happy new year. Certainly we have started 2020 well with away wins at Queen of the South and Patrick Thistle. Palmerston is always a very difficult place to go as we know only too well from our 4-0 defeat there earlier in the season. And the recent meeting was much the same with not a lot in it between the teams, but performance-wise, we managed to get the goal and see it out It's a very difficult surface to play and Queens' knowledge of it always gives them that little bit of an edge. So we were just happy to get three points and get up the road. Then last week at Partick Thistle, backed by a tremendous support in excess of 1500 fans,I thought for the first 25 minutes, we weren't really in the game. However, once we got a wee bit of composure, passed it, and got Dillon Powers on the ball, we took control. Delighted as we were for Lawrence Shankland to get his hat-trick, the afternoon was a wee bit marred by the injury to Nicky Clark. Obviously, we are devastated for Nicky. Having seen it, we knew at the time it was going to be a bad one. He is going to be out for a while and was operated on last Thursday, so it looks like it will be next season before we see him again.

Clearly, that is disappointing, but we have guys who are coming back in to give us enough cover. Declan Glass has come back from Cove and done well, Peter Pawlett is back training and playing well, Osman Sow also played in a bounce game and we had Mochrie who came on and did well so we have plenty of options in these positions. In addition, we introduced Dillon Powers at Firhill who has great experience in the MLS. Indeed, Gordon Forrest who knew him from when he was out at Vancouver, thought he was one of the best players out there. So when his name cropped up, we had a right go at getting him in. We didn't think we would get him but thankfully we have given how well he performed on debut. This afternoon of course, we have the welcome break away from the league campaign against Hibs in the William Hill Scottish Cup for what is probably the tie of the round. Whilst obviously promotion is the number one priority, this Club has a very proud cup tradition and it is important that we enjoy a good cup run because it is something that we and all our fans would wish for. Hibs have been doing well recently under Jack Ross in the league, therefore it is a good opportunity for us to see where we are in comparison to teams in the top flight. Whilst it has been business as usual for us, Hibs have had a two-week winter break and it is hard to tell what effect that will have on them. Some teams come back flying, whilst others can take a wee bit of time to get going again. I am sure they will have been working hard on a few things but, from our perspective, it is a great game for us. Hopefully, we will get a full house here which would be great. Unlike almost all our matches this season, with the exception of the Hearts game at the start of the season, we go into this game in the position of underdogs, but it is a good marker to see where we are if we do manage to get up. They are a good team who play good football but we believe that if we can put on a good performance, we'll stand a good chance of winning.