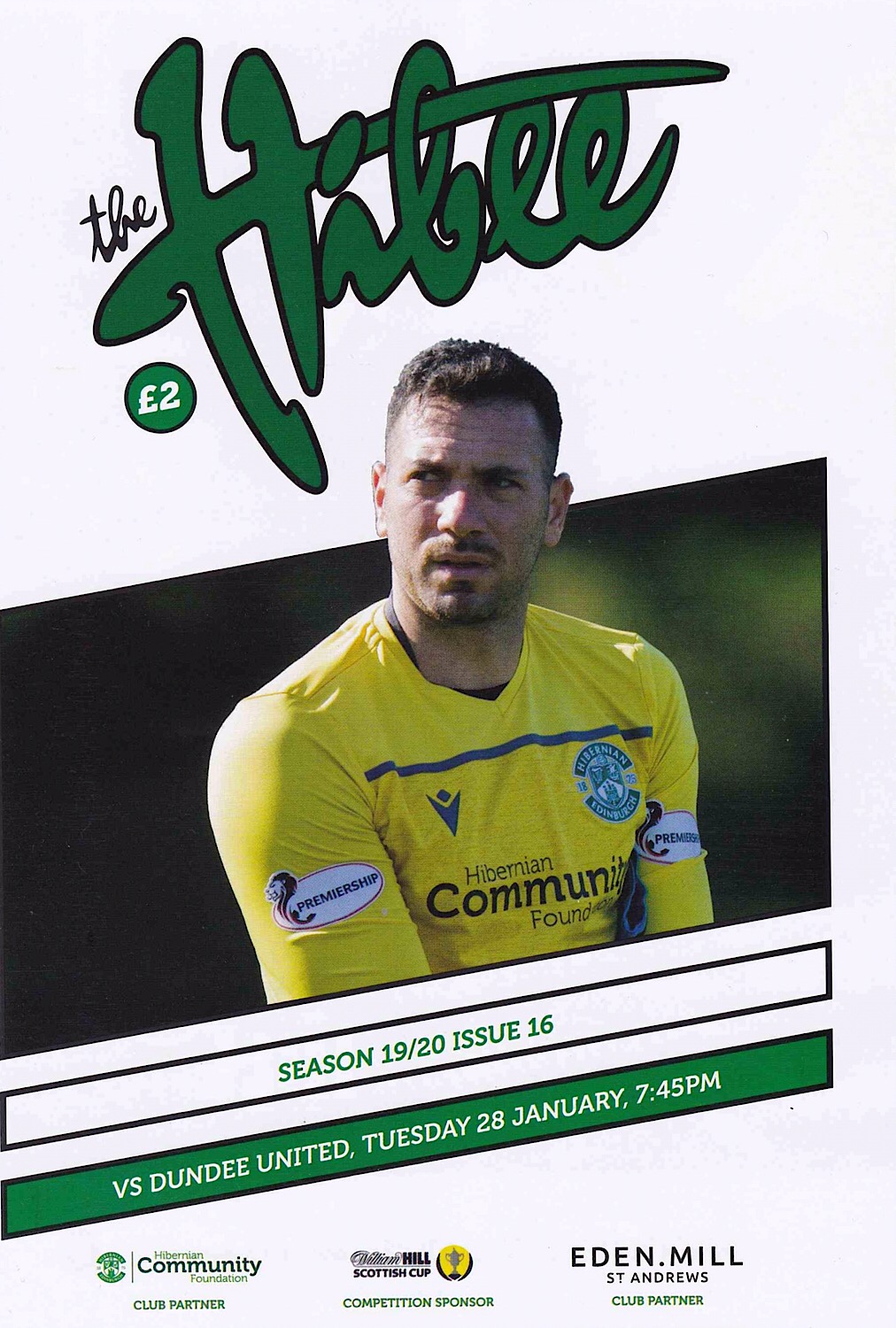 The only change in the Tangerines’ line-up from the side that drew with Morton was Calum Butcher returning in midfield and striker Osman Sow dropping to the bench. Declan Glass was on the bench after missing out the previous Saturday, while Academy Graduates Chris Mochrie and Lewis Neilson dropped out.

United fans almost filled the lower tier of the visitors' end with a few more upstairs and they were in good voice at what was a lively start by both sides. But their hearts must have been in their mouths when Steven Whittaker waltzed through two tackles to get a clear shot on goal but, to their great relief, his shot from just inside the box clipped the outside of the post. The first ten minutes flew past as play ebbed and flowed from end to end, until United took the lead. Unsurprisingly, it was that man Lawrence Shankland who struck with his 27th of the season. Collecting a Peter Pawlett pass with his back to goal, Lawrence Shankland swivelled before unleashing a glorious 20-yard strike past a helpless Ofir Marciano in the Hibs goal. On 16 minutes, it was Whittaker who again threatened for the Hibees driving through in the right channel before hammering a shot which the advancing Benji Siegrist blocked with his chest. Three minutes later, Christian Doidge tried his luck, only to shoot wildly high and wide from long range. Hibs’ efforts to equalise intensified and, on 27 minutes, a run by Doidge almost forced an own goal by Jamie Robson as his challenge on the Welsh striker resulted in the ball flashing across the face of the goal and running out for a corner. On 34 minutes, a spell of United passion earned them their first corner from which Pawlett picked out the unmarked Shankland but, for once, his deadly finishing was absent as he fired well over from ten yards, though the support was clearly unhappy with the space he was allowed. Three minutes later, another Pawlett corner caused consternation in the home defence before the danger was cleared. But five minutes from the interval, Hibs were given a life-line when Butcher brought down Martin Boyle and ex-Tannadice midfielder Scott Allan sent Siegrist the wrong way from the resultant penalty.

Hibs pushed United back at the start of the second half but the Terrors’ defence held firm. Indeed, on the 50 minute mark, Shankland delivered an inviting cross but there were no takers as the ball flashed across the face of the goal. The pace of this enthralling encounter showed no signs of slackening as both sides looked to make that vital breakthrough. The threat that Allan and Boyle posed was highlighted with a precision pass over 30 yards from Allan to play Boyle in but fortunately he was ruled offside. But it was Joe Newell who was to undo the United defence on the hour mark when he drove to the bye-line on the left before drilling in a low cross which Christian Doidge swept home. United didn’t take this lying down. Almost immediately, United missed a great chance to level when Appéré went clean through only for Marciano to block his attempt. Tom James became the first player to be booked for tripping Louis Appéré on 63 minutes and two minutes later Spörle replaced Harkes. And, with his first touch, the Argentine had levelled, Adrián Sporle turned home a Liam Smith cross from the right with the aid of a deflection. In this ding-dong battle, Hibs regained the lead when Christian Doidge rose highest to power in a header from a corner via the underside of the bar with 15 minutes left. Sow replaced Pawlett three minutes later and, with eight minutes remaining, Glass replaced Appéré as the Terrors chased an equaliser. Instead, it was Hibs who got the next goal, with Christian Doidge completing his hat-trick with the clock showing 90 minutes played. 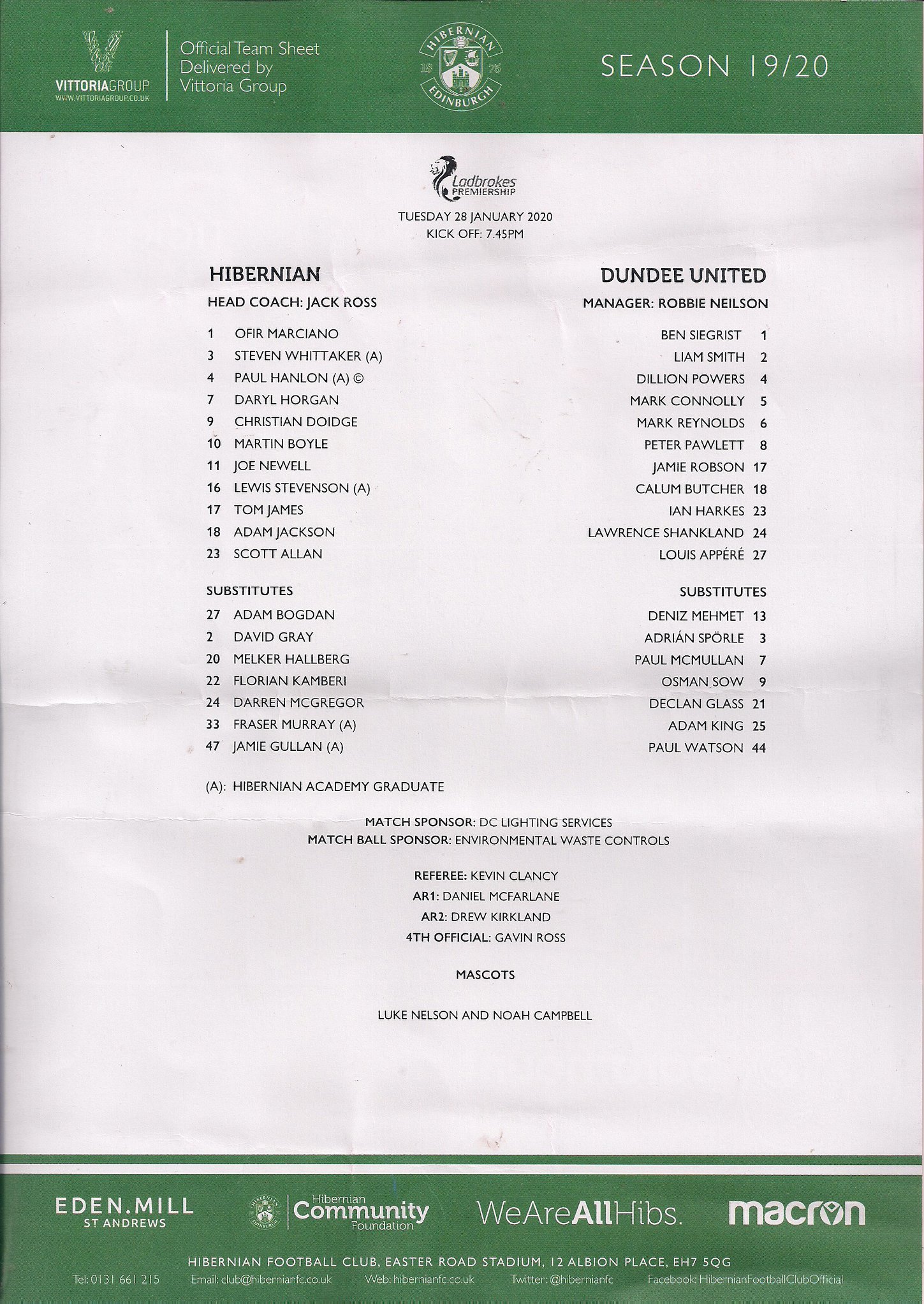