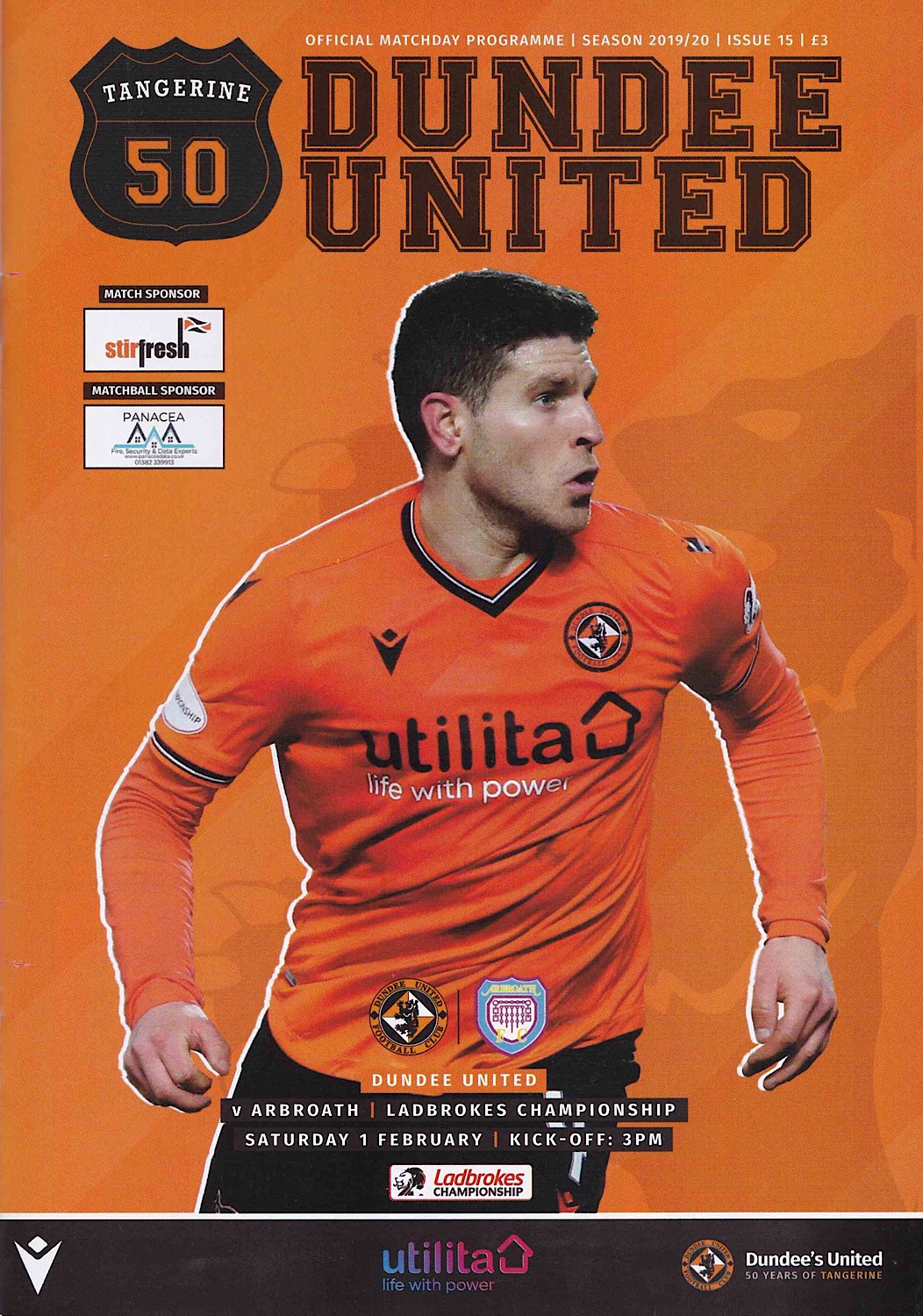 United manager Robbie Neilson made two changes to the team that started against Hibs, with Sow and Sporle stepping up from the bench. Harkes dropped down whilst Appéré missed out altogether. United had three Academy Graduates on the bench today with Glass, Mochrie and Neilson. Dick Campbell made four changes to the Arbroath line-up that played Falkirk in midweek. Gold and Swankie come in whilst new signing Wighton, signed on loan from Hearts, also made the starting eleven along with Hilson who was cup tied for the Falkirk game on Tuesday night. James Craigen, signed only last night from AFC Fylde on loan, made the bench.

United started brightly with Powers and Butcher seeing plenty of the ball in midfield in the opening exchanges. As expected from any Dick Campbell side, Arbroath were well organised and defending with a high line. The far side linesman was kept busy in the opening fifteen minutes due to United’s strikers being caught offside on a few occasions. United were forced into an early change when Sow was injured in the seventeenth minute, going down awkwardly in the box with Academy Graduate Declan Glass taking his place. United nearly went ahead in the twenty third minute. A good pass from Shankland found Pawlett in space on the left of the box. His well placed shot was just touched away by Gaston’s outstretched boot to keep the ball out. Against the run of play Arbroath went ahead in the twenty fifth minute. A cross from the left was neatly tucked away by new signing Craig Wighton. Reminiscent of last weekend against Morton, United would have to come from behind if they wanted to maintain their unbeaten home record. United kept up the pressure but were being thwarted by the disciplined Arbroath defence. Glass came close to an equaliser in the thirty seventh minute when his well placed shot from twenty yards was finger tipped over the crossbar by Gaston. The first half came to a close with the Gayfield side 1-0 ahead and leaving manager Robbie Neilson with plenty to think about in his half-time team talk.

United started the second half on the front foot and were unlucky not to equalise when a run and shot from Shankland flew over Gaston’s bar. Neilson’s half-time team talk had clearly called for more urgency in United’s play and that was apparent straight away. In the fiftieth minute Pawlett’s cut inside from the right resulted in his shot going just over the bar. United created more chances in the first five minutes of the second half than they had in the whole of the first half - they were now on the ascendancy and stringing the passes together. Pawlett and Smith down the right wing were the main instigators of United’s possession. United were forced into their second change of the game when previous substitute Glass had to go off with a head cut in the sixty second minute with Harkes replacing him. United huffed and puffed for the next twenty minutes as a succession of substitutes, free-kicks and injury stoppages continually halted play. The home side’s deliveries into the box were consistently thwarted by the Arbroath defence. In a rare glimpse on goal even the ever reliable Shankland managed to pull his shot wide with the goal at his mercy. As referee Alan Muir blew for full-time it was to be one of those bad days at the office for United. Arbroath’s 1-0 victory ended United’s unbeaten run at Tannadice this season. It will have given manager Robbie Neilson plenty to think about as we enter the final third of the season in the race for the Championship. 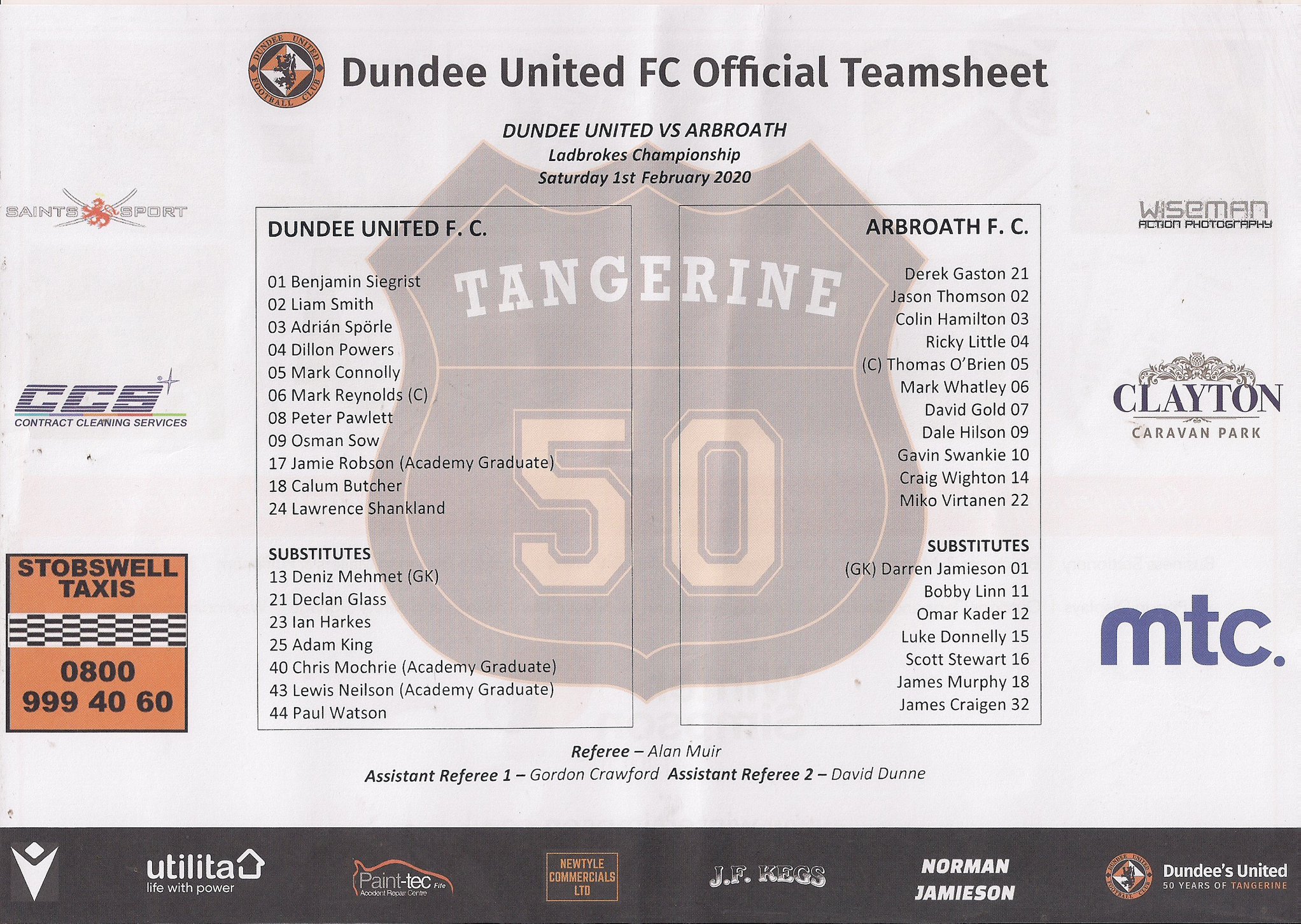 After the first match with Hibs, I said how pleased I was with our performance and, by and large, despite Tuesday's defeat, the same is true of the replay at Easter Road. Before the game, we spoke with the players about how difficult it is financially at this time of the year for fans to make the journey, so we wanted to ensure we put on a good performance and I thought we did that with the work rate and effort of the players. Obviously, we were disappointed to lose the game, particularly in the manner in which we conceded three of the goals. Conceding a penalty for the equaliser followed a poor decision to dive in and later we were punished for switching off at two set plays, but that is what happens when you are playing against a higher level team. And that came after we got off to a great start thanks to another special strike from Lawrence Shankland. I would have preferred that he had saved it until after the January transfer window. But he deserves better service. I thought he made some good runs and when we did get to him, he showed his quality, but I feel there is room for improvement in that area.

Whilst there were a lot of positives to take from the game, we still have a way to go. I think that if we do make it up, then we should think about going to places like Easter Road and winning games. Yes, it was a good performance on Tuesday, but the bottom line is that we came away with nothing. So, whilst t am pleased with the two performances against Hibs, at the end of the day, we are out of the cup. We went into the midweek cup tie on the back of a very tough match against Morton last Saturday. Having started the game exceptionally well, we lost a poor goal which gave them the impetus to sit in and try and kill the game, and that was exactly what they did to Italian 1980s levels! Certainly, it made it very difficult to get any flow in our game, but I was pleased with the way the players continued to do the right things and how the fans kept backing the team. On Morton's last visit we won 6-0, so this time they would have been delighted to score a goal and tried to kill the game. Inevitably, there are going to be more matches like this and, as a Club - players, staff and fans - we must show the same patience as last week which was rewarded by getting that late leveller. Though we have won the two previous meetings with Arbroath, whom we welcome this afternoon, they have proved a good team with the likes of Linn plus the recent additions of Craig Whigton and Dale Hilson who are both of good quality. So, I expect them to be a bit more open than what we faced last week. And, as ever, our fans play their part. It is up to the players to get the energy on the pitch. But there are periods in the game where those levels may dip a wee bit and it is important that we get the support from the stands. To be fair, it has been there all season. For example after we went behind at Easter Road, the fans were right behind us and stayed right to the end which the players really appreciated. It is thattogetherness which will, hopefully, see us maintain our excellent home record this afternoon, thereby taking another step towards the title.