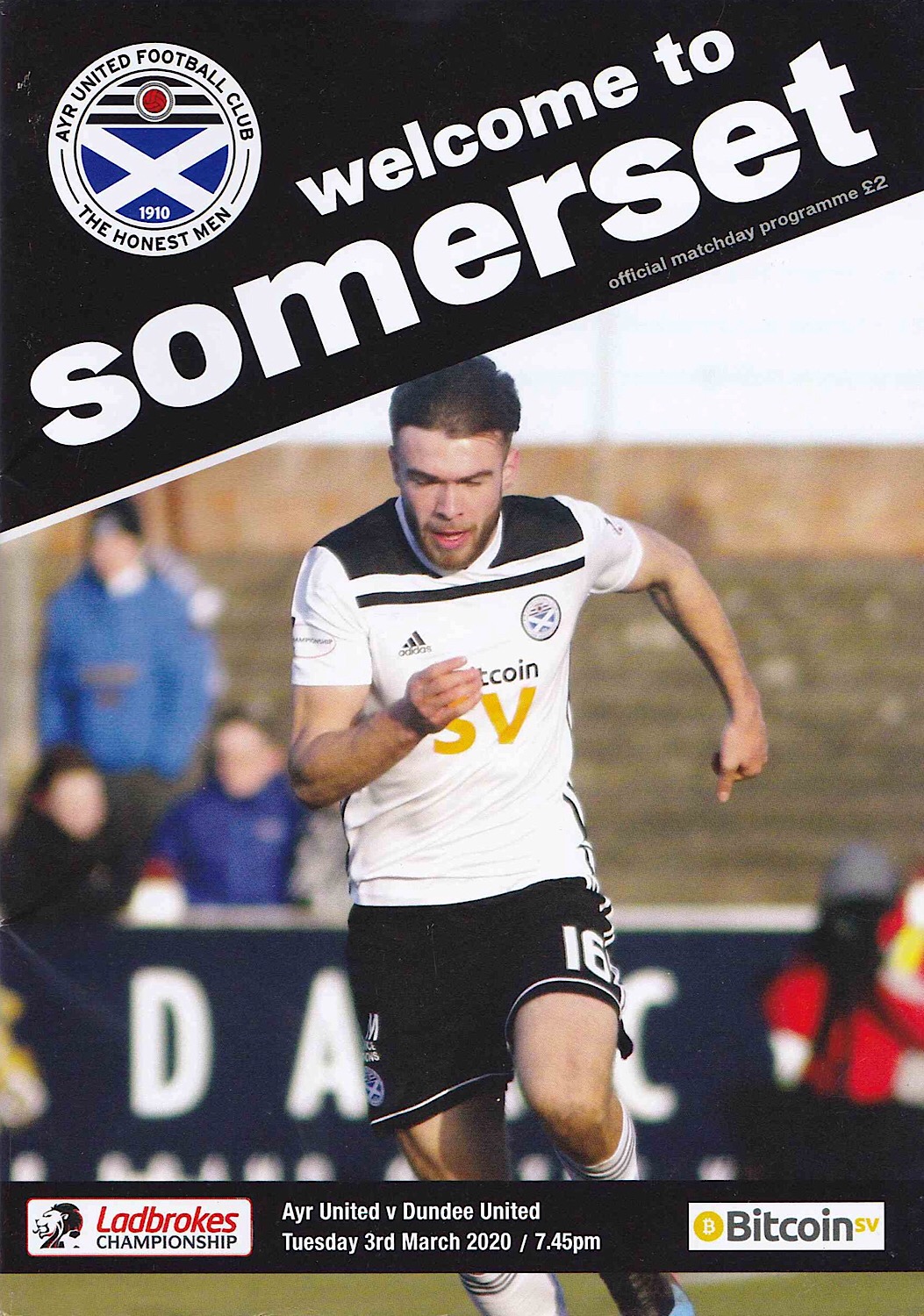 Following last Saturday’s defeat at Dunfermline, Head Coach Robbie Neilson made two changes - Mark Reynolds and Paul McMullan were restored with Jamie Robson and Peter Pawlett dropping to the bench. Ayr had just one change from the side that won 2-0 at Alloa – Aaron Muirhead coming in for Connor Malley. Two former Tangerines were in the Somerset side, player/manager Mark Kerr and skipper Steven Bell. A third, Grant Gillespie, was on the bench.

United were playing a 4-4-2 formation and got off to an enterprising start with Ian Hakes heading a McMullan cross wide after five minutes. And they maintained the pressure with a real stramash in the box which ultimately resulted in Louis Appéré having a cross-cum-shot beaten away by keeper Ross Doohan. At the other end, Ayr won a corner from which Alan Forrest fired past the near post. And on 18 minutes, an Aaron Drinin header was easily plucked out of the air by Ben Siegrist. McMullan and Appéré swapped wings with the former looking very much in the mood with some mazy runs. On 26 minutes, Luke McCowan cut in from the right and drilled in a low shot which Siegrist saved comfortably. But the home side had started to take a grip of proceedings with Kell embarking on a good run, but fortunately his attempted finish was totally wayward. That spell of home pressure was broken when Rakish Bingham collected a pass from Reynolds and fired in a shot on the turn from 20 yards which drifted past the far post after 33 minutes. Still Ayr showed the greater threat on the counter-attack, Kelly screwing a shot wide four minutes from the interval. But with a couple of minutes of the half left, United fashioned their best chance. Harkes played in Appéré who rounded the keeper to get to the bye-line and deliver a cross which Daniel Harvie headed clear from the in-rushing McMullan. So an evenly contested first half ended goalless with neither side able to unlock the defences.

As United made a positive start to the second period, Ayr’s Harvie was booked four minutes after the restart. A fine free-kick delivery from Dillon Powers found Mark Connolly but the home defence managed to clear the danger. It wasn’t until just after the hour mark that Ayr had an effort on goal, but Kelly’s free-kick slipped a foot or so over the bar.
Bingham was booked for deliberate handball after 64 minutes and soon was subbed with Pawlett. On 66 minutes, Roscoe’s overhead kick wasn’t too far away but, a minute later, United had the clearest-cut opening so far. McMullan squared the ball to Harkes in space and the American, unfortunately, sliced his shot wide. With quarter of an hour left, McMullan cramped up and was replaced by Robson. The home side carved out a couple of chances with a Jordan Houston header followed by Dirnin’s long-range pile-driver. With time running out, Harvie blasted a shot wide of the post. Then, in the last minute, Drinin fired in a shot through a ruck of players which Siegrist gratefully held. 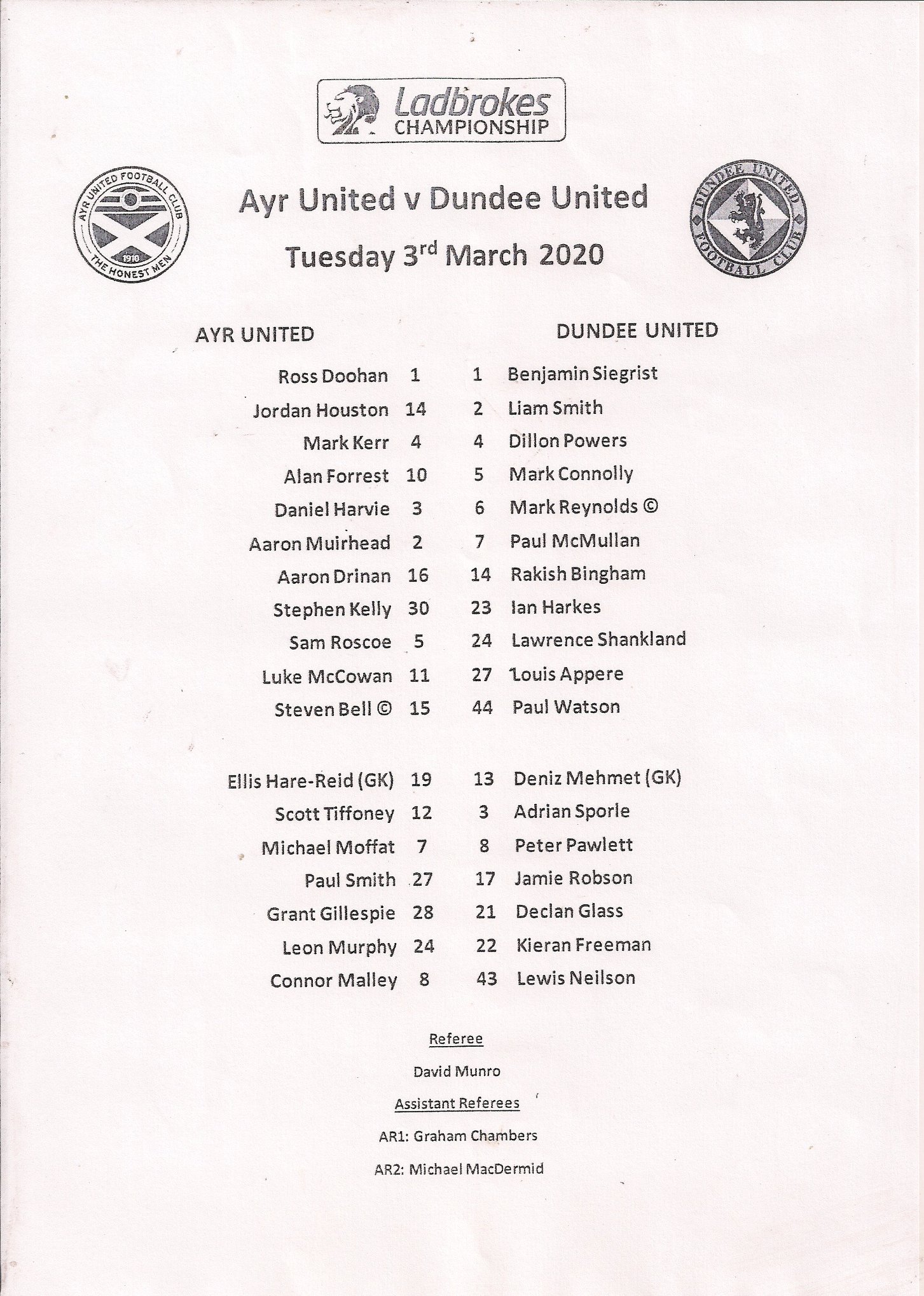