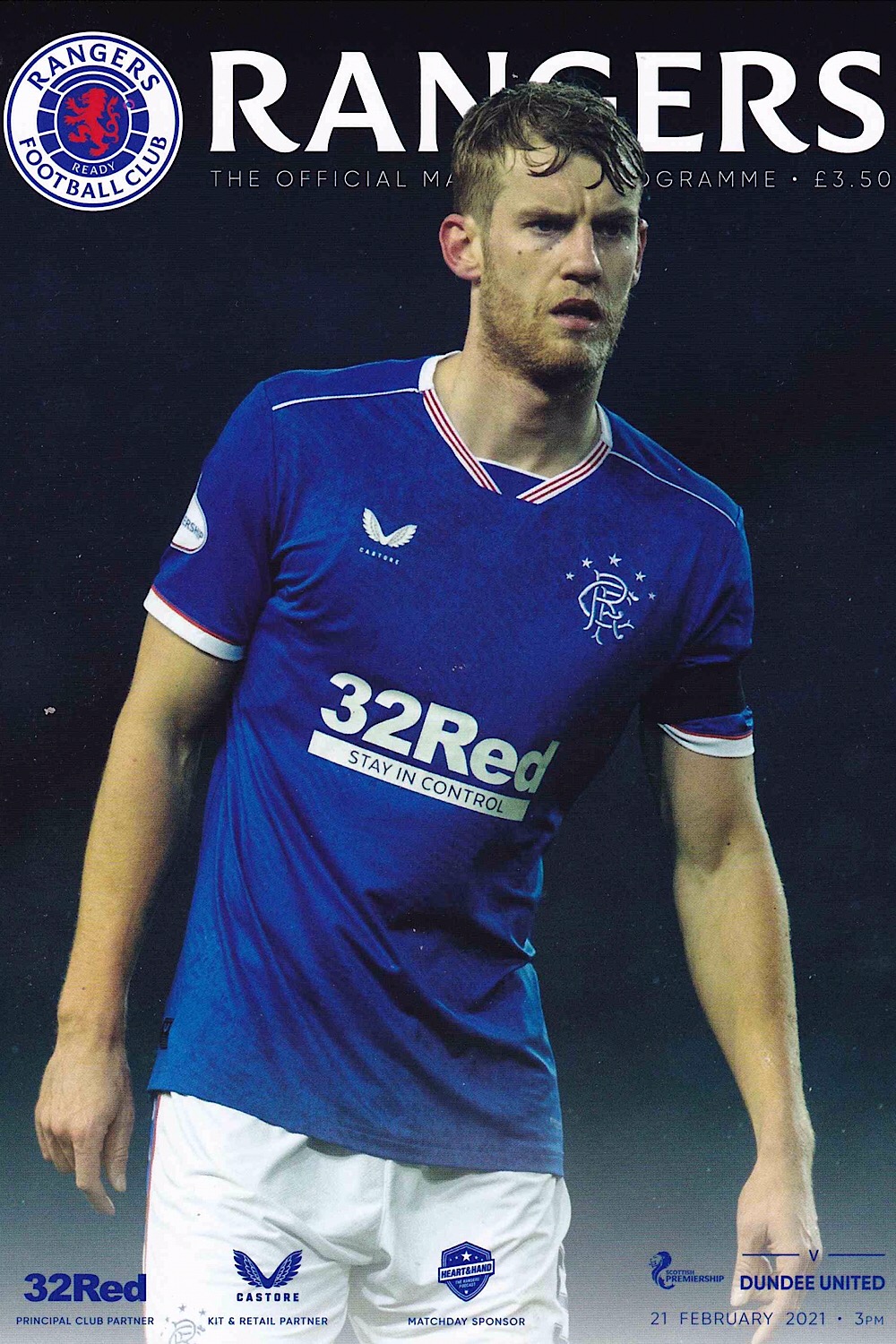 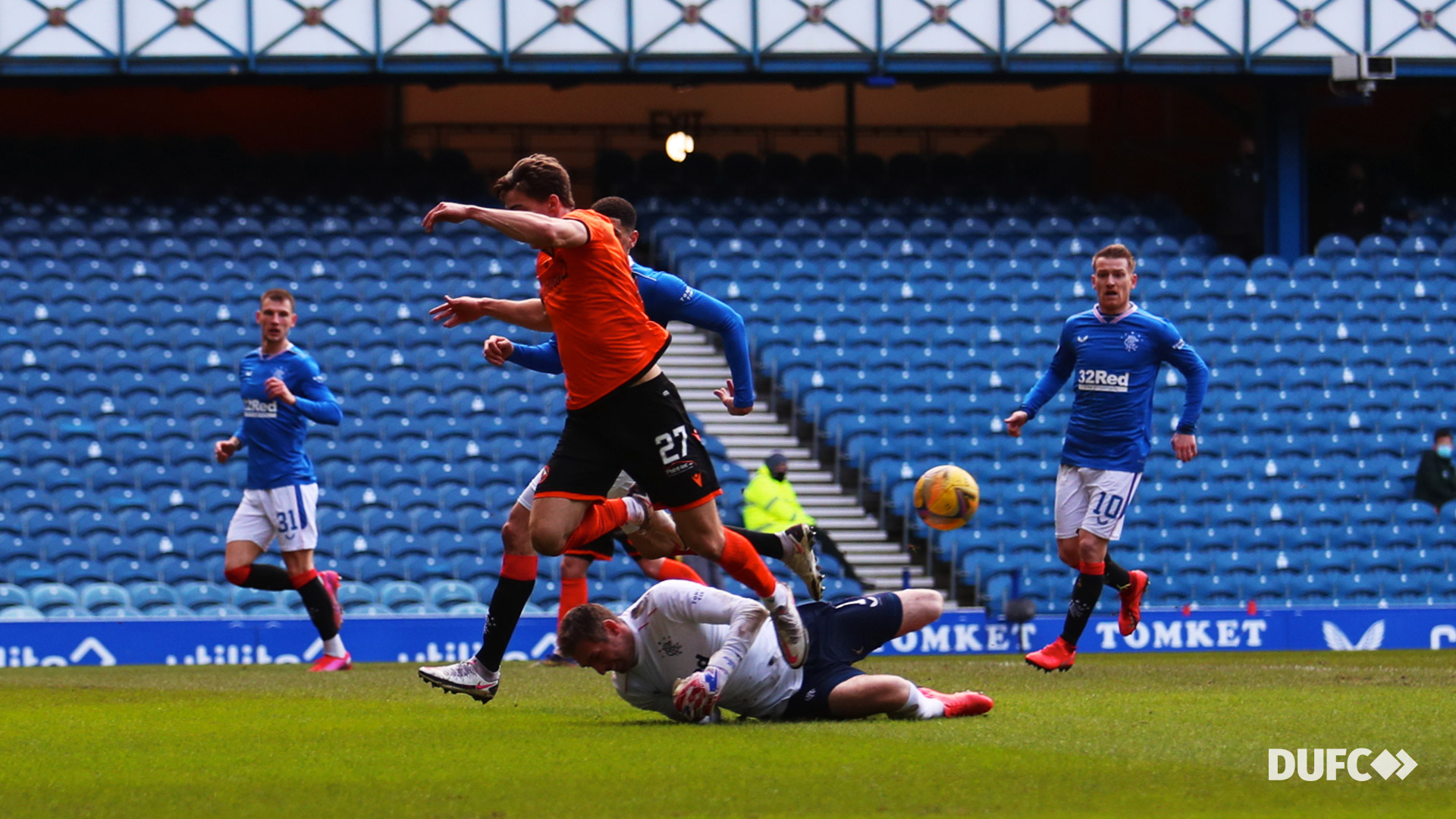 United travelled to Govan in hope rather than expectation of stopping Steven Gerrard’s juggernaut Bears, who remain unbeaten in the league this season. However the Terrors have enjoyed their own fine form recently, with two wins on the spin prior to the trip to Ibrox. Micky Mellon made two changes to the side that defeated Livingston, the suspended Peter Pawlett and Adrian Sporle made way for Ian Harkes and ex-Rangers man Nicky Clark.

Despite being the underdogs, it was United who started on the front foot. Liam Smith prodded a pass through the Rangers press to Louis Appere who returned to the full back after some good hold-up play. Smith would set a one-touch lay-off into the path of Lawrence Shankland, who burst through the hosts’ rear-guard to go one-on-one with McGregor, but the frontman couldn’t elevate his shot enough to find the back of the net. United threatened once again as Butcher found Appere in a congested penalty area, however his low fizzed cross only found the feet of Leon Balogun inside the Rangers 6-yard-box. Rangers would retaliate to United’s early dominance with Joe Aribo cutting in from the left and firing a right-foot effort goalward, Siegrist pulling off a fantastic save low to his left to deny the number 17. Appere then had 2 chances to send United ahead. The first a speculative effort from 25-yards forcing the Blues’ keeper into action, and the second saw Appere in behind the Rangers backline but McGregor once again snuffed out the danger, as the Fifer slightly hesitated from fully committing to the ball. Rangers would find the breakthrough on the 35th minute. A twisting and turning Aribo shot from the right corner of the box, which deflected off Ianis Hagi and past the bamboozled Siegrist to send the hosts into an undeserved lead. Gerrard’s men doubled their advantage just three minutes later, again with a slice of fortune. Barisic’s deep cross found Balogun at the far post, who headed back to Ryan Kent just behind the penalty spot, and the Englishman’s volley deflected off the unfortunate Ryan Edwards to wrong-foot Siegrist. The home side could’ve added a third on the stroke of half-time, but Benji Siegrist’s outstretched palm prevented Morelos from killing the game with a header from three yards.

The second half began in the same fashion as the first ended. 3 minutes after the restart Joe Aribo put his team out of sight, with a thundering left foot drive from the corner of the 18-yard box leaving Siegrist helpless as the ball headed for the postage stamp. The hosts added a fourth with just over 25 minutes remaining. A rare error from the United stopper saw him thump the ball off the pressing Alfredo Morelos, and the Swiss could only watch as the ball trundled over the line. Siegrist redeemed himself a few minutes later with a fabulous save from Barisic’s well-struck penalty, following Jeando Fuchs’ foul on Morelos in the United area. Substitute Marc McNulty would find United a consolation goal 4 minutes from time, as the Leith-born forward rolled a precise left foot shot past the furious McGregor from 20-yards following neat link-up play with strike-partner Lawrence Shankland. McNulty’s goal was just the second goal the home side had conceded at Ibrox all season.

One positive Mellon’s side could take from the heavy defeat was the debut of 16-year-old Kerr Smith, the defender entering the fray deep into stoppage time.