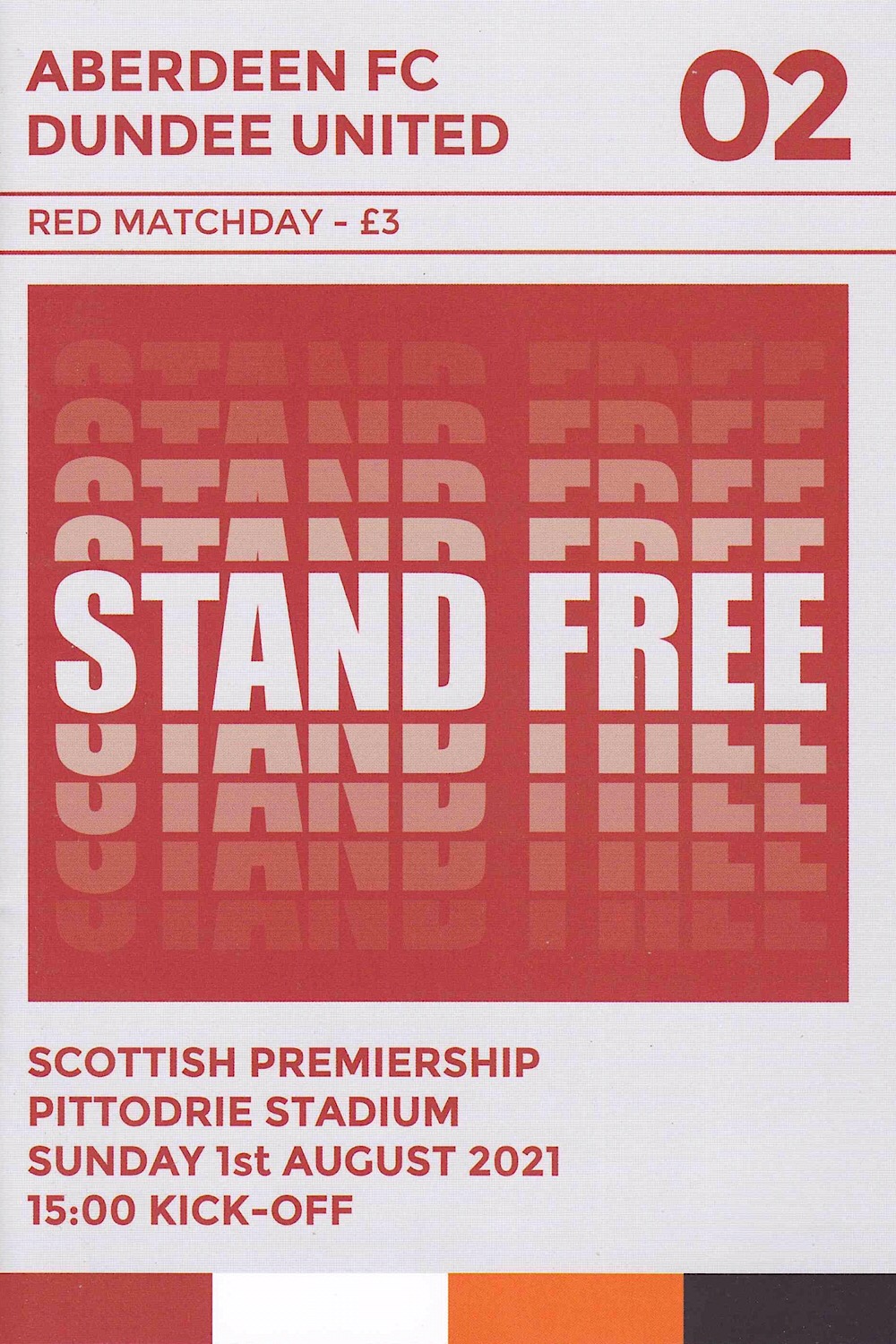 United travelled to the Granite City to face a new look Aberdeen side in the opening fixture of the 2021/22 Cinch Premiership campaign, the hosts starting 3 of their 7 summer signings. Tam Courts made 3 changes to the side that defeated East Fife in the final Premier Sports Cup match, as Duffy, Fuchs and Freeman dropped out for the incoming Robson, Reynolds and Shankland. The United boss also tweaked the set-up slightly, opting for an unorthodox 3-1-4-1-1 rather than the 3-5-2 deployed at Bayview. The visitors were a thorn in the Dons’ side last season, remaining undefeated in 4 games between the sides and keeping 4 clean sheets in the process. However, United would face a more formidable challenge this time against Steven Glass’ men, with Aberdeen heading into the match off the back of a comfortable 5-3 aggregate victory over Swedish outfit BK Häcken in the newly formed UEFA Conference League.

The hosts started brightly, enjoying the lion’s share of possession, and carved out the first chance of the game after five minutes. New Dons captain Scott Brown clipped the ball down the centre of United’s rear-guard and Charlie Mulgrew failed to deal with the high ball, heading into the path of marquee signing Christian Ramirez on the right side of the area who dragged his shot wide via a deflection off Mulgrew, sparking half-hearted appeals for handball amongst the 6,300 fans who returned to the terraces. Sightings of goal were few and far between for both sides in the opening 20 minutes, as United frustrated their opponents with a well organised mid-block which forced build up play wide, however failed to progress the ball themselves into the final third on more than one occasion. Following a flurry of set-pieces, Aberdeen began to go through the gears and put the United backline under pressure, and on the 27th minute the deadlock was broken by Jonny Hayes. Lewis Ferguson found space just behind the half-way line after a one-two with Emmanuel-Thomas and Hayes raced beyond the white shirts to beat an unorganised offside trap, latching on to Ferguson’s lofted pass.The Pittodrie veteran beat the onrushing Siegrist in a footrace and nicked the ball beyond the Swiss into the net from the right edge of the 6-yard box, despite the best efforts of Edwards on the United goal-line. After falling behind, Courts’ side began to dominate possession, with the Dons happy to surrender the ball and allow United to have their first forays forward into the attacking third. However, it took until the stroke of half-time for the away side to create their first clear-cut opportunity. Some neat footwork in midfield from Pawlett broke the hosts’ midfield press and created an overload on the right, with Liam Smith advancing from wing-back. The former found the latter and Smith whipped a dangerous ball across the face of goal which connected with the head of Ian Harkes, but the American failed to divert the pacey cross on target from 8-yards, spurning United’s best, and only chance of the first 45.

Just 5 minutes into the second half, the Reds delivered a knock-out blow that United would ultimately fail to recover from. Wide on the right, Ramsay received a pass into feet with Reynolds behind him. But rather than control the ball, he executed a superb dummy which left the United defender for dead as the ball rolled through his legs. The space this created gave the Dons full-back the time to deliver a pinpoint cross onto the head of the unmarked Christian Ramirez, who was left with the simplest of tasks to nod the ball past the despairing Siegrist from 6-yards to double the home side’s lead. With the hour mark fast approaching, Tam Courts changed the United shape with a double substitution, introducing Jeando Fuchs and Logan Chalmers for their first league minutes of the season, and withdrawing Mark Reynolds and Nicky Clark to make the switch to a 4-3-3. Siegrist was forced into action for the first time since the host’s second goal, with the rampaging MacKenzie finding space for a weak shot after some neat interplay between himself, Ojo and Hayes following the dispossession of Chalmers near the half-way line. A deflection off Edwards took the sting out of the youngster’s effort, making the United stopper’s first save of the afternoon a comfortable one United went in search of a route back into the game and almost clawed one back with 22 minutes remaining. An elongated one-two between Harkes and Pawlett saw the former released into space on the left of the Aberdeen 18-yard box, but Harkes’ low cross narrowly evaded the advancing Shankland at the far post. The game petered out in the latter stages with little intensity as both teams seemingly began to accept the result. United were again allowed most of the ball but failed to construct any meaningful attacks as Aberdeen mopped up any hopeful lobs forward towards an isolated Pawlett, now acting as a lone striker. The final chance for the men in white came one minute from time after MacLennan was adjudged to have challenged Liam Smith for an aerial ball unfairly, conceding a free kick wide on the right. Dead-ball specialist Mulgrew curled a dangerous cross into the area and MacKenzie headed towards his own goal, forcing Joe Lewis into his first and only meaningful save of the match. Referee Alan Muir’s whistle sounded after four minutes of injury time to conclude an uneventful second half and confirm a New Firm derby defeat for United, the first loss of the Tam Courts era.