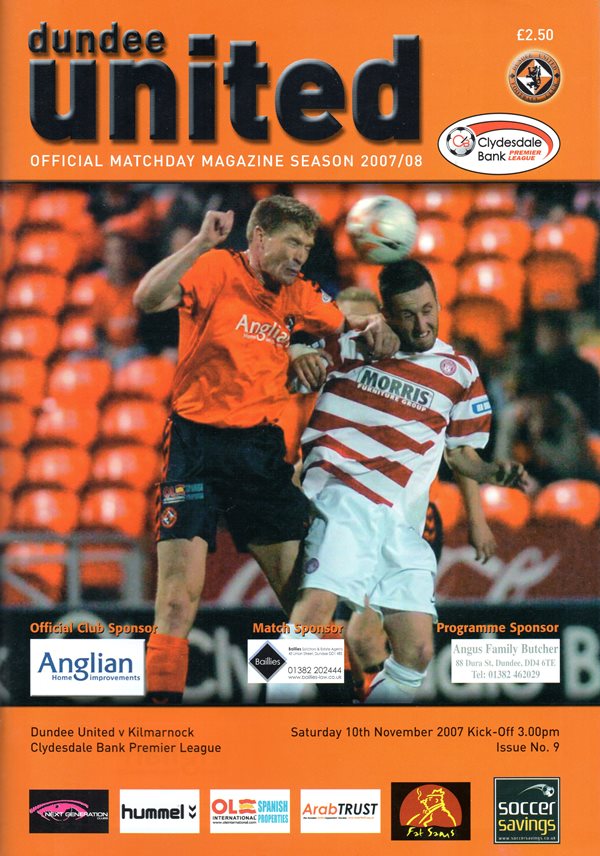 A tremendous performance of attacking football kept up United’s amazing run of results at Tannadice this afternoon. Killie were out-fought, out-thought and thoroughly out-played. With Wilkie and Robson suspended, and Flood dropping onto the bench with a slight injury concern, manager Levein was forced to make changes. Daly, Kerr and Kenneth were excellent replacements – giving the manager a real selection headache when he has a full squad to choose from.

United got off to a storming start and were a goal to the good after only eight minutes. Garry Kenneth’s long throw was flicked on by Dods for Hunt to control and drive home on the turn from six yards. The second should have followed five minutes later but Robertson missed from close range when it looked easier to score. United were absolutely dominant in midfield and Gomis took advantage with a run and shot from 30 yards, forcing Combe into a diving save low to his left.

For a brief period it looked like Killie had weathered the storm and might play their way into the match, but Szamotulski was never troubled in the United goal. The home side finished the half strongly and a Darren Dods header on 36 minutes seemed certain to find the back of the net – but somehow bounced over. Three minutes later, another tremendous run and cross from Gomis almost set up Daly, but brave goalkeeping by Combe denied the Irishman a come-back goal. Almost the perfect first half from United – only the killer second goal was missing.

Inevitably Killie began the second half in more determined fashion. A driven free-kick from Ian Flannigan found Invincible at the near post, and his deflected header was only just the wrong side of the bar. A Ryan O’Leary header was then momentarily fumbled by Szamotulski, but the keeper recovered well under pressure. United were soon back in charge of the match. Combe made another fine save low to his left to stop Hunt’s 30 yard free-kick after 51 minutes. Soon after the long throw almost paid dividends again but Robertson’s turn and shot was well blocked. Strong penalty appeals were then waved a way by the referee as Daly seemed to be wrestled to the ground.

With just under twenty minutes left, Killie had completely reshaped their midfield and attack using all three substitutes, and with only one goal in it, they began to press forward. Ford was not far off with a header, then Wales’s powerful shot across goal was superbly saved by Szamotulski, and a thirty yard drive from Rhian Dodds whistled just past the keeper’s left hand post.

With six minutes left, another tremendous run forward from Buaben drew a foul from O’Leary in the penalty box – a stonewall penalty, correctly awarded. Combe got needlessly involved, rushing from his line and Robertson seemed to react with a head-butt. But while Robertson received his marching orders, some questions might be asked about how O’Leary escaped without punishment after a professional foul, and Combe didn’t pick up his second yellow card. To infuriate Arabs even more, Combe then pulled off a fantastic save diving full-length to his left to palm Hunt’s penalty behind for a corner.

But ten-man United were not to be denied. After surviving one more scare, an injury time counter-attack saw Noel Hunt break free on the right of the box. He held the ball up and delivered the perfect cross for Buaben to side-foot into the net, and guarantee a thoroughly deserved three points for the home side.