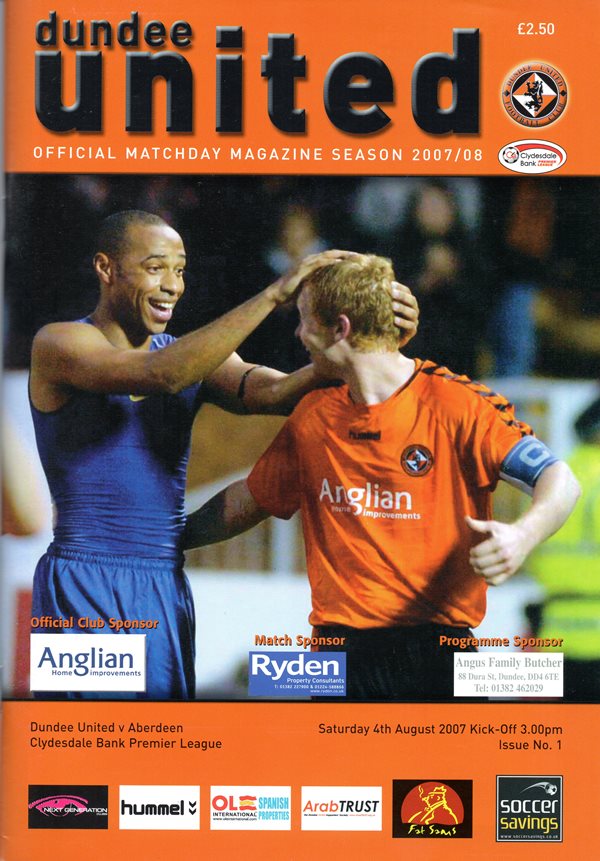 Boss Craig Levein handed competitive debuts to Grzegorz Szamotulski, Darren Dods and Willo Flood for the eagerly awaited curtain raiser at home to Aberdeen. Missing through suspension was Lee Wilkie giving Garry Kenneth a chance to make an impression with a starting place at centre back. With Mark Kerr nursing a calf injury David Robertson was chosen to partner Barry Robson and Morgaro Gomis in centre midfield while Steven Robb was preferred ahead of Craig Conway on the left flank, although the ex-Ayr winger was still listed on the bench. For Aberdeen there was a debut for ex-Celtic man Jackie McNamara in defence while fellow new boys, former Terror Lee Mair and Jeffrey De Visscher were named on the bench.

Although United forced a 4th minute corner and, shortly after, a couple of tempting crosses into the Aberdeen area, much of the early action was contained in midfield. For Aberdeen it took 15 minutes before a Lee Miller drive across the 6 yard box caused the first moment of panic in the home defence. Steven Robb was then withdrawn from the action through injury with Craig Conway coming on in his place. The visitors had an opportunity to test United with a free kick from long range and, after the initial drive from Scott Severin was blocked, Sean Dillon did well to hold off Andrew Considine as the ball broke for the Dons defender. The Tangerines had the best opportunity of the match to that point in 24 minutes, as Noel Hunt knocked down for David Robertson in the 6 yard box, but the midfielder’s headed flick towards goal was deflected for a corner. From the resulting set piece, Barry Robson forced Derek Soutar to turn the ball away from the top corner, with Hunt lurking ready to pounce. United’s 2nd corner in succession caused further confusion in the penalty area, with a Darren Dods poke towards goal at one point appearing to strike an Aberdeen hand. Soutar produced an outstanding save on the half hour mark, after a looping header from Robertson following a Conway cross was bound for the top corner. Flood then picked up a yellow card for impeding Jamie Smith in the centre circle as the visitors attempted a quick counter attack. With 36 minutes gone, Severin struck a weak free kick straight at Szamotulski, before another Conway cross was met by Robertson for United, though this time the header was well wide at the back post. The 42nd minute produced a moment of controversy when United loan signing Willo Flood was issued a second yellow card for an alleged dive outside the Aberdeen area. After initially doing well to break from midfield, the Irishman appeared to be clipped from behind however the referee, who had a very close view, viewed the incident worthy of another booking and the hosts were down to ten men. Moments later things almost went from bad to worse for United as Darren Mackie broke clear in the box, but Szamotulski reacted superbly to block the striker’s drive for a corner.

Despite being a man short, United had a chance early on when Hunt took time to cut in from the left channel and pick out the run of Dillon, who struck a powerful right foot drive which wasn’t far away from the top left corner. In the 50th minute Robertson cleverly cut inside Nicholson before shooting from long range, but unfortunately the connection wasn’t perfect and the effort drifted wide. Szamotulski then produced the save of the match in 52 minutes, when he acrobatically tipped a Barry Nicholson header onto the bar following a Michael Hart cross, with the ball seemingly destined for the net. Half time sub Steve Lovell then had plenty time and space at the edge of the United box, but thankfully for the home fans he rushed his effort and shot well wide. In an attempt to compete more in midfield, Levein then withdrew Conway and replaced him with summer capture Prince Buaben. United were containing their opponents well at this stage however the next piece of real action was a United attack which almost brought about the opening goal. Robson broke clear from midfield, held off his defender well before angling a low left foot drive towards the bottom corner. Painfully for United the ball rebounded off the inside of the post and away to safety, with Soutar beaten all ends up. Darren Dods then came close to making himself a Tangerine hero when he lunged at a deep Christian Kalvenes free kick, the big defender only coming within inches of converting at the back post. Hunt tried again for United with 7 minutes remaining, darting inside 2 defenders before shooting tamely at Soutar from the centre of the box. At the other end Dods was forced to slide in and block Lovell as he tried to make space for a shot inside the box, as both sides sensed at this stage a goal would win it. Robson was replaced by Stuart Duff with 2 minutes remaining, after the captain had picked up a leg knock. Then, as the stadium announcer declared the injury time to be played, there was ecstasy for the Terrors as David Robertson pounced to thrash the ball high into the net from close range after Hunt had cleverly lofted the ball into his path.

Manager's comments:
"I would have settled for a draw a half time, but we dug in and our fitness was fantastic. It needed to be since we were down to 10 men for 50 minutes. This issue (simulation) has been in the media spotlight and the referee was under pressure to act. He (Willo Flood) was unbalanced and it was not a dive. It wasn't anywhere near the penalty area and he was trying to get a shot away. That said, I am 100% behind stamping out cheating in the game."