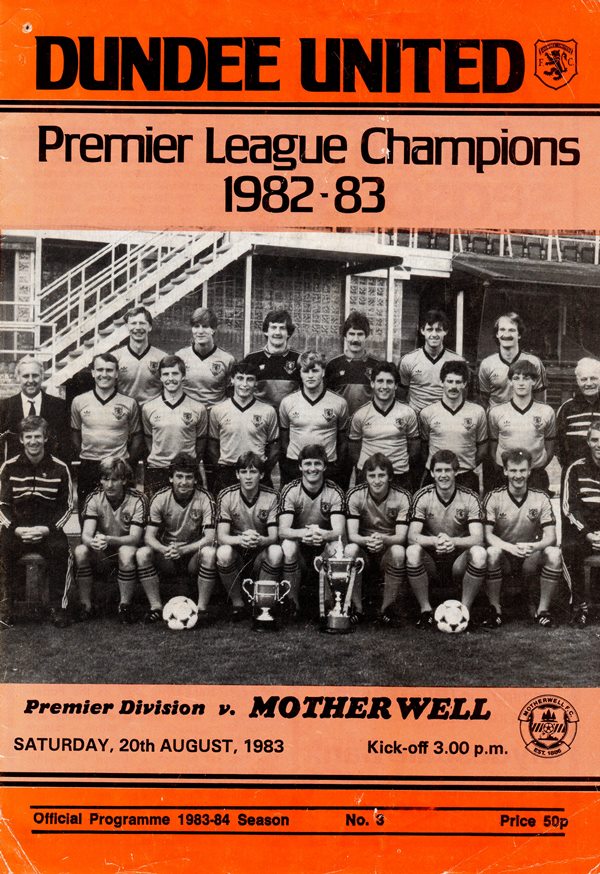 What a sight. On a perfect summer afternoon, four ball boys emerged from the players' tunnel, each with a corner of Dundee United's first ever championship flag. The tangerine and black saltire, paraded across the Tannadice pitch reminding fans, as if they would need it, that this season, United would begin it as defending champions. As the players were officially presented with the league trophy, there were fans who didn't think they would see the day drinking in every second, and those from the new breed, brought up on the success of recent seasons who probably think it will always be like this. With last season's success formally recognised, it was down to the business of opening the league campaign against Motherwell. After such an emotional pe-match high, would the players be able to carry that into the match? Paul Sturrock was the only regular from last season missing from Jim McLean's thirteen, injury keeping him out which gave Alex Taylor the chance to start only his second game for United.

Given this was a team that won the last five games of the season to claim the league title, no one should have been surprised they started this season with the same level of focus and application. United were dominant from kick off. Their movement and pace with the ball was too much for a Motherwell team who were now without their outstanding young talent Brian McClair who had been sold to Celtic in the summer. The first goal arrived in the twentieth minute when Taylor, who had impressed, crossed for Billy Kirkwood to head home. Motherwell managed to hold on until half-time, but in the second half, United would simply not be denied.

With Taylor orchestrating all of United's creative play, the lead was extended in the 49th minute from a familiar source, when skipper Paul Hegarty claimed his first of the season with a trademark header from the youngster's corner. Alex Taylor was clearly revelling in the day's atmosphere, and he claimed his first goal for United with a striker from the edge of the box that evaded the Motherwell 'keeper. The question was how many more United would get, and the answer came four minutes from time, when Billy Kirkwood got his second and the team's fourth with another header, ghosting in between defenders to head home a Ralph Milne flighted cross from the left.

It was a day that will live long in the memory of those present. The result and performance the perfect complement to the unveiling of the league flag. Of more immediate importance to Jim McLean will be the signal this sent to the rest of the league: Dundee United have no intention of giving up their grip on the premier league trophy just yet.

I think that like most of you, as you read through today's programme, you'll reflect on the happenings at Dens Park on the final day of the season. It certainly was the greatest day of my footbaTling career and our success must be especial'y pleasurable for the older United supporters who can recall United in the humbler surroundings of the Second Division. I, too, can remember coming to Tannadice as a player with Hamilton Accies and trying to get in the one bath in the visitors dressing room at Tannadice. The unfurling of the League flag ceremony before today's match is a measure of how far the club have progressed in the last quarter of a century. The two League Cup wins were important but it was a magnificent achievement to carry off the Premier title last year and that and today's ceremony will be events that are often recalled to our grand-children in years to come. No one can deny that the honour wasn't deserved. It must be somewhat unique for a side to win their first championship with a record points total, record goals and having equalled the record fewest defeats, the players deserve the highest accolade for their feats last season.

I make no apology for once again expressing my appreciation for your support. The League title was tangible reward for your efforts. However, I am still hopeful of increased support in the future even though I doubt if any set of supporters in Britain can have been entertained with such a consistently high level of football over the past two or three seasons and witnessed so many quality goals. For our part we will be striding to improve further, though as you'll appreciate this is becoming harder to achieve in view of our improving standards. These notes were written prior to 'Spurs visit on Wednesday night and I would suspect that. everyone here last Saturday, like myself, took considerable pleasure in our performance, especially in the second half. Our encounters with West Ham always seem to fulfil the pre-match expectation and this one was no exception. I would like to single out Billy Kirkwood who I felt had one his finest performances ever for the club. Obviously as we start out in the defence of our title it is vital that we get off on the right footing with a win over Motherwell who curiously provided the opposition in our final home match of last season. Jock Wallace's side will naturally be anxious to knock us off our pedestal, an opposition attitude we can expect in every match from now on.