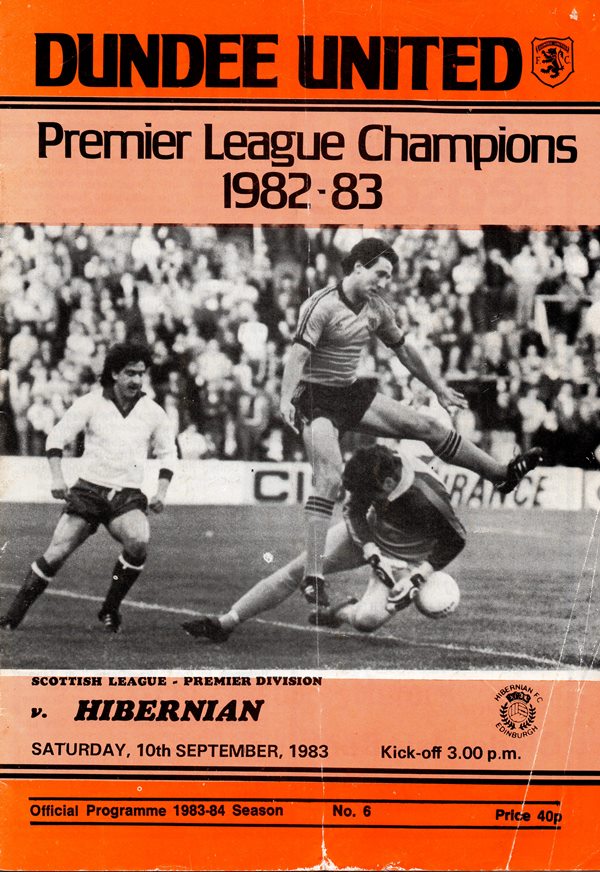 United were aiming to get back on the front foot in their league encounter against visitors Hibs, following the Tangerine's first mis-step of the season when they could only draw 1-1 away to first division Morton in the league cup on Wednesday. Jim McLean could also have been forgiven for having one eye on United’s forthcoming debut in the European Cup next Wednesday, but he kept faith with the forwards who had failed to find the net for the first time this season in Greenock, with youngster John Reilly continuing upfront alongside Davie Dodds. The only other change was Derek Stark coming in for Billy Kirkwood who dropped to the bench. Hibs have endured a torrid start to the season. They have lost both their opening league games and arrived at Tannadice off the back of a 5-1 defeat by Celtic at Parkhead in the midweek league cup group matches.

United wasted no time putting the Hibs defence under pressure. Within the first minute Eammon Bannon fired a speculative effort over the bar from the edge of the box. Moments later a classic United box-to-box attack saw Ralph Milne cut in from the right hand touchline to float a cross in for Dodds at the far post that was hooked clear by Alan Sneddon. From the resulting corner, Reilly found himself in space, but his volley was straight at ‘keeper Alan Rough. Dodds was next to threaten the Hibs goal when he beat his marker at the near post to Bannon’s cross, but could only head the ball just over the bar. The breakthrough would come in the 23rd minute after a period of sustained pressure. United were camped in the Hibs half, keeping possession, working the ball from the right wing to the left to try and create an opening. Hibs were simply unable to clear the ball out of their half and when Reilly beat Ally Brazil out on the left hand side and crossed the ball into the near post, Davie Dodds once again beat his marker, but this time flicked the ball up and over Rough into the net. United continued to dominate the visitors, and their pressure eventually resulted in a deserved second in the 42nd minute. A Richard Gough free kick wasn’t cleared and Paul Hegarty collected the loose ball in the box and his delicate cross picked out Davie Dodds whose movement evaded Brazil and Arthur Duncan and he headed past Rough from 5 yards out.

There was no sense of United easing off in the second half, and Dodds passed up a superb chance to claim his hat-trick when he glanced a free header past Rough’s right hand post. But the third duly arrived in the 67th minute when Bannon was set free down the left hand side and his cross to the far-post was headed home by Ralph Milne from more or less the goal line. A demoralised HIbs simply could not live with a rampant United. They were unable to cope with United’s constant harrying when they had the ball and United’s movement when they didn’t. Kirkwood replaced Maurice Malpas in the 77th minute and made an immediate impact. Once again United forced Hibs into turning over possession and attacked at pace. Milne threaded a weighted pass in behind the left back Sneddon which Billy Kirkwood ran onto and rolled his first time shot into Rough’s left hand corner from the edge of the box. United’s fifth and final goal with six minutes to go was textbookRalph Milne. Beating Willie Jamieson to the ball on the left touchline, he raced towards Rough’s goal, as the ‘keeper narrowed the angle, Milne calmly slotted it underneath him leaving the Shed in raptures.

This was as breathless and high octane a performance as one will see from any side in the premier league this season. United were simply relentless, as if affronted by their failure to win last Wednesday. Thoughts now turn to the club’s next major step forward in the European Cup, and they do so, very much, on the front foot.

Two wins, eight goals for and just one conceded is the healthy state of our Premier account after our two outings to date. I, honestly, couldn't have wished for a more satisfactory start to the defence of our title. Last week at Dens Park we continued our sequence of good results in derby clashes. However, even in victory, I felt we afforded Dundee the possibility of taking something from the match in the early stages. Their players' attitude is obviously one of desperation to bring to an end our run of successes, without us assisting them by playing too far below our potential. I just hope we never find ourselves in the same boat at some future date. Perhaps one of the most heartening features of the Dundee match was the performance of John Reilly. He followed up his two goals against Alloa with a repeat act at Dens Park. This will indeed be a vital season for John and, hopefully, the one in which he will prove a genuine candidate for a first team place. However, he must work hard to improve his ball control, thereby enhancing his link up with the rest of the side, and his first team prospects.

Our opening to the season has, I think, dispelled the myth that we are a one-mqp team. Up until a year ago we rarely achieved the important result Without Paul Sturrock in the ranks. However, our fine start to the season has, hopefully, made the players themselves realise we are no longer a one-man band. Nonetheless Paul's eventual return will be no less welcome as his experience will be an important factor in the battles that lie ahead. On Wednesday evening we travelled to Greenock where our approach at the start of that tie was a disgrace, something which cannot be tolerated at Tannadice these days. No matter how good our previous performances may have been, you are only as good as your last game. After playing sides of lesser quality at home, the players failed to show the necessary fight or determination away from home in front of a small crowd. Consequently, the point we took from Cappielow was no more than our overall display merited. Some of the players could well be believing too much of what they read in the Press, thereby thinking they have played better than they really have. An example of this is Billy Kirkwood, whose form since his display against West Ham has been a disappointment. Hibs' visit this afternoon sees a return of Premier action and consequently our attitude must be right from the first whistle if we are to secure both points. When Pat Stanton's side were here last March they recovered from a two-goal interval deficit to earn a point, and that should serve as a timely reminder ol the task that lies ahead in the ensuing ninety minutes.