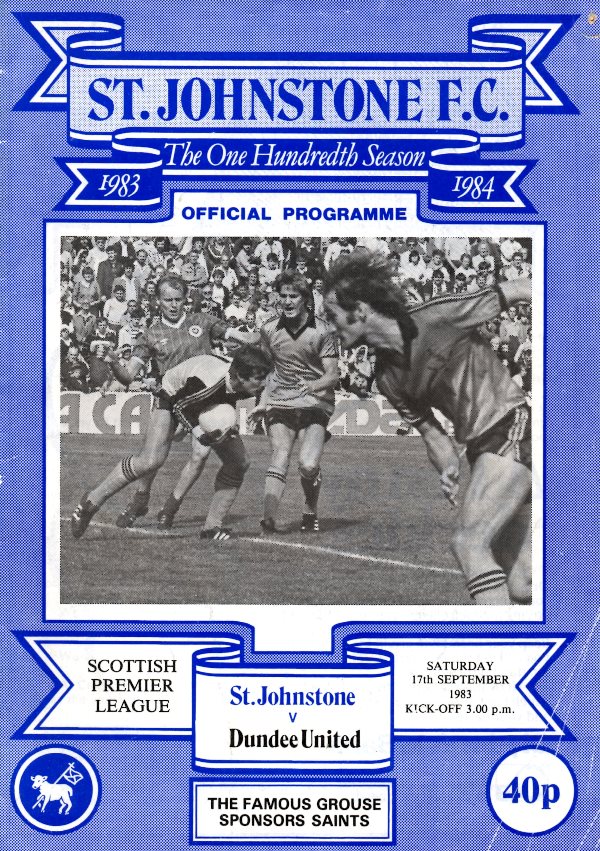 There could not be a greater contrast between two sides in the premier league this weekend than St Johnstone, who have yet to win a match on their return to top flight football, and their guests, Dundee United, who have won all three of their league games, scoring an astonishing 13 goals in the process. The Perth side’s opening run of fixtures have been cruel. After losing 1-0 to Hearts on the opening day of the season, they then conceded five goals to Aberdeen and Celtic in consecutive league matches. Having faced last season’s third placed finishers and runners-up, they were now up against the reigning champions. Surely another over-worked afternoon lay in store for ‘keeper Mike McDonald?

United started with the same side that had defeated Hamrun Spartans in the first leg of the European Cup on Wednesday, and one could only presume that their efforts, on the dry, hard Maltese pitch, resulted in their lethargic first half performance. United were unable to break down a St Johnstone side that was incredibly well organised and disciplined at the back. Neither Eammon Bannon nor Ralph Milne were able to find the sort of space they enjoyed the week before against Hibs. Whilst the Saints relied on the experience of John Brogan to keep the United back line occupied.

The second half saw United up the tempo and in the 47th minute Davie Dodds claimed his eighth goal of the season when he was quickest to seize upon the sort of indecision in the home defence that has undone a lot of their good play this early on in the season, and prod the ball home inside the box. However, St Johnstone were not ready to give up, and with Brogan in the vanguard, they continued to push for a way back into the game and were rewarded on the hour mark when Paul Hegarty fouled Drew Rutherford in the box and Jim Morton converted the penalty for a deserved equaliser. But parity remained for only seven minutes. Jim McLean brought on Alex Taylor for John Reilly, and the youngster’s guile brought immediate rewards, as he was able to free Milne down the right for one of the first times in the match, and his subsequent cross was headed home by John Holt for what proved to be the winner.

The manner of the victory was not what many would have predicted beforehand, and perhaps it is one of the first matches this season where the absence of Paul Sturrock and his creativity was keenly felt. Jim McLean himself acknowledged as much afterwards, but the win still preserved United’s perfect start to their league campaign. Further good news would then arrive in the form of Davie Dodds’s first call up to Jock Stein’s Scotland squad for the friendly against Uruguay on Wednesday night. Dodds replaces the injured Charlie Nicholas and will join team mate Richard Gough when they meet up on Sunday.