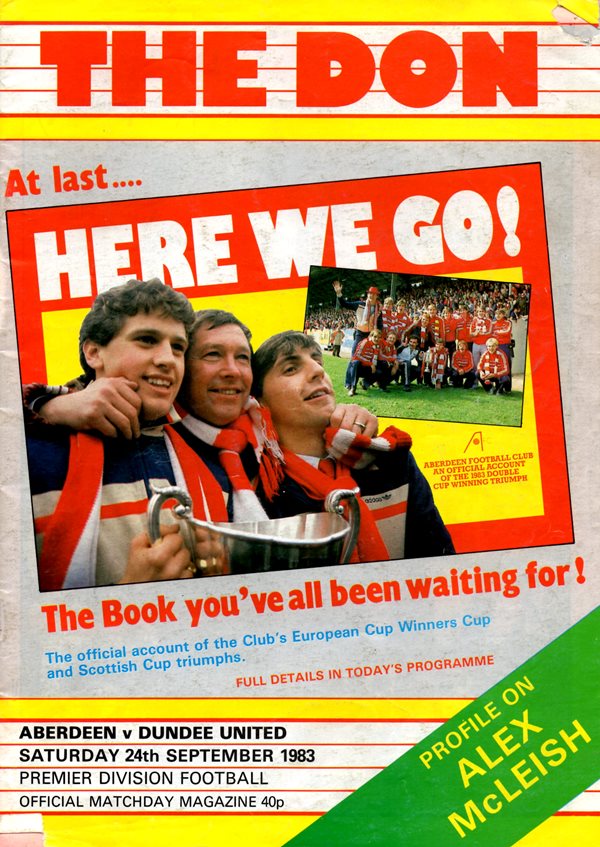 Not only was this Scotland’s game of the day, it was probably the most eagerly anticipated fixture of the season so far, even with the first Old Firm derby of the season having been played at the start of the month. League leaders United travelled to second placed Aberdeen for the first clash between the sides many observers expect to be competing for the title in May. After a handful of games, this was the first serious examination of both sides’ title credentials. United have started in imperious form, with an avalanche of goals, despite the absence of Paul Sturrock, who was still not fit enough to take part in today’s encounter. Aberdeen are just one point behind, following a comfortable 2-0 victory over a deeply troubled Rangers side last weekend at Ibrox. Gordon Strachan was fit enough to be on the bench for the hosts whilst United brought Maurice Malpas into the starting line-up at the expense of John Reilly. This was the first time this season manager Jim McLean played neither Reilly nor Alex Taylor for Sturrock. Instead, McLean opted for a more muscular approach, pairing Billy Kirkwood with Davie Dodds. Joining Taylor on the bench for the first time since ending last season on loan at Morton, was Graeme Payne.

Aberdeen started the match trying to utilise Peter Weir’s wing play down the United right hand side, and in the opening minutes, Weir swayed past Richard Gough and saw his effort from the edge of the box come off the outside of Hamish McAlpine’s right hand post. United’s first serious foray into the Aberdeen half saw Kirkwood get booked when following an Eammon Bannon through ball, he barged into Scotland goalkeeper Jim Leighton, as a gentle reminder that nothing in this match would be uncontested. Krikwood was presented with a more legitimate chance when a Bannon cross from the byline fell to him, ten yards out, but he could only prod at the ball and it was deflected away for a corner. The fine margins at play were best demonstrated when Steve Cowan headed over from just six yards out from a Neale Cooper free kick that had drifted over Paul Hegarty’s head. In the 36th minute, Malpas broke down the Aberdeen right-hand side firing in a cross that was cleared by Doug Rougvie, but only as far as Eamonn Bannon who was loitering at the edge of the box, and on the half-volley he sweetly caught the ball on the outside of his left boot, and fired it into the net, moving away from Leighton’s full length dive. Rougvie had a chance to draw Aberdeen level right on half time, when a Mark McGhee cross fell to the defender inside the United box, unmarked, but leaning back, his effort sailed over the bar when he should have at least worked McAlpine.

At the start of the second half, Aberdeen once again were ruing their profligacy in front goal. McGhee beat the United offside trap to get in behind Dave Narey and Malpas, but he screwed his effort well wide of the right hand post. Then in the 48th minute, Aberdeen earned a penalty. McGhee picked up a header with his back to goal in the United box, as he attempted to turn Narey, the centre back went to ground for the tackle but took McGhee’s legs, for which he was booked. But in keeping with their efforts at goal, John McMaster’s penalty disappeared into the far reaches of the home end, again failing to test McAlpine. The hosts were made to pay in the 56th minute when Ralph Milne worked a lovely one-two with Dodds on the edge of the Aberdeen box, and his burst pulled Miller out of position to meet him. Milne smartly cut the ball back to the edge of the six yard box where Billy Kirkwood beat McLeish to steer it beyond Leighton for his fourth goal of the season. Aberdeen finally found a way into the game in the 78th minute when substitute John Hewitt was awarded a penalty for obstruction, when Narey blocked his run into the box. This time Gordon Strachan fired the penalty past McAlpine into the roof of the net. Aberdeen pressurised the visitors for the last ten minutes, but only created one chance of note, when Rougvie could only divert a Strachan shot into the arms of McAlpine.

Nobody was surprised by how tight an affair this was, which came down to United being able to take their chances, whilst Aberdeen spurned theirs. This season is still in its infancy, but today’s match suggested that the destination of the title will be decided by the smallest of margins between the two sides who right now, are unquestionably the country’s best.