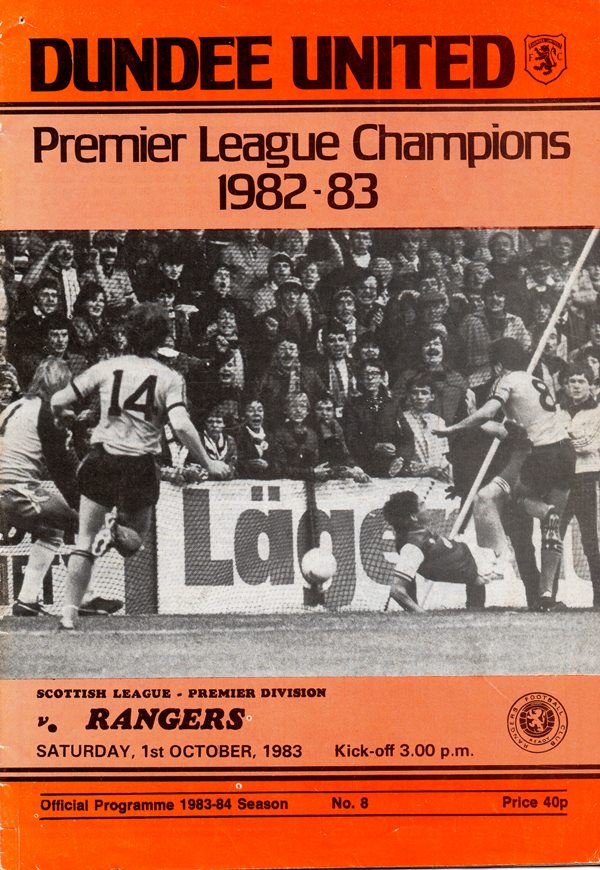 Tannadice welcomed its largest crowd of the season so far as nearly 17,000 came to see whether United could extend their perfect start to the league season to a club record sixth consecutive win, or if Rangers, whose league form has been causing more than just grumbling amongst their support, would back up their first league win of the season against St Johnstone, with a positive result against the league leaders. United’s line-up had required some late alterations from Jim McLean, as Paul Sturrock, who played his first game of the season against Hamrun Spartans in the European Cup on Wednesday was not considered fit enough for the match day squad. But of greater concern was the enforced absence of Ralph Milne with tonsillitis. Alex Taylor was brought back into the starting eleven to wear his number eight shirt, with Billy Kirkwood continuing in the advanced position he took up against Aberdeen. Rangers made several changes from the team that defeated Valletta in the Cup Winners Cup, 10-0, most notably, Sandy Clark and Ally McCoist would be up front at the expense of John McDonald and David Mitchell who had scored five between them on Wednesday night.

Despite the significant change to United's forward line, the home side created the first opportunity when an Eammon Bannon free kick from the right was met by an unmarked John Holt on the edge of the box, but the midfielder could not get enough power on his header to trouble Peter McCloy who easily collected the effort. But thereafter, United visits to the Rangers box were very much few and far between as they struggled to impose themselves on the match and in the 12th minute after some sustained pressure, Rangers took the lead, thanks to some uncharacteristically indecisive United defending. Ian Redford on the Rangers left crossed the ball to the opposite flank where Dave MacKinnon collected and immediately played an inswinging cross to the edge of the six yard box. McCoist jostled with Paul Hegarty for the cross whilst Hamish McAlpine left his line, but not with any conviction. The ball appeared to bounce off Hegarty and the United 'keeper, who failed to attack the ball or clear the players out of his road, could only watch it loop into his net.

This was the first time in the league campaign that United had been behind, and it did not spark the sort of response the home fans would have hoped for. Rangers should have had a second when a corner from the left by Davie Cooper, was met by Clark on the edge of the six yard box, beating a static Dave Narey to the ball, but his bulleted header was headed off the line by Maurice Malpas and cleared away by Davie Dodds.

Rangers were playing with a determination that was missing from United's play. Their midfield was winning the 50-50 battles and their forward play was full of a bustle and enthusiasm that the United defence were struggling to find an answer to. On top of this, Davie Cooper was enjoying his afternoon, giving Richard Gough easily his most difficult day at work this season. So much so, midway through the first half Jim McLean swapped his full backs with Malpas coming into right back and Gough switching across to the left. The difference was minimal. Cooper set up Iain Redford for the next real attempt on goal. The winger touched the ball inside for Reford running onto the ball from 25 yards out, and he struck it sweetly, but his low drive drifted past McAlpine's left post. From another corner Rangers came close again, when Craig Paterson won his header against Hegarty, with Bannon blocking on the line, and McCoist reacted to the rebound, but could not get his body shape right and scuffed the ball wide. A second Rangers goal was an inevitability, and it arrived in the 39th minute, with all the elements that had blighted this United performance. Alex Taylor was muscled off the ball in midfield by substitute Bobby Russell who freed Cooper to cross into the box, where a corner was conceded. Again, McAlpine came out for the corner with no real conviction, the ball sailed over his head, where McCoist headed it back into the danger zone, Sandy Clark flicked the ball goalward for Malpas to clear off the line, but the ball was driven back in where Clark reacted quickest of all to prod it into the net. The lead should have been further extended just before half-time, when McCoist broke through the United midfield to play in Russell who beat the offside trap, his cross to the far post deflected off Bannon and dropped onto the bar and out. It would be difficult to think of a more abysmal forty-five minutes of football from United this calendar year.

United brought on Graeme Payne for Taylor four minutes into the second half, and United created its first chance when Bannon's shot from the edge of the box went wide. Moments later a cross from Bannon on the left was left by Peter McCloy but swerved onto the top of the bar before bouncing out. Whilst United were having more of the ball, Rangers were keeping them comfortably at arms length, and continued to snap into tackles, turning over possession and creating meaningful chances. Cooper, again, delivered a delicious ball into the box that McCoist just failed to connect to, and then from a Cooper corner, McCoist swivelled and fired in a shot that McAlpine did well to smother. Redford again came close, when driving in from the Rangers left, his curling shot drifted just over the bar.

The full-time whistle was a relief to the United faithful. It has been a long time since a United team has been so utterly dominated at home. The defence appeared uncertain throughout and the midfield was simply unable to contain the visitors. At no point did it look like United could find a way back into the match. Suffering their first defeat in all competitions since a 2-0 defeat to Celtic in April, is no reason to panic, but United must rediscover their competitive instinct at home to Motherwell in the League Cup on Wednesday before new league leaders, Celtic, visit next Saturday on league business.

Sorry to disappoint all you fans who enjoy Jim McLean's article in the match programme. This is a concerted effort from all the Directors EXCEPT Jim McLean. Those of you who take the Sunday Mail would have read the vicious attack on Jim by a Mr Don Morrison in the issue of 11th September after a Mail reporter was banned at the after-match conference the previous day. Unforunately, the Sunday Mail do not give us the right of a full and fair reply so this is our only means of cornmunication. For example, on 5th June Mr Morrison reviled us for seeking interest from Hearts on the unpaid balance of the transfer fees for Willie Pettigrew and Derek Addison almost two years previously. We wrote the editor, pointing out that Hearts had written us on 20th January, 1982, stating, "Heart of Midlothian will pay interest at the current rate on the outstanding debt." The editor stated he was willing to publish a letter making this point. Instead only an extract was published by Mr Morrison with a facetious footnote. Then, on 21st August, Mr Morrison referred to the large turnout for Hamish McAlpine's testimonial and included the following remark about Hamish. "Not only has he been a United stalwart for 17 years but has had to put up with Jim McLean for 12 of them. I reckon that's going beyond the call of duty." Mr Morrison, in his scathing attack on Jim in his article of 11th September, says that he jocularly remarked Hamish McAlpine deserved his bumper testimonial because he had put up with Jim for so long. What a sick type of humour! He also says in this article Jim cannot take criticism. The other Directors refute this. He can take criticism provided it is constructive and fair but wlien Mr Morrison criticises what players have been signed this is sheer arrogance. He is not even accurate in his statements.

The trouble about telling a lie is you must remember afterwards what the lie was. He had earlier castigated us for demanding interest from Hearts. He now says we had demanded speedy payment of interest from Hearts. Some difference. Incidentally the interest is still unpaid. Our supporters obviously support Jim's latest action in banning the Sunday Mail reporter as extracts on page 13 from one or two of the many letters received show. Mr McLean's fellow Directors are 100% in agreement with his action as, in fact, are the players, especially, as we have reason to believe the situation was set up by the Mail. It seems to be a particularly stupid action on their part as we had arranged to meet their sports editor and Mr Morrison on the 22nd of this month to try and remedy the situation. This meeting has, of course, been cancelled in view of Mr Morrison's aggravation of the situation. Mr Morrison is banned from Tannadice and the Mail refused contact with anyone connected with Tannadice until Mr Morrison apologises. If you believe he will. you will believe anything.