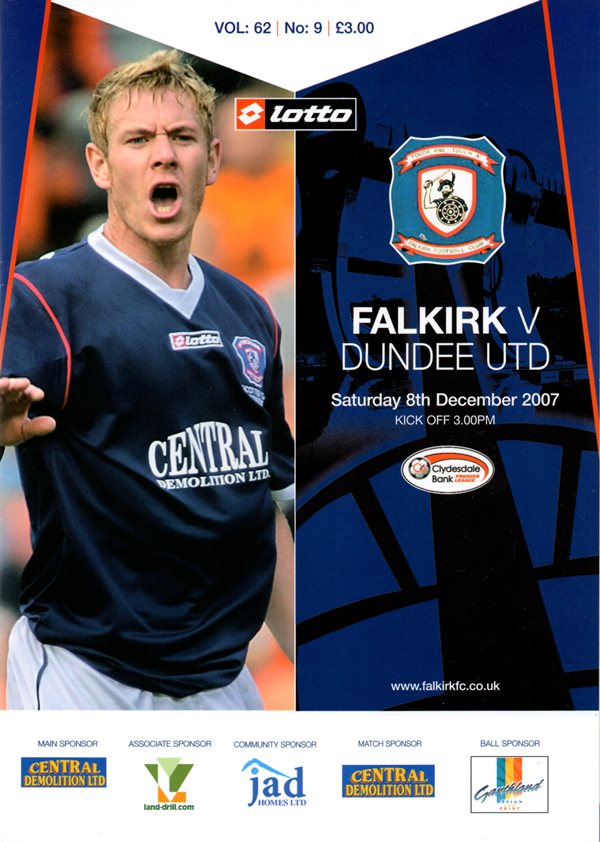 In dreadful conditions at the Falkirk stadium, United suffered a second successive league defeat for the first time this season. Dillon, Hunt, Robson and Duff were all brought into the starting line-up, in place of David Robertson, Cameron, Kenneth and Robb, following the home loss to Caley. But it was an unchanged Falkirk side – on a high after a 5 v 1 win at St Mirren – that looked marginally more at home in the wind, sleet and freezing cold.

The hosts were gifted a fifth minute lead when United’s off-side trap failed miserably, allowing in-form Pedro Moutinho to latch onto a long hopeful ball and poke the ball into the net through Szamotulski’s legs. Falkirk took confidence from the early goal and only a fine last ditch tackle from Wilkie stopped Arfield going through on the keeper on 20 minutes, with Higdon’s follow up header dropping wide. United’s off-side trap failed again on 23 minutes giving Darren Barr the opportunity to volley at goal from 16 yards, Szamotulski saving well.

United should have been level just two minutes later, but Sean Dillon headed Robson’s corner over from only three yards. If that was a bad miss, it was plain bad luck that denied Mark Kerr soon after – a fine 30 yard strike rebounding back off the face of the cross-bar with Krul well beaten. Krul did well to tip a 25 yard Gomis shot round the post, but the Dutch keeper then needed some good fortune when his clearance rebounded straight off Flood and out for a goal kick. Against the run of play Falkirk grabbed a second just four minutes before half time – Graeme Barrett powering home Higdon’s low cut-back at the front post. United were perhaps unfortunate to be two goals down at half time – but only with themselves to blame for some slack defending.

Things could have got worse straight after half time with Moutinho going close twice. United weathered that storm and were soon back searching for a way back into the game. With the hour mark approaching Noel Hunt came within inches of heading Flood’s cross into the net. An even better chance followed moments later when the Irish striker picked up on a loose back pass from Thomson – but his attempted chip over the keeper was well saved. Another fine Flood cross was headed wide from 6 yards by Barry Robson, when Noel Hunt was perhaps better placed to finish.

United were made to rue these missed opportunities as Falkirk grabbed a third on 66 minutes, Michael Higdon heading home at the back post from Barrett’s cross. With Falkirk now enjoying a comfortable lead, they could afford to go chasing a fourth. Young Scott Arfield sent one good chance wide, and another too close to Szamotulski, and the Pole then did well to save a Barrett header.

United never let the heads go down, and Hunt forced Krul into another save with a powerful shot from 15 yards. But although 3 v 0 flattered the hosts, sharper finishing and more solid defending meant the home side deserved the three points. And while the game was far from error-free, credit to both sides for producing a decent game in some of the worst conditions possible.