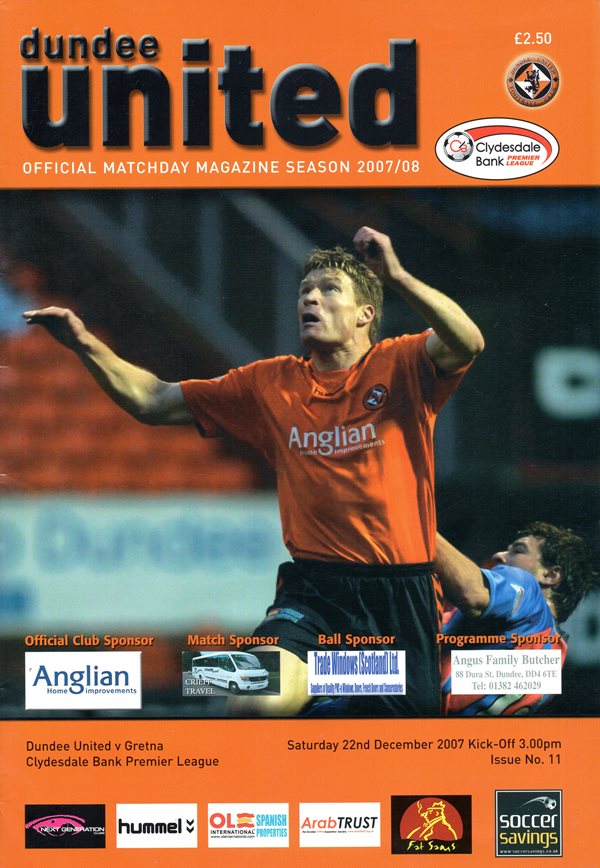 After an early gift for Kenny Deuchar inside twelve minutes, United managed to get themselves back in the game through a Noel Hunt header shortly before the half hour. Despite United looking to be in the ascendancy and the more likely to build a lead, Nicky Deverdics capitalised on another defensive lapse to score what proved to be the winner just before half time.

Craig Levein named an unchanged line-up, while Davie Irons made three changes to the Gretna side. Goalkeeper Greg Fleming was dropped in favour of Tony Caig, while Fabian Yantorno and Nicky Deverdics came in for Alan Jenkins and Martin Grainger.

Gretna opened the scoring after eleven minutes, and it was a shocker for United to conceed. Stuart Duff put Euan McLean under pressure with a pass back which the goalkeeper controlled, but was unable to clear before he was closed down by Deuchar, who nicked the ball away and tapped into the empty net.

The infamous ‘good Doctor’ had given Gretna an early tonic, but United’s reaction was a positive one. Noel Hunt was fouled during a surging run midway through the half, but to the striker’s frustration, referee Charlie Richmond ruled that the offence was just outside the penalty area. Barry Robson struck the resultant free kick powerfully, but the ball deflected off the defensive wall and away from danger.

United drew level five minutes later. Sean Dillon picked up the ball on the right flank, and as he checked inside, he ignored the easy option of a square pass to Morgaro Gomis, and instead put in an inviting left foot cross. Hunt lost his marker, and glanced a header into the bottom corner.

Hunt and Robson shot off target from long range before, Flood put in a dangerous cross which eventually fell for Robson who shot over the bar on the stretch from twelve yards.

With five minutes of the first half remaining, Garry Kenneth’s mazy run ended with a shot which deflected towards Hunt, whose effort was parried by Caig; David Robertson firing the rebound wide.

Just as United looked the more likely to go in front, however, Gretna pitched in with the sucker punch. From a Horwood throw-in, Makinwa touched the ball to Skelton, who crossed to the far post. Deuchar was always favourite to win the header above the challenge of Duff, and as the ball went across the face of goal, Nicky Deverdics was the one who reacted to turn the ball into the net.

After a brief flurry forward by Gretna in the first couple of minutes after the break, United were on the front foot for virtually the remainder of the game.

Caig looked very uncertain underneath the bar as Robson put in inswinging corners from the right, but unfortunately he was not tested often enough. Aurrelien Collin took the full force of a Robson shot following a neat rehearsed move from a throw-in which featured Dillon, Buaben and Robson.

Craig Levein brought on Jordan Robertson and Craig Conway as United looked for the creative spark to find a clear-cut chance to equalise, and they almost did so with a quarter of an hour remaining. Conway’s cross from the left was spilled by Caig. The ball dropped Robson, who side stepped a defender before meekly pulling his shot into the side netting.

At the death, a Conway free kick provided United with their final chance to equalise. Garry Kenneth was caught on his heels and couldn’t meet the inswinger, and the ball dropped wide of the target.