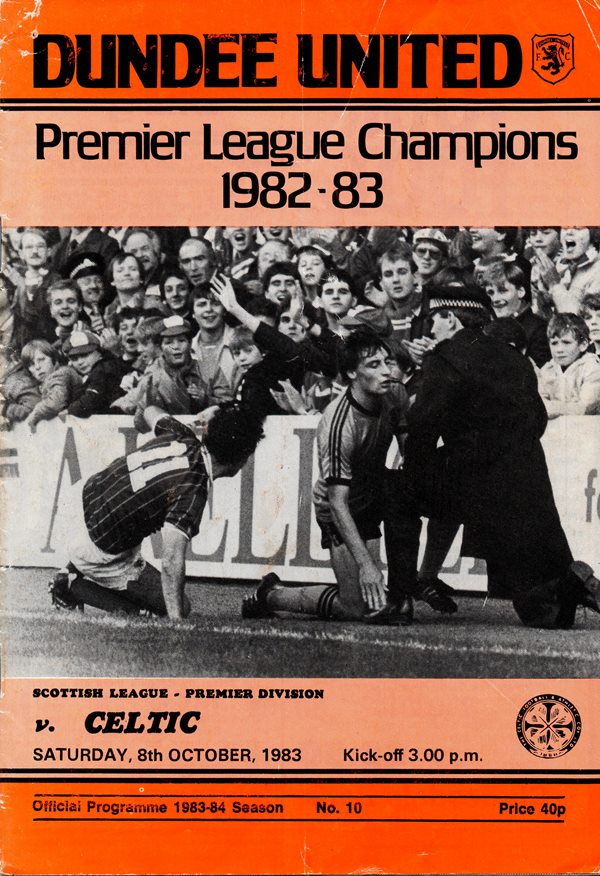 For the first time since April 23rd last season, United prepared to take to the field not at the top of the league following their defeat to Rangers last weekend. New leaders Celtic were the guests at Tannadice in the country’s game of the day, and a win would enable the Tangerines to reclaim first position. Jim McLean was still without Paul Sturrock who has yet to make an appearance in the league due to injury and Alex Taylor was also out with a hamstring problem. Ralph Milne, who’s absence against Rangers so blunted United’s attacking threat kept his place in the team after coming through the mid-week League Cup tie against Motherwell, and John Reilly, who scored in the same match, started up front.

United started aggressively, in marked contrast to the previous weekend, and John Holt had the first chance of the match when Milne teed him up at the edge of the box for a drive that drifted past Pat Bonner’s right hand post. Celtic responded with a typically fluent move. Paul McStay released Danny McGrain in behind Richard Gough and the veteran picked out McStay who had drifted into space inside the box, but the youngster dragged his effort past McAlpine’s right, despite being under no pressure. Opportunities for both sides were at a premium. The creative outlets for both sides, Milne, Eammon Bannon, McStay and Tommy Burns could not find any space and both sides were reduced to rather aimless, longer passes into well marshalled defences. Finally in the 28th minute, United took the lead and there was a slice of good fortune to it. Reilly was fouled on the edge of the box when he outwitted Roy Aitken with some lovely footwork and from the subsequent free kick, Davie Narey quickly knocked the ball square to Billy Kirkwood who struck the ball first time from 20 yards out where a deflection off Murdo MacLeod took the ball past Bonner. This was Kirkwood’s sixth goal of the season, but it did not change the scrappy nature of the first half where the ball continued to be battled for in the midfield. Burns had probably the best chance of the first half, typically it came from some loose play, and the Celtic midfielder picked up possession on the edge of the box finding a yard of space and shot on the turn, forcing McAlpine to parry the ball out to his right. MacLeod chipped the ball back across goal, but Holt was able to clear under pressure from Jim Melrose.

The second half followed a similar pattern, with the discipline and commitment of both midfields and defence setting the tone. Jim Melrose managed to find himself in some rare Tannadice space, but as he prepared to shoot from inside the box, Kirkwood slid into make the critical block and Melrose then sent the rebound well wide. Dodds should then have extended United’s lead when a Narey tackle saw the ball drift beyond the Celtic defence into his path. Unmarked, Dodds then took a touch, but at no point did the United striker give the impression of believing he would score and his effort was easily blocked by Bonner. Reilly then fired in a rebound that was cleared by Brian Whittaker. Celtic responded moments later, when MacLeod played a free kick to McStay who from 25 yards hit a tremendous drive through a ruck of players that McAlpine did extremely well to get down low to his right to save, but he could not hold the ball and as Frank McGarvey ran in for the rebound, McAlpine appeared to clip the striker, but despite the screams from Celtic players and fans the referee waved away claims for a penalty. United made the most of the reprieve. Reilly was fouled by Graeme Sinclair on the left touchline, and Bannon’s driven free kick was directed in superbly by Richard Gough, who headed the ball up and over Bonner’s left for his sixth of the season. As the clock ticked down, Celtic applied concerted pressure on the United goal and in the 84th minute Jim Melrose pulled one back. Sinclair crossed the ball in from the left and Melrose was unmarked from 8 yards to guide his header into McAlpine’s right corner. Tom McAdam had the best chance to equalise from a McGarvey cross, but his header was easily claimed by McAlpine and United were able to see out the remaining minutes for the two points.

McLean admitted that the game had failed to live up to expectations calling it “one of the most disappointing matches…between the clubs for a long time.” The win did not come with the relentless attacking football that has been their trademark for most of this season, and whilst McLean may have lamented the lack of skill, he would not have been displeased by the endeavour shown by every member of his team from front to back. The determination shown to hold onto the win and get back to the top of the league after one week interlude should give their challengers pause for thought.

Following our home defeat by Rangers, today's clash with Celtic assumes, if that were possible, even greater importance, as we cannot risk dropping further points, especially to the sides we hope to be challenging for the title. Any side fighting relegation regard it as essential they beat their fellow strugglers, and that same maxim applies to top of the table tussles. For us, these 4-pointers come with the meetings against Aberdeen, Celtic and Rangers. Our confrontations with Celtic always seem to produce highly attractive and exciting games. In their pool are some exceptionally skilled players and even though the loss of Charlie Nicholas will be a difficult gap to plug Celtic have acquired two quality players in Brian McClair and Jim Melrose. In ten days' time we embark on another European adventure and I think I can promise you a treat when Standard Liege visit us for the return leg. They have all the necessary qualities to be regarded as one of Europe's top sides, being highly experienced with, literally, internationals in every department. I anticipate an extremely difficult tie and nothing but our best over both legs will do. However, I believe it is within our capabilities to qualify for the last eight.

The next match at Tannadice is the Under 21 International. It is thanks to the increased support that we have received over the past two or three seasons that this match is being played here. If any matches of this type are to be played here in the future then much will depend on the size of the crowd and the atmosphere on Tuesday evening. It is essential, therefore, that as many as possible of you turn up to support the Under 21 team which, we hope, will include a number of players from our own ranks.