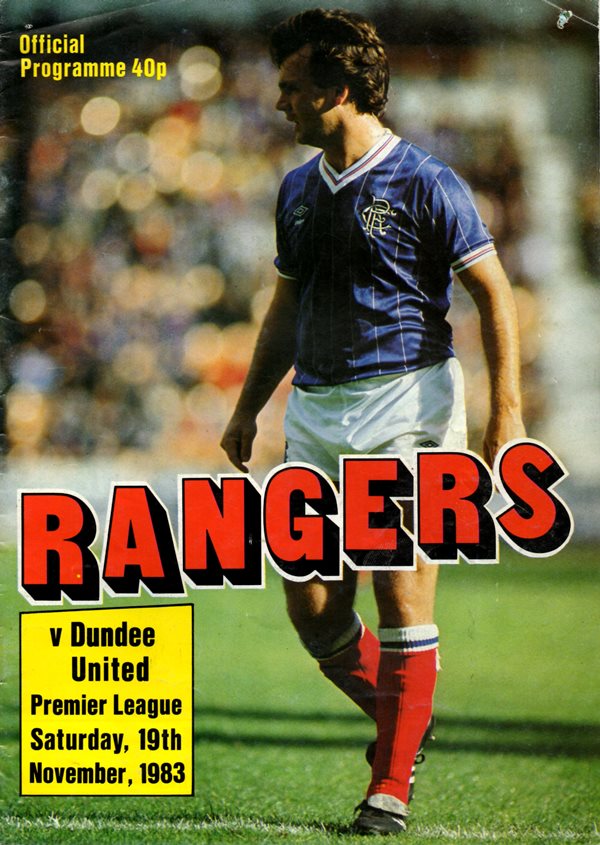 It would have been fascinating to be privy to the thoughts of Jim McLean at about 2:55pm at Ibrox. As the United manager shuffled his substitutes and coaching staff along the dug out so he could take his seat, what did he think as he looked across the players tunnel, to Jock Wallace taking the acclaim of the home fans? You certainly wouldn’t have been able to guess by looking at the United manager. This was Wallace’s first match since being confirmed as the new Rangers manager, and there was certainly an air of expectation and excitement from the home fans that has been absent so far this season. For United, this was about rebuilding league momentum that had stalled in recent weeks. Following the 7-0 win at home to St Johnstone last week, McLean picked the same eleven, including Maurice Malpas, freshly graduated with his degree in Electrical Engineering on Friday. United have proved themselves to have no fear of any venue in recent years, but that confidence seems to recede when presented with the grand sandstone front of Ibrox. United have only won once in their last thirteen visits to Govan and in truth never looked like changing that today.

United did start brightly and new signing Tommy Coyne came close to scoring his first goal in tangerine in the game’s first meaningful attack. Eammon Bannon wriggled past Jimmy Nicholl on United’s left and squeezed the ball inside Dave MacKinnon for Coyne who from the edge of the box fired his shot just wide of Peter McCloy’s left hand post. Coyne was involved again, with a beautiful switch of play to Ralph Milne who forced MacKinnon to track him to the by-line and block the cross but United couldn’t take advantage of the resultant corner. As the half progressed Rangers began to enjoy more possession, but Davie Cooper, who was the outstanding player when the sides met at Tannadice earlier in the season, was being carefully marked with Billy Kirkwood and Milne regularly supporting Richard Gough in defending the winger. Milne in particular was diligent in providing cover and denying Cooper the space to create. Milne was responsible for the first shot on target, when Coyne and Bannon combined to switch the play out to the right and Milne drove across the edge of the eighteen yard box to create an opening for the shot on his left which McCloy had to parry before collecting. Ally McCoist had Rangers best chance of the half when he hit the post, beating United’s offside trap on the left, he chested down the clearance before hammering his shot past Hamish McAlpine, but off the near post. Sandy Clark could only direct the rebound over the bar.

McCoist had the first chance of the second half when he met a Jimmy Nicholl cross, beating Davie Narey to the ball, but his header was straight at McAlpine. United struggled to get a foothold at the start of the second period and Rangers had claims for a penalty when Nicholl, who was responsible for driving a lot of the host's play, challenged Paul Hegarty for a bouncing ball but the referee adjudged it to deflect off the captain’s chest before it was cleared. John Holt had United’s best chance in the second half when Bannon laid the ball into his path and from 25 yards out his shot was palmed away for the corner. Bobby Russell saw his shot from the edge of the box, comfortably collected by McAlpine, before Bannon had the last opportunity of the match with time nearly up, he flicked up a clearance and volleyed just inches over the bar from 25 yards out in what was the games only real moment of inspiration.

The much improved Rangers performance would not have surprised United, given the new manager, larger home attendance and increased commitment, but the visitors kept them safely at arms length, without exerting much pressure of their own. Celtic’s surprising 4-2 defeat to St Mirren meant the point lifted United back into second place, three points behind Aberdeen who beat Hearts 2-0. United can reduce the deficit to one point on Tuesday when they travel to St Mirren to play their postponed match from earlier in the season.