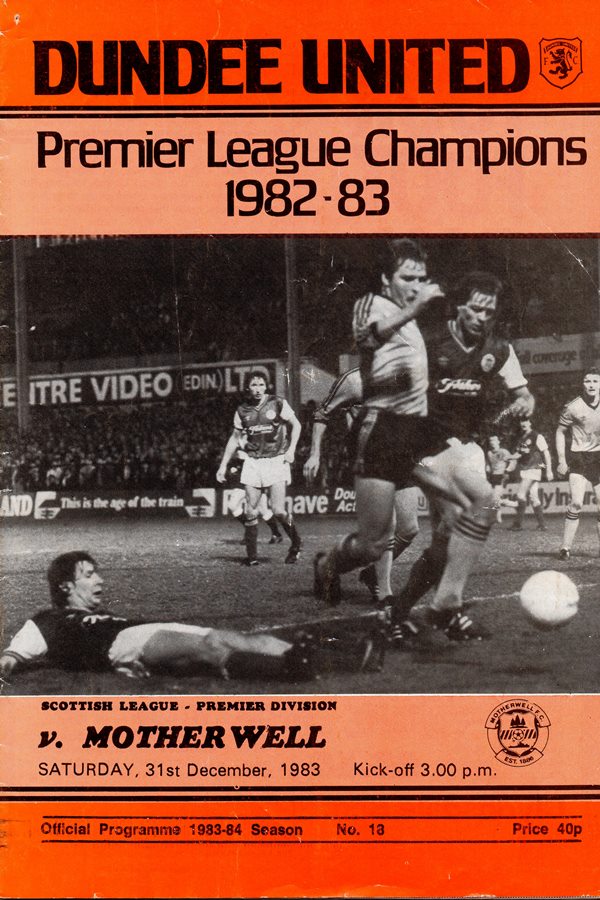 Backed by a howling gale. a Stark strike from 20 yards is all United have to show for their first half efforts against Bobby Watson's men. From Gahagans comer Motherwell equalise with a header, but Hegarty saves any blushes. His header bounces in after Sturrock swings and misses.

The year of 1983 is drawing to a close and without doubt it has provided me with the of my career In seeing the players win the Premier League title. I find it difficult to separate the 1979 League Cup triumph, the club's first major honour, and last season's championship win. On reflection, however, the Premier success just shades it as it is a more difficult competition. The one major disappointment was the exit at the quarter-final stages of the UEFA Cup by Bohemians Prague. Not for the first time we have been knocked out of Europe by a side which if not inferior to ourselves, were at best, no better than us. Hopefully, the New Year will see an improvement in our home form in Europe when we take on the Austrians, Rapid Vienna. 1 also hope that the support at Tannadice can continue to swell in the forthcoming year. Even if the numbers coming to Tannadice can't be increased, I would like your support to be more voluble. I sometimes think that the East of Scotland supporters are too refined compared to their counter. parts in the West. At the end of the day, however, it is up to us to give you something to shout about. Whilst the players have done well over the past year, the last couple of months have been disappointing, exposing our lack of depth of pool. It also showed how lucky we have been in the past with injuries. We may have suffered the same number of injuries, but we have not experienced the loss of so many vital players for lengthy spells before.

Even taking that into consideration, it has demonstrated the real lack of ambition amongst the fringe players. Complacency most certainly exists in the first team squad, and that cannot be allowed to continue. Over the past week or two. I have endeavoured to shake-up the side behind the scenes, but the only pressure that worries first (earners is who is waiting in the wings. Our aim at Tannadice is to improve on last season by achieving two major honours in a season. If that happens it will be partly due to a lack of complacency. It is very doubtful if we will ever have a playing pool that I'll be fully satisfied with but, perhaps, the one thing I most dearly want to see is young players who have the single minded dedication and determination to reach the top in football. Motherwell provide the opposition in our last match of the year and in welcoming Bobby Watson to Tannadice, I must warn him that we are desperate to maintain our League challenge especially after our less than convincing form over the past couple of months. Finally, may I personally wish everyone a Very Happy and Prosperous New Year.