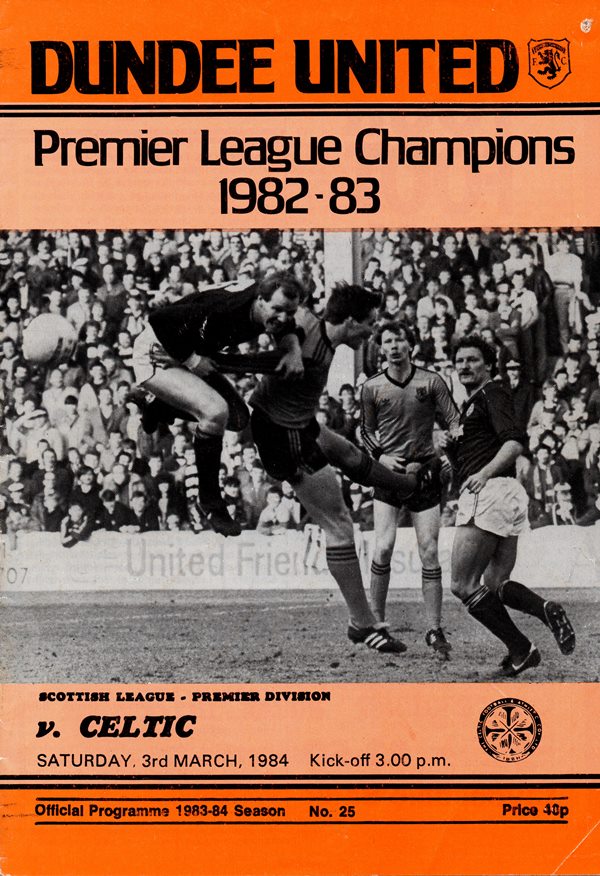 The vital first goal fell to United and was a strike of the highest quality. Eamonn Bannon took a return pass from Paul Sturrock and crashed the ball first time past a helpless Bonner. Paul Sturrock was also the purveyor of United's second goal with a defence splitting pass to Billy Kirkwood who beat Bonner with the assistance of Tom McAdam's leg.

United extended their lead to three following a defensive mix-up. Roy Aitken's pass back beat Bonner, the Celtic skipper himself stopped the ball entering the net but struck the post and Davie Doddswas on hand to net the rebound. Celtic's consolation counter was fittingly scored by Roy Aitken when he poked home a well-flighted Burns free-kick.

After a spate of cup action, we returned to League action last week and it's fair to say that our current League position looks worse than it actually is, particularly bearing in mind the number of outstanding games we have to play. By the same token, the recent form shown by too many of our players has meant that only those taking a very optimistic view would think we can retain the title. Our defeat at Ibrox was a case in point. At no time in the first 45 minutes were Rangers the better side. We had, in fact, gained the upper hand when Sandy dark scored, what, from a Rangers viewpoint, was a very good goal, but a very bad one for us to concede. Too frequently in that match our players failed to close down their attacks, consequently allowing too many crosses to be played into the penalty area. Apart from the disappointments of defeat, it was concerting to see the factors that are so vital to Dundee United playing well so lacking. Our use of the ball by the back four players was pathetic. The front players, on the rare occasions they received reasonable support, failed to control or hold it and the midfield was a'.most non-existent. It was certainly not the kind of performance from Dundee United that I have come to expect, and those three factors were the reasons we missed out on a place in the League Cup-final.

Most fans were probably surprised to see Paul Sturrock on the wing and Davie Dodds in midfield at Love Street, but I felt both needed a respite from the tight marking both normally receive in the hope that the pair will regain their confidence to hold the ball, which seems to have temporarily deserted them. For Billy Kirkwood, last Saturday was an important game as he hit a good opening goal and capped that with a magnificent second. However, that good work was undone, not just by the loss of two goals, but the manner in which they were conceded. Confidence is an important part of the modern game and some people may feel that the players attitude could be complained about but a lot of that is down to a lack of confidence. Unfortunately the current lack of hunger for success has had an affect on performances with the consequent loss of confidence. Today's encounter with Celtic provides us with the ideal opportunity to get back on the right rails and a good result today would provide us with the ideal boost for our European tie in Vienna. We have had some magnificent games in the past with Celtic, and this latest encounter is unlikely to differ especially in view of the League position of both clubs.