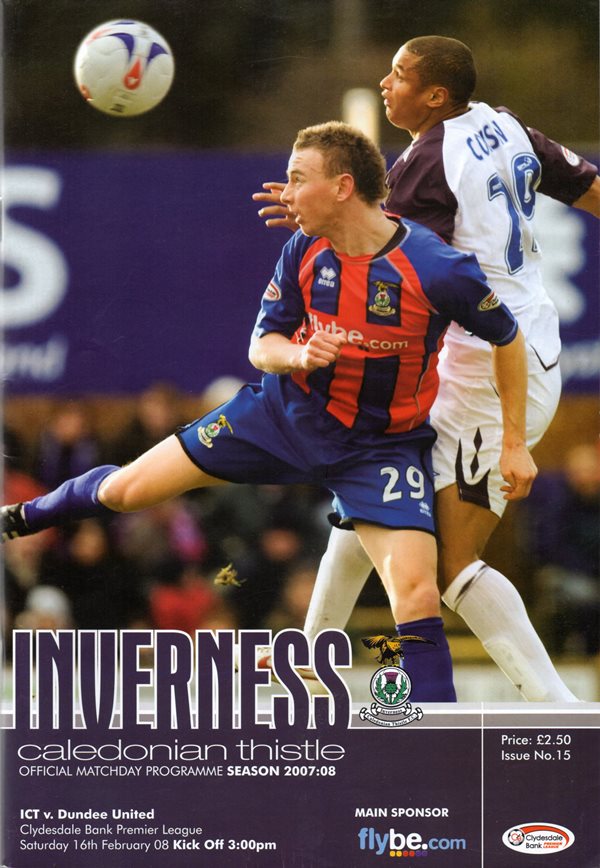 Inverness substitute Markus Paatelainen earned the hosts a share of the spoils with six minutes remaining, after Prince Buaben had opened the scoring for United midway through the second half.

There were two changes for Inverness from the side which drew 1-1 at Love Street last weekend. David Proctor strained a hamstring during the week, but his loss was compensated by the return of Phil McGuire after suspension. Elsewhere, Dennis Wyness missed out as Dougie Imrie came in.

Darren Dods and Noel Hunt were left out of the United starting line-up, with Garry Kenneth coming in alongside Lee Wilkie and Jim O’Brien playing alongside Mark de Vries up front. Sean Dillon and Prince Buaben also came back in as Craig Levein set his side out in 4-4-2 formation.

The first half was a closely contested and fairly tepid encounter. United enjoyed some good possession and played the ball across the pitch well for the most part in difficult conditions with a swirling wind and a very uneven and bobby surface.

It was the uneven surface which played a part in creating the first chance of the game for Inverness. Lee Wilkie played a square ball across the ground for Grainger just inside the United half, but the ball kicked up and over Grainger’s foot. Imrie played it forward down the right, and Don Cowie got into the box, but from sixteen yards out, angled his shot wide of goal.

Prince Buaben got United’s first shot on target, latching onto a loose ball over thirty yards out; but despite keeping his shot down, Fraser had ample time to get across to gather.

Cowie was the main goal threat for the hosts in the first half, and he shot from long range shortly after the half hour, but Zaluska gathered comfortably.

Buaben managed another shot on goal before the break, shooting low to Fraser’s right from the edge of the area after being found by O’Brien, but again the shot lacked the power to seriously trouble the Inverness ‘keeper.

On the stroke of half time, Inverness were aggrieved at referee Stephen Finnie. Richard Hastings’s deep cross was directed towards Niculae, with Grainger fouling the Romanian just outside the area. Finnie played advantage with the ball dropping to an Inverness player; but Duncan pulled his shot wide.

Very quickly after the restart, it was apparent that the game would be a lot more open. Noel Hunt came on to replace Mark de Vries after the break, with Craig Levein trying to share the workload round a number of players who have played plenty of games already this season.

Following an excellent block late on last weekend against Hibs, Danny Grainger popped up with another five minutes into the second half to deny Imrie after Niculae had laid the ball off to him.

Mark Kerr and Ian Black picked up bookings in the second half, before Danny Grainger tried his luck from thirty yards, though his shot lacked power and direction. Danny Swanson came on to replace Willo Flood, and again the youngster showed the flair and balance which has caused him to already make a name for himself amongst the United fans.

Hunt and O’Brien combined well just short of the hour mark, with United earning a corner from a good passing move, before Danny Grainger fired a free kick wide from 24 yards after O’Brien had been pulled back by McGuire. At the other end, Dillon blocked from McBain.

Swanson latched onto a loose ball and danced his way into the area beyond Black who appeared to barge him out the way, but Stephen Finnie wasn’t convinced that a foul had been committed.

Exactly midway through the second half, however, United opened the scoring. The path to goal started from their own penalty area, as they defended a corner. Hunt cleared forward to Swanson, who made up ground before passing and United eventually worked the ball back into the feet of Hunt on the edge of the area.

Hunt turned away from his defender and, from the right edge of the penalty area, powered the ball across the face of goal, where Buaben did the rest by tapping into the net.

Zaluska saved well from substitute Graham Bayne shortly afterwards, and McBain wasted a good opportunity after being put through behind the United defence by a defence-splitting ball from Cowie.

United had good performers all over the park, but they were denied the victory by an equaliser six minutes from time. The ball was crossed in from the right for Bayne, who didn’t manage to connect, but Paatelainen had also come into the back post area and was well positioned to steer the ball beyond Zaluska.

It was end to end stuff in the closing stages as both sides chased the win, but Inverness came closest as Garry Kenneth had to head off the line in the final minute.