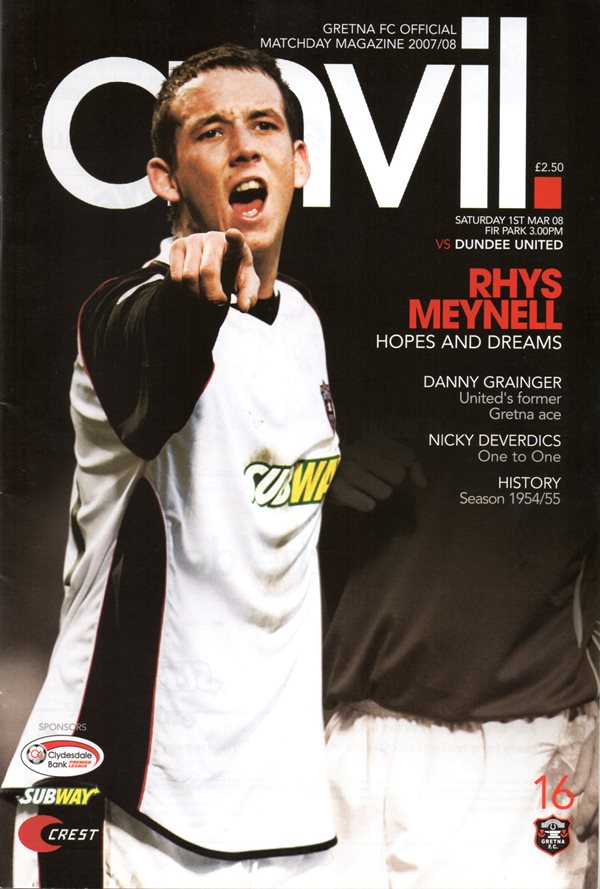 Goals from Garry Kenneth, Morgaro Gomis and David Robertson ensured that United eventually picked up a win against Gretna in the Premierleague. Lukasz Zaluska – who had very little to do – also played a crucial part with a good save to deny Skelton an equaliser early in the second half.

Craig Levein made no fewer than five changes to the United side however. Garry Kenneth, Christian Kalvenes, Prince Buaben, David Robertson and Jim O’Brien came in, while Danny Grainger, Mark Kerr, Danny Swanson and Mark de Vries dropped to the bench and Lee Wilkie wasn’t risked at all.

Despite earning their first corner within three minutes, United didn’t really threaten until the fifteenth minute, when they broke they opened the scoring.

A corner from the right was flicked on by Noel Hunt in front of goalkeeper Fleming. Dods crashed a shot off the crossbar, and as a scramble was set to ensue, Kenneth got up to loop a header over the reach of Fleming and into the net.

The ‘home’ side earned a corner midway through the first half, and from Kissock’s set piece, Chris Innes got up to put a header wide. For the remainder of the half, however, it was Greg Fleming’s goal which came under increasing pressure.

A wicked cross from Kalvenes in the 26th minute found the typically well-timed run of Robertson, but the diminutive midfielder couldn’t get enough contact to guide the ball on target. O’Brien then volleyed wide from long range.

The overlapping Kalvenes was providing plenty of width, and another cross from the Norwegian saw Hunt shoot on the turn and force a save from Fleming.

A change of personnel and formation at half time almost paid immediate dividends to Gretna five minutes into the second half.

Naughton’s cross from the left was half-cleared by Buaben but the ball broke for Gavin Skelton to drive powerfully towards the bottom corner. Zaluska, however, was equal to the task and showed good quick reactions to get down to block.

The concession of an equaliser may have changed the game, and the importance of Zaluska’s stop was emphasised seconds later when United doubled their advantage.

Hunt’s pull back into the area from the right was intended for the unmarked O’Brien, but after a fresh air swipe from him, Morgaro Gomis, met the ball in a central position and found the bottom corner with a right foot strike.

Dillon almost added a third immediately, Fleming scrambling to touch his deep cross onto the post. Hunt was then denied by good defending as he sought to meet Robertson’s cross from Robertson. Flood and Hunt were both unsuccessful from long range, while at the other end, McGill beat Zaluska to Murray’s hopeful ball forward, but the Gretna man’s effort didn’t have the pace or direction to find the target.

The third goal came after 64 minutes. Hunt’s mis-control allowed Kalvenes to whip in a perfect cross, and a trademark David Robertson run allowed him to volley home.

Flood then hit the woodwork from a wide position, before substitute Craig Conway’s deflected cross was turned behind by Fleming as United threatened to run riot.