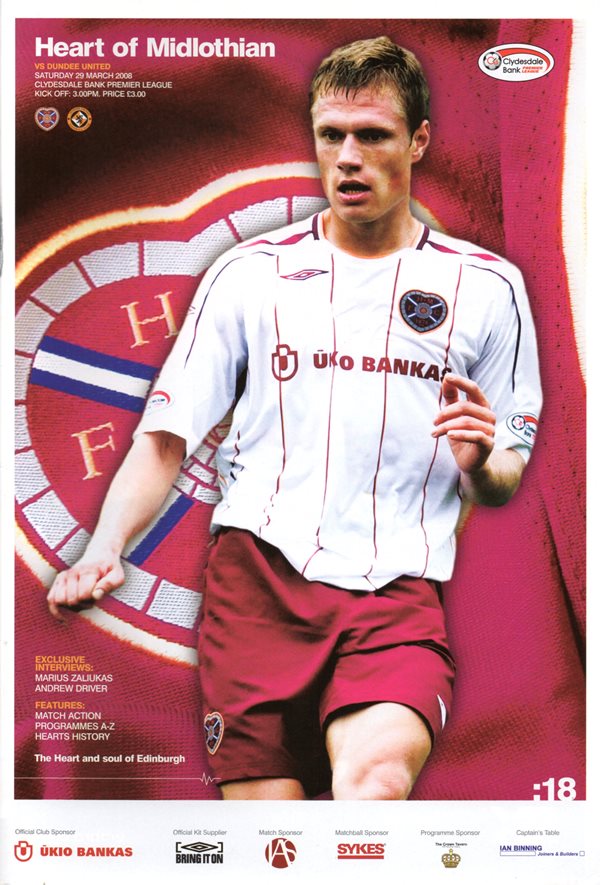 United endured a frustrating 90 minutes at Tynecastle this afternoon, with Laryea Kingston’s 27th minute goal earning Hearts a vital three points as they pursue a top six place. United will rue the fact they dominated the first half and missed a glorious opportunity to take the lead. But having fallen behind, an equaliser looked increasingly unlikely as the second period wore on.

United carried on in their trade-mark 4-5-1 formation, Conway replacing O’Brien from the side that defeated Motherwell last week. Hearts made four changes following a disappointing draw at home to Falkirk, and elected to match United man for man with their own 4-5-1 set-up.

Goalkeepers were only intermittently called into action in the first half – not so much because of lack of quality crosses, but more because there were not enough players getting into the box to convert – Kingston providing for Hearts, and Flood and Kalvenes for United. On the whole, though, United’s central midfield of Flood, Kerr and Gomis were in complete control, and the visitors should have taken a deserved lead on 19 minutes. Flood was released on the left by Gomis; the midfielder’s low cut back was left by De Vries allowing Hunt a clear sight of goal from eight yards. A first time shot would surely have hit the back of the net but the striker seemed to stumble at the vital moment, and his follow up shot spun wide. United were made to pay a heavy price eight minutes later. It all looked a little too easy as Jonsson’s pass from inside his own half sent Kingston clear of United’s rearguard. He burst into the box, shaped to shoot across goal but deceived the keeper by sending a powerful shot into the net at the near post.

If anything, United’s grip on the game increased between the goal and half time and despite their side’s lead, it was clear the home fans were unhappy with the amount of possession and territory the visitors enjoyed. But while pinned back for long periods, Hearts looked just as likely to score, with United frustrated by a solid showing from Hearts’ back four. Indeed four minutes before the break Palazuelos picked out Mikoliunas with a cross, but the Lithuanian’s header from eight yards was well saved.

There were no personnel changes at half time, but Hearts started the second period less timidly and Zaluska again did well to block a powerful Nade shot from ten yards. At the other end a fine last ditch tackle from Berra stopped De Vries converting Kenneth’s through ball, and from the resulting corner Basso took two attempts to gather from Gomis’s 20-yard shot. Hearts should have stretched their lead on 59 minutes. Kingston robbed Kenneth before sending in a low dangerous cross from the right. Zaluska blocked the ball only as far as Mikoliunas – but with the goal gaping, the midfielder managed to scoop the ball over from 8 yards.

United adopted an increasingly attacking line-up with Swanson and later O’Brien and Daly joining the fray. Hearts looked to hold on to their lead with Ivaskevicius and Wallace introduced. But as the clock ticked away and United became more desperate to press forward, in truth they looked increasingly unlikely to score. For Hearts, Stewart almost converted Palazuelos centre from the left, and Neilson hit the post with a cross as the game entered the last ten minutes. Basso was little more than a spectator in Hearts’ goal as United’s frustration got the better of them. Kenneth picked up a second yellow for a challenge on Nade. In injury time Swanson was shown a very harsh red card for a clumsy tackle on Jonsson which did not seem any worse than the tackle which earned Ivaskevicius an earlier yellow.

Unfortunately, though, it was United’s failure to capitalise when in complete control during the first half that cost them. Having gone behind, it was an uphill struggle to get back on level terms, with that little spark of inspiration or burst of pace in the final third eluding them.