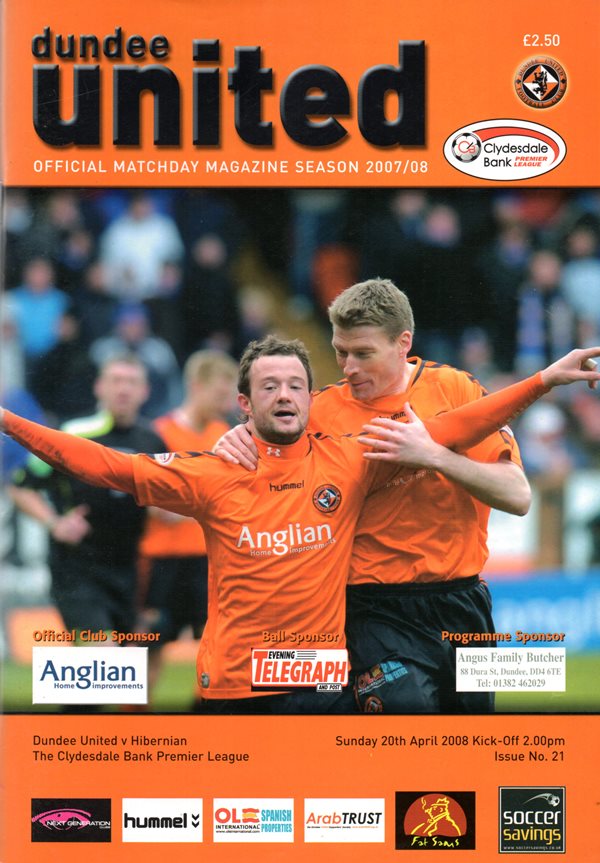 Dundee United and Hibernian settled for a share of the points in an exciting encounter at Tannadice in the SPL.

Dean Shiels opened the scoring for Hibs with a fine solo effort in the 57th minute after rounding Lukasz Zaluska.

Three minutes later, the balance was restored when Noel Hunt converted from the spot after Mark de Vries was felled by Thierry Gathuessi in the Hibs box.

Despite some end-to-end stuff in the dying minutes, neither side could find a winner to push them up the table.

After a pacy start, both sides settled in and Hunt almost opened the scoring in the ninth minute with a looping header from the edge of the penalty area, but Andrew McNeil got a finger to it and tipped over.

Hibs replied quickly at the other end with a flurry of corners, but failed to take advantage of the early pressure.With 15 minutes played, Martin Canning leapt above United's defence to send in a close-range header, but watched his effort sail over.Five minutes later, Hibs' Steven Fletcher seemed certain to head for goal after he broke free on the left-hand side, but Sean Dillon was on hand to block.

De Vries posed a constant a threat on the Hibernian goal in the early stages, but despite a slew of solid efforts, he was unable to break the deadlock.
With 30 minutes on the clock, Merouane Zemmama drifted wide on a mazy run but ran out of steam at the edge of the United penalty area.
10 minutes from half-time, United's Willo Flood tested McNeil with a right-footed drive from long-range, but the former Southampton keeper pulled off another fine save to tip the ball over the bar.

As the half-time whistle approached, both sides continued to push for an opener, and Hunt came close with a curling free-kick in the 42nd minute, but it remained goalless at the interval.

Shortly after the break, Hibs found themselves pinned back as United enjoyed a spell of early pressure, but with few gaps at the back in either half, it looked like being a long afternoon.

In the 55th minute, Fletcher sent a high switched ball across to Zemmama on the right, but the Moroccan midfielder ballooned his shot wide.
Two minutes later, the stalemate was broken when Sheils broke free on the counter-attack and outran the United defence to round Zaluska and confidently bury the ball in the back of the net.
Undeterred, United pressed for an equaliser and their efforts were rewarded almost immediately.

Referee Eddie Smith pointed to the spot when De Vries was naively manhandled by Gathuessi inside the Hibs penalty area and Noel Hunt stepped up to convert the kick.

Fletcher tried an ambitious overhead kick in the 64th minute, but McNeil was never in doubt in the Hibs goal and smothered comfortably.With goals on the scoresheet, the match soon picked up pace and both sides looked keen to secure a winner.Fletcher could have nabbed it for Hibs in the 74th minute when he broke free and went one-on-one with Zaluska, but was thwarted by a fumbled save with the final ball.United responded quickly through Daniel Grainger, who came similarly unstuck inside the Hibs penalty area with a shot aimed straight at McNeill.

Dodds was lucky to escape a red card when he deliberately felled Fletcher on the edge of the penalty area with eight minutes left on the clock, and Zemmama's resulting free-kick shaved the United post.

A late spark of action from United in injury-time looked promising,with Grainger sending in a tantilising free-kick that narrowly drifted wide of Zaluska's left-hand post.