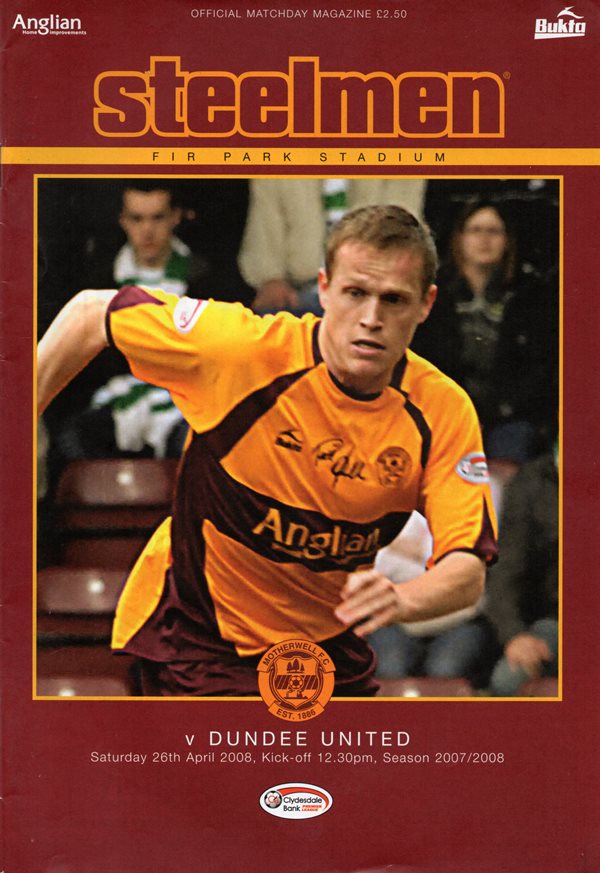 United brought in Grainger for the injured Kalvenes, and Daly replaced De Vries for a game which United could not afford to lose. Motherwell had not played since a heavy home defeat to Celtic two weeks ago, but welcomed back Malcolm and Clarkson from suspension.

On a bumpy pitch and amidst sunshine, showers and a blustery wind, United managed to take control of the game in the early stages. Inside four minutes Smith did brilliantly to get his fingers to Willo Flood’s 30 yard drive. Daly was next to try his luck from 20 yards, but was well over the bar. As the pressure built, Flood, Dods and Flood again all had shots charged down as Well struggled to clear. A mistake by Hammell allowed Flood a clear sight of goal on sixteen minutes, but this time the midfielder was off target from 18 yards. United were quickly punished for failing to turn their supremacy into goals. Out of the blue a clever Stephen Hughes cross from the left was met first by Clarkson and then by Porter, who nodded home from close range.

The goal gave Well a lift and Porter had another decent chance soon after but shot straight at Zaluska from 15 yards, under pressure from Grainger. United responded again through Flood, but although his free kick from 20 yards had power, it was comfortably gathered by Smith. United had another scare when Hammell’s long ball seemed to hold up in the wind, causing Zaluska to go beyond his penalty box and the ball – but before Porter could pounce, the keeper recovered. With half time still ten minutes away United upped the pressure again. A Hunt shot was blocked for a corner, and Flood’s flighted set-piece picked out Wilkie who headed inches past from six yards. Motherwell looked like they were going to coast to half time from there, but United got a deserved slice of luck when Stephen Craigan headed beyond his own goalkeeper after Hunt had got on the end of a Gomis cross.

With all to play for, Well made the first change at half time – Fitzpatrick replacing Hughes – and the home side took charge as the second half got underway. Zaluska again recovered well having spilled a high ball at Porter’s feet. But Motherwell were ahead again on 50 minutes. Clarkson won the softest of free-kicks near the goal line on the left from which McCormick blasted an unstoppable free-kick across goal and Porter converted at the back post, from no more than a yard.

United struggled to get back into the game, which became scrappier as the conditions and the pressure of the occasion took their toll. With just over fifteen minutes left, a fine move released Dillon on the right and his driven cross was just inches too far in front of the onrushing Hunt. Lasley was just over with a drive from 30 yards as Motherwell continued to look dangerous on the break. Several yellow cards were shown as the tension built, and the game reached its dramatic climax with just four minutes left. Grainger’s long throw from the right eventually made its way to Wilkie and the captain’s header dropped into the net to the delight of the visiting fans behind the goal.

There was still one last moment of drama as Dillon was robbed of possession on the half way line allowing Clarkson to feed Lasley through on goal. But the substitute sliced his shot wide from twelve yards, and United got the point which overall they deserved.