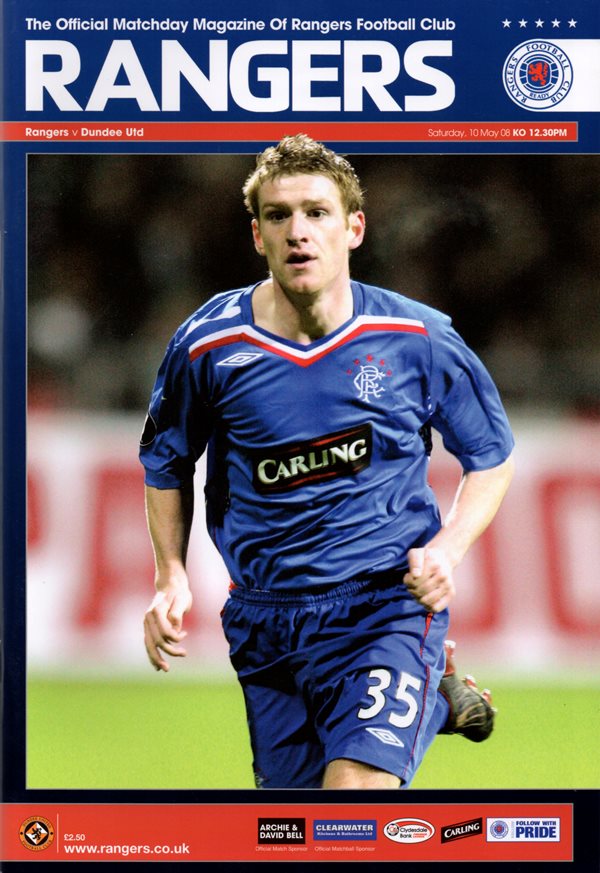 Despite a resurgent, battling display in the second half, Dundee United went down 3-1 to champions elect Rangers this afternoon, in a result that effectively ends any hope of European football returning to Tannadice next season.

At 2-0 down, Craig Levein’s side were subject to two controversial refereeing decisions, which saw them denied a clear-cut penalty, and disallowed a legitimate goal.

Minutes into the second half, and trailing by two first-half Nacho Novo strikes, Noel Hunt was bundled over by David Weir in the Rangers box for a stone wall penalty. But referee Michael McCurry unbelievably waved play on.

With 20 minutes to go, United were again on the wrong end of a controversial decision, when Danny Swanson’s 30-yard drive ricocheted off David Weir to trundle past a helpless Neil Alexander in the goal. The linesman flagged for offside, indicating that the ricochet had come off David Robertson who was in a marginal offside position.

However, this was clearly not the case but controversially, the referee then adjudged that Robertson was instead interfering with play and chalked off the goal.

With 15 minutes to go, Mark de Vries powerfully headed home from eight yards to give the small but noisy band of travelling Arabs hope.

However, the goal would ultimately turn out to be nothing more than a consolation, and arguably the damage was done after twenty minutes when Nacho Novo stroked home his second goal.

After Noel Hunt missed an early chance, United fell behind after just five minutes when they conceded a free-kick deep inside their own half. Kevin Thomson’s cross was met by Nacho Novo who poked the ball inside Zaluska’s left-hand post.

And before the 20 minute mark the home side were two up, after Novo again fired home.

He latched onto a long ball and, from the corner of the box, whipped the ball across the hapless United goalkeeper and into the back of the net.

Just before half time United gained the upper hand and a net bound David Robertson was headed clear with Alexander off his line before a poweful strike by de Vries was well saved by the keeper.

Entering the tunnel 2-0 down, the statistics suggested United would struggle to take anything from this game, and it proved to be the case. Rangers have now led at half-time in 20 of their SPL matches so far this season, and have taken maximum points on every occasion.

As if that was not ominous enough for Craig Levein during his half-time team talk, before today, United had trailed at half-time in 10 of their 36 league matches so far this season, and failed to take a single point in any of those games. And that record continued as late substitute Jean Claude Darchville slotted home from a Barry Ferguson cross in injury time to put the game beyond United.

But United turned a flat performance in the first-half around to produce a rousing display, particularly in midfield, in the second period.

Had the two decisions early in the second half gone the visitor’s way, United could have taken at least a point from Rangers, who have only dropped points once this season at home, back in October last year when Hibs took all three points thanks to a David Murphy strike.